yes we love to see a-yuan picking up wwxs habits but what about jin ling??

going by the untamed, i hc they have to see eachother more often than they normally would. especially with lwj being the chief cultivator and wwx living in cloud recesses!!

he definitely picks up wwxs habit of brushing his nose when he thinks about something (when he does slow down and think, that boy is fiery). cute, yes, but imagine it’s JC who notices first.

now that is painful.

I’m sure variations on this idea already exist, I’m just broken re: reading right now and can’t go looking, BUT.

I’m very intrigued by yunmeng sibling tragedy potential, and I’m very curious about a couple of variations on a theme.

One, what happens if Jiang Cheng tries to sacrifice himself to protect Wei Wuxian, and instead of a little light torture, the Wens go for a full-blown execution? What if Wei Wuxian sneaks back into Lotus Pier, and doesn’t have a brother left alive to rescue? Now, he’s got extra grief and anger to deal with, but also no impetus to sacrifice his golden core.

Or! What if Wei Wuxian just… doesn’t make it through the golden core transfer? I could go for a number of variations on that idea (what if jiang cheng has the core and wei wuxian is dead? what if the core transfer DIDN’T work and wei wuxian is dead anyways?) and the aftereffects branch in a LOT of potential directions. Does Wen Qing tell him? Does she tell him as herself, or cosplaying Baoshan Sanren? How much is a grief-stricken Jiang Cheng going to lash out against either an ambiguous love interest/political enemy, or against a total stranger, telling him his brother is dead, when his brother is supposed to be safe, back in town? Just how bad is this going to be, and how much is he going to be able to scrape himself back together afterwards? It wouldn’t change the early stages of the war, but it could very significantly affect the endgame, and it would leave everyone without a convenient demonic cultivator scapegoat to blame for all their problems.

(and of course, a variation on this is that they BOTH die, and wen qing has to find a way to tell jiang yanli what happened)

(and additionally, there’s tasty potential in a world where the transfer works, wei wuxian gets thrown in the burial mounds… and never comes back out. maybe someday jiang cheng leads an expedition in there and finds a skeleton and the remains of some red and black robes)

Also, i would be remiss if i left out the possibility of Jiang Yanli being killed while her brothers were taking turns with the big dramatic attempted sacrifices. I don’t WANT to consider this possibility, but do consider how deliciously devastating it would be for Wei Wuxian to come back from Lotus Pier, or for Jiang Cheng to come back from the mountain, only to find their sister gone. I feel guilty for even mentioning it, but I am FASCINATED by how much it would shatter them!

No big conclusions here, I was just handed a family stuffed full of people who suffer beautifully for their loved ones, and… I just want to see how much they’re capable of hurting :3c

Everytime I see this:

And I’m like ah, so simple! Just try to do the right thing and save the lives of a bunch of people and accidentally invent a whole new way of cultivation that no one likes so everyone but a select group of people hate you and want to kill and YOU TOO CAN LOSE WEIGHT!!! 😃👍😃

i ended up on Mo Dao Zu Shi tiktok, then i had to read it for context, and now im caught up on the manga (ik thats not the word but i dont remember the other word for it rn), and am watching the anime,,,and like,,,I HAVE NO ONE TO TALK TO ABOUT THESE BEAUTIFUL MEN WHAT DO I DO

#Mo Dao Zu Shi, #tiktok made me do it, #the grandmaster of demonic cultivation
0 notes · See All
multifandom-disasterText

ZiZhen: What does it’s said?

SiZhui: Umm, breath if you think A-Yuan is cute.

JingYi: SiZhui, can I ask you something?

What do you do on your last day as a sweet 19 year-old? Reuploading yesterday’s artwork and then adding a piece of a sweet spirit comforting a Lan Wangji for art sake… seems to be a reasonable answer. 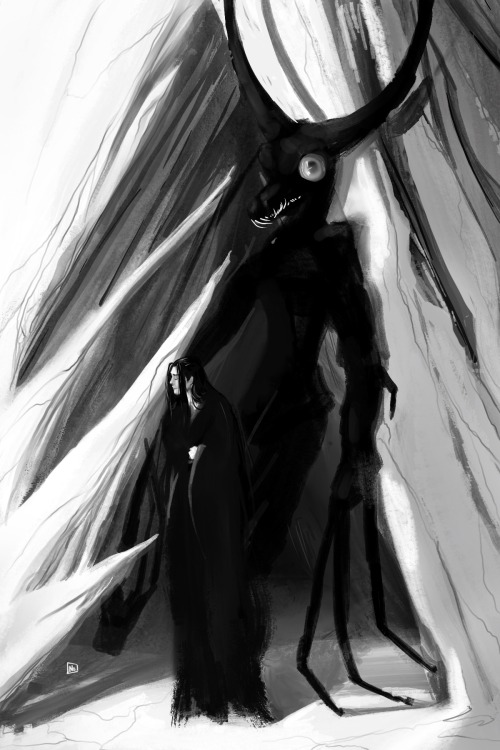 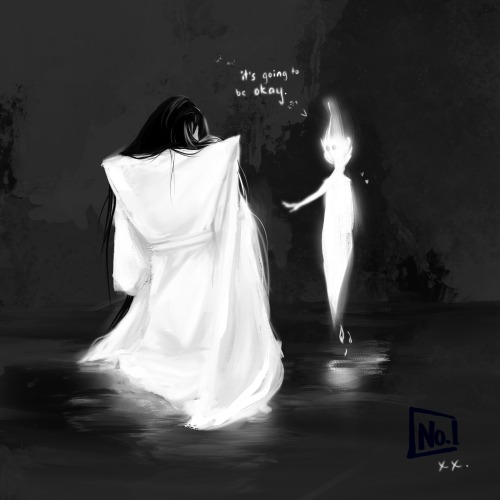 #mdzs, #mo dao zu shi, #the grandmaster of demonic cultivation, #the founder of diabolism, #theuntamed, #cql, #mdzs art, #mdzs fanart, #wei wuxian, #lan wangji, #I was going to draw Lan Xichen cause Thenumberonerubbish adores him, #The drawing didn’t fail, #i failed him, #to say the least, #arrr, #I don’t like aging but unfortunately all we do is age, #least we have sweet spirit to cure the pain, #take one free comfort from sweet spirit, #trendingtrash, #I took yesterday’s artwork down cause I didn’t want to flood any dashs’
29 notes · See All
eeeeexclamationmarkText

i feel personally robbed that we as an audience did not get a front row seat to just how down Wei Wuxian was to make nice with dead folks. that one peek of the lady in red when he was murdering Wen Chao’s ass was not enough, especially since they left out the cuddling in that scene, and Wen Ning and A-Qing don’t count because for some reason those two weren’t considered dead (somehow) unlike in the novel where they are so dead that every other sentence conveys the way that being dead impacts their day. i want him gossiping with giggling girl ghosts and handfeeding little ghoul children and whispering secrets with partially emerged corspes from the grave! i need more friendly neighborhood necromancers on my tv screen!

#the untamed, #the grandmaster of demonic cultivation, #eli does fandom, #i hunger for the slippery veil between dead and living to be pulled down and used like a hand towel
11 notes · See All
blacksmithfromqingheText

Liang Tai adverts her eyes, she’s never been good with people: “It’s really nothing, I’m glad you like them.”

Seeing him and the verge of crying again, the two of them looked at each other.

With one glace, one thing was clear for both. They chuckle a bit, Liang Tai suppressed it immediatly while Yu Lin muffled it with her sleeve.

Yu Lin continued: “WE are the ones who owe YOU, Young Master Wen. From the moment I got lost in the fog and then found you in Nightless City, you’ve been nothing but kind to me (even after I accidentally disrespected you because I didn’t recognize you) and after you found out that it was A-Tai that cursed you-”

Liang Tai cut in: “-which I’m still very sorry about. But I’m happy the salve seemed to have worked.”

Yu Lin took a moment to look at her friend, proud of her (‘A-Tai is talking a lot today!!’) and then turned back to Wen Chao, continuing where she was cut off: “Even after all of that, you still are nice and friendly with us!

I’m well aware that there always will be people that won’t like you and they’re entitled to their feelings, but rest assured, Young Master Wen, that the two of us will always be your friends!”

“WELL YES OF COURSE WE’RE NOT FORCING YOU TO BE FRIENDS WITH US. Just. You know. Would be nice. Only if you want to.” Yu Lin finished, in a slightly panicked tone.

mingqing, bc big and angry + smol and angry is such a valid dynamic, also lotus pier bachelor tricked me into that ship 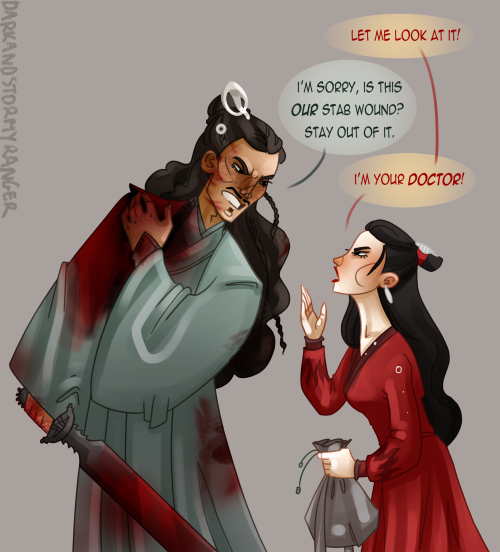 hell to the liars by london grammar 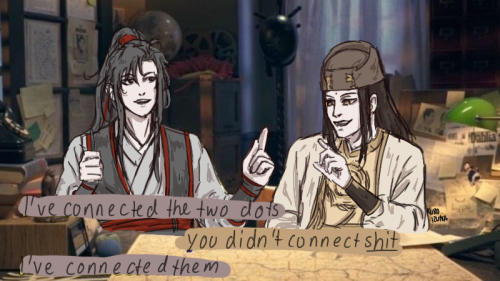 …. so like what if Wei Wuxian…. had remained alive and well on burial mounds….

Have a lovely day!

This is a music video centered around the impact Wei Wuxian (unknowingly) had on Lan Wangji in their younger years - in large part due to the considerable effort he put into impressing him and attracting his attention. The lyrics on their own are darker than they ended up being in the context of this video. Instead, it’s more bittersweet here, as Wei Wuxian comes to realize the depth of Lan Wangji’s regard for him and what he went through because of him.

Why am I alone?

I’m all alone, I need someone

I need someone right now

- Lan Zhan is helping ghost Wei Ying to get better 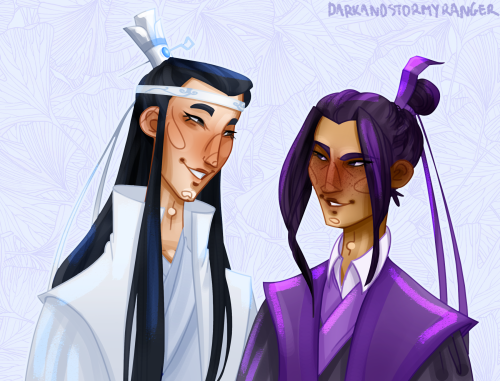 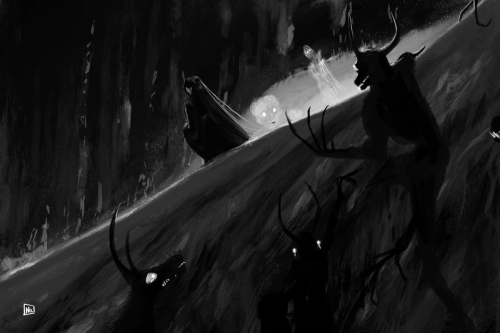 #sksks was gonna be moody and a friend was like: I’ve got a caption for you, #mdzs, #mdzs art, #cql, #the untamed, #the grandmaster of demonic cultivation, #the founder of diabolism, #wei wuxian, #wei ying, #back again with an addition to the demon series, #not entirely happy with how this turned out, #it kinda makes me disappointed, #but I couldn’t find a reason into why, #so I post, #trendingtrash, #yiling patriarch, #yiling laozu, #I think it’s because it reminds me of my oldish work, #and I’ve been pleased with my newer work more, #mdzs fanart, #demon series
64 notes · See All
Next Page