Humans are fickle things, unable to fly or shapeshift. They can’t even communicate telepathically. But then how did they create a weapon so powerful that they can control human minds? It’s impossible, yet these weak, brittle mortals have accomplished just that.

Yes, Leonardo da Vinci did escape from Elysium and reveal a few secrets, and yes, Albert Einstein did crack into the control department of an existential being, but those are small accomplishments, barely overcoming the hurdle that is evolution.

But until Walt Disney came along… everything was fine.

The gods had guarded their secrets, only letting children believe that the red man at the poles, Santa Klaus, was real, only letting slip a few hints about the Tooth Fairy, the Easter Bunny, Krampas and Jack Frost, until Walt Disney, that accursed man, dreamed.

He dreamed of a land where anything is possible, where mice talk and women have ice powers, where snakes hypnotise and elephants fly, where humans of all ages could be happy, without a care in the world.

This man is powerful, the gods thought. He must be stopped.

So they sent a disease. But the man shook it off and kept dreaming.

So they sent grief. But the man, curse him, shrugged it off and kept dreaming of joy, and peace, and laughter.

They listened, and laughed at the mouse with a steamboat.

They listened, and cried when the young girl fell into endless sleep.

They listened, and dreamed about their Prince Charming.

The gods were in more disorder than they had been since the Black Plague.

This was an infraction.

They had to stop this.

So they killed Walt Disney, knowing that the happiness would stop.

But it didn’t. It only rose.

It rose with lions and hyenas, and it rose with a little blue alien and a Hawaiian girl.

It kept rising, and it didn’t stop. The gods were in disorder. So they called a vote. They would send a deity to earth to stop this hate. So they chose a horror goblin, one of the creatures of hell.

The goblin went to earth and conjured up images of a man and a tiger.

But the mortals took that idea and created a story about a boy and a bear, and a snake. And their plans were foiled as the sadness of the real world fell away and shattered, making way for stories that would change the universe.

Stories of an ice queen and a sister.

Stories of a skeleton and a rag doll falling in love.

Stories of ohana, stories of love.

Stories that began with a man and a mouse, but grew into so much more.

Stories that changed our lives, first with a young woman with singing mice, then with faith and trust and pixie dust, then with a sleeping maiden, and then with a story of two brothers who love their father, and finally with a man finding his way back to life.

Stories that are who we are.

Stories that create us.

Stories that defied the gods and spread warmth and happiness to the darkest and saddest of places.

Stories that rise higher than the second star on the left, and ring louder than the bells of Notre Dame.

Stories that warm a frozen heart, and remind us of the place where lost things go.

Stories about a cat and a dog in New York, about a pirate and a special compass.

Stories that began with a man

Hello everyone! Chapter 44 (and the season finale) of “Helga Unbound” is officially LIVE on both FFN and AO3! I have also released the official dates for the next season release dates. Please lemme know what you think!

You know how I’m always saying I’m super behind on everything? Here’s a funny example:

It just occurred to me the other day, while going through my DVD/Blu Ray collection, that despite having been vocal in the past about “Oh, poor Hey Arnold, never got a conclusion,” and so on, that The Jungle Movie has actually been made and out for three years and I still hadn’t gotten around to watching it. So, y’know… I watched it. Finally. Some Hey Arnold fan I am, right?

It was good! …Well, for a conclusion to Hey Arnold, anyway. I can see why it was hurt ratings-wise. As a stand-alone movie I can imagine it’d be confusing as all hell and feel like a massive rushed exposition dump. But as a conclusion to a beloved ‘90s television cartoon 20 years in the making? It was fantastic and well worth the wait. A+, 10/10, would recommend.

Also, now that I seem to now be on a Hey Arnold kick thanks to this, I feel like I must ask: should I change my Arnold x Helga tag? Because everyone is using “shortaki” and I’m just sitting here with “ice cream” melting in my fucking blog. (Puns!) I don’t even remember where I got that name from. …I mean I know what it’s referencing (there’s like one episode where Helga and Phoebe use “ice cream” as a code for Arnold or something, my memory’s kinda hazy), but I swear it was a thing once? I mean I can’t be the only one to have called this ship “ice cream.” I’m not that creative with ship names. And yet I can’t find any evidence that this was a thing once. Is this the Mandela effect? Have I hopped dimensions?

I mean it probably doesn’t matter because I don’t make very many Hey Arnold posts anyway, and if you want to talk about outdated tags on my blog just look at all my “dangan ronpa” tags. And I do like my personalized tags (see “everybody loves barry” and “jill sandwich”). …Eh, maybe I’ll keep it for now. Confuse some people. That’s always fun.

Hey everyone! I’m sorry that I’m a week late, but hopefully this extra-long chapter will make up for it. Chapter 42 of ‘Helga Unbound’ is officially LIVE on my FFN and AO3. Be sure to leave me a review with your thoughts!

Next Chapter to be posted on DECEMBER 26th!

So glad that now we can have:

I’d love for us just to have some follow-on episodes post-TJM….likes even if they’re just shorts.

Ah, yes, Saturdays are for cartoons and for existential crises… 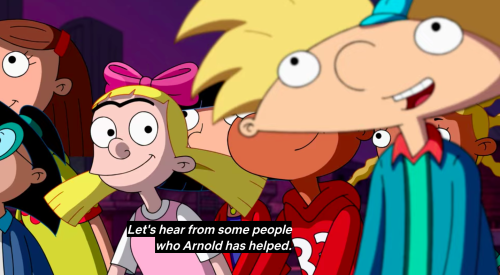 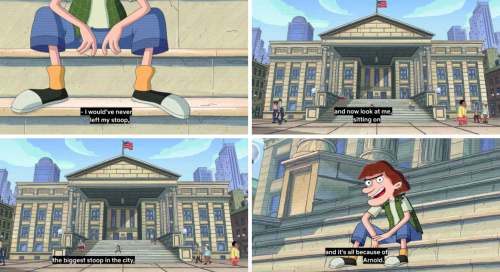 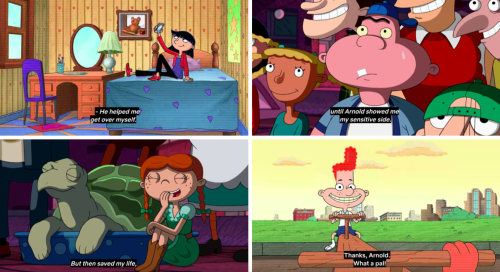 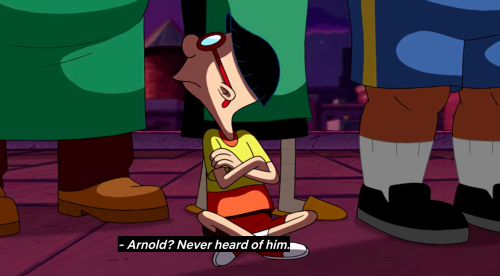 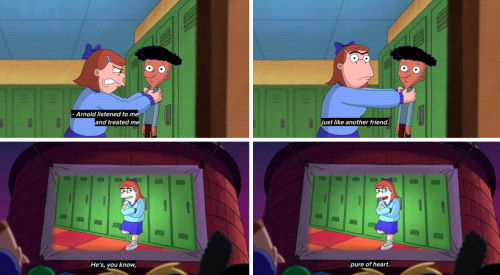 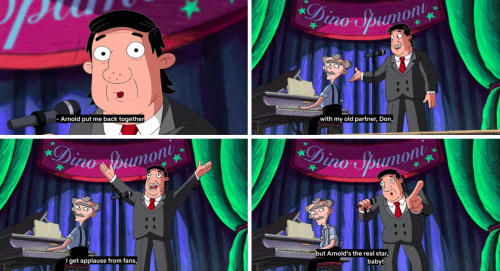 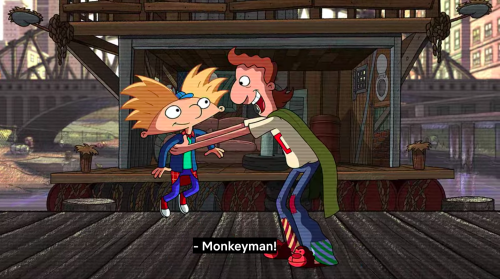 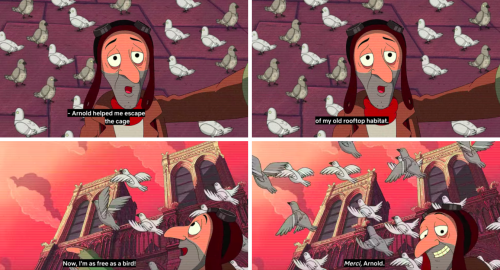 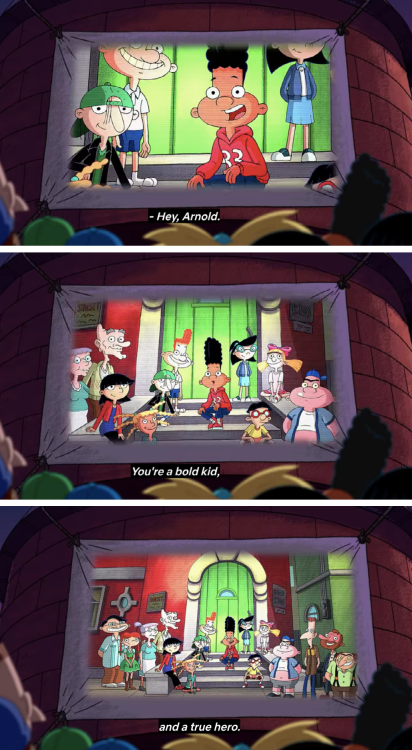 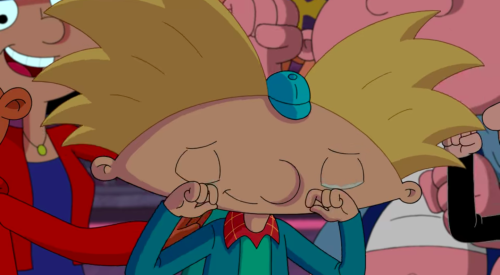 From Hey Arnold: The Jungle Movie (2017): Top image is a screengrab of Arnold’s POV of a map that unfurled at his feet at a dramatic moment of a chase sequence.  In animation production terms, such an object is considered a prop and is usually assigned to a junior design staff artist or freelance designer.  However, like so much else on this show, it is a prop weighted with over 15 years of Hey Arnold mythology.

The 2nd image shows the detail we had to put on this topographical map.  It had to correspond with the routes and destinations of Arnold’s lost parents from the episode The Journal (2001). It had to withstand freeze-frame scrutiny by fans (which I include myself and Craig Bartlett).  Final design art by artist Jonathan Renoni.

The 3rd image down is a screengrab from the end of Hey Arnold episode The Journal. When Arnold peels 2 stuck together pages inside his father’s journal and reveals the map whose purpose we don’t reveal until 15 years later!  This one is based on a watercolor by creator Craig Bartlett himself.

The 4th image down is a screengrab of the first scene of Hey Arnold: The Jungle Movie.  Setting it as the touchstone that connects The Journal to its resolution (FINALLY!) we made a CG version that tumbles to camera and opens to reveal the map.  Thanks to Chris Evans and his CG crew for this and all the other CG elements.  See this scene in motion in my following post.

Finally, the bottom image is the commemorative Journal giveaway at Nickelodeon’s premiere for the Movie in 2017.  A cartoon prop made flesh!

Conclusion: Even the humble prop is important in animation and sometimes have very important context.  They can be iconic to the story being told! 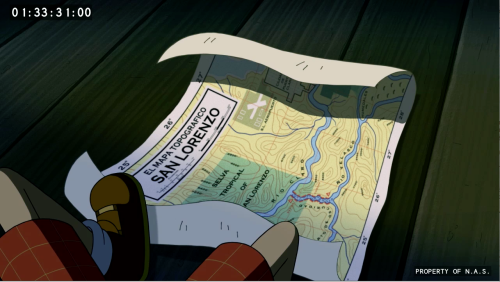 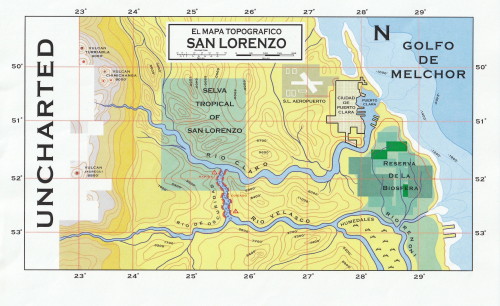 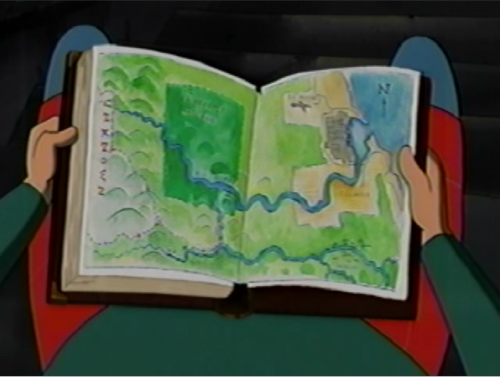 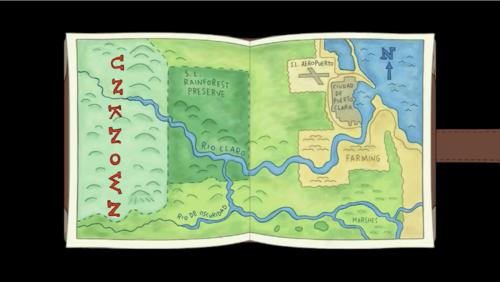 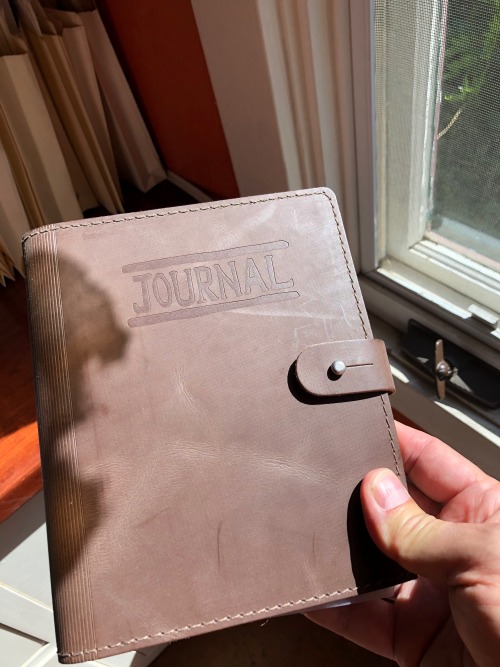 The evolution of the Green-Eye Girl Queen. My early sketches of her in 2017 (showing my love of post-its) and the eventual finished designs probably done by Jerry Richardson in 2017.  Originally a boy, I credit Craig and the writers in changing her to a girl so Helga had someone to compete with and be jealous of. 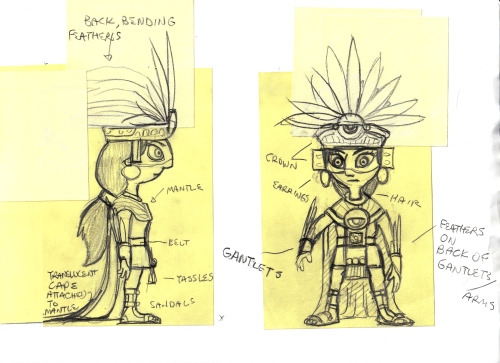 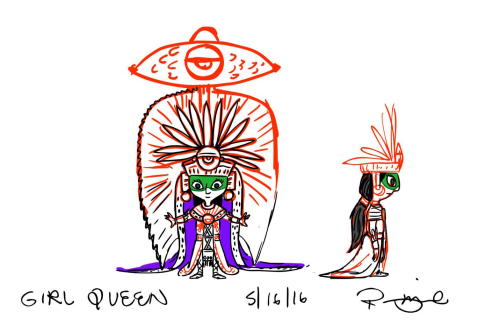 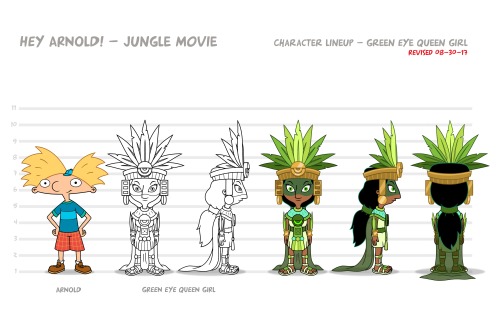 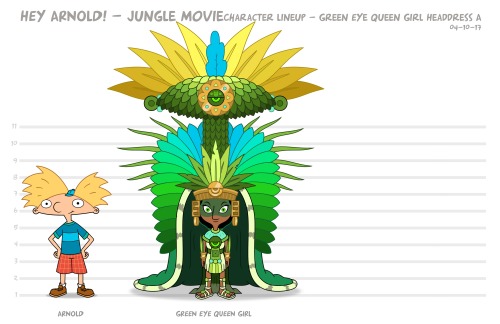 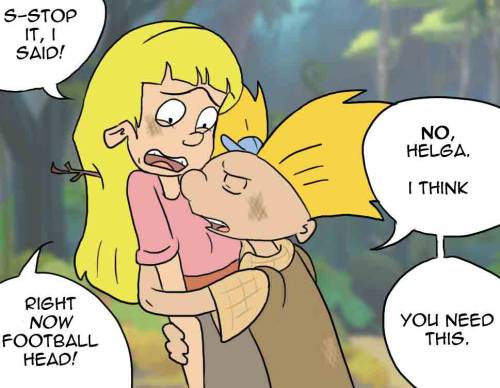 The Hey Arnold episode “The Journal” comes on TeenNick tonight at 10, followed by “The Jungle Movie” at 11.

It’s so good to see the flow of the two episodes air back-to-back FINALLY AFTER ALL THESE YEARS.

“Grandma! Grandpa! You have to see this! I found a map!”

Y'all ever think about Miles and Stella’s first impression of Helga? Pretty much everyone else knows her as an abrasive bully. But to them, she’s the girl who helped Arnold find them and save the Green Eyes. Her heart locket (literally her heart of gold and love for Arnold!!!!) saved an entire civilization! She loves Arnold and he loves her. She’s ballsy. At 11 years old, she attacked the infamous La Sombra with only a backpack and her unbridled fury. She beat La Sombra’s henchman with a stapler. She was ready to throw hands with Eduardo when claiming he could be another imposter. Oh but just wait until they hear the stories of Helga. Saving the neighborhood and ruining her dad’s business deal. The time she was the It Girl and had an entire city mimicking her. If she lets slip that time she reunited Mr Hyunh with his long lost daughter for Christmas but forgets no one except Mr. Bailey and Mai know it was her, Arnold’s brain would short circuit. I mean yes, she’s an acquired taste. She pulls away when Arnold holds her hand and doesn’t like showing affection in public. But I think Stella and Miles would forgive that for all that she’s done for them.

Also, Stella would destroy Big Bob at the next Parents Day competition.

Green eyed priestess for @lesserknownwaifus if I were ten years old.

#i would prefer to be a little bit more indian so i could have green eyes and not have to shave#hey arnold!#the jungle movie#helga's the shit#everyone in this show is nice
1 notes
afterthesemessagesberightback
Text

Another small thing I sort of like about these well-done modern reboots is that they symbolically let go of the thing tethering it to the past and yet it doesn’t seem forced or mean spirited in the slightest:

and the Orange VHS that Rocko watched The Fatheads on breaks.

I wonder what symbolic thing Jhonen’s going to do.