Been a while since I last drew Jervis 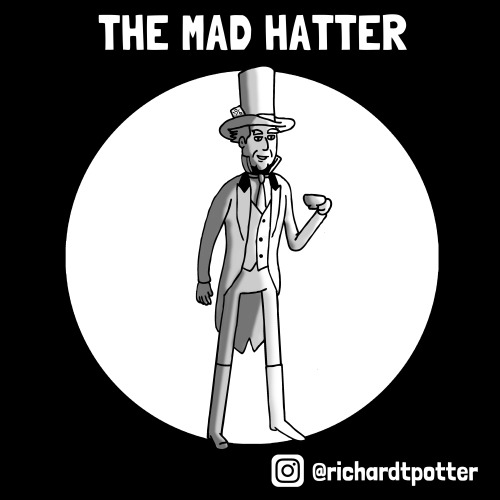 sebastian stan as the mad hatter/jefferson in once upon a time is amazing! i love him in that role!🥰

Jonathan Do you want to know how I actually hurt my wrist?

Jonathan: I was hula hooping. Jervis and I attend a class for fitness and for fun.

Jonathan: I’ve mastered all the moves. The pizza toss, the tornado, the scorpion, the oopsie-doodle.

Edward: Why are you telling me this?

Jonathan: Because no one will ever believe you.

Edward: You sick son of a bitch.

today. i offer you this doodle. tmrw? who knows.

ouat meme // [½] quotes
“you know what the issue is with this world? everyone wants a magical solution for their problems, but everyone refuses to believe in magic” 1.17

This is crazy, by the way.“ You mumbled to yourself.
"Are you sure you still want to do this?” Batman looked down at you and you nodded. “I’ve come this far.”
“Remember I won’t be far away and I won’t let you out of my sight.” Batman reminded you. “Yeah, got it. You nodded, run your hands through your new hair.

It was actually a wig, a blonde one that was styled like Alice from Alice in Wonderland. You wore a black skirt and white shirt with a black ribbon under the collar. After that was a red coat that you left unbuttoned and red lipstick to match. You memorised lines from the story but regardless, the blonde hair was important. It would be what fixates him. It was always the first thing that draws him in and then he can’t let go.

It was very cold in Gotham on this particular night and you weren’t sure if your trembling was in anticipation, fear or simply the cold. The plan was unconventional and utter madness, but so was Jervis Tetch. If you kept your distance from him, lured him away, then it would be fine The hostages would be safe.

Getting in was tricky, you had to be silent and create an exit for yourself. A quick and easy one. Luckily enough, the buildings entrance door had no door. Unfortunately, there were corridors upon corridors, like a maze.
It seemed almost fitting that he chose this place.
However your stomach dropped when you found he wasn’t alone.

Two-Face, Scarecrow and the Riddler were also present with Jervis.
You silently cursed to yourself.
These other criminals made it significantly more difficult, not to mention two of which being genius level in intelligence.
You were going to just leave, you turned, ducking behind a corner before Jervis’ voice rang out. "Alice?”

Maddie holds up a bag of frogs and they’re like you got all messy catching what three frogs? They glance at each other and nod

Well, vibe check yourselves and your pals.

When Alice fell down the rabbit hole, did it hurt? Because it sure hurt when you fell into some twisted world.

People who were creatures, some crazy Queen and animals who danced along like they were baked out of their minds.

After catching your breath, you started running once again. Behind you, screams and authoritative voices demanded you stop. You couldn’t stop because they didn’t have intentions on taking you prisoner.

As you continued jumping over fallen trees and running around stones, you stopped for a breath of air again.

All of a sudden a puff of smoke from your right caught your attention. Turning to see two men both staring at you with these big smirks on their face was enough to make a normal woman terrified.

“Uh hello?” You are beyond uncomfortable.

“Hello, dearie”. One smiled as the other with a top hat continued to stare.

The shouting became louder and you started looking around for a way next when the world started to disappear. Next thing you know, you’re in some small cottage, who on earth lived here?.

“So who do we have here?” A sultry tone asks

Turning around you see the man with a top hat, slowly backing up and tripping over a small level distance and falling on your ass.

“Well by all means, make yourself comfortable.” He laughs

“Who are you?” You were beyond frustrated and scared.

“Sorry! Where are my manners. My name is Jefferson, now what’s your name?”

“I’d say it’s a pleasure to meet you, but we all know I’d be lying.” He sneers

“Why are you even after me?” You huff

“You stole something from my friend and he wants it back.”

“I have no idea what you’re talking about.”

“Then why would you run?” He taunts lifting your chin up so you’d look at him.

“Because I was framed! I was being put to death for a crime I NEVER committed!” You snap

“Do you have any proof?”

“So you can’t just take someone’s world around here anymore?”

“Hate to say it, but someone’s word doesn’t mean shit around here.” He replied

Shoving him off of you, you get up and start to walk to the door.

“You walk out there, you will die.” He says picking up his hat before vanishing into thin air.

“Unbelievable!” You say sliding down the wall.

Taking about an hour to come up with a plan, you finally put it into motion and open the door timidly and then burst back off into the forest without any knowledge of where you were.

Running across a roadway, a woman who clearly had some importance in the narrative stopped you with her own form of magic.

“I guess the old saying is true after all. When you want something done, you might as well do it yourself.” She sneers

You stood still as her hands searched your pockets of your coat and jacket.

“What? I don’t understand, I was told you had it!” She yells

“Look, your majesty! I have no idea what this thing is that you’re looking for, I was framed and I was ordered to be executed, so I ran!” You are livid that no one wants to believe you.

“Someone ought to silence you, for lying to a Queen!”

“However! I can tell you she is in fact telling the truth.” The familiar sultry tone says from behind you.

And then the jackass that he is, struts into your view with a smirk.

“What!? You mean to tell me, she’s telling the truth?”

“Yes she is,dearie!” The other guy from earlier was now in your sight.

“Miss me?” He smirks

Even though you were innocent, you were still in a cell when you came to.

“What a way to die.” You mutter

“Oh come on now dearie, you don’t honestly think I’m going to let you die, do you?”

“I rather not talk to you, asshole!” You replied

“I can understand your frustrations, but I have the answers to all your questions!” He says as he waves a small vial in front of your face.

“A little bit of serum that will prove wether you’re guilty or innocent.” He says with a drop of sincerity.

“But I am innocent!”

“But are you really?” He says

You were brought to a weird room full of creatures and other people and the Queen herself sat watching as you began your trial.

“Do you swear to tell the truth and nothing but the truth?” A man asks

You nod and the trial begins.

Twenty minutes in and you can already tell that it’s not going your way. You don’t even get a lawyer, but the other side does. You begin to tell your story for the fifth time when the door opens. Jefferson walks in like he owns the place pulling a girl behind him.

“I found the thief!” He announces to the audience.

You sighed in relief as the real thief had been caught and now people would start to believe you.

The item in question was discovered and you were removed from the stand. As you left the courtroom, Jefferson opened the door and signaled you to follow him.

“I know you have no reason to trust me, but I was thinking of giving you a peace offering. Maybe you’d forgive me for how I acted.” He says timidly

“I don’t need anything from you!” You hiss

“Of course.” He says and then a portal opened.

“That’s the way back to your home, I’m sorry” he says

“I don’t care. The second I get away from you freaks, the better.” You snap

“If it’s not too much to ask. Can you give this to one of your students?” He says holding an envelope.

“It’s for my daughter…. well she doesn’t know she’s my daughter because of this curse, but I’m desperate to reach her. Please.” He smiled hopefully

You grabbed the envelope and headed through the portal and once again entered your own world full of normalcy and peace.

This song makes me think of Maddie and The Mad Hatter

I’ve been recently re-watching My Batman The Animated Series Complete Boxset, so fancied drawing the Mad Hatter. Which he is still one of my favourite Batman villains along with The Penguin, The Joker and The Riddler!

I wanted to draw him in my style, instead of the original BTAS art style.

More artwork is on it’s way. 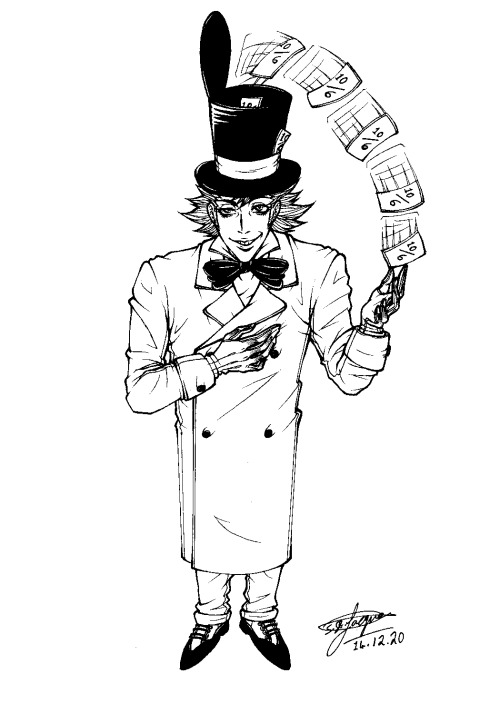 Jonathan: My favorite thing to do is tell my friends about the wild things Victor Hugo did and see the look of shock and horror on their faces because they only know him as the great author who wrote Les Mis and Hunchback and not as the man who gave his fianceé a live bat in an envelope.

Jervis: He what now-

They definitely would have still gotten married young. If they didn’t have to elope Cecilia would have proposed to Maximus on the White Castle grounds as is tradition for the next White Queen/King to do!

Maximus is ready to beat Pearl’s ass but no one let’s him.

His parents love Maddie so much, and they play a big part in raising her because Cecilia couldn’t be around (which no one blames her for). They adore Maddie so much and can’t wait to meet Sylvester too…jokes on them Sylvester sucks

They’re homelife was about the same however after Cecilia recovers from loosing Maddie she retakes her life and since she is technically now the White Queen she kicks her mother out and refuses to let her see Sylvester. Her mother dies shortly after the curse is put on Wonderland so its about the same as it was after Cecilia kicked Pearl out mostly because the curse happens like idk 14 years later cause Sylvester is only 2 when Cecilia is like bye mom gtfo out of my castle as he and Maddie are only a year apart

The Hatter’s adore Sylvester so much. The maids are very careful after Bonnibelle gets fired, they only sneak Sylvester and or Cecilia out every other fortnight or so when Pearl is away visiting the queen of hearts to discuss their agreements and what not.

Victoria is such a good name yes.