My girlfriend listened to @thepenumbrapodcast for the first time and I got to relive it vicariously through her :)))

Some thoughts from The Penumbra Podcast on regrets and asking for help too late.

#the penumbra podcast, #tpp, #my post, #juno steel, #tpp spoilers, #vespa ilkay, #the penumbra spoilers, #maybe this is nothing but sometimes you just gotta yearn
35 notes · See All
slushshieText

Juno Steel and the Man of the Future

#nothing writen down yet, #but lots of ideas, #junoverse, #tpp juno, #tpp, #the penumbra podcast, #the penumbra spoilers, #tpp peter, #tpp ben
20 notes · See All
junosteelwearskfccrocsText

why ‘call me maybe’ is a jupeter song: an essay (part 2) (sadder than the first one) (not clickbait) (but yes spoilers)

1. “You took your time with the call

I took no time with the fall”

the first part of this song was about murderous mask, but i believe these lines refer to juno calling peter at the end of midnight fox (which is the best juniverse episode yall). he really took his time, i mean really, six episodes without nureyev? why juno, w h y (and yes i know it’s technically three but they’re still separate episodes so…)

also, it really took nureyev no time to break into juno’s apartment just so he can say that it’s been a while. this man is extra.

also, this song doesn’t have anything specifically relevant to train from nowhere, so it’s miasma time :)))))))))

2. “I beg and borrow and steal

At first sight and it’s real”

juno sees peter’s memories (big oof time #1) and sees him learning to be a thief. he also sees peter killing mag (big oof time #2), but peter doesn’t know that, therefore only mentioning the borrowing and stealing in this song (and yes, i’m implying that peter nureyev wrote this song).

the thing that’s in peter’s way could either be the door to the Egg Room™ in final resting place (big oof time #3), or, if we’re still talking about teen peter, the memory of his past (which fits the beginning of the song, when peter talks about his wish to become nameless). either way it’s a sad time.

4. “Your stare was holding,

although it first seems like the stare is just juno staring at the love of his life, this line takes a darker turn - this time, the 'stare’ is juno reading peter’s mind. also, there probably wasn’t a washing machine in the martian tomb, so it makes sense that their clothes would be dirty and/or ripped.

Where you think you’re going baby?”

y'all know what this part is about :’)

i still stand by my explanation of these lines in the first part, but like the previous lines they change a bit with the context of the ending of final resting place. as @thejade7 said on discord, 'where you think you’re going baby?’ is peter waking up alone in the hotel room (or even worse, him being half asleep when juno leaves and thinking he just went to the bathroom or something. big oof time #4).

But here’s my number, so call me maybe”

i believe that this time, the chorus is not peter’s thoughts at the moment - it’s him not being able to move on from juno. he keeps thinking about the first time they met and how he felt when he saw juno crawling out that window, and wondering what could happen if juno hadn’t left.

“And all the other boys try to chase me”

this is peter trying to calm himself down, remind himself that he’s still the best at Be Gay Do Crimes and other people still exist. all the other boys are still chasing him, so he needs to move the frick on and disappear again. for a whole fricking season. w h y.

7. “Before you came into my life

I missed you so bad

And you should know that”

guess what? we just skipped to season 3!! this is jupeter finally talking about their feelings!! peter wrote this whole mcfreakin song for one of their poetry nights. i love one (1) poetry nerd. in fact, i am one myself. why did i write this thing? no one knows.

hope y'all enjoyed this, i’m gonna go do some homework now. or maybe write another song analysis. yeah, probably that.

why ‘call me maybe’ is a jupeter song: an essay by junosteelwearskfccrocs (part one: murderous mask) (but there’s also a spoiler for season 3 so..)

let’s analyze some lyrics, shall we?

this is clearly peter’s point of view. peter’s 'wish’ was to always move on and never connect to anyone. but of course, he cannot tell that to anyone, because then it literally wouldn’t be able to come true, because it would reveal who he really is - not just another character he plays.

“I looked at you as it fell

And now you’re in my way”

peter came to hyperion to do his job (and then move on and be whoever he decides to be today), but then he saw juno crawling out that window and (cecil palmer voice) fell in love instantly. he didn’t like that feeling, because it meant it would be harder to leave (= his wish “falling” and breaking apart). juno is standing in his way and now peter can’t run away from his problems. (it’s for the better tho. poor boi wears heels 24/7, his legs need some rest).

Pennies and dimes for a kiss”

this could be read two ways; the first is that peter left his old self behind to get his wish.

the second is why this is a separate point from the other things i said already - this is clearly foreshadowing peter’s debts in the third season (credit to peter transom on discord. you’re a genius and i probably wouldn’t write this if you hadn’t said that)

Where you think you’re going baby?”

as we all know from the educational space podcast known as the penumbra, there are a lot of sandstorms on mars. thus, wind was probably blowin’.

the 'where you think you’re going baby?’ is either referring to the end of murderous mask when nureyev wanted to spend the night with juno and juno arrested him after one (1) kiss, or (more probably) to juno being an idiot, and peter not knowing where tf juno is going, juno why are you putting cologne in the microwave juno nO-

But here’s my number, so call me maybe”

pretty self explanatory. also, it’s not his number, it’s his name. also, the next time they see each other, it’s because juno called him.

“And all the other boys try to chase me”

all the people peter had seduced while he was stealing literally everything they own and then left them try to chase after him, but they can’t. he’s just too damn good at Be Gay Do Crimes.

#this is the end of part 1 y'all, #part 2 will probably be more dramatic, #jupeter are idiots and so am i, #carly rae jepsen: a penumbra icon, #a penumbricon???, #jupeter, #juno steel, #the penumbra podcast, #the penumbra spoilers, #peter nureyev
25 notes · See All
mothmanismyuncleText

Juno Steel is a slut and a twink. An absolute disaster.

PETER BUT FOR REAL THIS TIMEGSHDHDHFBF

my head is SPINNING

Highlights from The Thief of Hearts playthrough Part 1

Lesbian in the chat: IM GAY BUT HE MAKES ME STRAIGHT

The whole Duke and Rose arc

“justin mcelroy is possessing noah simes” from the chat

The constant pet names from Peter

Them being crammed in a cannon.

Juno being distracted by how soft Duke’s hair is and petting it when he got high off of some gas.

I love the Penumbra Podcast fandom but also why is no one talking about Juno Steel and The Shadows On The Ship Part 2.

#THEY LITERALLY CRASHED, #PETER AND BUDDY ARE SOMEWHERE????, #PETER HAS A BROKEN LEG BTW, #ALSO WHO THE FUCK KNOWS WHERE JUNO IS, #NEXT CHAPTER IS PROBABLY GONNA BE IN BUDDY'S POV, #VESPA WAS THE LAST LEFT STANDING HELLO????, #IS ANYONE ELSE GOING TO FREAK OUT OVER THIS?, #juno steel and the shadows on the ship, #the penumbra spoilers, #the penumbra podcast
35 notes · See All
steelliliesText

[ID: 3 drawings, each of a specific color palette. the first is of virgil sanders sides in a purple and blue palette. he is a pale man with hair in an uppercut style, with the bangs covering his face emo-style. he wears a jacket with patches and looks incredibly angry.

the second drawing is aziraphale in a pink/purple palette. he is a fat man with short fluffy hair. he wears a button up, bow tie, vest, and trench coat. one of his hands is on his stomach while the other is slightly away from him, as if accepting the hand of another. he is smiling.

the last drawing is of juno steel in an orange/brown color palette. he is a dark person with short curly hair and an eye patch. he wears a turtleneck and a trench coat. he is looking away and down at the ground. end ID] 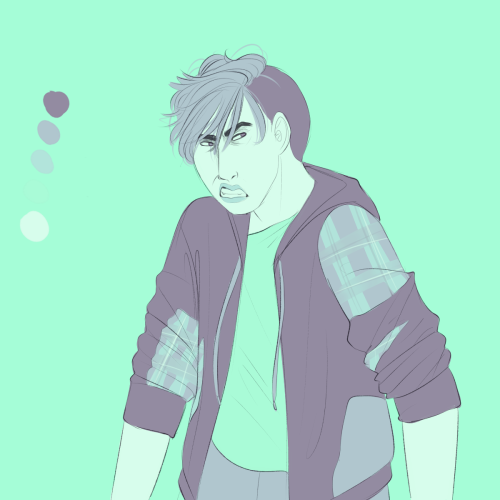 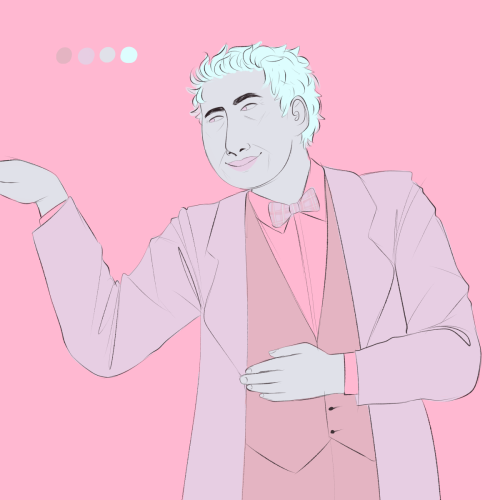 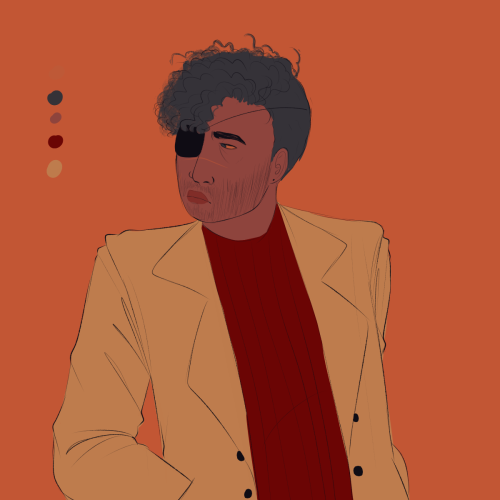