In no particular order here are my favorite Jonathan Crane romance fics. Feel free to add the one’s I missed.

1. The Bride of the Scarecrow by Christine M. Greenleaf

This story is seriously the cutest. Jonathan gets a girlfriend and it’s an overall feels fest.

This story is basically BATAS and Arkham games Crane merged. Way less of a feel good fic but definitely has one of the most in character Dr. Crane’s in a romance story. He’s creepy and it’s the one I always come back to for a Re-read.

3. A Misled Lamb by Thumderscourge

I never thought that Dr. Crane and Dr.Young could work as a pairing until I read this. Very long read and something perfect for being trapped at home.

Not complete but is such a good Nolan-Verse retell of Crane’s origin story.

This one is sooooo good but it also is criminally incomplete. It’s a real-world OC meets the video game verse but is so well written.

Jonathan: HOW DARE YOU!

Jervis: Look! We have the exact same ring! Twinning!

Bruce: I’m gonna need you three to treat each other with respect and common courtesy.

Jonathan Crane holds grudges. Especially against the people who bullied him.

And Bo Griggs–who first appeared in Batman Annual #19–is no exception. In the original story, Bo Griggs taunted and bulled Jonathan, that is, until Jonathan schemed and scared him during a date with Sherry Squires. Their car went off the road and they crashed, Sherry died while Bo survived as a paraplegic.

Of course that wasn’t enough for Jonathan. His bully deserved to suffer. That’s why he appears later in this comic, and its been twenty year s since that faithful day. Jonathan disguises himself as a devilry and a gives Griggs a mechanical crow. The moment he took ahold of that crow, he was doomed. 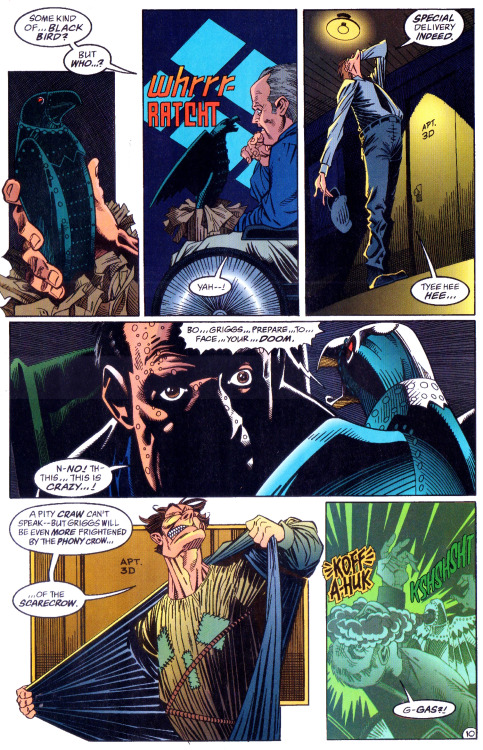 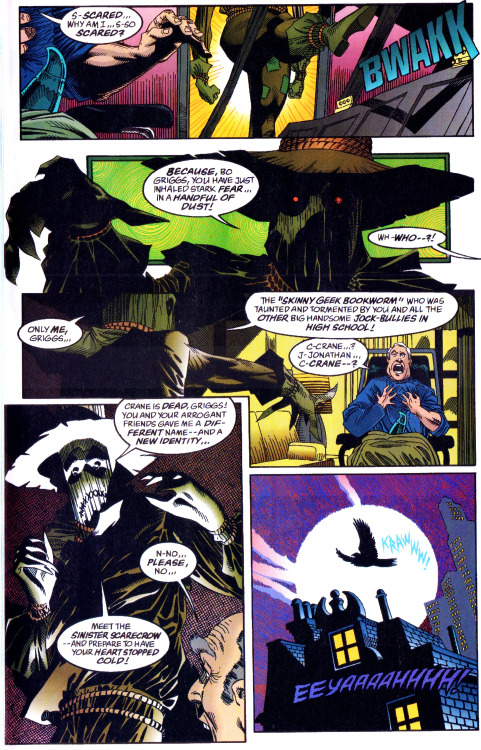 Jonathan: Do people under 175cm even exist?

Jervis: Listen up you giant…

Did you like Scarecrow better in Arkham Asylum or Arkham Knight? and why did you prefer the one over the other?

A re-draw of one of the first ever Jonathans I drew that I never actually posted. This has his current look that I draw him with. My friend helped me figure out his scars, the one on his face is from Croc clawing it, and the scar on his neck is from Croc biting it in what the two now find to be a rather comedic event.

Master of Fear || The Scarecrow 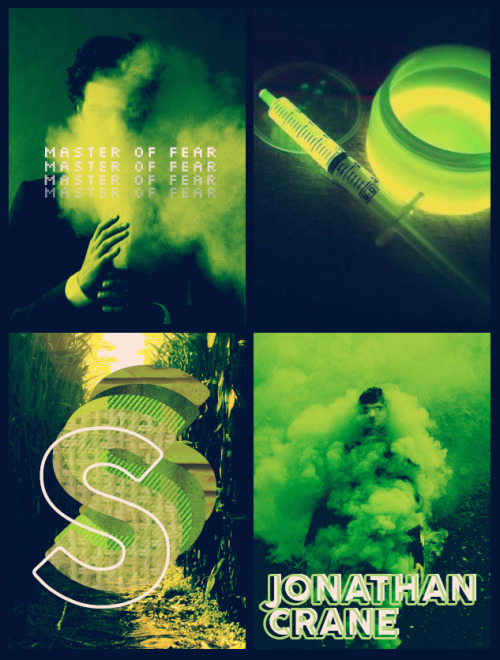 #Jonathan Crane, #Scarecrow, #The Scarecrow, #DC COmics, #Batman, #ScarecrowEdit, #Fear Toxin, #Fear Gas, #My Aesthetics, #Master of Fear
47 notes · See All
jonathan-cranes-mistress-of-fearChat
Harley Quinn: What’s it like being tall? Is it nice? Can you reach comfortably for the cupboards?
Jonathan Crane: We live in constant fear of the short ones who, in my experience, will climb four chairs, two boxes, a small coffee table, and six oddly placed stools to get what they want.
#Jonathan Crane, #Scarecrow, #The Scarecrow, #Harley Quinn, #Harleen Quinzel, #DC Comics, #Batman, #Quotes, #Unsure of the source
131 notes · See All
jonathan-cranes-mistress-of-fearPhoto

This is it…this is their friendship 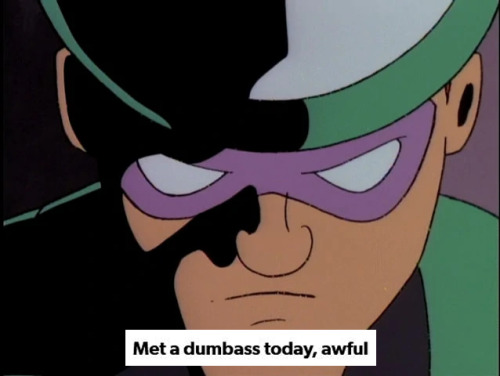 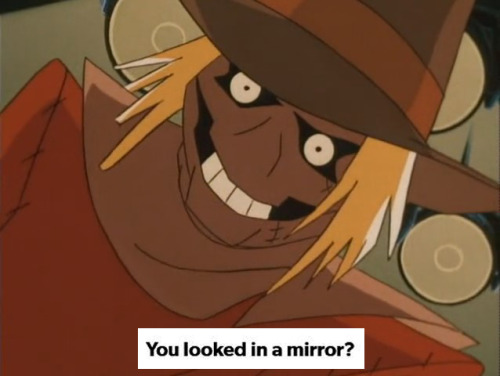 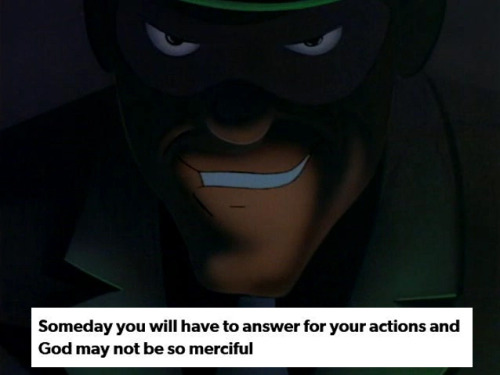 This is one of my favorite Scarecrow scenes. You can just hear his sinister voice coming off the pages. The fact that he coerced (i.e forced) Gordon out on the hands of the gigantic clock says a lot about how terrifying he truly is.

You can just imagine his irritation when Batman swoops in and saves Gordon! 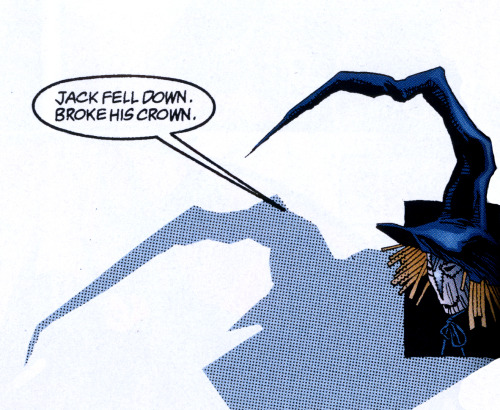 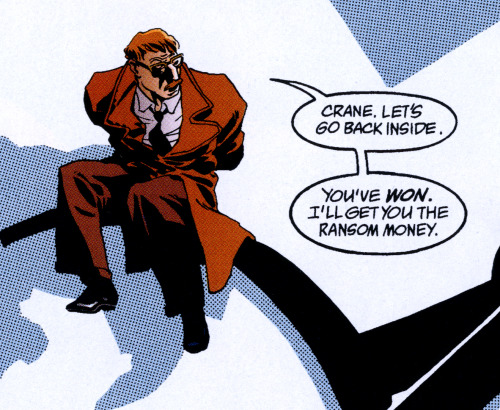 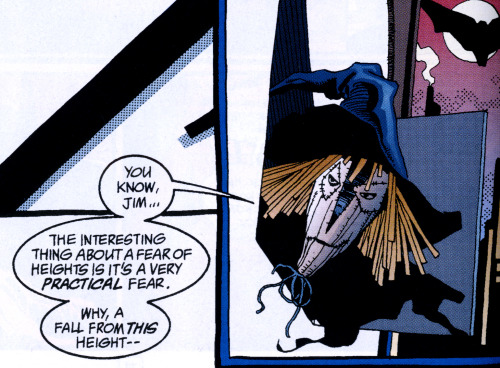 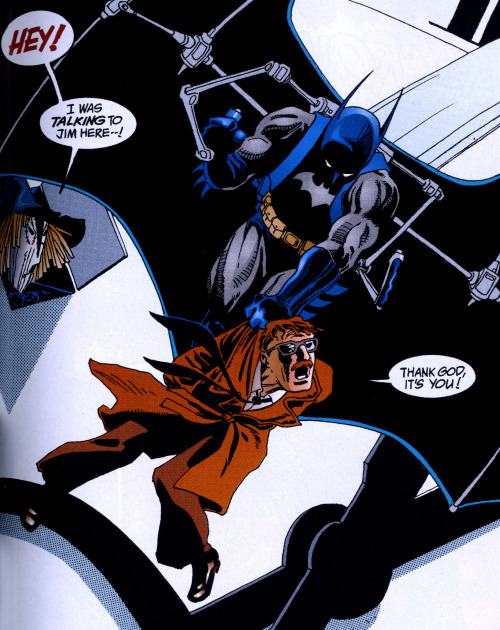 Think about it for a second, no other rogue knows more about Bruce than Scarecrow. In multiple comics and canons, Scarecrow as been able to deduce Bruce’s problems and trauma through the use of fear gas and simple deduction.

Most times after being dosed with toxin, Bruce sees his parents murder flash before his eyes and usually says something specific in the mist of fear, hinting to that trauma, and it’s happened enough times in the comics alone for Scarecrow to be able to gleam into his past.

Jonathan Crane knows about his childhood trauma, and he’s learning more and more each and every encounter. He’s even unmasked him twice, once in Arkham Knight and again in the recent Harley Quinn cartoon.

Those two are similar in a lot of ways too, they both went through a particularly painful childhood and they each donned a mask in order to cope. Who else better to understand Bruce Wayne then a masked weirdo like Scarecrow?

He could actually help him…if only Bruce would listen. 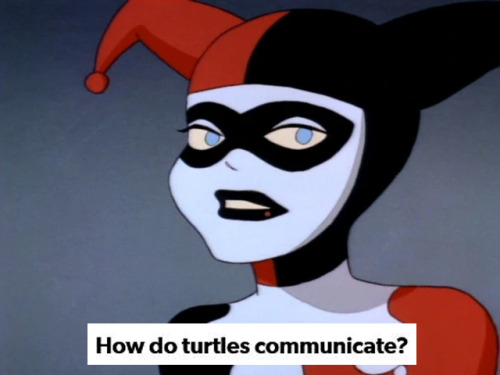 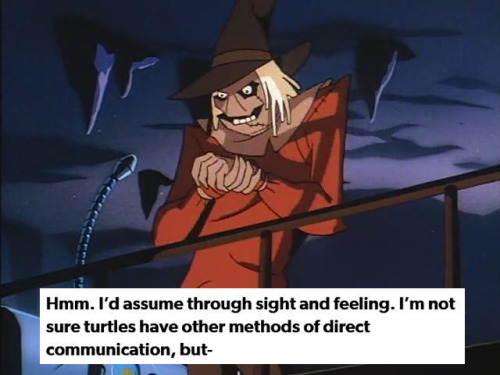 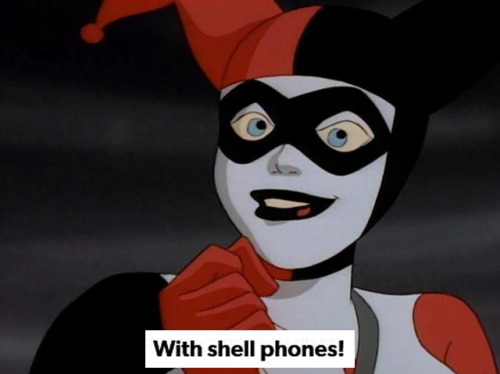 BTAS Scarecrow by @rafagrasseti on IG

No, I do not. I believe in facts and figures and what I can see and hear. I do believe that things that do not yet exist can be created or improved upon, but I do not believe in magic.

#inquiries, #the scarecrow, #jonathan crane
1 notes · See All
milkdrauwAnswer
I feel acutal scarecrow Scarecrow would be a reverse boogeyman for children. I.E, he comes across a young child, gives them a little straw doll "to scare away the monsters". Gotham forbid he hears thru the grapevine about a mob boss targeting a family with children (fear gas up the whazoo, no escape). Playground stories about him watching out for lost children. (I really love this scarecrow au, it's a wonderful take on the character. Also I'm a huge sucker for "monster who protects kids" tales.)

I love this a lot!! I think he’d enjoy the gifts given to him, collecting them and later giving them away to children who need a reminder that he’s there watching over them. He’ll protect those who cannot protect themselves.

Scarecrow slowly becomes ingrained in the Gotham mythos. If Batman remains a more cryptid figure that is. Either way works. He learns more about the city and how it works, using that information to strike those who need fear ingrained them the most.

The Adventures of Batman || The Great Scarecrow Scare