The fandom do be getting wild tho. 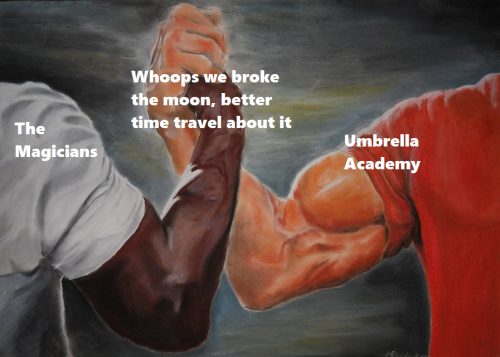 ben knows how to take selfies (from years of watching klaus), he just doesn’t want to

I think the article that came out needs to be taken with a grain of salt.

Netflix has been so cryptic lately it’s weird for a article to come out and talk about things that directly happen in season 2.

Also remember in journalism they have freedom of speech to say whatever they want to get their article more popular.

everyone: freaking the fuck out about cult leader klaus after that nerdist article

#i’m so tired, #i just want my favorite character to suffer, #the umbrella academy, #number five, #vanya hargreeves, #klaus hargreeves, #also i have a theory on klaus’ story for s2
11 notes · See All
i-seeaspaceshipinthe-skyText

#tua, #tuaedit, #the umbrella academy, #luther hargreeves, #diego hargreeves, #allison hargreeves, #ben hargreeves, #livtongifs, #misc, #its v neat to see how allison edits her stories for claire, #thank you for the request‚ i hope you like the result! :)
27 notes · See All
whenevilreignsText

My brain at 3am: hey do you think Hargreeves put Luther on the moon knowing it would blow up???

Me, sobbing: BRUH WHY WOULD YOU- 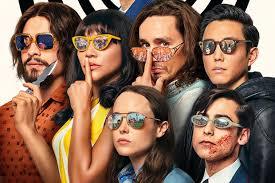 #he is so dying in s3, #HE PROLLY SHOWED HIS SHIT TO GERARD MF WAY, #I feel so much second hand embarrasment mans ruined his career, #tub, #the umbrella academy, #Zoe.txt
3 notes · See All
repeatinglitaniesText

If people are squicked out by fictional adopted siblings having a romantic relationship, would the reaction be the same now that we know sissy will be employing vanya as a live-in nanny?

A boss and employee in a romantic relationship. 🤔

Because there’s a sort of power imbalance there. What’s more vanya will be dependent on sissy like a new born baby duckling. With vanya having no memories and depending on sissy for a job, food and board.

while not strictly taboo, it’s not usually a good look to be dating a current employer/employee in real life. Mostly because the capacity for abuse of power can be seen as more likely to happen

Not that I have anything against it. Just wondering about it

When you go back in time and end up trapped alone in the 60s thinking your whole family might be dead:

#nsfwitchytalks, #tua, #the umbrella academy, #klaus hargreeves, #t/u/a, #this is the funniest fucking thing I love it so much, #I for one accept Klaus as our lord and savior, #and support him in his endeavors, #’I said ‘that’s my baby and I’m proud’ ‘
24 notes · See All
dogbearinggiftsText

So, not knowing all the details on this cult in S2 (I’ve kind of intentionally disconnected from a lot of social media and/or haven’t kept up with notifications):

Honestly, I’m less worried about it being portrayed as “good” than I am about it being a one-note stereotype. I’ve done a lot of amateur research into cults, and I’ve found two recurring themes:

1. Cults don’t recruit the evil or the naive with messages of self-destruction and the end times; more often than not, they recruit smart, idealistic people with promises of improving the world, themselves, or both.

2. Every cult is different.

I could go on about this and what I’ve learned, but it’s pretty dark stuff and I don’t want to go into it unless people want to hear it. But I will say that the cults I see portrayed in fiction usually bear little resemblance to the real-life cults they’re supposedly based on. Fictional cults are groups no one in their right mind would join. Real cults are groups that anyone, given the right hook and a little cajoling, could be led to join. They present ideas that sound good in a way that makes you think they can only be found within the group, and by the time you see the darkness beneath, it’s too late to leave—assuming you see the darkness at all, because you might have been taught to just focus on the positivity that first led you to leave your old life behind.