So this Sunday I got sucked into this play reading thing last minute. Basically the repertory company I’m in does these events where anyone who’s interested can join a zoom where a cast cold reads all these different plays. Like 30 minutes before one of these on Sunday, my director texted me and asked me if I could read for the character of Cassidy in the play, Appropriate. (I’m thinking someone else dropped out or something?) So I did, and it was a good experience. Script reading is fun :) So we had discussions before and after the reading. We read up to about halfway, and the second half of the play reading is going to be this coming Sunday. I’ll share more about the contents of the play after we finish reading it!

Blindness, incompletion, and wisdom at the Opera: Tchaikovsky’s Iolanta

Blindness, incompletion, and wisdom at the Opera: Tchaikovsky’s Iolanta

The musical counterparts of Alexander Hamilton (Hamilton) and John Adams (1776) would either be amazing friends or mortal enemies. No in between.

Random musical crap I found in my camera roll

Oh my gosh— that is such a compliment to me you have no idea! Thank you. It’s strange— I’m pretty insecure still and introverted (not what you would think for a theatre kid), but I get this a lot.

I love theatre and did it all throughout middle and high school. I even went to a performing arts charter school for awhile before moving states!I’m currently transferring colleges and hope my new one has a better theatre program because I miss it dearly.

Here’s fetus Ryn in her first role— a dwarf in Snow White. The character was supposed to wear a bald cap but we soon realized there was no getting my head of hair under one.

Is it better to have your callback audition earlier or later than most people?

A report today in the West Australian by Kim McDonald today that the Fremantle Spare Parts Puppet Theatre will be renovated and will get a larger audience capacity is very exciting, but when I bumped into the Member for Fremantle Minister Simone McGurk at the train station this morning she told me no funding had been allocated yet to the $ 9.5 million project.

According to the West Freo based…

Omg surprisingly no one has actually asked me this! I can only go off the information that we do have on the newsies, so I can probably only type Jack, Davey, Katherine, Les, Pulitzer canon. The rest would have to be off headcanons :)

Jack: ENFJ. He’s an extrovert, intuitive, a feeler and a judger. This means that he can have his mind set on one thing and just got with that. When he thinks he’s right… he’s right. It takes a lot of convincing to tell him otherwise. He’s pretty spontaneous. (I mean he was ready to just… go to Santa Fe and give up on the strike, what other evidence do you need? Not only that but he’s charismatic, charming, a ldeder but his sense of self worth keeps switching left right and centre.)

Katherine: INFJ. Introverted, intuitive, feeler, judger. She’s creative. She’s thinking a lot. She’s still got them feelings though, they guide her on her decisions. (The strike, helping the newsies when they’re in need, creative writing, pressure. I know a lot of people see her as an extrovert but hear me out; she sat out of KONY, got nervous infront of them, is quick witted to try and shut people down, and of corse “I am not in the habit of talking to strangers”)

Crutchie: ISFJ. Introverted, observant, feeling and judging. He’s a nurturer and caring, yet he knows what’s best. He’s enthusiastic, loyal, respectful and has good practical skills. However he can be reluctant to change and takes things too personally. (He was always with Jack, kind, caring, trying to comfort Jack even when he’s being held prisoner… I don’t need to elaborate further.)

Les: ESFP. Extrovert, observant, feeler, prospecting. He’s bold. He’s entertaining. He goes with it. He’s easily bored. He creates hype and knows what’s up. Good kid. 10/10. (The kid walked up to a bunch of boys twice his age and just- joined them… and then Sally… and the boy pointing out the obvious to make jokes… he’s a vibe)

Race: ENTP. Extrovert, intuitive, thinker, prospecting. Hes characmatic, charming, great at debating, quick witted, and persistent. However he finds it hard to focus, can be argumentative and insensitive. We still love him though. (Just- everything he does)

If you have more you want me to try and do let me know :) I’m obviously not like- a professional but this is just what I assume.

“AND STOP STARING AT ME WITH THEM BIG OL EYES”

Gretchen: Who are you?

Heather Duke: I’m you, but be-

Heather Chandler, from a distance: SHUT UP HEATHER

Gretchen: Got it, say no more.

Text ID: O light! Yes I call on you— / you still belong to me 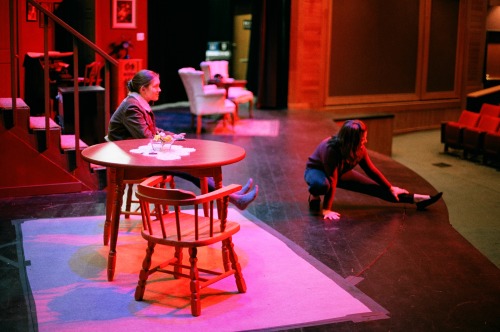 The concept is fairly simple: The participants either individually or as a team play the role of an independent theater maker who’s decided to stage a Shakespeare play. While it envisions each player as an artist, really, the game is limited to the vicissitudes of self-producing the show: Can you fund what you choose to do, and, in the end, do you come out in the black or in the red?

Each player comes up with a company name and mission statement, and then, using the simple PDF guide, decides on which play to perform in order to encounter their first real challenges.

“It’s a short-hand,” Einhorn explained of the choice to base the game around Shakespeare. Strictly speaking, you don’t really have to know anything about the play you choose to produce (we went for Titus Andronicus, the plot of which I barely recall except for the writing-in-blood and, I think, eating children?). But as a baseline, it works well for gameplay: The plays are relatively well-known, and therefore it’s somewhat obvious how the numeric values attached to each of them are developed…

Whichever play you choose establishes the variables the rest of the gameplay depends on. The relative reputation of the play (e.g., Hamlet receives a different ranking from Timon of Athens) becomes a variable in how likely audiences are to see it; a conservative choice of a well-known and liked play may make it easier to get people in, but the rewards are lower, whereas a riskier choice of a less well-known play (there’s even the option of staging a “lost” Shakespeare play) will be harder to pull-off, but offers potentially higher rewards.

experimenting with different lamps and colours in class today

so i got bored in school today and wanted to watch a spring awakening bootleg and ended up finding a french one, it was just like a read threw so my expectations weren’t to high, but OH BOY let me tell you about this

they completely cut out from and then there were no til the guilty one, meaning it went straight from when moritz’s dad is yelling at him to don’t do sadness/blue wind

they cut touch me but keep the dialog from it

lastly instead of like a fake gun or whatever, they just had moritz make a finger gun and use that

Heyyy here’s an edit I made of Anna Francolini’s exceptionally hot and badass Captain Hook in National Theatre’s production of Peter Pan! THIS WOMAN IS A QUEEN OHHHH MY

once i figure out why seventeen and its reprise hit me so hard, psychologically speaking, i will be able to fix my mental health <3

I’m listening to the authentic german Rebecca for the first time and omg its so good and emotional and well-staged and acted ;_; !!!