Just a quick reminder that Odin never says Frigga begged for Loki’s life. That is simply how the fandom has chosen to interpret his words. What he said is:

“Frigga is the only reason you are still alive.”

That she advocated for him not to be executed is one possible interpretation of that statement. I’m not saying she didn’t do so. I’m just saying that’s not what he said and I wish people would quit claiming otherwise. Another, equally logical interpretation of his phrasing is, “I know that Frigga is your weakness and that being forced to go on living without her will hurt you more than execution would.”

Alternatively, both could be true. Frigga could have asked for Loki’s life to be spared, and Odin could have acquiesced not out of any loyalty to her but because he realised it would be even more cruel than simply killing Loki.

Any of the above interpretations are valid. I just tire of seeing people reference her advocating for Loki as proof positive of her love for him when we don’t even know that she ever did so. Especially when it is so often used to brush aside or minimize all the ways in which she gaslit and emotionally manipulated him. Even if she had begged for his life, that doesn’t nullify the harm she did to him otherwise by her actions both in his cell in TDW and at Odin’s bedside in Thor (2011).

#do i think frigga loved loki?, #that depends on what you mean by love, #do i believe she had positive feelings towards him? yes, #do i believe she spent time with him and provided him with some limited degree of feeling seen or accepted? yes, #do i believe she ever put him first? that when push came to shove she ever took his side over odin's or thor's? no, #her role in this family has always been to pull loki back into the toxic fold when he threatens to break away, #as evidenced by her treatment of him in tdw, #(and to a subtler degree the aftermath of learning about his heritage in thor 1), #no one was ever truly on loki's side, #not in any way that really mattered, #not in any way that might have saved him, #loki meta, #loki, #odin's a+ parenting, #frigga's b+ parenting, #thor the dark world, #mcu, #topic: odin's family dynamic
42 notes · See All
lovermrjokerrText

When Odin learns that “the mortal has escaped” aka that Thor broke Jane out of the palace, Odin says this

“Stop Thor, by any means necessary.”

Which sounds like to me that he’s so certain that their plan is wrong, that he is ready to have his guards kill Thor. His own son. Keep in mind that Odin said this only days after losing Frigga and imprisoning Loki.

Later on in the movie, when an Einherjar/guard (who is actually Loki, unbeknownst to Odin) comes to Odin

“Forgive my, my liege. I’ve returned from the dark world with news.”

And Odin, who was standing there, staring at the broken throne as a broken man, asks “Thor?”

To me that sounded like Odin expected to hear that Thor had been stopped – killed.

Also everything about him just standing around there, looking like a sad and grumpy old man feels wrong. It looks like Odin is defeated. Something about an old king looking at the broken throne feels symbolic, he’s looking at what was supposed to be Thor’s throne, now broken and empty. It’s like he was thinking about how his son would never be kind. His legacy was shattered. Overall he just looked miserable.

Bonus, you gotta give some props for Loki for not telling Odin where Thor was or what his plan was.

I also think that Loki had an entirely different plan than we’re made to believe.

In the ending of Thor: the dark world, Loki/Odin is on the throne talking to Thor. What surprised me was that he asked “What can Asgard offer its new king in return?”

Lodi!Odin was going to make Thor king, but it didn’t really go as planned because Thor thanked no to the throne.

I simply wonder, did Loki know Thor was going to say that? Or did Loki have a plan? I really wish I knew.

Anyway my point is that Odin sucks ass and nearing his end he was just a bitter old fool :)

“The revelation of Loki’s lineage that he was adopted… you see this extraordinary vulnerability in him, which gives way to anger, and rage, and self-disgust, and confusion. And then all of those things harden to what becomes his malevolence.”
— Tom Hiddleston

#tom hiddleston, #loki, #loki laufeyson, #lokiedit, #marvel, #dailymarvel, #mcu, #theavengers, #hiddlesedit, #dailymarvelheroes, #mygif, #ta, #tr2, #tr, #motionpicturesource, #marveledit, #mcudaily, #the avengers, #thor, #thor the dark world, #frigga, #*, #i take this moment to feel better to create this, #because it was in my mind since during my flu
1K notes · See All
brilliantminds19Text

Just thought of putting a random title in the image, no real connection whatsoever 😶

Holy shit, I forgot chris o'dowd was in thor the dark world

Thor:- loki, how scared are you?

Hela:- this is why I want to kill you. 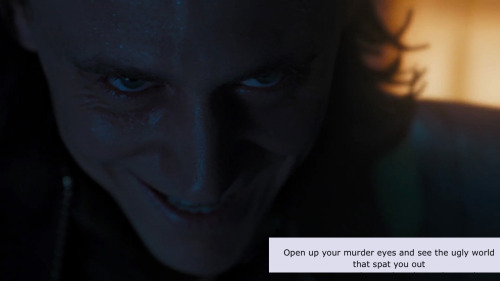 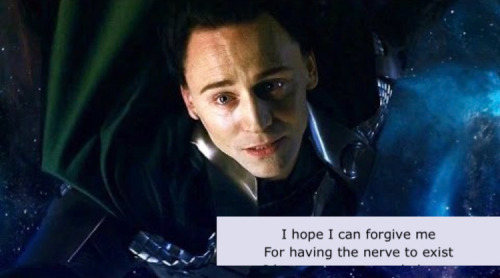 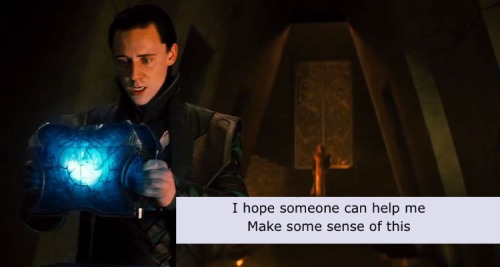 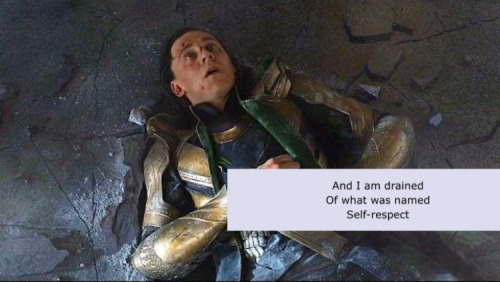 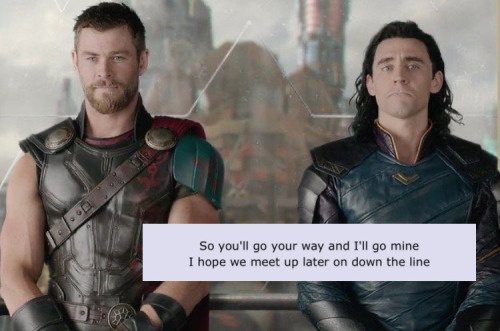 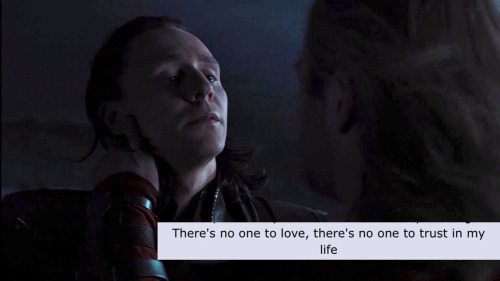 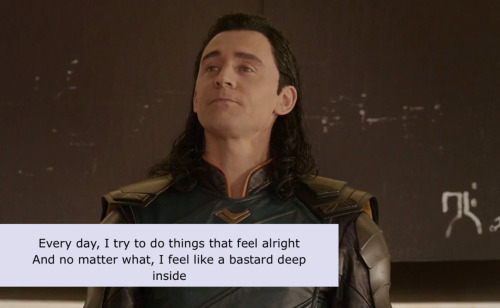 Summary: When Loki died on Svartalfheim, the reader, a practising sorcerer on Midgard, accidentally pulls his spirit across the realms and traps him there in the apartment. As the years go by, a special relationship develops between them. Today, on the anniversary of his death, everything is about to change for them again. Warnings: character death, ghosts, hearing voices, suggestive themes, angst, sadness, goodbyes

Notes: Written with Halloween on the brain, ghosts and magic and all, but its really just kinda sad. Soft but sad. Find a tissue.

He was there again. Watching you from the shadows, lurking on the edges of you room as you slept. His presence was sharp as a knife, the dangerous edge dancing across your bare skin with every step he took towards you. You could hardly recall a night when he hadn’t hovered in the darkness, when your sleep had been your own and you had been free to lose yourself to slumber without him around.

Trapped in a bubble from the outside world, the noise and clamour of a bustling city drifted to nothingness as he strode towards your bed, the clanging of his heavy boots silenced by the same magic that separated you from the rest. Drowsy, you turned your head towards him, the only response he would accept even by a mind muddled with exhaustion.

Frozen fingers traced the lines of your face, mapped every imperfection and blemish. The trail dipped lower, his icy touch following your jaw, slowly – so slowly – as if he was savouring you like a stolen piece of artwork, breaking every law for a single moment of forbidden contact. You knew he thrived on that; rules were meant to be ignored and nothing would stop him from taking what he wanted.

It drove him to be more brash, to splay his hand across your chest, holding you down against the mattress. His thumb caressed your collarbone, drawing shaky breathes from your lips, your body reacting to the gentle swirling patterns against your will. Sleep and the bliss of unconsciousness slipped away as he cleared the fog from your thoughts, the magical touch igniting something in the depths of your mind.

Rolling over, your hand passed straight through his body as you waved him away. Stupid ghosts. Face buried in a pillow, you groaned, “It’s two in the morning, Loki. Go to sleep.”

So I was just thinking abt the Loki series, and how for him TDW and Ragnorak will not have happened. Y’all, he doesn’t know Frigga is dead. I- I just don’t know what to do! What is he going to do when he finds out? Oml he’s gonna be so sad-

Loki in his cell 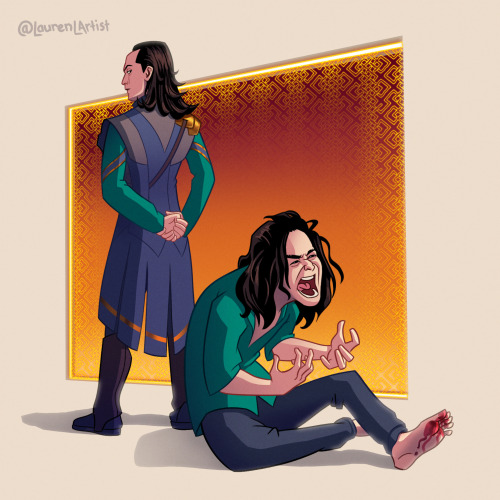 just watched thor: the dark world. what the FUCK was that piece of shit movie? the only good parts were the loki parts smh. first one was way better. 4.5/10

up next - captain america: the winter soldier which i KNOW will be very good.