i happen to love sam cortland…like, a lot, so, uh, dont read the prequel after the series because im already crying knowing what happens to him……

rip to my heart.

Hello, I’m Booboo the fool and I’m about to start the Throne of Glass series for the first time ever.

I really have absolutely no knowledge about this series and apparently when to read this prequel is HIGHLY debated. Some say after the second or third book, some say the beginning, and others have other opinions. I started from the beginning.

So far so good, this book really focuses on Celaena’s character and motivations and past, and I think other characters throughout the novellas will come into importance later in the series. It was pretty good all in all. I like that she’s spoiled and selfish and is AWARE. And that she reels back from it at times when she feels like she should.

Hopefully I can read all these books before I need to reread Stormlight Archive before November 🤣 but it depends if I want to read them all one after another, or read one and then a different book then back to the series. I will jump into Throne of Glass immediately right now since I have it.

Also hoping the writing quality doesn’t dip too much from the novella from the first book she ever wrote. We’ll see.

I just wanted to say something about one of the throne of glass novellas covers. On the cover of Queen of Shadows is supposedly alein in her assassins leather outfit and a red cloak but it occurred to me that it also looks very similar to how manon is described. She wears flying leathers and the red Crochan cloak. I just wanted to say that because I think it’s worth pointing out

“The firelight cast the
smooth, elegant panes of Sam’s face into
light and shadow—a face, she’d been
told, that could have earned him a
fortune if he’d followed in his mother ’s
footsteps. But Sam’s mother had opted
instead to leave him with assassins, not
courtesans, before she died.”

“His mother, sold at eight to a brothel,
had spent her too-short twenty-eight
years clawing her way up from an
orphan to one of the most successful
courtesans in Rifthold. She’d had Sam
only six years before she’d died—
murdered by a jealous client. And though
she’d amassed some money, it hadn’t
been enough to liberate her from her
brothel—or to provide for Sam. But
she’d been a favorite of Arobynn’s, and
when he’d learned that she wanted Sam
to be trained by him, he’d taken the boy
in.”

“His mother had been one of them, and
had asked Arobynn—a patron of hers—
to look after her son. Sam had only been
six when she was murdered by a jealous
client.”

The best kind of mail. 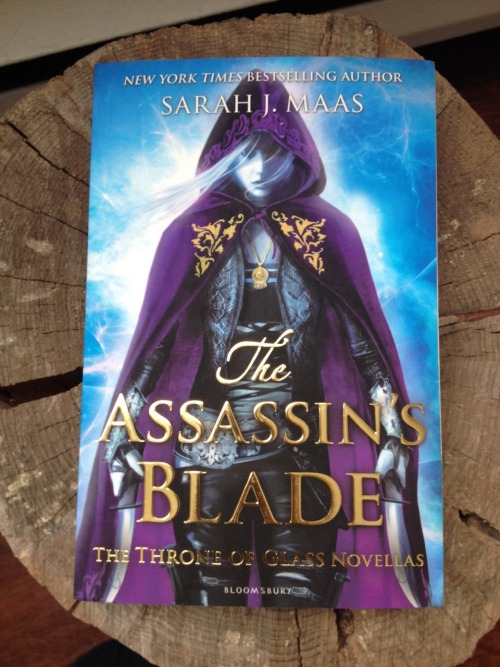 Reading The Assassin’s Blade has been a lot more emotionally traumatizing than I though.

Went to see my parents the other day and managed to snap a picture with our cat, Missy. Look at her being majestic. #the assassin's blade#throne of glass#sarah j maas#throne of glass novellas#kitty#cat#book photo#book photography#mine
87 notes
athosporthosaramis
Quote
<div> —  Sarah J. Maas, The assassin and the desert </div><span>As the memory of that day echoed through her, she remembered the words Sam kept screaming at Arobynn, as the King of the Assassins beat her, the words that she’d somehow forgotten in the fog of pain: I’ll kill you! Sam had said it like he meant it. He’d bellowed it, again and again and again…</span>
#celaena sardothien#sam cortland#the assassin and the desert#throne of glass novellas#throne of glass#sarah j. maas#turning point for me#lovely brave sam#samloena#tog#aelin ashryver galathynius#queen of shadows#I wanna see what will happen in the big meeting
159 notes
screwitanddoitanyway
Text

and then I remembered I hadnt read the novellas!

Do I have to read them before crown of midnight?

but I keep hearing about

the assassin and the captain

the assassin and the princess

are those real novellas?

does anyone know where  I can read all the novellas online for free??? please help

I saw on booktok that Sarah said she would write a Manorian novella. Now, CAB SOMEONE TELL ME IF IT’S TRUE???? I NEED ONE PLEASE SARAH MAKE ONE

My 2 A. M thoughts (basically me clowning)