Chrizzy is a random Gotham citizen I made up.

If you guys want your own account tho were you can flirt or talk to the batfamily members just tell me what you want your @ and username to be and give me a picture and I’ll make it happen!

#batman, #bruce wayne, #dont tell me it cant happen bc its hapened to me, #same goes for any bat, #batfam, #the dark knight, #damian wayne, #tim drake, #jason todd, #harper row, #duke thomas, #cassandra cain, #stephanie brown, #dick grayson, #terry mcginnis, #duke is the only one who sleeps i think, #that man has too many children, #wait, #barbara gordon, #kate kane, #and too many vigilantes, #i think thats all, #maybe?, #definitley tim tho
11 notes · See All
cynthiadoodlesText

☆ a/n: alright so i saw this fanart and it gave me this idea and stopped me from working on my series lmao. the next part of the series’ll come out soon hopefully! <3. either way, i’ll be releasing a couple of drabbles through the next few days.

When he desperately looks to them, pleading for any help to stop the onslaught, none of them can look. The sight is far from the worst any of them have seen. Still, Y/N hides Damian away in their cloak, and pulls Dick into a tight hug. Neither complains. They’re superheroes witnessing destruction unlike any other.

The eldest can’t bear to watch as Jason desperately fights a losing battle. From experience, they see that he isn’t holding back, even as tears fall from his eyes. Jason fights as best as he can, but he has not reached the point where he can defeat his master.

Not many could. Bruce Wayne is a different kind of powerful.

This whole situation was surprising. That was the only word to describe it. Despite the pain of watching their brother being beaten, they wouldn’t intervene. It’s the pain of the betrayal, of his death, that stops them.

The pain of knowing it had been deliberate.

Y/N Wayne watches as their father rips the red bat symbol from her brother’s chest. Jason clutches at the exposed skin, and they know he feels like his heart has been ripped out. There’s a part of his soul that’s filled with pride, knowing he carries the coveted Bat symbol.

The entire family loses parts of themselves that day. Y/N knows that Jason wishes Bruce would kill him. In some ways, the torture of living is worse than the sweet release of death. Even through the sadness and anger, though, Jason is still Bruce’s baby bird and even after what he’s done, Bruce couldn’t bring himself to kill him.

None of them could.

They watch as their father cries. They feel tears soak through their suit, and they know their brothers are crying.

The entirety of Gotham mourns the death of Red Robin.

The entirety of Gotham mourns the death of Red Robin at the hands of the Red Hood.

Impulse getting whammied and thinking he’s Batman, and Tim just being done will always be one of my top 5 Young Justice moments.

Jason: You seem a tad wound up, buddy. And your face is greasy. Real greasy. You been up all night?

Tim: Of course I’ve been up all night! Not because of caffeine, it was insomnia. I couldn’t stop thinking about coffee. I need a nap.

[Jason makes Tim a decaf mocha with melted melatonin chocolate mixed in, he watches Tim drink it and waits.]

So Tim is in a cult.

Also unwillingly —that part’s important, he’s pretty sure. He’s only here because of some deeply confusing events that he definitely did not instigate in any way, because listen, Tim is many things and will absolutely admit to his growing proclivity for Being In Cahoots. Hell, he’ll even admit to being currently allied with two separate sides of the most recent Justice League prank war. But he’s fairly sure he’d remember setting up his own disappearance. Especially if it involved being drugged with a tranquilizer gun, of all things, on the day before his history exam, during a very real surprise battle. Possibly involving ninjas? Tim’s memory is pretty hazy.

I feel like even though Damian is the baby of the family, Tim is everyone’s baby. Everyone is so protective of Tim. Not only is he small and adorable but he’s vulnerable to many things and that makes them more productive

i like how dc gives jason and dick pants as robin whenever there’s a flashback now instead of their fucking underpants,,,, face your past mistakes dc give them back the undies!!!! 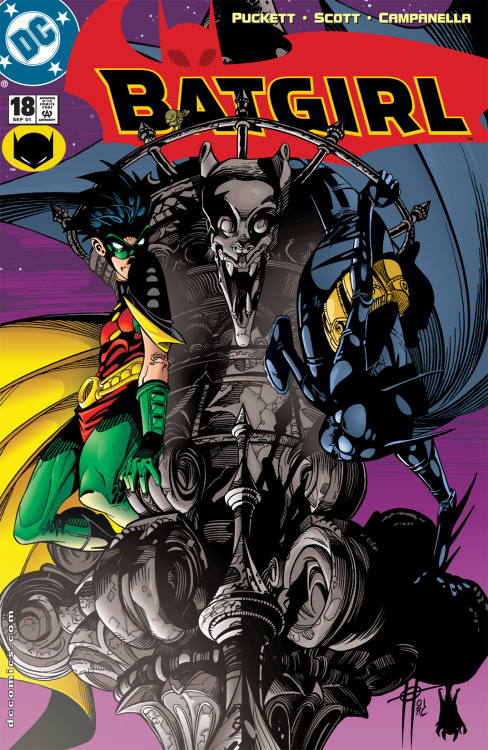 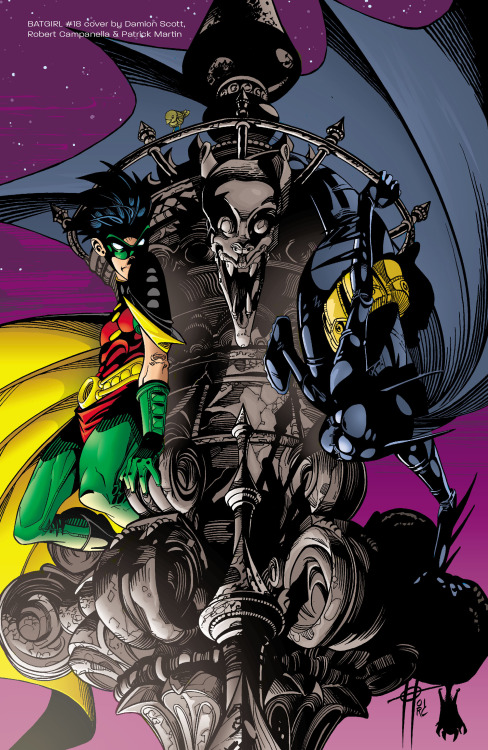 Bruce wasn’t going to deal with it.

He’d managed to push Selina’s… scolding, out of his mind after he’d gone home. Gone back to the cave and spent an hour trying to track down the little girl.

What was a child even doing with the League? More than anything, that was the question he wanted answered.

It was abuse. It was absolutely, 100%, abuse. To train a child up like that. Send her out on missions. Send her after Batman, of all people. Obviously, they probably knew Bruce wouldn’t hurt her, but it was still stupid. What if he’d hit her with his batarangs? What if he had hurt her, before he realized she was a little girl?

Would Damian had ended up like her, had he let Talia keep him? Had she never brought Damian to Gotham in the first place?

That thought alone sent Bruce on up into the house.

Damian was right where he belonged, of course. In bed, fast asleep where Bruce had tucked him in before patrol. Figaro was curled up at his side and Ace was over his legs. Ace actually lifted his head, when the door cracked open, but quickly dismissed Bruce’s presence and snugged back down. No one was getting into Damian’s room without Bruce knowing.

Out in the hall, the light from Jason’s room made Bruce pause.

He wasn’t going to deal with it.

Jason’t hadn’t even closed his door. Not fully. And the light on meant he was still up. Still up and probably reading. Jason never stayed up late to read. Not unless he was upset about something and trying to distract himself.

Bruce leaned forward, resting his head against the wall between Damian and Jason’s room. He had to deal with it, didn’t he?

Curse Selina. If they weren’t already broken up, he was going to break up with her over this.

“Jay,” he said, softly as he knocked at Jason’s cracked door. It creaked open further when he did, allowing Bruce to see Jason scowling down at his book, half way under the covers but still sitting up. “Are you still awake?”

“No,” Jason said, turning the page, not even looking up.

With a sigh, Bruce pushed the door fully open and walked in.

Scene: Steph and Jason, hanging ten feet above the floor in a net, having walked right into it because they were so focused on ragging on Tim’s new codename.

Steph: 🎶Is this the Bat-life?

Jason: Or is this just fantasy? 🎶

Steph and Jason: 🎶 Caught in a net trap!

Riddler, joining in and making his voice go deep: 🎶No escape from the enemy!

Tim, standing in the doorway: ….

Tim: You know what? You can have them! *walks away* 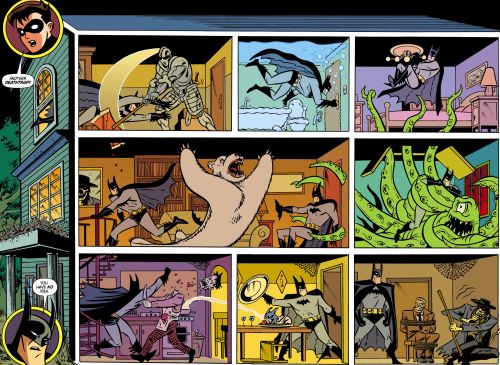 Tim picked it for me.

#I LOVE THE WAY THIS ARTIST DRAWS TIMMY... HE ACTUALLY LOOKS LIKE A CHILD, #TIM MAY LOOK LIKE A CHILD BUT HE HAS THE SASS OF AN ELDERLY BRITISH BUTLER, #DONT GIVE THEM TOO MUCH CREDIT TIM THATS A SHORT NOTE, #ACE WOULD NOT BE HAPPY IF TIM ATTACKED THIS DOG WITHOUT READING THE NOTE FIRST, #dc comics, #batfam, #batfamily, #out of context, #robin, #tim drake, #boy detective wonder, #funny, #dammit tim, #baby tim, #dog lover, #notes, #sassy tim, #alfred taught him well
115 notes · See All
lurkinglurkerwholurksAnswer

As a reward for your diligence in your schoolwork, I will answer this. (Good job! Do me proud!)

The That Scene for The Return was partially the first chapter. I’d talked at length with @audreycritter about how canon didn’t have the catharsis of seeing how Tim reacted to Bruce being ALIVE. After all he went through, the boy deserved hugs, dagnabit. But it was also, partially, the third chapter, because we also discussed The After and how much Tim still had to work through.

Other things I write:

chapter 4: grab me by my ankles, i’ve been flying for too long

Dick and Jason quickly incorporate Tim into their antics. Unfortunately for Tim, trouble is afoot.

Never let it be said that Tim Drake has a normal sense of fear.