Bow tries to teach Glimmer how to play in the snow in this fluffy little one shot.

You will get the content I feel like producing and you will LIKE IT I’m kidding calm down you’ll get updates for the other fics soon too.

Anyway Chapter 5 of Prince Bow and Archer Glimmer is up!

What’s in this chapter? 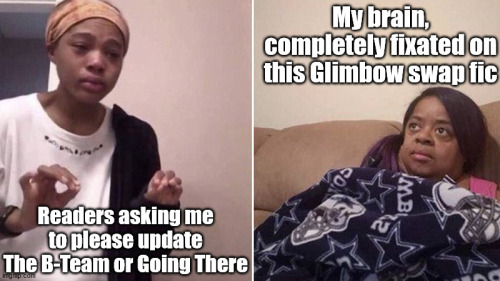 Finn sneaks downstairs the night before their birthday party and sees more than they should.

Perfectly G rated! Just a funny little bit of fluff with Finn, their moms, Uncle Bow and a simple misunderstanding.

This cute little one shot marks the first time I have ever written Finn’s POV… and also the only time I have written them not as a literal kitten.

You know the song? Yeah, this fic is just that… but with Mermista and Sea Hawk. It just fit them too perfectly and I had to do it!

It’s cute and fluffy and wintery and romantic GO READ IT!!!

Entrapta finds a horrifying abomination on Beast Island and wants to keep it as a pet.

This was my first time writing Entrapdak (and Hordak’s POV)! Go check it out, it’s cute and romantic!

FYI, though the collection rating is teen, this chapter is squeaky clean for all ages bc I wrote it for my Entrapta obsessed 7yo.

So I know you sent this around to a couple of fic writers and idk if that was a mistake or not but I’m going to take it in good faith that you just goofed and weren’t trying to spam.

I have seen fanart of Glimmer as She-Ra and it’s a cool visual concept but… and I say this as someone with like a zillion Glimbow AUs in my head, I am really not that interested in Glimmer as She-Ra mostly because she would probably end the world and it would be a very short story.

I mean, I love the girl, but still.

I want to second what @imaginationfanstar said on another instance of this ask and recommend @caramelaire‘s fic Come With Me for my absolutely favorite take on Horde Bow and Glimmer in a very similar dynamic to what you describe… just with Adora still being She-Ra.

I have a Horde Glimmer AU (that is only a one-shot right now but I will almost certainly be continuing once I finish some of my other fics bc I wrote a bunch more) and you will meet my take on Horde Bow in my Beasts AU but I don’t have any plans for either Bow or Glimmer to turn into She-Ra either time soon.

There’s so much to do after the fall of Prime and all the princesses are busy helping rebuild the planet. So much so that Scorpia has barely seen Perfuma and still doesn’t quite know where they stand. But when Scorpia forgets the planet-wide celebration for the six month anniversary of the end of the war, fate steps in to make sure they can both face the future… together.

This gets a wee bit angsty because I have a lot of feelings about Scorpia and it was my first time writing in her POV but it all ends up sweet and ROMANTIC AF.

Also there is background cuteness with many of the other ships and characters esp Glimbow and Seamista because I know my demographic.

I am super proud of this, go read it!!

Glimbow Swap fic where everything is the same except Glimmer and Bow switch places!

The swapped Best Friend Squad arrives at Princess Prom! There are several sneaky cameos in this section and the next and this part parts the first time I have ever written SWEET BEE so there’s that!

This has been a hard week at casa de Tippen so comments are greatly appreciated!

Season 5 from Glimmer and Bow’s perspective!

Glimmer is trapped on Prime’s Velvet Glove, millions of miles away from home with nothing for company but an infuriating Catra and her crushing guilt about what happened with the Heart. But her best friends are determined to go get her, assuming Bow can keep Adora, the rebellion, the ship and himself together long enough to get there.

It’s life or death, end of the world kind of stuff! So obviously any confusing feelings they might be having about their best friend are better off shoved WAY down deep to deal with… maybe never. Because even if each thinks they might have accidentally fallen in love with the other, now is definitely not the time to go there. 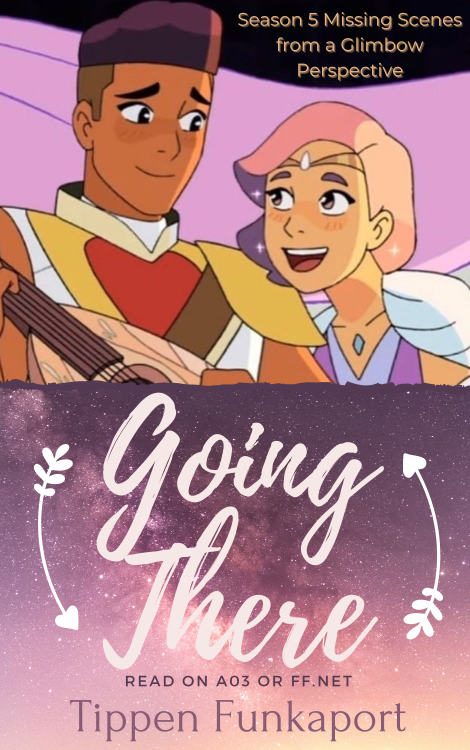 Rules: it’s time to love yourselves! choose your 5 (ish) favorite works you created in the past year (fics, art, edits, etc.) and post or link them below to reflect on the amazing things you brought into the world in 2020. tag as many writers/artists/etc. as you want (fan or original) so we can spread the love and link each other to awesome works!

I got an ask the other day that asked for my top three favorite fics and I said it would probably be a different list if you asked for the ones I am most proud of and, lo, now I have indeed been asked that.

And, honestly, I am proud of all of my fics or I wouldn’t have posted them but, still, let’s play favorites…

It’s been almost six months since I did one of these so it’s time once again for a fics update. Join me below for a list of everything I’m working on and what you can expect in the next few weeks to months.

As always, you can find my fics on  AO3 * FanFiction.net.

Here’s the TL; DR version: The magic went bad, the runestones disappeared, all princesses and sorcerers are presumed dead and Hordak rules the planet. Except the magic isn’t really dead and neither are the princesses… they’ve just been CHANGED.

Part of me really wants to summarize the whole thing to you but the rest of me trusts my ability to worldbuild and just wants you to go ahead and jump in and figure out what’s happening on the way down. If you’d like to do that, the first part, The Fire Prince, is up now.

Every time someone writes another Glimmer is immortal and has to watch all her friends die fic (glares because YOU KNOW WHO YOU ARE), I am forced to re-up this fic I wrote specifically to brain bleach the sad from those fics out of my head from the last time.

It’s called The Gift of a Lifetime and it has a near immortal Glimmer but NOBODY DIES and it is NOT SAD, dang it!