She’s insidious! So perfidious! That you haven’t even noticed! And the pity is (pity is!) (pity pity pity pity)

It’s too late to fix anything, now that everything has gone wrong~

It’s been Annabelle all aLONG!

(And I killed Salesa too!)

i’m not caught up on tma but from the spoilers i’m seeing….. if they try to do a thing like the ending of v3 and shame the listeners for enjoying fictional suffering as entertainment i will be a little pissed ngl

#tma spoilers#and ndrv3 spoilers i guess#i think the meta thing is cool but the moral angle is ridiculous#like i dont even listen to true crime because it feels weirdly exploitative... whereas tma is completely fictional horror#so i hope they dont do it
0 notes
thoroughlymodernhippie
Text

Annabelle: it’s a shame, you would have made a primo Web avatar.

Annebelle: because your ‘lovable dork’ persona is god tier manipulation.

This was my exact thought too!! But then I also thought you know the past year has been fucked up enough, maybe they’re already here

Would the “Tapes are the Audience” theory/ending fit Magnus and the themes it has been pushing? (IMO)

Now a good argument I saw was the fear of a meta plotpoint in a story that has so far NOT been very meta, which is why I’m pretty sure if this IS the route they’re going, it won’t be full meta. It will not sit there and go “I am a podcast and you are the audience and ain’t it swell how self-aware I am of this?” I’m pretty sure it’ll be subtler, more along the lines of “The tapes are conduits, a way for people from other worlds to leak in and listen if they so choose” and that’s it. You’re not gonna get Jon or Martin or Annabelle going “I hate being a podcast character” as funny as that would be. I don’t THINK they’ll acknowledge in text that The Magnus Archives is a podcast distributed by Rusty Quill and licensed under a Creative Commons Attribution Non-Commercial Sharealike 4.0 International license.

However, that being said, depending on how it’s played “This is a story, and is all being written by someone else, and you never had any free will or thought through it” COULD be an interesting and heartbreaking conclusion. But I would to put huge bold letters on that COULD because if done incorrectly this could feel veryyyyy cheap and just destroy the suspension of disbelief. I don’t think it would go that far, but it could still be neat

So yeah, I made a few posts about this before but this is the most concise. I’m fully team “tapes are audience” now, but excited to see where this goes regardless!

“I was going to snatch you away. Lure you both into this web, and then take you. Drive him to despair, so that when you returned to him, bulging, and talking in a thousand tiny voices, it would drive him to a final push. ”

so considering the way Annabelle phrases that ending, this idea is very unlikely as it sounds as though /she/ knows who listens to the tapes, but I was reading a post about them and suddenly had a thought.

Where do leitners come from?

We accept them as a part of this universe, and everyone has their opinion on whether they’re useful, what should be done with them, whatever. A lot of people thought one guy was responsible for them because he made heavy use of them, but in fact he barely understood them either. really the only explanation we’ve been given for their origins is that they just sort of… manifest.

So… I’m not confident that this is correct, but it seems like it would be interesting if the tapes weren’t actually a plot of any kind, a direct tool of anyone; no one in particular is listening, though of course anyone can if they find one. They’re just a way that fear seeps into the world.

Another thing: Martin implying that he and Jon haven’t slept on a mattress since staying at Upton House means that they didn’t have a mattress in the tunnels, which in retrospect makes sense but ALSO what even was their sleeping arrangement then????

Thinking again about “Mr Spider Wants More” from last week with the added context of Annabelle’s plan. The Spider clearly wants Something from Jon and I can’t wrap my head around what

Love how Annabelle refers to a vague “us” when talking about web things,,,,, yes babe spider communism

[ID: An edited version of the screenshot of the Doug Forcett frame from the Good Place, which is a framed image of a slightly smiling man. The plaque underneath has been edited to say “Geoffrey Neckam / Hilltop Road House / Closest Guess” End ID] 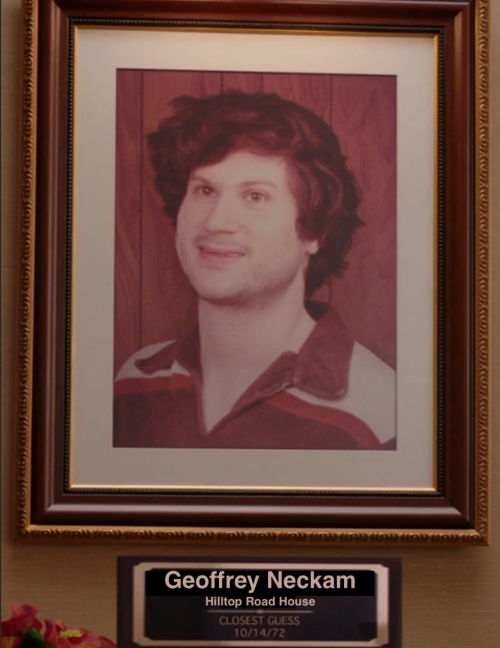 (Picks up mic) Martin didn’t think the spider statement in season 3 was that bad. However, now he says he used to like spiders and now he doesn’t. Something happened in between. Therefore it is my headcanon that he stopped liking spiders when he listened to Jon’s Mr. Spider statement, possibly listening to the statement while Jon was in the coma.

im not super convinced it’s us that’s listening to the tapes tbh. the way annabelle said it makes me think it’s someone martin - and by extension the audience - knows.

Istg if I have nightmares about being filled with spiders-

Hhhhholy shit that episode was good. Like, really good. It fit my theory that that little tidbit we got awhile ago about Hilltop Road being not quite in reality would be important, which got me excited. Not to mention how it basically answered the theory I saw about the tapes not being a product of the Eye, but of the Web. And it’s left me wanting more, as a wonderful episode should. I do find it funny though, how Martin asks for something a bit more dramatic, and how Annabelle Cain (am I spelling her name right?) did just that. Even if I don’t really like her, I do have to give her props