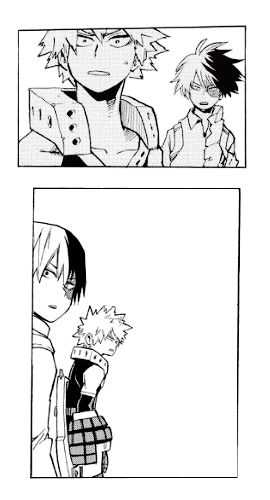 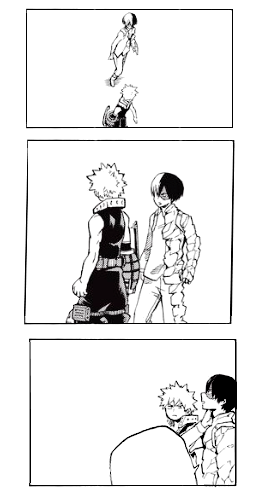 life is but a dream
by elijahx

“i’m just.. i’m scared none of this is real. that i’ll wake up and i’ll be in my bed at my father’s home, and none of this ever happened,” shoto finally admits.

katsuki finishes his sip of his coffee with a scoff, lowering his mug to hold it with both hands. “like hell none of this is real, icyhot. that’s about as likely as deku turning into a villain.”
—
todobaku month day 3

Todoroki in season 4 ep 25: His Start

#bnha, #mha, #my hero academia, #boku no hero academia, #mha todoroki, #todoroki, #todorki shouto, #bnha todoroki, #tododeku, #todobaku, #todomomo, #bakudeku, #kirideku, #kiribaku, #new episode, #endeavor, #bnha hawks, #my gif, #my gif edit, #bnha gif
542 notes · See All
sleepysenseisAnswer
look i'm just going all out with these prompts and will spam you with all the trashfire ideas my mind comes up with, feel free to ignore some of them XD anyway: Bakugou and Todoroki have to face a villain together. The villain in question is the dumbass who keeps unwittingly crashing their already-awkward-enough dates - Deku

This is the last fucking straw. It’s gotta stop.

Katsuki’s so fucking tired of this. So is Shouto if that twitch in his eye was any indication. Katsuki squeezes his hand in Shouto’s to calm both himself and his boyfriend. It wouldn’t do to get themselves kicked out of the restaurant they had gotten a reservation for months ago.

They’ve gone on a grand total of four dates. This is their fifth and he swears by his apron—he loves that ugly thing and would never let it go until he dies—that this bullshit is going to stop right here, right now or may the gods strike him down where he’s sitting.

Deku has interrupted three out of four of their dates thus far and it’s really getting on both of their nerves.

The first time was excusable. Deku needed backup to fight a villain so they did, both mildly relieved to be given an excuse to escape their more-than-awkward first date—there had been a ridiculous amount of blushing, fumbling, and stuttering involved. Katsuki’s just glad they’re already mostly over that at this point in their relationship. If it had continued, he doesn’t think he could live with the memory and would have probably died of mortification from the constant replaying of the countless embarrassing moments they had.

The second time was annoying as hell but they still let it slide. The broccoli-haired dumbass somehow fucked up his disguise and ended up on the run from his fans. Deku ran into them on their date and got them dragged into the chase as well when he shouted out their names for help, the dumb bitch. Katsuki feels a shiver crawling down his spine at the memory.

And oh the third date Deku had crashed. The third time’s the charm was it Fuck. Deku had interrupted a perfectly good romantic atmosphere. They were taking a stroll through the park as had been Katsuki’s rare, spontaneous, romantic ideas. It was peaceful. The wind was breezing through Shouto’s pretty hair. The sun had been in the perfect position to highlight Shouto’s face and mesmerizing eyes. Katsuki felt a welling in his chest that felt like love. And then. And then, Deku came jogging through and crashed their date, chatting about his day and asking about theirs. They hadn’t told anyone of their relationship yet but how fucking oblivious do you have to be to not notice two of your best friends inches away from snuggling and holding hands. Shouto, the bleeding heart, had seen how Deku’s eyebags had been more prominent than usual and didn’t turn him down the conversation. At least he hadn’t let go of his hand the entire time.

(They could give Deku some credit. Their collective exasperation over how he kept missing the signs that they were romantically—no, Katsuki definitely does not blush at this admission—involved and were clearly dating had been something they bonded over as much as they had in their actual dates.

That doesn’t mean they, Katsuki especially, had been grateful their dates had been interrupted, aside from that embarrassing first one, of course.)

They had gotten through scot-free on their fourth date, much to their relief.

Katsuki and Shouto had been apart for weeks dealing with villain organizations on virtually completely opposite sides of the city, just their fucking luck. They had planned this date for a while now, reservations in a quiet, private place that catered to high-profile pro-heroes, somewhere they could have their date without interruptions. This is the first time they had seen each other in person since their assignment to opposite sides of the city, damned if Katsuki didn’t do something about it. Damn it, Deku.

This time, Deku has brought Uraraka and Iida with him, just great.

Katsuki and Shouto are watching them at the corner of their eyes, hoping, wishing, just about praying that they wouldn’t notice them but it seems no one had been listening to their pleas when all three of them had turned their heads to their direction, their eyes lighting up with recognition. Awesome.

Deku makes his way over and greets them, starting a conversation, completely oblivious to Shouto and Katsuki’s hands clasped together over the fucking table, unlike the other two who seem to have actual functioning braincells and are looking at their joined hands in mild shock, but don’t seem confused that they are together. Hm.

“Deku.” That gets the interloper to stop his chatter.

“Yes, Kacchan?” He probably still has not seen the blatant declaration of their hands for some fucking reason. Best analyst for hero-related things he may be but it looks like on others’ relationships he was not.

Katsuki feels a pulsing vein in his temple and forces his annoyance back behind gritted teeth. He forces himself to talk lowly. It wouldn’t do to get kicked out of a place they had made reservations in a long while ago. It wouldn’t be good for their continued patronage of the place either. He exhales his annoyance through his nose.

“We are having a date.” Katsuki gives a pointed glance to his and Shouto’s joined hands. He sees Deku freezing immediately at the sight of their hands as if his brain had just blue-screened. Served him right, fucking date crasher.

Deku finally chokes himself alive again. “I’m— Hold on— Wait— What? Since when were you two together-together?” What is he? A kindergartener?

Katsuki breathes out again else he blows up. “Since months ago, dumbass. This is the fourth date you’re interrupting.”

Another pause. Then the deluge of words flow from Deku’s lips as he frantically bows in apology—are those tears in his eyes—, thankfully still not loud enough that others would hear. Uraraka and Iida didn’t look all that surprised at the admission, their shock at their clasped hands already faded.

Shouto interrupts Deku’s rushing river of apologies with a clear “It’s fine, Izuku. It’s fine. If you could just—” He vaguely gestures to his and Katsuki’s hands.

The sight of their joined hands again just makes Deku look to be gearing up for another flood of apologies but Shouto thankfully interjects before he could get started again. “We can talk later. We’re kind of in the middle of a date.”

That seems to do it. Deku perks up. “Of— Of course! I’m so sorry. We’ll be going now!” He waves his goodbye, Shouto reflecting the gesture.

As their group walks away to a farther table, Katsuki hears something about a “bet” from Uraraka’s mouth; he wants to hear more about that bit of gossip but he’s invested too much time to prepare for this date to let it fall to the wayside just for some gossip he can fish information about later.

Katsuki catches Shouto’s gaze over the table and squeezes his hand in his, a faint smile curving his lips. “Fucking finally.”

“Thank the gods. Let’s hope he finally leaves our dates alone.” Shouto’s lips curve into a smile in return.

“Now where were we?”

am i funny? that is the question

anyways, if y’all wanna shoot me some prompts send me some through my ask!! details here

ASK ME A QUESTION ABOUT ANY OF MY FICS

Rather it’s about the story itself or something that has been puzzling you! 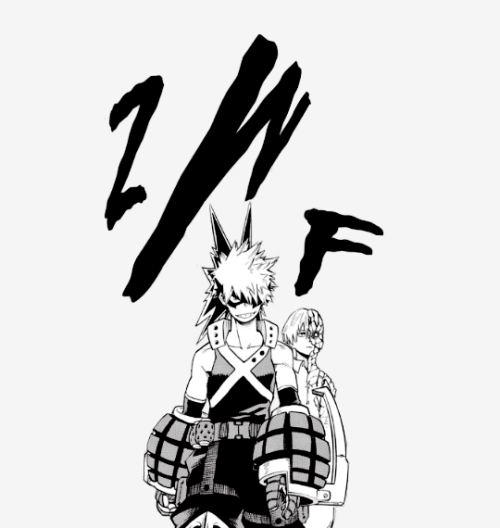 yooooo i’m gonna try and get chapter 8 out by next wednesday. not too bad i’ll let u guys know if anything changes. ok byeee

~ at the Sports Festival in 2nd year ~

Bakugou: i’m the greatest and i’ll definitely win. so jot that down

Todoroki: *looks him over* 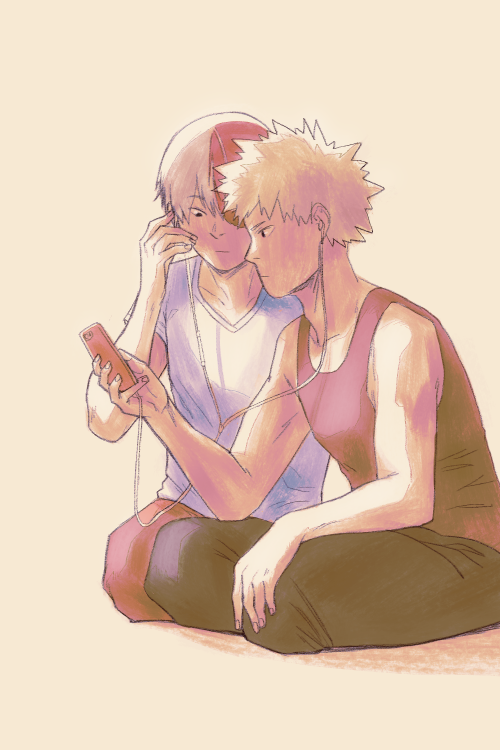 dance with me, baby! 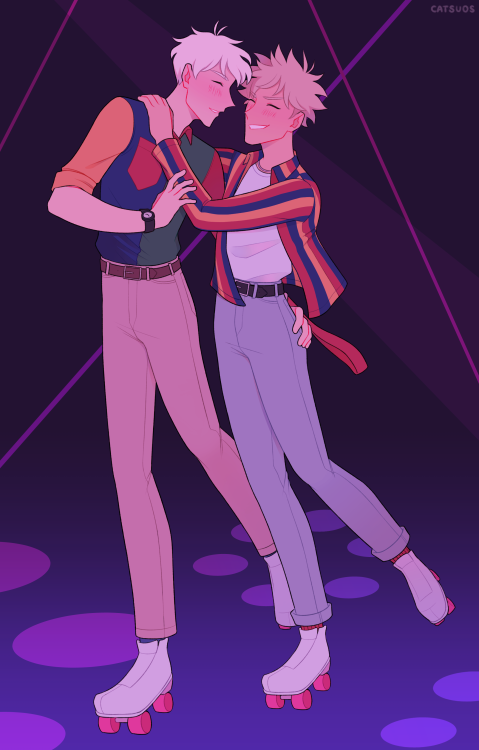 At the age 4, most people found the tattoo on their body. Small or big, everyone had it. Bakugou found his on the morning of his birthday. A beautiful, intricate pattern on his left shoulder. He was excited because it meant that one day, he would be able to find his soulmate.

At the age 16, he started seeing some of his friends find theirs.

At the age 24, the majority of his friends found their soulmates with the matching pattern that turned even more beautiful by the touch of the destined partner.

At the age 32, everyone he knew and was interested in soulmates had found theirs. Bakugou didn’t.

At the age 40, Bakugou had made peace with the fact that he would never find his one. He searched everywhere but he got tired of disappointments. It made no sense to torture himself when he was satisfied with his life as it was.

He wasn’t alone, not by the slightest. Bakugou had a good life. Some people would even call it perfect – a successful hero career, tons of adventures, loyal friends. He had it all. All except that one thing. He couldn’t find his soulmate.

… in the end, he was even thankful for it because it meant that he didn’t leave anyone behind.

#todobakumonth, #todobaku, #bakutodo, #bakugou katsuki, #todoroki shouto, #ethydium writes, #my fic, #my writing
37 notes · See All
imquirkyokayAnswer
Hey so I’m watching the third season again and it got me wondering.... do you think Baku getting k*dn*pped was like, the turning point for shouto? Like THIS is what made him realize hey i actually really care about this loud mouth gremlin heh whO KNEW

thats an excellent point but honestly?? no because he’s a fucking DUNCE. like the rest of the class is scared too so he’s in the mode of “we are all friends worried about our friend”

like i really think that he doesnt know he Like-likes bakugo until they kiss. and then he’s like “oh okay cool.” 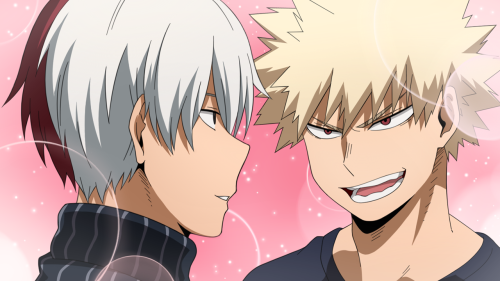 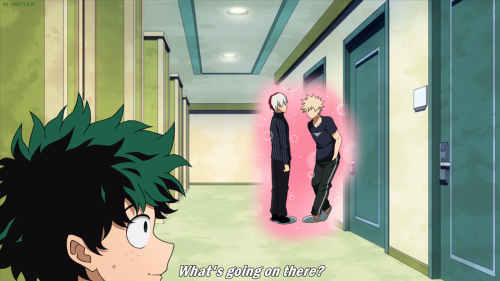 todoroki: do not fuck the virus.

I don’t know who needs to hear this but…

jiro, her boyfriend katsuki, and his boyfriend shoto