Izuku: do you know your eyes are windows to your soul?

It’s been a long time since i posted! Things are getting very stressful, but I hope everyone is ok! Since the last episode release, everyone has been talking non-stop about Hawks, and i needed a bit of a break from all the drama ^~^’. So,  i did a quick little Tododeku sketch and I thought I might upload it. I’m expecting to start uploading pages of a comic in a few days, so “stay tuned” for that . (also i was too lazy to give the boyz clothes, so i guess they’re naked? :p) 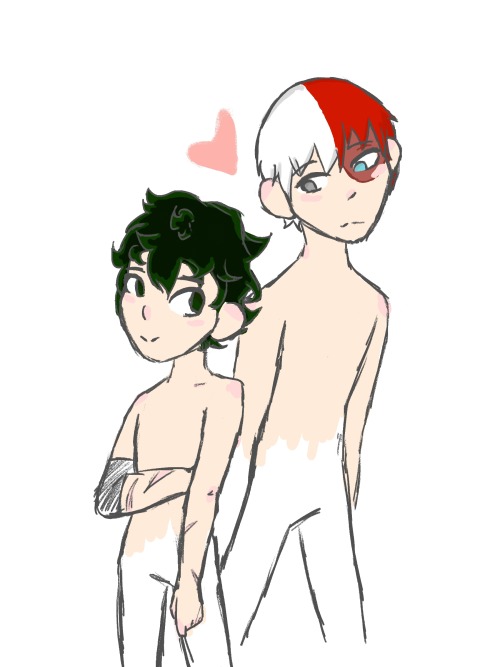 Temperature of the Heart
by Trenchcoatkitten

Two friends, both with a passionate love for skating, move to a new town - one to escape his past and the other to start a new school. Both make unexpected turns and meet people they won’t be able to forget, on the ice and off of it.

izuku and shoto are in izuku’s room and izuku is complaining about being bored, so he turns on music and starts dancing around the room. shoto is sitting there like an idiot bc he doesn’t know what to do. Then izuku grabs him and is like “dance with me!!” and shoto just stands there for a second not knowing what to do like he’s never danced before. then the dancing turns into more of a jumping around the room and kinda head banging.

TAKE IT OR LEAVE IT! jk…idk…i just want fluffy tododekus

Shoto couldn’t sleep again. images of fire and burning and his angry father’s face wouldn’t stop appearing behind his eyelids, making him uneasy in his own skin.

So he eventually gave up on sleep, deciding to tip toe quietly to the kitchen in search of a glass of water.

What he didn’t expect to see as he reached up to get a glass was Izuku slumped down on the countertop, cheek squished by his notebook and eyes shut.

Current work in progress! I’m rewatching My Hero for the third time and I forgot how much I love Todoroki?!? He was my first anime crush 😭😭😭😭😭😭🧡

Shouto’s life will be forever changed, for good or for worse, when he met him.
And it all started at a simple playground.

I realized Shouto’s bangs are in the shape of the letter M. M is the first letter of the last name Midoriya. Midoriya is Izuku’s last name. Izuku is the character that has helped Shouto become a better person and reach his full potential. Shouto is the person that has looked out for Izuku on multiple occasions and has offered advice, comfort, and even food, and has been there for him when he needs him. Izuku has also been there for Shouto and has offered kind words and knocked sense into him several times in the series. Shouto burst into flames and Izuku burst into tears in separate occasions and they were there to witness it and help each other up. Izuku may not seek comfort but Shouto is there. Shouto has sought Izuku out to ask him about things concerning him. Izuku can’t talk about it, but he nonetheless appreciates his care. Izuku can’t share the secret of his current three quirks. Three starts with the letter T, which is also the first letter of Shouto’s last name, Todoroki. The Todoroki family have gone through so much, a secret that Shouto has shared with Izuku. The fact that he has opened up to Izuku but Izuku hasn’t told Shouto may seem unfair for now, but it will sort itself out later, hopefully when Shouto can understand the weight of the secret of OFA. OFA is a stockpiling quirk that has been passed down through generations of heroes, accumulating power, strength, and quirks. Izuku is the 9th holder of this quirk, however he was born quirkless. All Might, his predecessor, was also born quirkless but improved the quirk and was the greatest hero in the world, #1. He caused the #2 hero, endeavor, to want to surpass him and in doing so abused his family, whom Shouto is a part of. Family is an important aspect in the story of bnha and Izuku may not have a father, but he has a mother and a father figure. When he grows up, he may have a family of his own, passing on the last name Midoriya to his spouse. Midoriya is the name Shouto says constantly and even automatically and because of the genuine love and care he has for Izuku, he may even come to have the last name he says so often. 😊

#bnha, #tododeku, #shouto todoroki, #izuku midoriya, #bnha rambles, #bnha spoilers, #this is the most roubdabout way for me to say, #that shoutos M shaped bangs means he will be a Midoriya in the future, #but i kept going and now i realize, #this kind of has the format to the illuminati theories, #lmfao, #why....why did i write this, #who let me
21 notes · See All
fun-dip-and-copicsText

@trenchcoatkitten asked me to draw some pieces for her fic Temperature of the Heart, so here they are!!! I had a ton of fun working on these!! Please check out Sami’s writing, it’s absolutely amazing!!!!! o((*^▽^*))o

Meeting the Parents: A real Endeavour
by MissLunar

But this, Shouto has to face alone. For his own sake, if not for other’s. The relationship he has with his father is turbulent at the best of times - and downright toxic at the worst - but he doesn’t want to always rely on outside intervention and Shouto is…not hopeful per se, he won’t let himself be hopeful, but if nothing else, he is curious.

Meeting the Parents: A real Endeavour
by MissLunar

But this, Shouto has to face alone. For his own sake, if not for other’s. The relationship he has with his father is turbulent at the best of times - and downright toxic at the worst - but he doesn’t want to always rely on outside intervention and Shouto is…not hopeful per se, he won’t let himself be hopeful, but if nothing else, he is curious.

𝐒𝐔𝐌𝐌𝐀𝐑𝐘 — y/n who is a known mukbang channel is developing a tiny (not really) crush on one of the hottest commentary channel on YouTube and is convinced he hates her guts.

Note : Hello! It me! I know the quarantine isn’t over yet, tbh the quarantine in my city just got extended to until the end of the month and I am so bored. But that’s not the case in the universe our lovely characters live in. How I wish I lived there. Anyways, I hope you stay safe during this pandemic. Please wash your hands and practice social distancing! My requests are open btw. My profile desc will give you the list of my fandoms 💖💖

Shouto’s life will be forever changed, for good or for worse, when he met him.
And it all started at a simple playground.

So, I went ahead and posted chapter 1 of that fic I mentioned yesterday. Figured might as well start getting that out there since it was being so nice to me.

As promised, here’s the link!

To manys request, I have finally gotten down to dubbing “Friend Todoroki” part 3 by https://friend-todoroki.tumblr.com/ please enjoy!

Let there be light! 💡

Everytime We Touch
by CrzA

Like quirks, soulmates were an intricacy of society. Some people theorised that they developed around the same time, that one early quirk manifested through connecting people whose fates were entwined in one way or another. Others said that it was far older than quirks, that it only got more notice when those developed and connections took on a more material and tangible form. Most people just accepted it as one of those inexplicable phenomena that no one had yet managed to fully understand.

Whatever they may be, Izuku knew he had a soulmate since he was young.