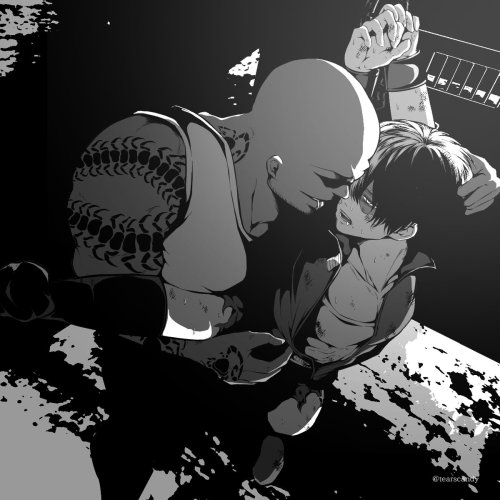 Yehhh, the cats are here again! Too bad I cant fit bakugou inside tho🥺

DEKU IS TOO CUTE AS A DOG! TODOROKI TOO! IF I KEEP SIMPING OVER THESE BOYZ I SWEAR I’M GOING TO AJDHKDBDJK

Midnight was with a box in hands with “lots” written on it.

“Now we’re going to do drawing to determine the pairings. So, contestants we’re going to continue with recreational events before beginning the tournament. The 16 participants from the tournament can choose to abstain from the recreational events if those so choose there’s no problem if you’d like to rest and save your energy. So, we begin with the team that got first place”

Midnight was interrupted by the tail guy, he raised his hand and said that he didn’t want to participate. While giving his reason everyone looked at Shinso.

Y/n puffed her now red wings and protected him from their stares.

Hitoshi smiled at that and petted head her “My hero” he said while smiling lightly.

She blushed and her wings got light pink at the tips. “You are my friend of course I’m your hero, and he shouldn’t give his chance like that! You did everything to win, they should too!”

He nodded at that, “Yeah I understand you, and how you feel, but they don’t get it, so whatever” he shrugs his shoulders.

Another boy from class B also resigns.

“IT SEEMS LIKE THERE’S A WEIRD REVOLT…” Mic said

For a second Midnight was with a dark look on her eyes “What innocent words.” But she smiles brightly while snapping her wip on the air “I… LIKED THEM I ACCEPT SHOUDA AND OJIRO’S RESIGNATION!!!!”

After that every participant name appeared on the screen, the winged girl could see that  Shinso would go against Izuku.

She poked Hitoshi’s cheek and puffed her on “If you don’t get him with your quirk your dead, you know that right?”

“Yeah, yeah” she slapped her hand away lightly “We both know that I can easily get on someone’s nerves, and by how the tail guy is talking with him, it’s easy to know he’s weak points”

“I know that! But still! You need to be ready if-”

“Look! I know that you care for me and stuff, but keep your worries at bay, I know what I’m doing” he started to walk away, but she grabbed his arm

“I know that! But you should make a plan if he-” yanked his arm back

“I know that my quirk isn’t as incredible as yours but you don’t need to be worried about me all the time I am not a baby!” he snapped at her, still not facing her.

“I just-… wanted to help…” she stepped back

“I don’t need pity from you, I can do this with my eyes closed” he waked away from her to talk with Midoriya.

Her wings got between blue at the tips, showing to the world the sadness that she was feeling.

Looking at the names she saw who was going with whom.

‘Oh! I will go against the fast guy! Then… if Shinso wins both Midoriya and Todoroki we will have to fight… But I really don’t think he will win against Todoroki, since his power already has been discovered… I shouldn’t think so low of him but… Todoroki is so smart’

“Uraraka?” Y/n look at Bakugo and them at Uraraka’s pale expression and pats her shoulder

“Good luck” Y/n gives her a small smile and nods at her pale faced friend. “You will need it”

“TRUE, BUT FOR NOW, LET’S PUT THE TOURNAMENT ASIDE AND FIRST… LET’S ENJOY THE RECREATION EVENTS!!” Mic announced

While everyone was trying to calm their nerves or preparing for the next battle Y/n was walking around the outside, and while at it she felt someone near, around the corner. That person was feeling anger and sadness, when she turned the corner she was meet with that same bi-colored eyes.

“What are you doing here?” He looked up at her

“I was just… walking around… and felt that someone was angry and sad, I though that I could help… sorry”

“Why are you apologizing? You literary came here trying to help someone” He tilted his head confused.

“No, thank you, if you win against Iida and against the 1-B girl we will fight against each other, I will not lose” He got up but before he could go away she held him back

“I ALSO WON’T LOSE!” her wings got full golden with pride and braveness, but the ones on the bottom refused to be any color but blue.

“I will see you at the arena then” he bowed politely and went his way.

There new chapter, lov u all and I won’t explain each fight, I will just tell her reaction, I never made fighting scenes before, so please be nice to me in the next chap
(Next chap Sunday woohoo)

So if Touya’s body has a resistance to ice and Dabi is Touya, then Shouto will have to fight Dabi with his flames because his body isn’t suited for it? And if thats the case, he will have to get his flame to temperatures as his Dabi?

Koruki: *gasps, wrapping his arm around Shoto* Did he get me the stuff??

Shoto: Yeah, he said he got you the clown costume, the power drill, and 12 gallons of blood.

Koruki: Wow! Where did your brother find 12 gallons of fake blood? Premise: Midoriya Izuku does indeed have a Quirk, but nobody realises. He’s got a fully jointed toe, so nobody questions it. All Might double-checks multiple times during his training, but nope. Can’t find anything.

People only realise that Midoriya has a Quirk during the Sports Festival when he’s up against Todoroki. After finally convincing him to use the fire half of his Quirk, the battle gets more difficult. Midoriya is breathing hard, flames get too close and -

Broccoli Child physically slurps them up.

Quirk: Flame Vacuum. Midoriya Izuku can inhale flames out of the air, effectively extinguishing them. Overusing his Quirk causes him to cough and become short of breath.
[A combination of his mother’s object attracting quirk and his father’s fire breathing]

Broccoli Child can swallow Splodey McBangBang’s explosions. Not fully from a distance, mind you; but at close range, he’s essentially Fire Eraserhead, since the explosion can’t go off if its ignition keeps getting swallowed.

Aizawa is tired. The classroom is lightly toasted. Kaminari is thrilled that electricity doesn’t count as fire.

As always, you are welcome to adopt a plot bunny

Shouto tells Momo to stay behind him. Automaticlly taking the lead and ‘protecting’ her. Momo dosen’t need Shouto to protect her, she’s got her own quirk and strength. She’s studying to be a Hero as well and I can’t help but wonder if Shouto did this because of his home situation?
I don’t think he would purposelly underestimate Momo or protect her but if Fuyumi has to frequently get behind him to avoid enji then its a habit by now. Or if he see’s himself as some sort of protecter for Fuyumi/Rei because if enji is focusing on him then he isnt paying attention to the rest of the todoroki’s.
Anyways I’m glad Aizawa corrected this and brought it to his attention that he was pushing her to the side and speaking over her.

#bnha, #mha, #this wasn't that deep but i made it that deep, #momo yaoyorozu, #todoroki shouto
3 notes · See All
teachussomethingpleaseravenPhoto

This is not the best drawing in the world. Can I do better? Yes. Would it take 8 hours? Also yes.

Happy Hallowe’en from Mina and Denki. 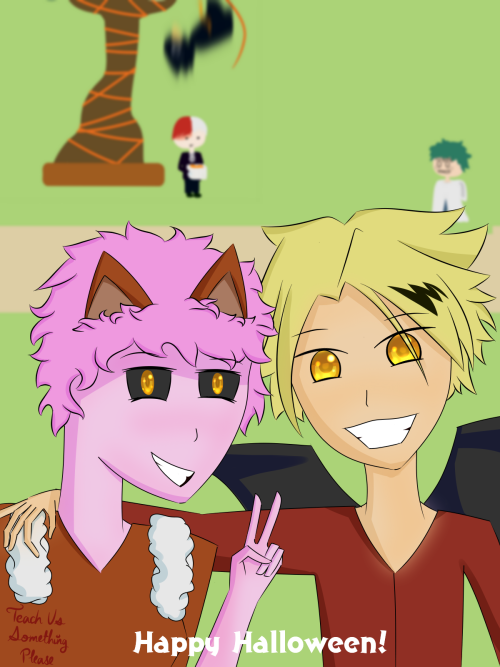 #art, #fanart, #digital illustration, #digital art, #bnha, #bnha fanart, #mha, #ashido mina, #kaminari denki, #I recently learned this child's surname is literally just thunder and I mean, #the people when quirks were just beginning to manifest must have been like, #hey that's mr fisher I wonder what quirk he'll have, #Quirk: Fish Attract, #He attracts fish, #that's it, #wow who would have thought it, #Featuring in the background:, #midoriya izuku, #todoroki shouto, #tokoyami fumikage, #(falling from a tree), #and that is why class 1-A can't have nice things, #next time I'm going back to two layers of shadow, #and highlights, #mina's hair needs highlights, #that's enough tags now, #goodbye, #HALLOWEEN, #I FREAKING FORGOT HALLOWEEN
0 notes · See All
oneslashText

Shouto just throws shade and salt at the slightest chance! He wasn’t even childhood friends with Katsuki yet He’s calling him out on his shit! Love it!

May they just chill out with cotton candy again…

•He isn’t really the type to approach people, so he just admires you from afar

•The two of you met when you sat at the same table in the cafeteria, and you and your friends asked his opinion on something

•First he is confused, then he is annoyed

•Because why the hell is he feeling this way? And why towards you?

•Sure, you’re attractive and seem to have a great sense of humor, but whyyyyy

•Bakugou doesn’t act on it at first, but when he feels like it’s getting really annoying and he can’t get you out of his head, he sits next to you in the cafeteria and kinda tries to chat with you

•It’s a pretty bad attempt at getting to know you, but you find it funny and humor him

Maybe Dabi has committed crimes and it’s just hard to catch him. Because fire quirk.

Also, Aizawa is in fact a ninja lol. He’s very badass and that’s amazing that he just has counterattacks like that. I suppose he has to in a world that relies on powers so often. People won’t be expecting it.

Okay Aizawa definitely knows what happened and is making a point!

Aizawa: you know what I mean right Shouto? You would never say, fight the Hero killer?

Or he has no idea and actually thinks his student were responsible. Which is also hilarious.

But what my mind sees is

I’ve seen a bunch of posts about this already but-

We all need some Todoroki appreciation over here!

Y’all, he’s carrying probably about 200 kg? 400 pounds, in other words. He catches Midoriya with his back- god. This kid. THIS KID.

He’s so panicked tho-