My next new book

Some of my favorites (:

1. (nothing really gay about it) by ADreamingSongbird

“If anyone had asked him what he thought he’d be doing at three that morning, Kirishima probably would have said “playing angry birds” or “making popcorn” or something. Definitely not playing wingman-slash-relationship-counselor to a hopelessly confused Todoroki Shouto.

This is so good and it’s really hilarious. We stan wingman Kirishima. Thi is from his point of view and pining Todoroki is perfect.

“When Todoroki slips up and does something he would never do, it becomes a common practice between him and Midoriya. He didn’t know it would end up like this.“

So cute. They’re so adorable. Sunflowerfaun has such a soft writing style. It’s a really good short fluff story.

“He would have ended up falling for Izuku at some point no matter what, he was certain. No matter what path life took him down he’d have still ended up here, not because of anything as elaborate as destiny or fate but instead due to the simple fact of inevitability. Because Izuku was Izuku and Shouto liked just about everything about him, couldn’t help but admire him and would always want to be around him, just for who he was.“

Another cute short one. Inko is amazing. SOUP.

4. Do you even lift, bro? by orphan_account

5. dancing around your smoke by thehibiscusthief

“Todoroki Shouto is a ballet dancer, and an excellent one at that.
So when he’s offered a class at a studio that focuses on modern dance, he’s…a little out of his depth.

Especially since Midoriya Izuku is around.”

I love dancer!todoroki and this is my favorite tododeku dance fic. Yaomomo is in this one which makes me crazy happy. Honestly, I don’t know what else to say, just go read it.

6. ever so gently by Quintessence

“’For as long as Todoroki could remember, touch was something to be avoided. Dodging blows in his father’s relentless training or curling in on himself and covering his face to try to hide from the merciless punishment for whatever transgression he had committed this time, touch was always pain, plain and simple. After his mother left, he was never held or kissed. No one hugged him or stroked his hair. People touched him to hurt him.’

Or, Todoroki gets a hug and his whole world shifts on its axis.”

he…  he took the hit himself… why? 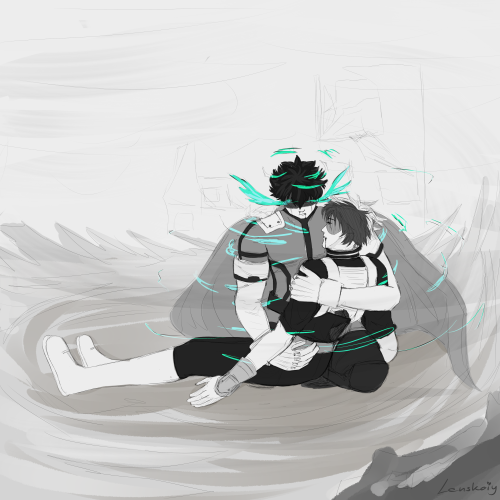 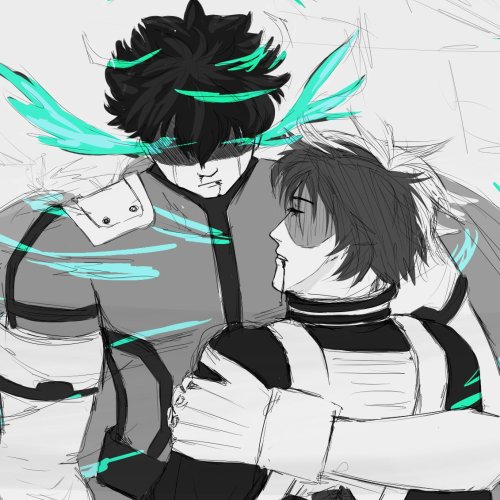 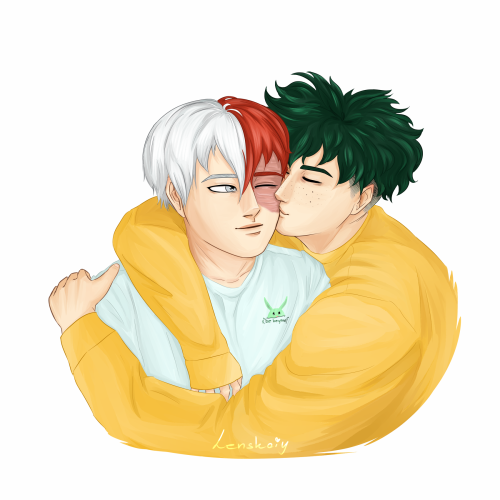 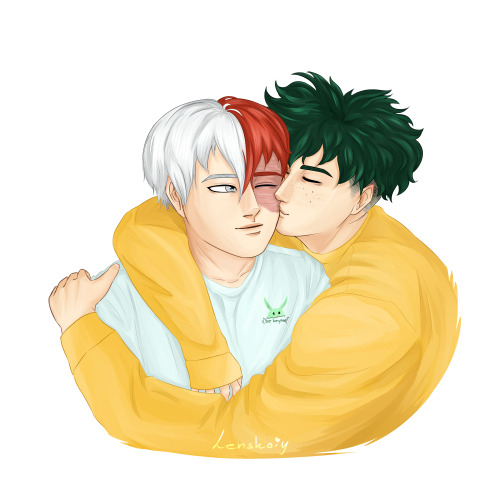 Also did some tododeku, because I ship, and I have a unhealthy obsession for todoroki (I’ll uhh.. Keep that to myself 👀) but yeah I felt like I did pretty good, I’m deciding whether or not I should do more ship art, and idk of whom if I do so like you guy’s your opinions mattterrr lemme knooowwww

TDDK stay together, one day called for helping one of them.

Todoroki: Endevour was being mean to me again last night.

Midoriya: You know what? I’m going to be your dad now. And your mom. Your… dom. WAIT SHIT NO!

Deku: *Rolls over* Are you awake?

Deku: *Rolls over* Are you awake?*

Bakugou: *Violently flops over* Bitch, The fuck you want?!

My personal guesses on the BNHA boys cock sizes

All Might: Okay okay hear me out, full size All Might’s packing. I’m talking thick as hell and 10 inches, not that he would know what to do with it. But Small Might? 5 inches, everything else shrinks it only makes sense.

Endeavour: He’s like a foot shorter than All Might, and he’s an asshole, but he still carries big dick energy. Like whip it out and smack a Nomu with it kind of energy, this man has zero fucks to give. I give him 9 inches and hella thick too. He’s second to All Might again lmao.

Hawks: I feel like he has less size but more skill, like 6 inches and not THAT thick, but average. But it’s curved to hit those good spots, and he knows a thing or two about foreplay to really help get you there.

Aizawa: 8 inches and thick. The man likes to nap most of the time, but when he DOES have the energy, my man would be kinky as hell. He’d definitely use his scarf in the bedroom, and he’d make you choke on his 8 inches because he’s a sadistic asshole… whit love of course. He also knows to praise after, as well as good after care.

Tomura: This boy has never seen a vagina, completely unskilled. Can barely jerk off without destroying things by mistake, but I feel like he would have 7 inches to work with, more on the thin side, there’s prettier cocks.

Bakugou: Also 7 inches, but thick as hell too. You’d need to make sure you’re prepped properly because have you ever seen this man show mercy? He would destroy and tease you and tell you just what you deserve from him. So you HAVE to be prepped before you let that gremlin NEAR your pussy.

Kirishima: 8 inches, not as thick as Bakugou’s but not small either. The boy doesn’t shave but it’s also not a jungle, and you KNOW he tried hardening it when he was like 13, and it WORKED. His cock is bigger when he uses his hardening, don’t even come for me. I feel like he would have had to practice and make sure there we’re no sharp edges, he never hardens while already inside his partner just in case it’s too thick or there happens to be sharp edging, he’d always stroke it first and make sure.

Deku: 5 inches, would be embarrassed if you made fun of his size, but the teasing and humiliation would also make him hard. Mostly useful in other ways, probably did as much research as possible to give you his best in bed. His mouth would probably be your favourite thing.

Tamaki: This good boy has 7 inches, not super thick or anything. Would think he’s nothing special especially because he’s seen Mirio’s cock and it’s bigger. Would need constant reassuring and cock worship, but you’d have a blushy boy.

Mirio: 8 inches and thick as hell, would feel guilty at how much you struggle to take it at first and provides lots of praise and prepping to make sure you’re as cared for and comfortable as possible. You’d have to beg and convince him to go harder, because he’d be scared to hurt you, but when he finally caved and pounded the hell out of you, you both would have the best damn time.

Dabi: 9 inches, truly doesn’t give a fuck if you’re begging him to push in slower. He preps you, but after that he’s bottoming out and you’re just going to have to adjust as his pace. Has staples around his hips that scrape and mark you sometimes when he’s rough.

Shoto: 7 inches and not that thick, was not as blessed as his theoretical brother. He doesn’t have a lot of experience but when he does do it with you, he’s slow and sensual. Would make you fall apart and orgasm several times in a loving kind of torture rather than a rough kind of torture. Your release is his top priority. Also his pubes are half and half PICTURE IT.

Kaminari: 6 inches, also curved to hit those good angles. Thinks he know everything because he watches mainstream porn, fingers you painfully… someone please teach him. It’s like his fingers are angry at you, you encourage him to use his mouth instead. Would be that asshole that shocks your insides, if you voiced that you didn’t like it, he’d take a bit of convincing but would eventually stop. That’s not how consent works Kaminari. If he knew pushing your limits truly upset you though he’d feel terrible. He’s just one of those guys with 2 brain cells that thinks when you say no he should try and convince you and show you that you’ll like it.