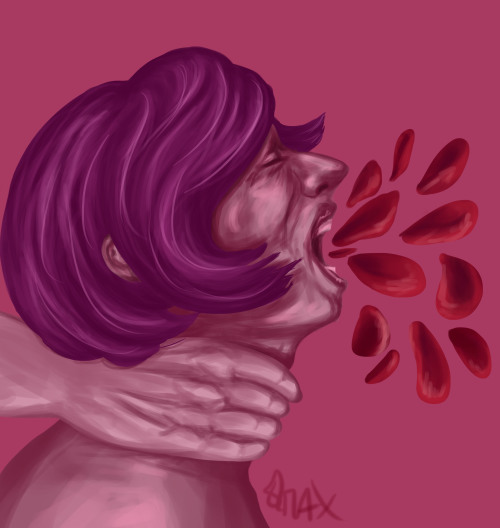 posted this on the wrong acc :pensive:

Hinami: Do you wanna hug

Ayato: No. I’m an evil, savage, sadistic and cold killing machine who couldn’t care less about what happens to you

He’s so close, so agonisingly close that for a moment his mind is clear again. There is no screaming in his head, no knife at his knuckles, no horrid, scratchy, crawling legs in his ear canals—just a clear, single-minded thought.

And then his eyes are gone, and nothing is left to ground him.

His own kagune—Rize’s kagune—twists and writhes, lashing out in all directions, but doesn’t make contact. It feels disgusting, like he’s pinned down on the blood red bed of flowers in a darkness made just for him. He’s bleeding from somewhere, where is he bleeding? He’s shaking and screaming, but he can’t hear himself over the sound in his head.

Kaneki’s lungs explode with the force of his pain, and the flowers are drenched in his blood.

hide in the final chapter of tg: re 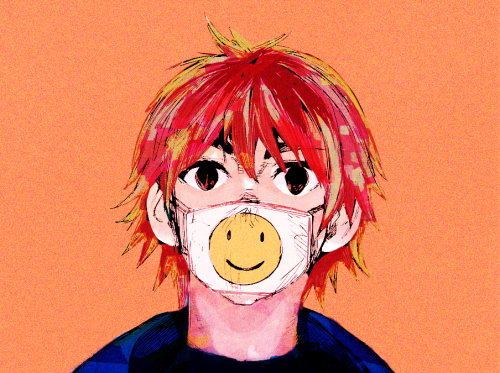 #tgedit, #dailyanime, #fymanganime, #allanimanga, #tokyoghouledit, #nagachika hideyoshi, #tokyo ghoul, #tg:re, #tokyo ghoul: re, #*mine, #*mine: coloring, #this is the panel that made me want to start coloring tbhh, #i love hide and i wish we had more time with him, #would love a ln with just hide, #he he more colorings that im unsure of but i wanted to do something for hide
4 notes · See All
thecottoncandyreaperAnswer

Huh… That’s quite a question to start with.

I’m not really one for romantic relationships or anythin. I have friends that I care about a lot! If that counts?

I mean there was someone… but that was a while ago… and it wasn’t even that long… that doesn’t count as love though… at least I don’t think it does? Maybe…

Deep in thought, his gaze drifted for a moment, before snapping back to reality. He gave a sheepish laugh.

Well, thank ya for the question! ^w^

Summary: Kaneki hurts someone he loves without trying to.

Author’s Note: This can be interpreted as either subtextually romantic or queerplatonic.

Less than 10 years ago, the idea of cleaning up a dead body would have repulsed Kaneki. As much as he liked horror, as often as he would leaf through Takatsuki Sen’s books and all the grotesque horror they contained with ease, Kaneki would have been horrified to be a part of any of that.

Now, Kaneki Ken never lost sleep over it. Cleaning up dead bodies was just another thing he had to do. They would rot, otherwise, and ghoul flesh was rancid meat, anyway.

Without looking, Kaneki hefted another body over his shoulder. Blood from the cadaver stuck to his battle suit but he did not notice; he was already covered in too much to distinguish one stain from another. At least it was not sewage, this time. Even still, Kaneki could smell the blood, faeces and who knows what else all around him. He was used to it but it was not a pleasant thing to get used to. Blinking up at the windows above him, Kaneki thought he could see the stars even from within the warehouse the group had landed themselves in. A nagging thought that they could be helicopters made him look away.

They had work to do.

‘Should I be worried?’ Gloved hands signed, even though it seemed kind of pointless. Hide always worried about him.

“No,” Kaneki said, voice lower than it should have been. When he looked at Hide again, the blonde was still looking at him questioningly. Kaneki cleared his throat. “It’s just stars out tonight.”

Hide smiled, eyes crinkling at the corners, and Kaneki found himself thinking back to late nights spent outside with his best friend, looking at the stars. He could never go back to that.

When Kaneki found him next, Hide was curled up on the couch of a place they had found (courtesy of a temporary friend). He had what looked like a book in one hand and a flashlight in the other, and he seemed to be reading it.

Somewhat rigidly, Kaneki walked over to him and took the space next to him.

Hide smiled awkwardly when he saw the half-ghoul, fingers adjusting his scarf.

Kaneki decided not to mention the fact he could still see a part of Hide’s scar, even in the darkened room. If Hide was happy reading by torchlight, Kaneki was not going to give him a reason to leave.

“What are you reading?” Kaneki asked instead.

Hide’s eyes lit up at the question. It made him ache.

Scrambling to get his hand signals together, Hide explained that he was reading a manga. It was one he had not seen in ages and he was surprised that someone – probably the previous tenants – had just left it here.

“What’s it about?” Kaneki asked fondly. It had been a long time since he had seen an excited rant about a manga (too long).

'Where do I start?’ Hide signed. 'There’s this kid and he’s living a totally normal high school life. But then he gets hit by a truck but he doesn’t die but his life gets turned upside down anyway. It’s like– it’s like that Kafka book you like but less of a boring snooze fest,’ Hide signed and Kaneki suppressed a laugh at his friend’s excitement and the little dig at Kafka’s Metamorphosis. 'I haven’t read this in so long. It’s a shame I never got to finish it, really,’ Hide explained, only stopping when he saw Kaneki’s face morph into something unreadable.

Lowering his eyes, Kaneki let out a small apology: “I’m sorry you didn’t get to finish it.”

Touching Ken hesitantly, Hide waited for Kaneki to look back up.

'It is just a manga,’ Hide signed lightly, slowly and emphatically.

“I messed up more than just a manga, Hide.” Kaneki admitted, sounding like he was scolding himself. “I messed up so much.”

When Hide tried to sign that it was okay – that he had nothing to apologize for – Kaneki grabbed his hand.

Hide narrowed his eyes and pulled out of the half-ghoul’s slackened grip.

'This was my choice,’ Hide signed, half angry and half pleading, at this point. 'I did this because you are my best friend.’ Now it was Hide’s turn to grab Kaneki to make him listen. Just this once. He needed Kaneki to listen. When he was sure Kaneki would not turn away, Hide let go. 'I did this,’ Hide signed, curling his fingers around the edge of his scarf, 'Because I love you.’

Ken looked at his greatest regret laid bare before him and did not cry. All he ever did was cry, and hurt people, so now he swallowed his doubts in pregnant silence instead. He could pretend, for Hide, that he was okay with this – okay with being loved more than he deserved.

When Kaneki nodded, eyes glassy, Hide relented for his friend. They had both been through too much in one night. It was a shame it was all for nought.

4. Honestly, I am not too much of a shipper. However, there is one ship above the rest that I cannot get over…Hidekane (ಥ﹏ಥ) I absolutely love both hide sunshine boi and kaneki babie boi and the two of them together is actually perfection :’) ♡♡♡ dont get me wrong though I do love touken as well

14. Everything I have watched and read I have actually liked in some way, but I did read a manga called ‘kakuriyo no yadomeshi (kakuriyo bed and breakfast for spirits)’ and I am completely caught up with it. While I thought it was really well-drawn and honestly really beautiful, the story has a heavy focus on cooking and sometimes it felt a little dull to read. But the characters are so cute so I didnt really mind too much. But it’s not my favorite :’(

#i honestly love everything, #so number 14 was hard to answer :'(, #thank you for asking!!, #ask meme, #my thoughts, #tokyo ghoul, #hideyoshi nagachika, #ken kaneki, #kakuriyo no yadomeshi
3 notes · See All
uwu-babygorlText

May i ask for a appearance matchup? Fandoms 2 haikyuus, 1 My Hero Academia,1 Tokyo Ghoul,1 Uta no Prince-sama

I think you would look great with Tetsuro Kuroo!

I think you would look great with Tadashi Yamaguchi!

I think you would look great with Tenya Iida!

I think you would look great with Uta!

I think you would look great with Cecil Aijima!

#GODFUCKING DAMN IT-, #*flips table*, #this world is so cruel, #just give me my hide...please, #tokyo ghoul, #hideyoshi nagachika, #tokyo ghoul hide
0 notes · See All
panarmybelikeText

I will never EVER stop talking about Hide. You guys dont understand how happy this man makes me