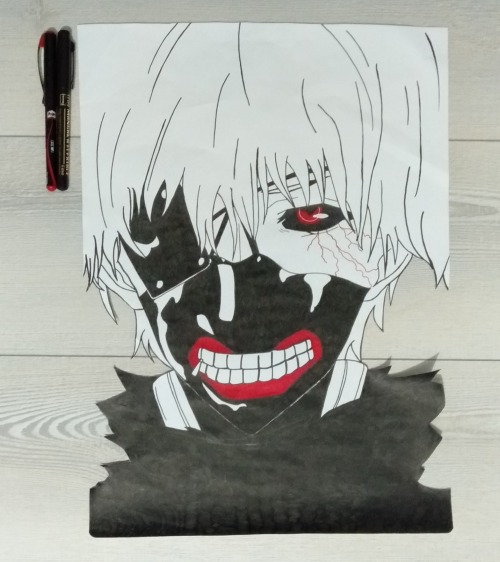 maybe this has been said before but in some ways juuzou can act as a sort of foil to kaneki/haise as in juuzou’s development in certain areas goes in the opposite direction of kaneki but on purpose and for metaphorical reasons.

I have actually read many posts on how mutsuki and juuzou are alike and different and even help to develop the other in opposite ways and I totally agree. But I’ve yet to come across one about kaneki and juuzou (but if y'all have then let me know! I wanna read that good stuff not even lying)

the first thing that got my attention was the obvious sign; their hair color.

kaneki starts off with black hair (his natural color) as a pure 100% human being. you could say that he is essentially at his most ‘emotionally stable’ (which is not really true up until the end) and in the most touch with his humanity at this point, not really having to deal with the biggest identity crisis known to mankind (but again, not necessarily true because of the way he might’ve misinterpreted and reimagined his mom when she was alive showing that he is nowhere near as stable as he himself would like to believe).

now it’s no surprise to the tg fandom that hair color is very important in tg especially the black and white transition. there are many analysis’ that explain beautifully how in tg black hair can be equated to humanity or stability or even old ways/habits and white hair to mental instability and drastically changing mindsets at least when it comes to ken.

that being said ken’s hair being black while human lines up perfectly with that idea. it’s not until he’s terribly tortured and pulled in a thousand different directions that his hair turns white (rapidly in the anime, slowly in the manga). under the unbearable amount of stress of his time with the aogiri tree, his mental stability is completely loose, completely gone. he is no longer black haired kaneki, he’s now this much more calloused, brutal, and utterly in pain white haired kaneki. white hair = pain? maybe.

that brings us to juuzou who is introduced already having white hair. if y'all have read the manga you’ll have seen in disturbing detail what the heck happened to babie boi suzuya. while it still kinda messes me up to this day, I wont say exactly what happens to him (you could probably search it up, I think it’s at the very beginning of vol. 12 of tokyo ghoul, not :re but y'all have been warned!) but suzuya had a God awful childhood, stripped of everything that made him human and essentially him. thus, he’s introduced already having white hair. we also know that juuzou is not truly mentally stable, at least not while he’s still white haired babie. also going back to the idea that white hair = pain and instability in tg, this white haired introduction makes sense for suzuya.

it’s not until tg:re when suzuya has a buttload of off-page and off-screen character development (a lot of it having to do with the aftermath of the owl operation and nearly loosing shinohara while also loosing his L E G did y'all forget he has ONE leg??) juuzou is reintroduced as not only a new leader of his very own squad and with new found maturity or maybe just deep seeded depression but also with guess what black hair!

now this was my realization.

around the same time that centipede would start to alter kaneki in unchangeable ways and pre-haise would start to lose his actual mind, juuzou is having the only major personality and maturity development. this is almost exactly completely opposite of each other. hence why they are foils.

while kaneki’s hair is in constant change mode, juuzou’s stays the same after it goes black and at no point does it come back to it’s original white color. does this imply that juuzou no longer changes or develops? not at all, in fact he has some major changes later in once again.

bringing us to the next point.

juuzou’s development cause him to become more and more reserved, quiet, and hopeless. he’s still eccentric but he’s no longer biting ears off and cutting ghouls up just for the heck of it. even his body stitching mellowed out and became more uniform and simpler.

kaneki’s development, however, is a m e s s. he goes from 0 to 100 back to 0 to 1000000 all in the span of like two chapters. he’s frantic and depressed and very indecisive. he gains his composure after the dragon incident, though.

as the two of them move throughout the manga, each doing what they believe is right and good, they seemingly move opposite of each other. kaneki develops deep relationships with tsukiyama, nishio, hinami, ayato, touka wink wink ooh la la, and ccg members like the quinx squad as haise, akira, arima, take, arima’s former squad members, and even with juuzou himself (you know we all wanted to see that juuzou vs kaneki fight but oh well)

whereas juuzou seems to distance himself from even his own squad and definently from the ccg and it’s current leader furuta whom he can sense is no good.

even in their healing, they’re opposite. it takes kaneki slowing down, getting a hold of his emotions, and killing Rize literally but also metaphorically to come to peace with himself while it takes juuzou coming to the end of himself and breaking down, letting his emotions out to gain a truer, deeper peace.

all in all, these two walk such similar paths and it’s just so interesting to see them so similar yet so different, dealing with unmanaged, unattended pain and trauma. kaneki had no one but himself and later hide to feel all his emotions. juuzou couldn’t even have proper emotions as he was raised by hard-hearted, selfish ghouls and not by feeling, emotional humans. and yet they both had to conquer that very threat in their childhood to feel whole again.

“You know, once I grow up… I want to be an investigator, just like you!”

“Eighteen years. Eighteen years have I been an investigator. And yet this is the first time I am faced with an opponent against whom…

I have no course of action.”

So this was originally going to be a dual drawing, her with and without her mask, but I didn’t want to put too much pressure on myself since my mental health doesn’t do very much atm

Enjoy the Black Dog herself!

Reblogs appreciated, reposting is not