I swore I wouldn’t post anything before I finished the book, but like every other word here is gold and I’m only on page 24.

Anyway, now I need a door sign that says:

“‘Tis a queer place, and its folk are queerer”.

Hopefully a shorter post today, as it’s a bit of an in-between day.

I have to say, I’m amused by how cryptic Gandalf is, and I have to think he does it partially for his own entertainment. Before he rode off the previous day, even if he couldn’t explain Huorns and Ents and be believed, he could have said, “I’m going to find the remaining so,diers from the Fords and send them to join you at Helm’s Deep,” rather than riding off without explanation. And now he could say that Ents have destroyed Isengard, but he doesn’t. I think he likes the effect that surprises have on people.

The Rohirrim, with Gandalf, Aragorn, Legolas, and Gimli, rest for most of the day, recovering from the Battle of Helm’s Deep. Near sunset they ride off for Isengard, going through the Hurorn forest, and Legolas and Gimli agree to visit Aglarond and Fangorn together after the war is over. They ride at an easy pace to the Fords, into the night; but on arriving there they find the river is gone. On the eyot (small island) in the middle of the Fords, the Rohirrim that fell at the Battles of the Fords are buried. The previous night, Gandalf sent some of Grimbold’s scattered men to make the burial; when they were done, they rode to Edoras to join Elfhelm. The Rohirrim ride a ways further north after the Fords, then stop for the night, and see smoke and vapour rising from Isengard.

Seriously, see what I mean about Gandalf?

[At the Fords]: “This is become a dreary place,” said Éomer. “What sickness has befallen the river? Many fair things Saruman has destroyed; has he devoured the springs of Isen too?”

“So it would seem,” said Gandalf.

[Later, when they have camped for the night]: “There is ever a fume above that valley in these days,” said Éomer. “But I have never seen aught like this before. These are steams rather than smokes. Saruman is brewing some devilry to greet us. Maybe he is boiling all the waters of Isen, and that is why the ruver runs dry.”

“Maybe he is,” said Gandalf. “Tomorrow we shall learn what he is doing.”

In the night, the Huorns that were at Helm’s Deep go back north to Fangorn, passing by the camped Rohirrim. The river also begins flowing again in the night.

On the same day, Merry and Pippin watch the flooding of Isengard. In the night, the Ents stop sending more of the Isen into Isengard and send the river back into its original course; the water level in Isengard begins to fall from that time on, likely leaving through some underground passages.

Frodo and Sam reach the desolation on the outskirts of Mordor. (It’s somewhat reminiscent of the des ription of the Anfauglith in the Lay of Leithian.)

Frodo looked round in horror. Dreadful as the Dead Marshes had been, and the arid moors of the Noman-lands, more loathsome far was the country that the crawling day now unveiled to his shrinking eyes. Even to the Mere of Dead Faces some haggard phantom of green spring would come; but here neither spring nor summer would ever come again. Here nothing lived, not even the leprous growths that feed on rottenness. The gasping pools were choked with ash and crawling muds, sickly white and grey, as if the mountains has vomited the filth of their entrails upon the lands about. High mounds of crushed and powdered rock, great cones of earth fire-blasted and poison-stained, stood like an obscene graveyard in endless rows, slowly revealed in the reluctant light.

They had come to the desolation that lay before Mordor: the lasting monument to the dark labour of its slaves that should endure when all their purposes were made void; a land defiled, diseased beyond all healing - unless the Great Sea should enter and wash it with oblivion. “I feel sick,” said Sam. Frodo did not speak.

…They came to a wide almost circular pit, high-banked upon the west. It was cold and dead, and a foul sump of oily many-coloured ooze lay at its bottom. In this evil hole they cowered, hoping it its shadow to escape the attention of the Eye. The day passed slowly.

It’s worth remembering that this is the land that, during Aragorn’s later march on the Black Gate, some of the men of Rohan and Gondor can’t even bring themselves to enter. Yes, they’ve never seen any place so horrible before, but neither have Frodo and Sam. So the hobbits deserve a lot of credit for even being able to keep going.

In the evening Gollum has a major internal conflict, and decides to take the hobbits to Shelob in order to get the Ring. Sam overhears, and for the first time understands that the real danger is Gollum’s hunger for the Ring, not regular hunger and the risk that Gollum will want to eat the hobbits.

During the night, the hobbits walk the rest of the way to the Black Gate; twice, Nazgûl pass overhead. (It seems a little strange that Sauron is using his most dangerous and terrifying servants mainly as scouts and messengers.) Gollum is particularly terrified, and certain that Sauron has found them, and only keeps walking under duress. 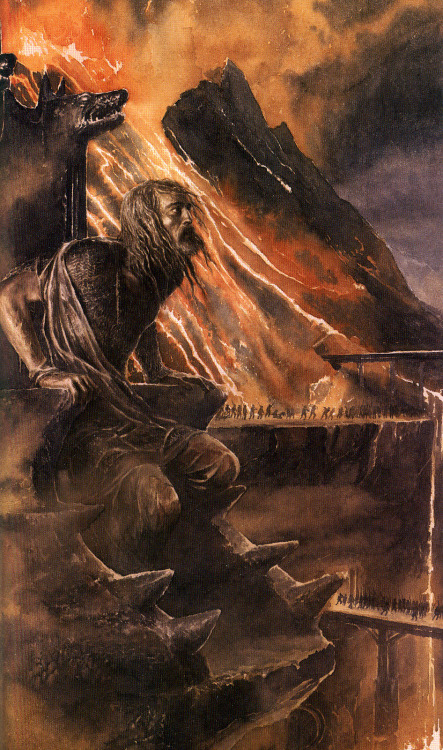 Eventually after a very long time spent in Valinor the Yavanna does give them an offer on behalf of the Valar to restore their sight complelety, they eventaully decided not to take them up on the offer.

At first, Thranduil was going to get his vision fixed, until the thought of getting rid of the only physical thing that seemed to represent everything he and Ferdan had been through together. As much as he had hated the one sided blindess in Middle Earth, Thranduil found himself…. somewhat fond of it in Valinor.

Ferdan never really even considered the option as a possibility, he doesn’t see the reason or have the need to erase his time or his life in Middle Earth. In fact, he’s quite proud of it and everything he did and took part in.

He said nothing to sway Thranduils decision, but was secretly extremely pleased that his best friend kept their matching scars.

POV: You’re trying to impress Findekano but your brothers are fooling around in the background.

thranduil: what are you doing in my swamp woods

YES. oh my goodness yes, I love this. This is hitting all my Snow White raised by the Dwarves vibes so heck yeah. And You know what, it’s an AU, she’s the Arkenstone now., it just makes sense. She’ll go back into dormant mode when Smaug takes Erebor, but she’ll wake right back up to give everyone a piece of her mind when Bilbo tries to give her to Thranduil.

I find myself in times of trouble…. binge watching (and reading) the LOTR trilogy.

thus aredhel rode alone for several days, and the hunting and the fireside and the solitude were more of a home than any palace had ever been. and this roaming was in part because of her father, for fingolfin would still always be nolofinwë helcasúlë, and while his children were less maiar than he, still they had the strangeness in their blood. so aredhel did not have to worry about the cold as much as others might, and it was never hard for her to find water. and if perhaps she sometimes whispered a song to her arrows, and sent frost up the flanks of a deer she hunted, well. she was fingolfin’s only daughter, and the white lady of the noldor, and that was that. 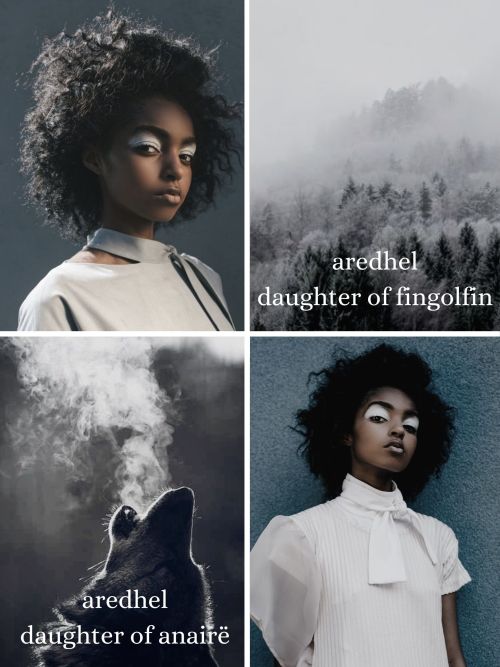 I don’t know of any sources, so I only have my feelings to offer, here. And so: I feel like a man who crafted stories to tell to his children with such love would respond kindly to the enthusiasm that would make someone learn his languages. And he worked so hard on those languages that I’m sure he’d appreciate people putting in the time and energy to explore the entirety of what he created. My instincts say he’d probably also hope people didn’t limit their lifelong study of languages solely to conlangs, but that’s neither here nor there.

The thing about the Kili/Tauriel ship is that I think we can all agree it is, in its original purpose (create a weird love triangle as a selling point for the hobbit movies), pretty bad but the “I love my wife” dynamic of fanon is absolutely incredible

A drawing from last august I found in my iPad, that I forgot to upload. Fingon and Maedhros in their armour before tragedy strike

Thoughts about chapter 2 of The Hobbit from my 9 and 11 year old:

-The trolls are like corona virus… they ruin everything

-Why did Bilbo try to be brave before he was ready?

-Gandalf was terrible and useless in this chapter

-Gandalf telling Bilbo to move his booty is WAY more interesting than how they did it in the movie!

- I could totally beat up the trolls (sure buddy)

So I looked at my followed tag today and saw that it had shot up to 500+?? And just–wow!!! Thank you all so much!!! You’re all so incredibly kind and supportive and I never thought I’d have this many people like my work!

I’d like to do something special to mark the event, like a comic, and I’ve had a few ideas but I’ll let you all vote on which one you want. My spring break starts on the 8th so we’ll make that the deadline for votes so that I can’t get to work on it over the break!

So yeah let me know in the notes what you’d like to see and thank you all again!!

Lil Frodo sketch, long, long before he had ever known what it was to truly suffer

[Image Description: a digital drawing of Frodo, a young Hobbit. He is standing in a patch of grass, looking at a butterfly. He is wearing suspenders, a rolled up shirt, and short pants. He has curly hair and a happy expression. One hand is in his pocket, on is at his side, angled outwards. The whole sketch is done in black and white, in a style reminiscent of charcoal or rough pencil work. //End Image Description] 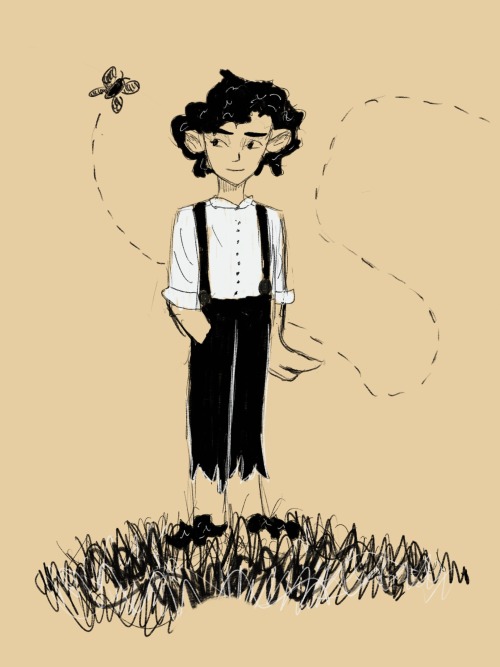 ninquelótë; the white blossom, fairest of the maidens of the west, and wife of isildur. she was one of the maidens who tended the tree of númenor before it was burned in the golden temple. she helped isildur steal one of its seeds, stayed by his side as he lay wounded, and when he awoke he married her. she fled the downfall with the faithful exiles and became the first queen of gondor. she died of grief shortly after isildur’s death.

#anyway i thought it was very thematic that isildur's wife would like#be named after the white tree and sharing its attributes#she is regarded as an elvish beauty for her silver hair and fair features#i also had an au where she is actually like an incarnation of the white tree#and once she dies her spirits inhabits the tree itself#to watch over gondor and its kings for as long as it stands#similarly to the spirit of the anduin :)#jrr tolkien#tolkien#the legendarium#middle earth#akallabeth#numenor#textual ghosts#isildur's wife#my ocs#my art
17 notes
purplenickel
Text

So far my only and dearest goal for HRT is to look like a tolkien dwarf i wanna braid my bread into my hair and have elaborate hairstyles with jewelry intertwined.

Its all i want in life