Photos of a tomb, the main entrance to All Saints Church, a bricked up doorway and an unused side door. Taken using a NikonB600

The tomb was looted, but with a separate find, a 2 meter high marble throne.

Numerous embossed and gilded flowers and animals, as well as statuettes of daughters adorn almost all its visible parts. Between the legs of the throne there is a frieze with embossed gilded griffins that crack a deer. On the side there is a similar frieze with lions and griffins. At the bottom of the backrest and on the backrests of the throne were placed small marble all-embossed sphinxes.
Pigments such as cinnabar, lead white, red organic lacquer were used and the composition was designed with a blueprint. If you missed my stream today, that’s ok!

The VOD of the stream is up on my YouTube!

Did this Fanart for Tomb Raider.
Started it ages back but never finished it. Finally got around to taking a crack at finishing it.
Came out Decent! Im Learning little things as I go.

It Our Favourite Heroine getting her explore on and keeping dangerous atrifacts from falling into the wrong hands! 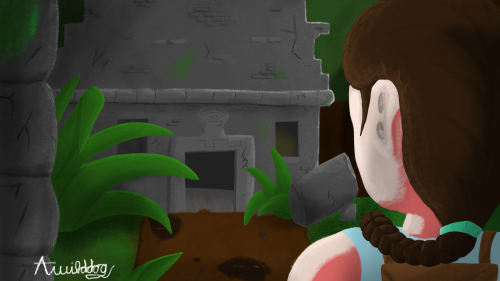 The rock carved tombs of Mada'in Saleh in Saudi Arabia 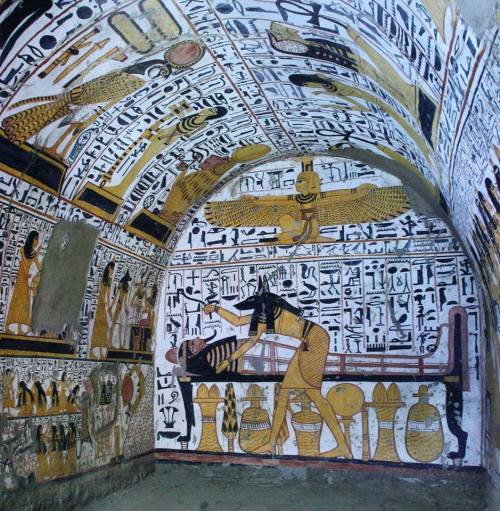 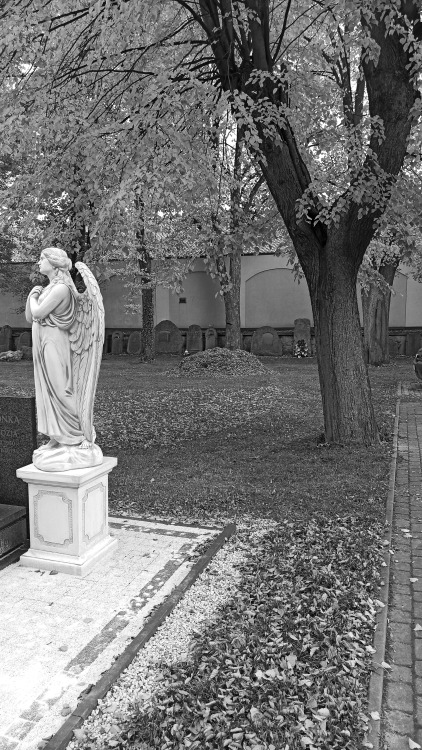 If you missed my stream today, that’s ok!

The VOD of the stream is up on my YouTube!

II. She BECOMES A GODDESS

Strange winds from the uttermost heavens swept the tomb,
A mystery and a mercy, still unknown.

The ghost of Caesar swayed like a weed in a storm.
And his flaming wound was great in his shadowy side.
Still the steady hand of Thoth was trembling
Amid his proud, unfaltering picture writing.
He shook his Ibis-wing, nodded hiShead: —
For the log had well-nigh changed into the goddess.
And the wisest woman of all the mothers of time,
Still the secret favorite of shrewd Thoth,
Heard now with him the rumours of all nations.
(For these two could apprehend and prophecy
Further than all those basalt gods there brooding,
Further than Set, the accuser of gods and stars.)
Strange winds from the uttermost heavens and uttermost tombs!
Dim dreams on the march above the universe!
Miracles on the edge of the Dead Sea!
The little river Jordan roared like doom!
There were shoutings and hosannahs among small peoples!
Wild fishermen on the Sea of Galilee!

Even Anubis lifted his jackal head.
There was the incense of a more merciful empire,
The beginnings of terrible justice, in the air,
Greater than the mercy of Osiris!
His power was waning in the Universe,
A power was gathering from the deeps and the heights.
As a great storm, this power was whirling down,
Blowing through mountian ribs, as through silk veils,
Potent to make real gods, even of these: —
Who sleep on shadowy thrones, whose words grow gray,
Whose ribs are basalt and their faces basalt,
Cut by the hardest chisels of proud priests.
Their hearts were softened while their thrones were shaken,
There on The Terrace Of A Million Years.

And the cry of Anubis came like a temple gong.
And the cry of the woman rang through the dusty hall,
With the musical voice of all the mothers of time: —
“Oh gods of mercy and of majesty,
Oh gods of softening hearts and trembling thrones: —
When first I came to this my dark tomb door,
When I came clamoring for my goddess throne,
And Caesar knocked with me, a suppliant here,
You set him free, you sent him to the skies,
To mourn for me, to wait for me in vain,
Through years and years, and moments like centuries.
Give us our thrones to-day beside your thrones!”

Still Set was opening his mouth in scorn,
“Your rumour is your soul, your name is you,”
She stretched frail arms toward all the gods and thrones
Arms at last unwrapped from mummy bands,
And sang above Set’s accusing voice
With the voice of a child arising from long sleep,
“Why should the gods of Egypt believe the eternal Accuser,
Or the lying poets of Rome?
These were the slanders of Rome.”

Still Set cried on with his eternal spell,
With the old charge that would not be put down: —
“Your granite hieroglyphic, still is you!
The written rumour of your name is you,
To the farthest caves of long reichoing time.”

The forty-two assessors and the twelve great gods of Egypt
Were growing very old. And their daughter, the pale queen,

The last of royal Egypt, was thwarting the Great Accuser.
They watched with increasing flame in their vague, hot eyes
(Flame like the goldsmith’s furnace melting brass)
Her still uplifted arms, her advancing step,
Her gentle increasing strength, as the years rolled on,
The years and years, the moments like centuries.
They saw from their rocking thrones, unafraid, unsmiling,
That the Feather of Truth fell not from the balance,
The flaming heart fell not. But it whispered still: —
“I am the heart of Caesar, nothing more.”

Privileged doubter of all gods and stars!
Privileged prosecutor of gods and stars!
Privileged scourge of men, and gods, and stars: —
Set cried boldly: “Still you are Cleopatra!
Still mongrel in Egypt, like yonder Alexander!
Upstart! Parvenu! Usurper!
You are shamed in the eyes of all the women of time.
Gambler, Thief, Poisoner and Betrayer!
The world will believe my word in the mouths of the poets,
And these gods will believe all the golden slanders of Rome!”
Barking his terrible bark, he waited and harried,
With his ravening hungry monster at his side —
Set, who had broken the heart of holy Isis
Once, in the far beginning of the world: —
Set, who had murdered, then tried the good Osiris,
Before this very court of the basalt gods
Still stood unsmitten in the Osirian court
Though The Merciful King, now at the top of his stairway,
Ruled, and justified all the pure of heart.

Strange winds from the uttermost heavens swept the tomb
Blowing through mountain ribs as though silk veils,
Then all the old years fell from The Merciful King,
New youth came with new mercy to Osiris: —
He, First of the Westerners, lifted his shepherd’s crook,
Isis, The Mother, lifted one slender hand,
Thoth, the Great-hearted, lifted his Ibis wing
To the very roof of the black basalt hall.
And the walls were as the walls of the great full moon.
And that Macedonian Cleopatra
Glorious aShera, blazing like Psyche the bride,
Was dressed now in strange spiritual snow-white.
And so, transfigured, and with power transcendent
In her arms, the little child, Caesarion: —
She fixed her eyes on mighty Alexander,
With the gods, a stone-carved son of Amon-Ra,
On the Trembling Terrace of a Million Years.

She prayed, with Caesar there by her snowy shoulder: —
“Oh son of Amon-Ra, called the Macedonian, —
Oh one man Caesar envied, Oh, Alexander!
Oh conqueror, your great mother bore you
To Egypt’s golden sun-god long ago.
And so it was you came to take your kingdom
In our beautiful oasis, Sekhet-Amit,
And there it was that Amon-Ra came down
To claim you, and my father, Ptolemy,
As Egypt’s kings his Macedonian sons!
You set my fathers on Egyptian throne,
Giving, in love, their queens to Amon-Ra.”
Then Caesar, Caesarion and the queen
Prayed toward the basalt throne of Alexander: —
“Give us our thrones to-day, beside your throne.”

He stretched his priest carved arms in miracle,
Stepped from the swaying terrace in strange might,
Stepped from the terrace with that wild assurance
He once rode trembling lands and fearful seas,
A blazing sun, hidden within that tomb,
A god and king and peacock of the world,
Unshaken, though the heavens and earth were shaken,
Caesar, his brother, there, eternally.

He gave into each right hand the terrible lotos,
That sends forth stars and suns in yellow pollen.
He gave them on their foreheads, holy seals
From the lotos cup of the Egyptian heavens.
The God-cup there ended the thirst of the dead.
And the flaming wound in Caesar’s side waShealed.
And the terrible lotos blooms dropped stars like jewels.
Gone was the hieroglyphic of Cleopatra
From the tomb-walls and from the coffin-lids.
Gone was the fabled wife of Antony.
Gone was all former meaning of her name.
The blood of Mecedon had left her veins.

Her ears became the tiniest humorous calf’s-ears,
Like sweet and humorous Hathor’s masquerade,
When she dances among the half-grown girls and boys.
Then her white robe fell like snow blown from a cliff.
She stood there the brown Hathor, Queen of the Nile!
An airy, girl-Egyptian, full of whims,
Tender, innocent, marvellously young —
A black-eyed girl with body of tawny gold.
But still she cried, and her heart from the iron scales cried: —
“Cleopatra died when Caesar died.”

Leaving the scales, where for long years it had waited,
Her heart flew back to her breast forevermore,
Justified! Justified! Before the good Osiris.
The Name, “ Osiris, ” now blazing on her breast,
As on the breasts of Caesar, and her boy.

Thoth cut the great verdict on the wall,
And the new names of the Queen, that the great gods cried,
Picture-names they invented each new hour: —
“Eyes-of-Love,” “My Lady-Is-As-Gold,”
“Beautiful-Kitten,” “Little-Wild-Lion-Girl.”

The law’s delay among the gods was ended.
Caesar, with the perfect eye of the elder Horus,
Wearing the ancient crowns of the south and the north,
The Queen, clothed in the ravishing form of Hathor,
And their beautiful son, the heir, Caesarion,
Heir of Egypt, Rome, and the purple seas; —
These three, the last of the Egyptian Triads —
Flamboyant, triumphant, magnificent,
Chanted “The Chapters of Coming Forth by Day,”
As in old days, chanted the golden chapters.

The “Words of Power” swept through the dusty hall,
Fulfilling there all the magic of Thoth,
The love of Osiris for the wise and just,
The love of Amon-Ra for his little children, —
Vindicating that strange wind from heaven
That still as one more mystery, shook the tomb.

There, there, was more than Egyptian resurrection.

She Becomes a Goddess - 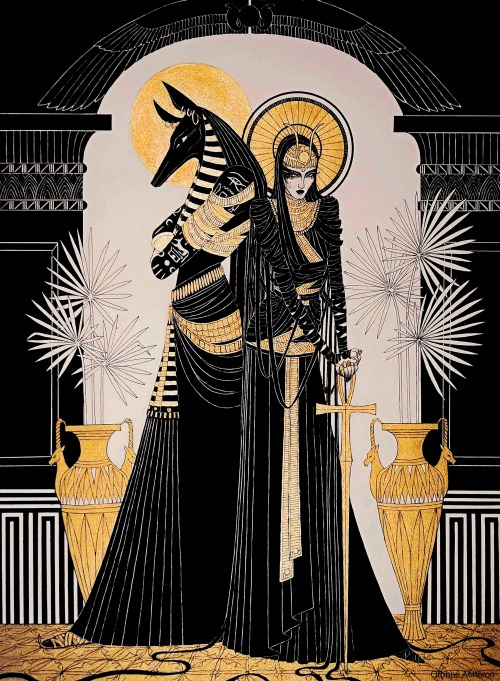 Can you tell apart

reality, from a bad dream?

Aren’t they one and the same? 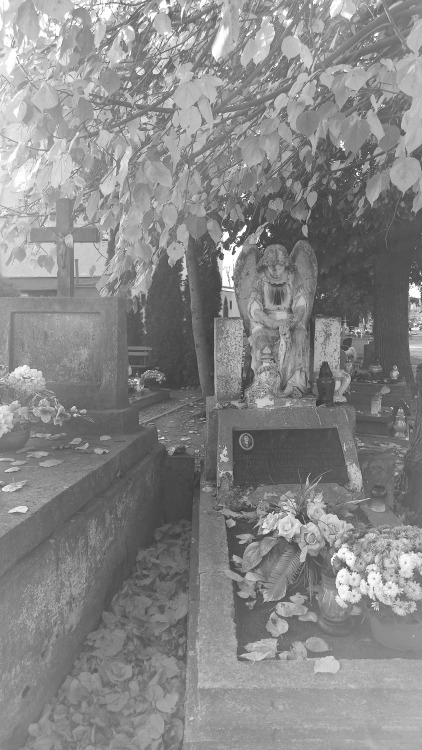 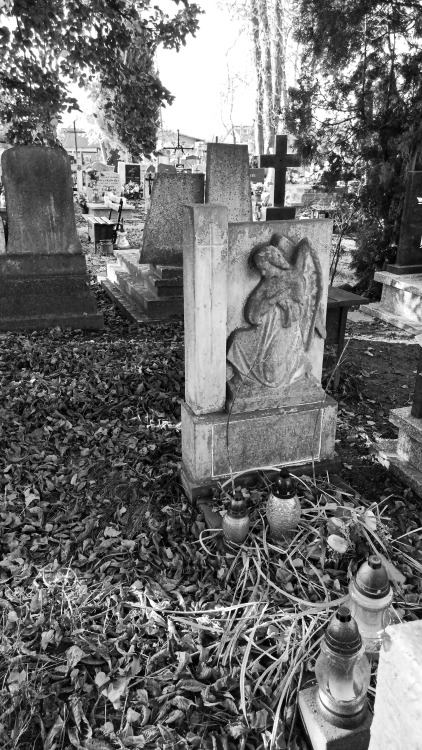 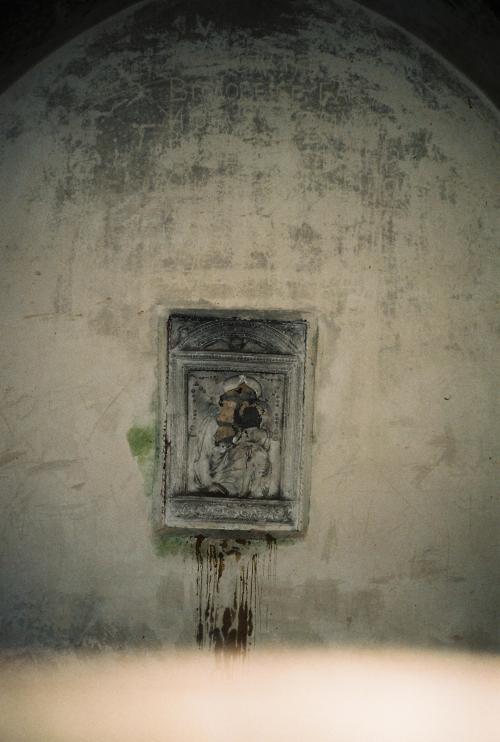 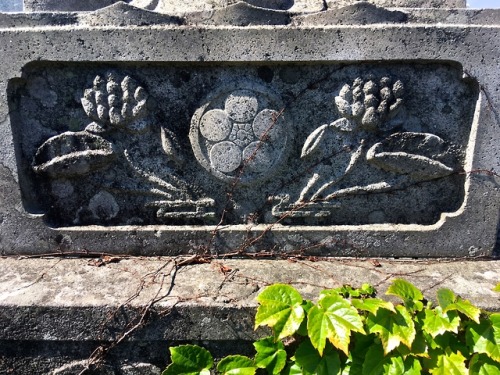 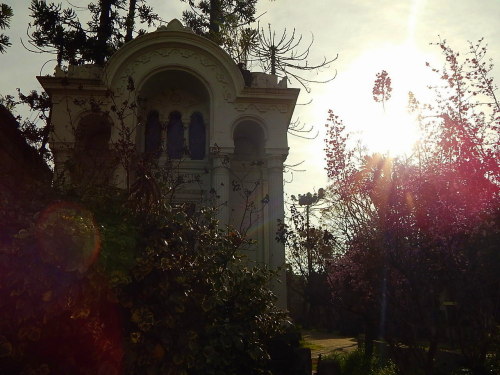 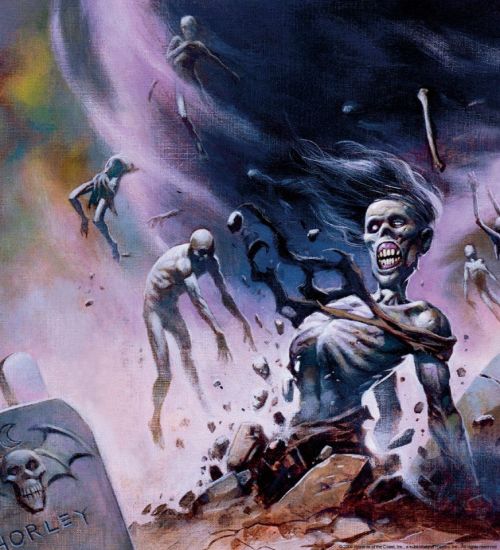