I can’t believe I never posted these dhehdjdbd

Cyprine and Microcline, based on the pokemon Toxicroak and Lurantis respectively

The first two are designs of a princely Rapidash named Augustus, nicknamed August.

The third pic is him with Bellisima, who’s bullied at a competition because she’s a thrash baby that just wants to perform.

Third and Fourth pics are Bellisima in performance attire! She dances ♡♡

Fifth pic is probs a meet-cute of the two, wherein Bellisima fell on top of him,, very cliche I know,,

Last pics are just character design practices!! We have Suicune, Munna, and Toxicroak!! ((Although I think Ive seen Suicune’s design somewhere?? @ me if you recognize where I think I got inspired please,, (Ｔ▽Ｔ) ))

not the best but here he is

#pokemon, #oc, #toxicroak, #request, #nomie
3 notes · See All
ask-pokemonranger-raiAnswer
Wait you guys had to rescue you people from an army of croagung when exactly did this happen?

Oh it wasn’t too bad.

In my early days of being a ranger, like 3 years ago, the Great Marsh was a bit of a wild area in itself.

Some trainers liked the challenge but others weren’t as fortunate in the field.

The Masrsh was our first big challenge to take on, as some pokemon became more territorial and aggressive.

Croagunk thrive in that environment so it was natural for them to have large numbers at the time.

One of them evolved very quickly and became a Toxicroak, and unfortunately had a bad attitude as well.

It lead the others like a boss, and took down opponents left and right.

Theres nothing wrong with a strong pokemon, however when its causing troubles for other people or pokemon, then we have a problem.

A young trainer had his whole team defeated by the gang of Croagunk, but Toxicroak didnt seem satisfied.

Luckily we were working in that area and managed to step in.

They were getting too aggressive and we realized we had to take the leader out of the Marsh.

We managed to capture it and we brought it to an isolated holding area so we could try and communicate with it, however it just seemed to want to battle.

Due to its typing, we contacted the Fighting Type Gym Leader Maylene and asked her for advice.

She actually offered to take it in as a training partner to help her team in resistance for Poison types.

It’s also a good way for it to get some aggression out.

Last I heard, it has managed to calm down and they parted ways, its aparently just wandering, looking for a nice challenge but it’s completely non aggressive.

Aparently it also returns every so often to challenge Maylene.

Toxicroak-EX Poisoned things. It existed just for that, using a more powerful form of the effect at that. There were formats where such a thing would have been the focus of a star deck. The one Toxicroak-EX landed in was a mixed bag. It had Virbank City Gym to work with as well as Dragalge to help lock things in play. It also had to deal with a format filled with powerful attackers and, at least while late BW-era cards were legal, Virizion-EX blocking Special Conditions. What would win out in the end was anyone’s guess.

Toxicroak-EX had a typical 170 HP. The Psychic Weakness gave some help to Mewtwo-EX or Trevenant depending on format, though it could have been much worse. Being able to retreat for a single Energy was also rather nice.

Triple Poison was what made Toxicroak-EX different from other Pokemon. For a Double Colorless Energy you Poisoned the opponent’s Active Pokemon. 3 damage counters were put on that Pokemon instead of 1 between turns. This could add up really quickly, especially if you had Dragalge from the same Flashfire set in the back to prevent easy switching. Some things did mess this up, like Switch, Garbodor, and Virizion-EX, and it was a pretty slow process without something like Item lock, but when it stuck it was effective.

Smash Uppercut was just a little weaker than would be desired. 80 damage for 2 Psychic and a Colorless Energy was low enough that you needed a boost to take out another Pokemon-EX in 2 turns. There were plenty of options for a straightforward attack that you’d want to pick before Toxicroak.

Toxicroak-EX was a Pokemon that needed one more thing to be great. If it could pair with any sort of Item lock while setting Poison it would have seen a lot more use for sure. As it was, you’d probably want to stick with Seismitoad-EX’s Quaking Punch with Hypnotoxic Laser backing it up, at least in the BCR-On format. XY-On didn’t have Hypnotoxic Laser but also lacked Virbank City Gym which helped Toxicroak-EX itself. This was a really cool concept Pokemon that just needed one more push than it got. 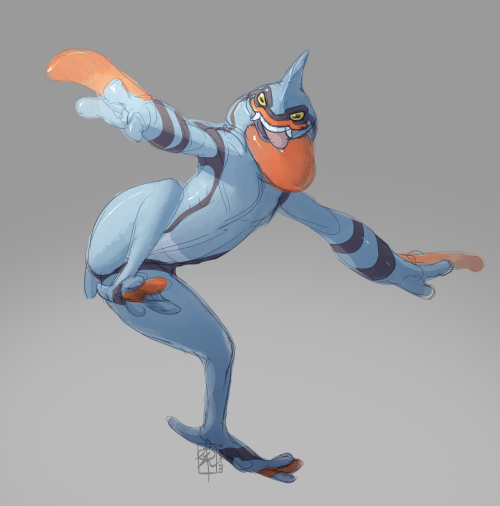 #toxicroak, #pokemon, #pokemonfanart, #realistic pokemon, #fanart, #i had to redraw the legs so many times to get them right hrngh it was a whole ordeal, #:')
38 notes · See All
atwistedtaurusText

Yesterday was Pokémon day so I had to draw me and a few of my faves.

Her name is melanie

Their name is Zap and these are their shiny Pokémon!

They’re also a great cook, we made sweet apple curry together!

totally forgot to upload this ko-fi donation from last week! It’s @yark-wark’s character!! Such fun to draw <3 thanks again for the dono! “Hm hard …. I don’t know as many pokemon as some would think. But I guess Toxicroak ”

“ With this fucking team and with my fucking feral froggy bitch leading them, I can even beat Pokemon Trainer Red. “ - Galactic Energy Boss Saturn, Former Lt. Commander of Team Galactic.

#🪐; OOC, #🪐; Pkmn Team, #🪐; Headcanons, #( this is saturn's team from the Diamond and Pearl Adventure! manga ), #( just added some appropriate names to them cuz their trainer is a nerd lol ), #( Toxicroak had that name ever since she was just a Croagunk. ), #( the others? Their names were only recently given to them by Saturn. ), #( it's for him to be more attached with his team... so he decided to name them. ), #( and. uh well. he heard a grunt call their Glameow by a cute nickname OwO ), #( will update this later- 'bout to pass out sadfnsapodf )
5 notes · See All
feypactText

#emmybody talks, #just bc i feel like im gonna get curbstomped, #toxicroak golbat wormadam wigglytuff.. maybe bibarel and dunsparce?, #its toxic cup so you can only use poison+ground+bug+normal+grass types, #and a few mons r not allowed for being too op like swampert and vigoroth
2 notes · See All
ringedgiantText

When Saturn recently saw a person and a Croagunk having a lovely nap together.

Reminds him of a much more… simpler time.

#🪐; IC, #🪐; Dash Comm., #slowgunk, #rallytheskulls, #( saturn vc: i remember when toxicroak's not feral af and was just a baby *cries* )
5 notes · See All
ringedgiantAnswer
(Kreacher) *Stares at the Toxicroak with extremely vile intent, you hurt his sibling......*

Hatched a shiny Croagunk today! Her name is Porcelain after the porcelain berry! 🤗

His name is Hastur because a friend of mine watches Good Omens and apparently that character is associated with frogs or toads.

My next Masuda Method hunt is gonna be Hawlucha!