A/n: The actual story is under the cut because of spoilers. Sorry the reader is always female, it’s really difficult to write gender neutral or male readers for me. I’m female, so that may contribute to my struggle. I tried really hard on this one, but it only took me 3 hours, so it’s probably not the greatest.

Rated: Teen and Up Audiences

Summary: Ray tensed up with almost every sentence, folding the petal in his hands nervously. “So I’m gonna die?”

“Only if you don’t confess to whoever this one-sided affection is for or get surgery for it, although surgery is said to remove said affections.”

“If it’s one-sided already from the description, why would I do something as stupid as confess?”

“There are rare cases where the feelings grow mutual and the buds disappear.” He nodded, gray eyes a bit emptier than before.

“The Stars always feared The Night wouldn’t need them anymore when the Full Moon arise, shining as brightly as they did. Little did The Stars know The Night loved so, so much more.” 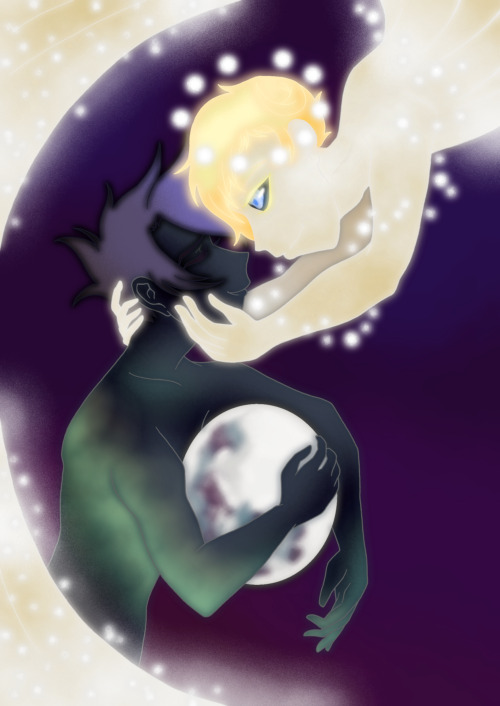 WIPs that I probably won’t finish.

Midnight is when Norman can breathe. He can breathe during the day, of course he can, but he has to breathe through a thick facade, made by kind smiles which he most often than not doesn’t feel and kind words he doesn’t mean. During the day Norman breathes through a facade. And that’s fine.

Before he didn’t need the facade as much, but he had support. Back then he had the support of a blob of flame red hair and emerald eyes. That support is there no more, replaced by a cold gravestone with gold letters. Nothing more.

He can breathe without a facade at night though. He has black hair to thank for that. So he walks up the mountain, pace a bit faster, not minding the small rocks bouncing against his feet, nor the dirt messing up the white shoes. All that mattered was that he made it there by midnight.

He doesn’t quite pay attention to the tall trees like he used to, he has another captivating green to look out for now, nor does he see the fallen autumn leaves. He doesn’t see where he steps much either, leading in him almost slipping. He was such a fool.

He does make it there by midnight and Ray is there, waiting for him.

When you are watching a ready as I’ll ever be animatic for the promised neverland and it’s Ray taking the place of Varian and you are like….but..why ? why not that other character who, by the middle of end of the manga, is way more suited for Varian ? really subtle here…

…and then you realise it’s because the animator did it for anime only….and everything make sense once again. 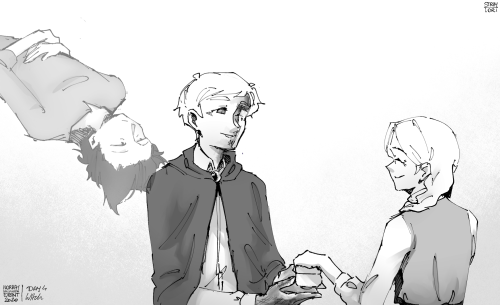 The Promised Neverland X Atelier of Witch Hat! Reading and loving both series made me realize Norman and Quiffrey as well as Ray and Orugio resemble each other not only physically, but also in character! 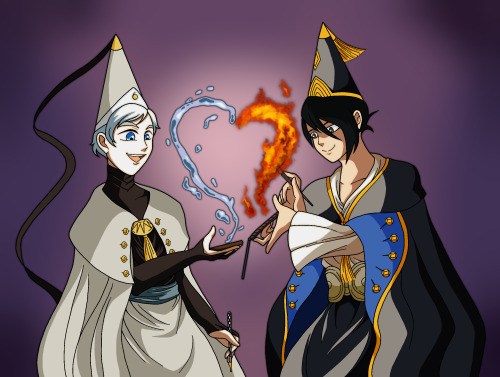 “Just like you, I want my brother to find an exemplary wife to have and to hold. That’s why I’m going to help you out on your little mission, Emma.”

What? He was going to help me find Norman’s wife?

“Really? You’re willing to help me? But I already have my best bet.”

“The pretty blonde that saved your life! Anna!” I pointed at Anna’s position, where she was laughing comfortably with Violet and Jemima.

I might’ve been imagining it, but the side of his lips twitched, and his eyebrows were knitted downwards. “Lady Anna, huh?”

Thanks to Unsplash and to @redhairedhunter for this little promotion.

Read it on AO3: Chapter Eighteen 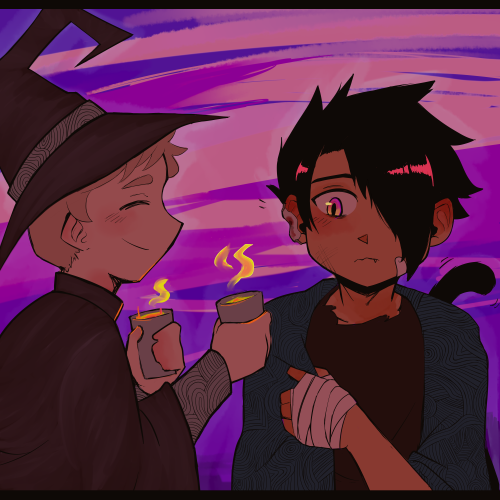 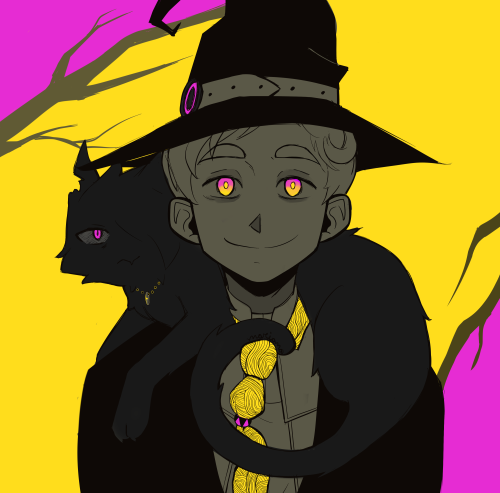 He knows what it is of course, having one himself, a shadow, in a sense, ever so dark, ever so threatening, always there. He’s used to it by now, the frail body, the crystaled eyes, the graying hair. He would be a healthy baby, that’s what the doctors had said no?

Yet a magician, perhaps an oracle, heard a prophecy. Such a damned prophecy it was the one that ruined his life, a second after his first breath. It’s all because of another magician with white

hair - the irony- that Norman even has to die.

He cannot live, for a curse is cast upon him. He knew this since three, his parents had been honest at the very least. It was meaningless, making ties, when they’d only be cut by obsidian scissors today, if he was being optimistic, tomorrow.

How could he not love Ray when he had seen the boy’s tender and caring side, which Norman couldn’t help but love?

He was cruel, Norman knew, to himself, the others as well. He was like a dark curse upon others’ life, and much like his own curse, he’d leave the others destroyed. He was devil himself, evil, cruel, yet had the smile of an angel. How ironic.

“Yes, the home-work essay is for curses, why?” Ray asks 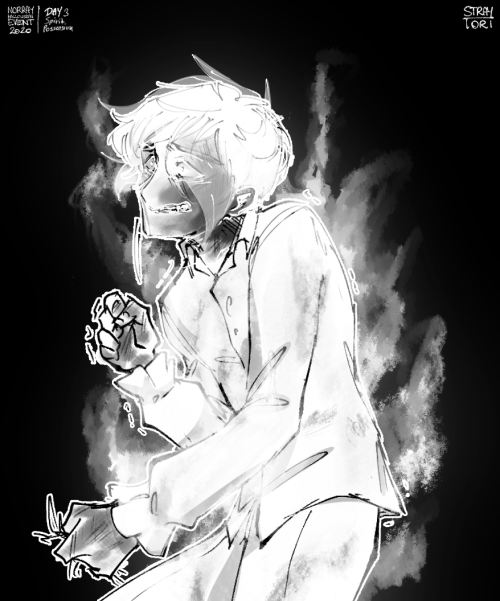 “I remember everything everything, and each life within me I relive once more”

I gonna pity poor baby Ray forever, remembering all those horrible things he had to face and not be able to understand any of them. No wonder this boy got no serotonin into his not so tasty brain 😥 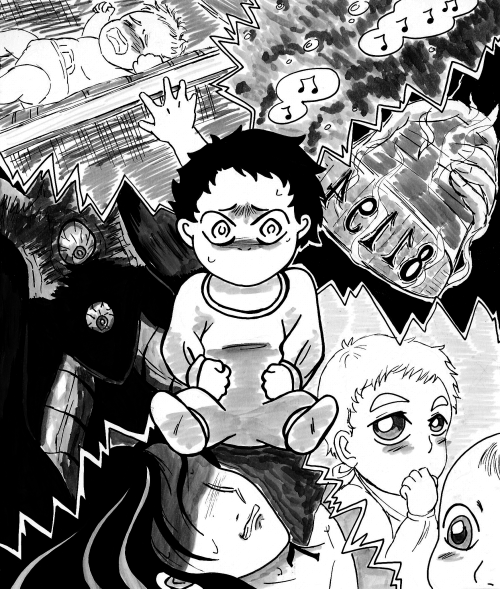 It starts out innocent enough. Emma suggests they go to a haunted house for halloween to get in the mood, which he agrees because why not. He could never say no to her anyways, being his best friend since five (and a matchmaker but that was more of Emma being Emma)

So they go, him dressed in a white suit with scarlet fake wounds painting his suit. Emma goes as a werewolf which, fine, she can’t look like any monster, she’s just too pure.

Ray dresses of course, as a vampire. Vampires were supposed to have unearthly beauty, which Ray just pulls off amazingly, as handsome as he is. It makes Norman almost flush, seeing him in that black and red cape, raven hair contrasting his pale features. It makes Norman want to kiss him. He resists through.

Emma has a sudden problem with Gilda to take care of, but they’re already in line, so she makes them go alone. Norman thinks that there’s definitely something suspicious about that, but oh well, he might as well enjoy the alone time.

He and Ray finally go in, both wearing unimpressed looks, far too old to be scared by such things as haunted houses. The first attractions are childish really, he and Ray almost smile at how cheap the costumes look.

Ten minutes later, though the atmosphere starts getting colder. It may be the work of an air conditioner, the smart part of his brain supplies. He might be a tad more scared, but he’s still sane.

Fifteen minutes later the bones look far too real. He takes Ray’s hand in his, it’s warm, unlike a vampire’s would be. Ray would usually just refuse, not being one for public affection, but it seemed the house was affecting him too.

Twenty minutes later and Norman is gripping Ray’s hand tightly, just as the latter was doing with his. They’re ready to jump at every goddamn noise, the house really had overdone it that year.

Finally they see the end of it, and they’re almost, almost there.

Emma jumps behind them shouting a boo.

Norman and Ray, both seventeen years old, renowned geniuses,  scream so loud that probably their entire city, no country, had heard, hugging each other tightly in the process.

“Scared ya,” is all Emma can say before Ray chases her down the hunted house’s walls, while Norman clutches his heart.

I don’t like kids (Don’t bother me about it) but if Norman, Ray and Emma were real I would love be their mom (Obviously without the farm assassins context lol) 🥺🥺🥺🥺

I JUST WANT TO SEE THEM SMILING AND HAVING NORMAL LIVES