While i agree with the turtles, maybe dont kill people????? Please???

Characters that I can’t see as anything but Transgender:

Also I have seen some stuff about Neo from the Matrix? I never was much for the Matrix as a kid or even now, but I mean maybe.

Anyways that’s all I got, I just wanted to get my thoughts out there. I’m cis myself, but if anyone who follows me is Trans then I support you, here’s a heart for you ❤️

Are you in class today? You’re probably not american my b

I agree, just steal their kneecaps. No straights allowed

trans Peter Parker is a headcanon that I will die on

I always ask for asks and then never expect to really get them?? Thank you so much ❤️

My favorite headcanon right now is Trans Fox Mulder (The X-Files). It just makes so much sense! It also super boosts my self esteem.

My favorite headcanon of all time is probably either “Every Spider-Person is Trans” or “Jaime Lannister isn’t actually dead and is living in Tarth by the name of Lance Jannister with Brienne”. I originally made the post as a joke but it got so much support that I’ve started headcanoning it for real now akrhwndijeja

So this is happening in the new timeline created in the Time Heist, I think. Basically Tony found him (or vice versus) after he ran with the Space Stone and they cleared his name and started work on an actual plan against the possible invasion of the Mad Titan. Also, I blatantly stealing from the comic runs here and making Loki genderfluid. And that is Peter Parker.

…it ended up being a bit longer than a drabble.

Loki watched as Tony dropped a full-sized candy bar into the bag of the tiny pirate in front of them. They were in the lobby of Stark Tower and right beside the bank of elevators that led to the upper levels. The line of children, teens, and even adults stretched out around the edges of the expansive space and then out of the front door. The whole affair was very boring, not only because Tony had asked so very nicely that Loki not trick anyone, regardless of possible interpretations of the declaration that each child made.

“Trick or treat!” declared another child. Loki looked up, only mildly curious about what this one would be dressed as. There had certainly been a variety. Loki had lost count of how many Captain Americas, Thors, and Hulks there had been. Any time there was an Iron Man, Loki slipped them an extra candy bar.

The child in front of them now was none of those, nor was the child any of the other costumes that Loki had seen that night. Instead, the tween wore a poor reproduction of an even more familiar armor. The helmet faithfully recreated out of a colander and aluminum foil sat crookedly over brown curls and one of the curved ram’s horns looked like it had been partially crushed. The green and black of the would-be armor did not go with the boy’s complexion, which would have been better suited for reds or maybe a dark blue.

“He didn’t mean to offend,” the child’s guardian said after Loki had done nothing but stare for a moment too long. She laid a hand on the child’s shoulder, attempting to tug him closer to her. “He was going to go as Iron Man, but last month, after that gala–”

Loki knew what she was referring to. Loki had attended a fundraiser for the Maria Stark Foundation with Tony. The press had been full of articles about the gown that Loki had worn, and not all of them had been favorable. Midgard was even stranger than Asgard in that regard. Loki shifted onto his knees before the child.

“What would you like to be called, little one?” he asked in the same gentle tone he used to soothe Tony after a nightmare or panic attack. The child’s brown eyes widened dramatically as his eyes darted towards his guardian before returning to Loki’s face. He swallowed hard before squaring his shoulders and answering.

“I’m Peter,” he declared with a great deal of bravado injected into the name. Loki smiled, his own gaze darting towards his lover before returning to the boy before him.

“Would you like a trick, Peter?” Loki waited until the boy nodded before waving his hands over the boy’s costume, transforming the materials to match his actual armor. The boy turned himself in a circle attempting to see it. “It only last a few hours, so don’t go rushing into battle.”

“Thank you!” Peter cried before launching himself at Loki. Despite how wiry the boy’s arms were, they managed to squeeze a grunt out of the god. “You’re the best! I mean, after Mr. Stark, of course!”

And if he slipped an extra handful of candy bars into the boy’s bag to go with Tony’s two, then, well, no one said anything about it.

Pepper didn’t like the giant bunny, but little!Peter LOVED the giant teddy. 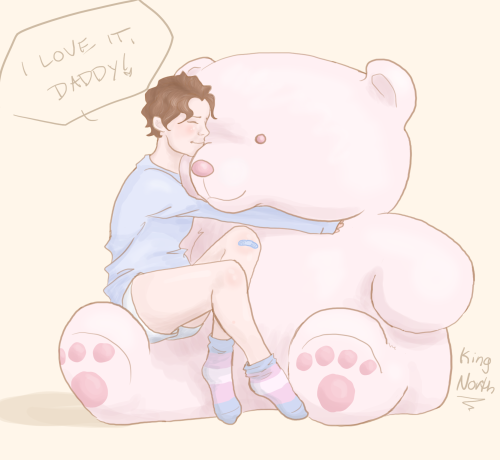 This has probably already been posted but whatever

#i headcanon that peter is trans, #and good for him, #trans peter parker, #marvel
466 notes · See All
camilapaz17Text

And yes my peter is trans💙

i forgot to post this but spiderman at pride 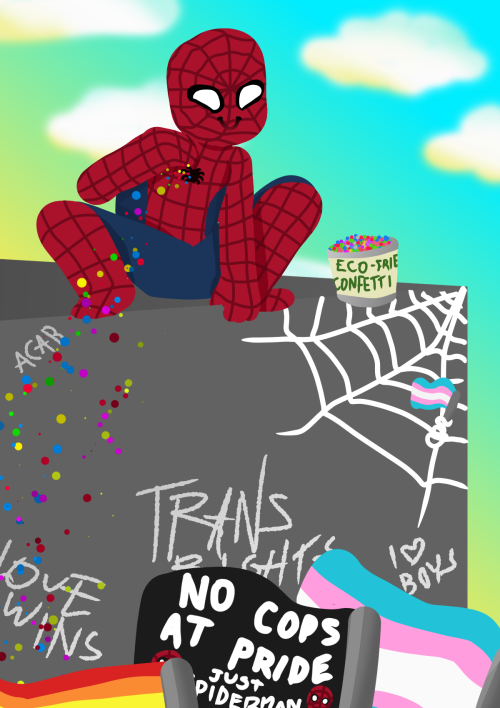 Look Up at the Stars by earnestdesire

Check out the new chapter on ao3. We’re in Steve’s perspective! And we get to meet Bucky! And there’s a dog! And we earn our Explicit rating (for the first of many times, I’m sure)!

#mine, #fanfiction, #fandom critical, #not really but for any1 who wants to filter, #yes i am thinking about trans peter parker fics here but applies to a lot more
1 notes · See All
king-ofconfusionText

so i wrote a thing

read it maybe? if you want?

#spiderman, #peter parker, #autistic!peter parker, #trans!peter parker, #its very much me projecting, #like, #i am peter, #peter is i, #its gonna have irondad later, #but like, #its only part one, #im gonna regret posting this in five minuetes buts, #here, #take it
2 notes · See All
Next Page