Everyone should watch this

Pink News reports on the speech of the lesbian British peer, Baroness Parker, in defense of an inclusive Maternity Bill. She used the opportunity to tell her peer’s the truth about transphobia.

A Labour politician, Lord Hunt, has used the House of Lords to rage against the trans-inclusive language found in the proposal.

Parker is a Liberal Democrat.

According to Pink New the baroness said this in the House of Lords (the upper chamber of parliament):

“The classic campaign identifies a minority group, preferably one about which the majority population knows little, ascribes to them characteristics and motivations which make them a threat, repeats those assertions, preferably with the backing of a neutral body of experts, over and over until they become received wisdom. It’s what happened to migrant communities in the UK in the 1970s, and in the 1980s it was lesbians and gay men. Today, it’s the turn of trans people.“

“They [the alt-right] support campaign groups and individual academics to produce those documents which look like research, but under closer inspection, they’re just the same dodgy dossiers as in the past.”

“If you closely examine [Lord Hunt’s] speech, there is no actual evidence of any threat by trans people to individual women or women’s rights. It’s just an opinion, admittedly widely repeated”

"As a woman who lived through Section 28 [Margaret Thatcher’s homophobic legislation], I know what it’s like to be portrayed as a member of a group that constitutes a threat to women and children and families.”

“[It was] unsafe to let us [lesbians] into changing rooms because we pose a threat – all without evidence. That was an expression of classic homophobia, often expressed in the exact same arguments and phrases we’re hearing today. The effect of what you’re proposing is the same.”

Baroness Barker also talked about “gender-critical” trans-exclusionary feminists who are now supporting Hunt’s anti-trans amendment. She ridiculed their refrain of being “silenced” by the media, which is repeated by that same media “week in, week out”.

“They’re not being silenced, it’s just that some of us have the temerity to disagree with them, and to call them out for what they’re doing.”

The US Equality Act is to outlaw discrimination against LGBTQ people in housing, credit, jury service, public accommodations, and federal funding.

The House of Representatives passed the legislation yesterday, but it is unlikely that the Senate will follow up, given the Republican Party’s increasing hostility to queer people. They are currently weaponizing transphobia in an attempt at mobilizing their base.

In the Senate the bill will require at least 10 Republicans to vote with all Democrats to advance past the so-called filibuster.

Metro Weekly has listed the representatives that voted against the law in the House.

All Democrats voted for the legislation, as did three Republicans.

For the right-wing, all trans rights issues are about opening up another front in the culture war, because that fires up their base. It’s at this point a well-worn playbook. Every claim they make, every slippery slope they predict, is wrong. Not just morally. Factually wrong.

Every dour prediction is provably false, as can be seen the handful of areas where trans rights have actually been expanded. All the concerns about bathrooms, women’s sports, whatever. It’s no more true than predictions that legalizing gay marriage would lead to bestiality.

If you repeat this shit it’s because you’re ignorant or just trying cloak your bigotry in the cheap drapery of a moral crusade. It works because it strikes right where a lot of people have little knowledge and high discomfort. Actively feeding it makes you cruel or a dupe.

We have all played this game before. People will try to make their bigotry seem like a reasonable set of concerns, try to rope in how it’s somehow about protecting children, create more outrageous bogeymen in their growing desperation if they lose ground.

But it always starts with someone “just asking questions,” just trying to understand why things are different now than they used to be, as if that’s ever a surprise. But the question they never ask is “is society punishing someone just for existing?”

Because the only answer they’d ever consider reasonable to that is to tell the person they don’t actually exist.]

can’t believe she said this 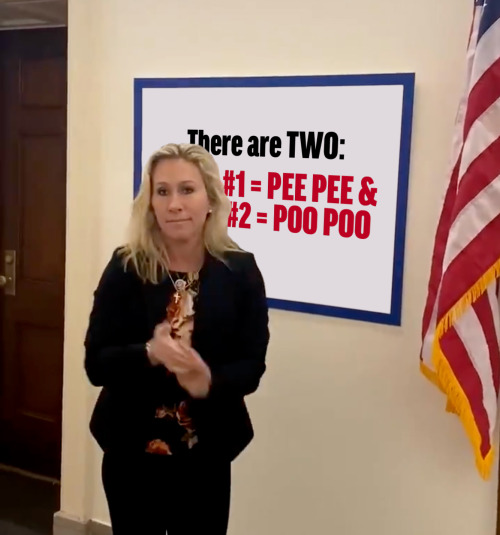 #ISK HOW TO TAG THIS#homophobia#transphobia#KIKD OF? JUST IN CASE#what is HAPPENIGN#coby talks#this is surreal. new level. papa johns and chips ahoy stepping up their game /j
5 notes
fourgetregret
Text

idk how to explain this but…shit like replacing mr potato head with a non-gendered potato doesn’t even feel like a good-faith attempt to actually represent or reach transness and trans people? like it literally feels like bait for fox news pundits. it feels like using transness as a rhetorical point. because these types of things enrage transphobes and give transphobes another thing to weaponize against us (“you’re trying to cancel mr potato head for being a man now”) when no trans people asked for this and it in no way actually supports or affirms trans people

#hasbro rebrands mr potato head as gender-neutral#rye.txt#like it almost feels like they're making fun of trans/nonbinary people#like when i read i thought it was a babylon bee headline#idk#transphobia#(kinda?)
1 notes
david-box
Text

Why are terfs/radfems like “Our feminism is so much more radical and critical of the patriarchy than generic liberal feminism” and then their feminism is like 2 good ideas, one of them actually counterculture, and the rest is just *bad science from the 70s* *homophobia but woke* *historic revisionism* *trans women as pedophilic threats but woke* *women as inherently pure until ruined but woke* *something your mom would say about bisexuals* *something about trans people that’s arguably more stupid or cruel than what your grandad would say* *literally just cyberbullying but ideologically approved* *more bad science* and nothing about race or culture unless it’s the vague implication that trans people can’t comparing cus women exist in MENA countries

Are leftists really transphobic? How can any socialist/communist be a transphobe?

Sigh, I don’t know what to do about this country.

I saw earlier a new bill or whatever regarding pregnancy/birth leave for MPs, and it was originally written to say ‘person’ but was apparently successfully lobbied to specify 'mother’ instead. Why. Why do you have to be so incredibly fucking specific instead of inclusive of situations that would include mother anyway. Apparently there was a strength of feeling from the public on the matter - I’m willing to bet from a prominent TERF and their following.

I also finally read the response from my MP on the toilets matter and he’s a very slick inoffensive politician (a Conservative, naturally) and said about hearing diverse views etc, etc. But I fear it’s rule of majority and the number of self-obsessed transphobic assholes will outnumber the number of trans people.

And the thing is that I reckon trans-positive people would outnumber the trans-negative if you organised all those out of the loop on these matters and politically disinterested (because why not be inclusive?), but those who are in the loop are trans people, strong supporters of trans people, and haters of trans people, and the latter seems more numerous than the first two 😞 Majorities shouldn’t be able to just oppress minorities and keep them from their rights.

Parent: My child isn’t trans - they didn’t show any signs when they were young!

Me: Have you heard of an advanced technique called lying

Transgirl here. This gonna be a long one btw, imma include the Tl;Dr in basically the next sentence, but it’ll be in the tags in a bit of a better more explanation, so thanks ahead for reading.

Some of y'all don’t know the difference between terfs and transphobes and it’s fucking STUPID.

Someone is not a terf if they just pull-up with like “transwomen aren’t woman because there men” IS JUST TRANSPHOBIC?! it’s not terfish to say, it’s STRAIGHT UP transphobic? Most people outside of heavy internet users don’t know what the FUCK a terf is. but they sure as hell know what transphobia is. A terf is, BY FUCKING NAME, a trans exclusionary radical feminist. And the problem is, when you use terf you’re minimizing the conversation about them. Transphobia and terf bullshit are different breeds of the same shit. The main problem with terfs isn’t that there transphobic (which they are, and is still an issue) the problem is there transphobic “feminists” which brings up some more issues. Firstly, they have a transmisogynist view of feminism. Because most transphobic people are just like “hate those [REDACTED SLUR] there gross” and that’s like. The end of it. but terfs decided to go a step further and try to come up with reasons why. Instead of it simply being “hate those freaks” it’s “I’m protecting the cis woman from getting [ 4 LETTER R WORD REDACTED] in the bathrooms. Also transguys PWEASE come back queenies, your just confused” (but, on god, I have never seen this shit before, like besides people calling it out?? That’s a different post, different conversation y'all ain’t ready for)

Think of it like this a terf is constantly on offense, trying to justify there shit and deflecting, which means you have to actively fight back against there bullshit. They are ACTIVELY trying to fuck over transwomen and trying to repeal our hard earned rights, with very clear intent. Transphobes, on the other hand, are on defense. They’re actively trying to keep us on the same level we are right now. They know it’s basically futile to try to go back, so they just impede forward progress.

So, here’s the issue. Terfs are co-opting a good, necessary, movement. Feminism is something we still very much need, and terfs are ruining it’s image. I think some of the people who just call any and all transphobes terfs are either passively or actively doing it because they hate feminism, and that’s a problem. Most of the time, what these people are saying has NOTHING to do with feminism. Terfs present more issues that JUST being transphobic too btw. They also hate woman expressing them in a way that is common, but still can feel liberating, or even just preferred, like shaving your body hair and doing makeup. They want to like, force everyone into being reverse trad wife’s. We need liberation through confidence and rep, not simply spite and reversing roles. We don’t need to simply dodge the problem, we need to break them down and rise above them.

ALSO terfs usually LOVE the fact that there terfs, they wear that shit like a badge of honor. It’s a lot harder to love being called a transphobe, and I don’t want these bitches to have an OUNCE of breathing room. Once theyre comfortable, they’ll fight to keep that comfort, and if we can get rid of it, they’ll slowly die out.

I don’t know, maybe I’m wigging out too hard, but I’m tired of people not knowing what shit means, and I’m REALLY tired of feminism being demonized in a different way every like 2 years. It started with people saying femi**i, then it was the red hair girl, then it was gamergate. Im fucking tired of it. Feminism doesn’t just impact female liberation, it also helps combat racism that is specific to different racial groups, THATS WHY THERES A WORD FOR RACISM SPECIFICALLY AGAINST BLACK WOMAN, and it’s misogynoir btw.

In conclusion, not all transphobic people are terfs, but all terfs are transphobic

transphobes cant find any real issues caused by trans people so they have to make up issues and blame them on trans people.