gansey: “no one cares about me”

adam, pointing at himself: “are you sure?”

adam, pointing at ronan, noah, henry, and blue: “ARE YOU SURE??”

Summary: Gansey can’t stop thinking about Ronan tickling him to pieces on the couch and tries to seek the other out for a repeat of that day. Ronan is happy to oblige so long as he hears a certain confession from the other boy.

Gansey had been trying all week to get Ronan to tickle him, and the fifth time it happened Ronan finally caught on to what was happening.

After that first and second time on the couch, Ronan had left the other boy relatively alone. There were a couple moments when Ronan would jab him in the ribs, or that teasing smirk would play once again at his lips, moments where Gansey suspected he would pounce. Each time nothing happened. It was almost annoying as Gansey had been on edge ever since that day, waiting for Ronan to take advantage of his newfound information. As days and then weeks went by, however, Gansey began to accept that maybe he had forgotten. Or worse—maybe he was weirded out by the whole thing and was avoiding him on purpose. The thought was mortifying and Gansey tried to push it from his mind, though anxiety kept it there at the edges of his consciousness, needling away at him endlessly.

After a while of this strange radio silence from Ronan, Gansey decided to take matters into his own hands. The first time he had provoked Ronan into retaliation he had been acting like a dick; maybe it would work a second time.

“To feel awake when my eyes are open.”

thanks to everyone who took the quiz and especially to those who left messages theyre very entertaining to read through ;p

The thing with being the one leftover, the not-favorite of three siblings is one might end up thinking things in the range of “hey its no biggie.it’s only human to have favourites and it’s not like they can control it”

to “i will do my own things. I will stand on my own and be my own person. I don’t need their validations”

And it swings and swings back and forth like a pendulum.

My ronsey trash ass re-reading that one scene in the dollar store over and over again: Art.

somebody: niall lynch is a loveable asshole

me: he neglected his children and put his family in considerable danger

me: I do see ur point tho

#niall lynch#trc#i hate him so much but like do i want him to be my dad?? not really?#idk
0 notes
headlightspirits
Photo

you ever draw something and go ‘hey i wanna look like that’. yeah. 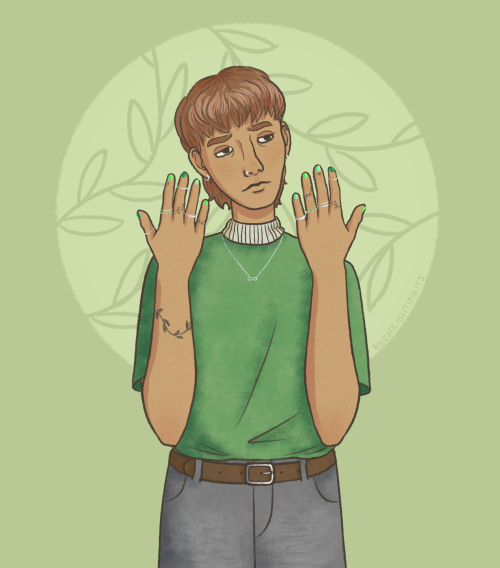 I was asked to list some Soulmate Pynch fics that I liked. So here they are, in no particular order.

The first time Ronan found a soul mark, he was eight years old. When he lifted off his shirt to climb into the bath one afternoon, there was a blotchy, purple bruise on his stomach.

or: the soulmate AU where whatever marking your soulmate gets, it appears on your own skin for 24 hours

Welcome to Starbucks. Can I take your order, Ma’am?

What the fuck, right? Ronan didn’t even like coffee. And in what situation is Ronan going to be mistaken for a ma’am?

That’s why he avoided cafe’s, as a rule.

Pynch Prompt Week 2019, Day 1: Soulmate AU - Based on the quote, “Eventually soulmates meet, for they have the same hiding place.”

💞 we tell no one by @bestillmyslashyheart​​ (Rated T)

Blue and Ronan have the same taste in guys. They refuse to admit it.

“Aren’t you ever curious?” Gansey asked, voice hushed as he stood beside Adam in the bathroom at Monmouth.

Adam had come straight from work to Monmouth because Gansey wanted to go trekking around a new hiking track he’d discovered, and he’d gone to change in the bathroom. Gansey had come in to get a juice because apparently in this house there is no privacy. Ronan and Noah were out joyriding somewhere - if they had been here, Adam would have been more careful. As it was, Gansey had come in and gotten an eye full of the ink of Adam’s arms. Ronan had gone all out. He had tugged his shirt on quickly, but not quick enough.

EtoileGarden has written other Pynch Soulmate AUs, though I haven’t read them all.

“When Ronan was ten, he ran into his soulmate. Literally …  But before he could say anything, his soulmate hurriedly stood and fled in the opposite direction.”

“That’s nice, Gansey,” Adam says, though for all he knows it could look like Microsoft Word clipart. He’s not Gansey’s soulmate, so he can’t see Gansey’s soulmark.

an AU loosely based off the concept of the book Unspoken by Sarah Rees Brennan. or, an excuse for Ronan and Adam to have a heart-wrenching psychic bond.

“I don’t know,” Ronan, a child, wasn’t all that concerned with such trivial logistics. “I just am.”

(This isn’t labelled a Soulmate AU, but it checks all the boxes. It’s complete now but, full disclosure, I haven’t yet read the last two chapters)

Ronan is a Grammy award-winning rock star with a shady reputation, Adam is a mechanic with a maybe-girlfriend. When Blue drags him to the Second Sleeper concert, he gets wrapped up in a scandal with himself and Ronan at the center.

Just for the record, Adam didn’t want to be there in the first place. He was already half deaf, and the last thing he needed was to lose the other half in the mosh pit of a rock concert. He didn’t even like rock concerts.
Unfortunately for him, he did like Blue.

Ronan finds out the hard way what a complicated thing it is to be Adam Parrish.

It wasn’t that Adam listened to the comments from other Aglionby boys about “the brain and the brawn” or took any of their gold-plated opinions into account.

It was the fearless, almost insubordinate, nature of Ronan’s rolled up sleeves. Two handprints encircled his wrists, a deep violet, darker than any mark Adam had ever seen. Gansey sported a matching color on both palms, as if he’d dipped them completely in paint.

Feel free to add your recs, so it can be a more complete list for the Anon who requested this  💞

oh i just know the gangsey listen to sea shanties

#this was gonna just be about gansey but honestly the all would#they have excellent taste#trc#the raven cycle#gangsey#tallie.txt
10 notes
forestward
Text

gansey’s parents r so weird. their entire family is so cracked abt history that they were just like “OK makes sense” at their 10-15 YEAR OLD CHILD just fucking around in europe. what the fuck. karen he died like last year SEND HIM TO THERAPY INSTEAD

holiest by glass animals is a pynch song

just finished rereading the dream thieves so here’s the rest of the screenshots:

Literally Ronan and Adam at the barns 🤠