every day above ground is a good day

Abbacchio: Fugo, you of all people should understand. Duty means doing the things your heart may well regret

Trish: did you just quote Barbie as the Princess and the Pauper?

feel like i haven’t properly drawn jojo in a while 💌

Another addition to my jojo’s mermaid series, Trish and Mer-nareff. I was going to do sea turtle coco jumbo, but my hands are sore and I need to look at homework, so that will come later.

I firmly believe that these two are like siblings and get along amazingly, they are a set do not separate.

I struggled a lot with making Polnareff look the part of built like a brick shithouse, but still compromising with five-nareff’s design. (also I refuse to ignore that they just… forgot he was supposed to be missing two of his left fingers when he showed up in part 5????) His hair is ridiculous and I hate drawing hair. This is why Mista is my favorite. Trying to adapt the prosthetic legs into a tail was interesting as well, I tried to have it look mechanical without being over-complicated.

Trish is surprisingly fun to draw, all things considered, I was surprised.

Anyways, two art posts is enough for the month, back to your regularly scheduled writing. 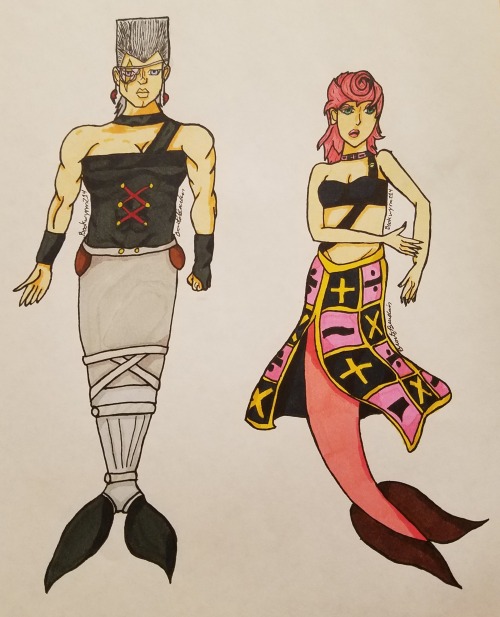 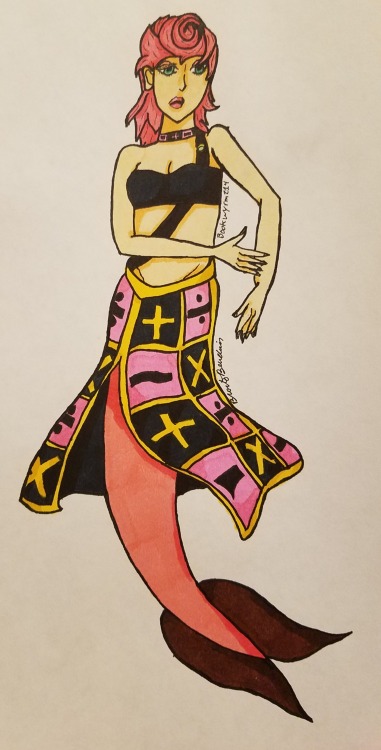 The one thing that really doesnt make sense in golden wind is Diavolo having a daughter. I mean a child. What the fuck happened?? I thought the boss was the absolute epitome of paranoïa and schizophrenia, that keeping his identity secret was the only thing he cared about, but somehow he banged a woman, at some point in his life? If he haden’t done that he would have won against everyone else…

Yes I was rooting for Diavolo the whole time.

Just imagining how great dates with gang-stars would be 🥺💭❤️

Modern vento aureo au where Mista tells Trish her father is trying to murder her because he “can’t stand to see a girlboss winning”. Abbacchio pushes him out of the boat.

#it’s 2:40 am and I have class tomorrow#but the idea would not stop tormenting me until it was written down#narancia asks if mista thinks he’s also a girlboss#either answer gets him shot by aerosmith#jjba 5#guido mista#trish una
11 notes
mrsghirga
Text

It’s late but I thought of a super cute idea so enjoy and thanks for reading!

You and Narancia were quietly laying on the bed in his room. Your head gently resting on his stomach while the both of you were looking up towards the ceiling. He had told you he had this new mixtape he wanted to show you, and you gladly accepted his invite to come over and listen. It had been about an hour of you guys just laying down there listening, breathing softly, and his hand occasionally playing with your hair. It was moments like these that you enjoyed having with him.

As the previous song ended, suddenly there was a loud sound of a piano and a total different genre of music started playing. The both of you shot up once you realized what was playing.

It was “Dancing Queen” by ABBA…

Now, you guys both knew of the song, you were just curious as to how it ended up playing on the mix tape that consisted of Tupac and Snoop Dog. “Oops heh, how’d that get there?”, said Narancia as he sheepishly rubs the back of his neck with a tint of pink on his cheeks. You chuckled at the sight of him being embarrassed, you thought it was cute he had a soft spot for the musical type of genre. “Ah, yes I wonder?”, you commented sarcastically knowing very well he slipped it into the mixtape because he has a soft spot for it. As the song continued playing you both just kind of sat there staring at each other and letting out giggles every now and then.

“You’re in the mood for a dance”

Suddenly, Narancia gets a look in his eye and you have a pretty good idea of what’s about to happen…

And when you get the chance

Narancia eagerly grabs your hands and stands you up, as the song keeps playing you hear him start to sing. “You are the dancing queen, Young and sweet, Only seventeen”, he sings at the top of his lungs, making you chuckle and join in. “Dancing queen, Feel the beat from the tambourine, oh yeah”, you guys both sang as loud as you could, while spinning and dancing together in circles.

As the song kept playing you guys danced and sang you hearts out, not having a care for anything in the world. All that mattered was you and him dancing close together and having the most fun you could ever have with the person you love.

“Ooh, see that girl, Watch that scene, Digging the dancing queen”, you both sang the last line of the chorus, concluding your dance as he dips you down and gives you a kiss. Nothing too strong, but enough to show how much he loves and cares for you.  He pulls away and you guys stare into each other’s eyes for a little bit and eventually he brings you up into a warm embrace. You melt into his arm and the warmth his body carries. With a smirk you say,” So, your a fan of ABBA I see?” Going back to his embarrassed state the two of you just laugh and giggle with each other and resume cuddling while listening to the mixtape.

Mista: “Please tell me you got all of that on video”

Trish: “We will definitely be showing this at their wedding one day.”

So Much For “Lucky” Four-Leaf Clover 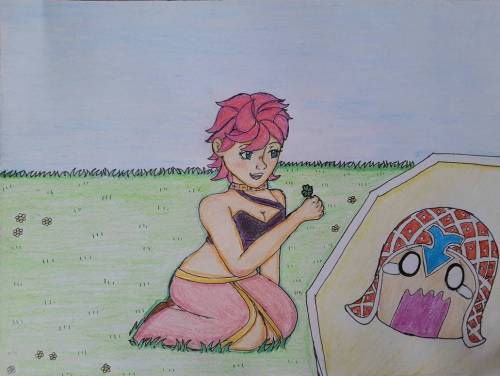 Made a comic inspired by a conversation and doodles from @/pulpdjuice on instagram!

Tag this as ship and see how hard i can punt u into the sun. This is not a ship comic.

Obviously, a redraw of this. They’re literally identical🙄💅

Mista: I think I am in love with Giorno

Trish: congratulations, you are officially the last person to kno–

Trish: I am so fucking done. Bruno and Doppio think I’m in love with Mista. I am most definitely fucking not. He’s weird and dirty and annoying and he’s my bestie. But who does Mista think I am in love with? Giorno! And that’s an absolutely baseless accusation! I’ve barely even talked to the dude yet! And oh god, Narancia agrees with Mista, but Giorno also thinks I have a crush on Gun Man, Fugo is uncharacteristically being a little shit about this entire thing and so far the ONE PERSON who hasn’t bothered me about this is Abbacchio. And you wanna know what’s worse? You wanna know what absolutely drives me insane? GIORNO AND MISTA ARE OBVIOUSLY IN LOVE WITH EACH OTHER. 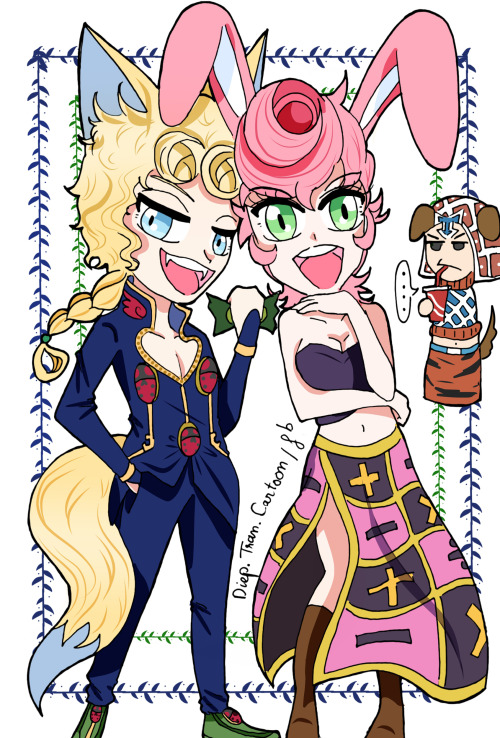 Remember Anon. This was a house that Bruno had far away from the city. Just like Ombra’s house but much closer to the sea. Bruno’s… or should I say Trish’s home is near a lighthouse. A house by the shore and lighthouse that she now owns.

It’s much more spacious then Ombra’s old home. The way to describe it would be like this. Ombra lived in a Cabin while Trish lives in a House with two floors and a garage.

In the garage has all of Bruno’s fishing equipment, his 2 smaller boats that was used for rivers and lakes. In Trish’s home was basically everything she could ever had. Her own bedroom and design it her way. Whatever Bruno had before, it was still left alone because she felt like it didn’t need to be fix. It was like a piece of Bruno and she loved keeping it.

Photos he had of him and his father, photos he took of Trish whenever then went out at sea with his main boat. Those were memories that she kept up forever.

The Mer Bucci Gang like to spend time their whenever they can. They just love to see all the interesting things that Bruno had in his previous life as a human. It was nice company for Trish since she was most alone during the day, but at least during the evening. They would all come to stay and have a nice cooked meal. Of course Bruno just had to be the one to cook, but Trish of course did help out a little from time to time.

With Trish helping to assist in the cooking, she would improve for herself when it came to cooking food. Because of Bruno’s teachings, she had to cook for herself. She needed this independence for herself, it was helping her a lot.