I’m staring at my ceiling again.

My bed feels so empty without them. Cold. Something’s missing.

I’m staring at my ceiling at the little galaxy they made for me. Glow in the dark stars taped on haphazardly when they realized glue wouldn’t work: I can see where they bumped their head, the little dent that they made such a big deal over, it was nothing. It was nothing.

I’m clutching onto the sheets. I’m remembering the way they used to rip them away when it was time to wake up. They made fun of my messy hair. I always laughed, because theirs was even messier.

I’m listening. To their voice: they’re talking to me. They talk to me a lot. They tell me how it’s going to be okay, how they’re in a better place. They keep saying to me, “You have to let me go.”

But I don’t want to listen. Maybe I’m not listening, just hearing.

Anything to hear their voice. Even if it’s crying at me, yelling at me, screaming at me…

I’m staring at the ceiling.

And I’m not letting go.

hi!! 💛💛💛 thank you! My uncle had lots of health complications and I have actually never met him, so while his passing is sad I’m not super upset? If that makes sense?

70: Is there anyone you would die for?

Yeah tbh I really would die for my mom, dad, sister, grandmother, and my closest best friend (who is honest to god a sister to me). All these people really mean a lot to me and without their love and support I wouldn’t be able to be here today nor be myself so I am protective over them. Even if I tend to fight with a few of them at times or have some bad memories, at the end of the day I know they all love me and care about me and would do the same for me, so I would def do it for them

So, I’ve started playing d&d and listening to podcasts

Weird to notice that those things mean healing, but I’m happy about it

I still think it’s really sad that Wilbur never got a grave.

Schlatt got an entire funeral and memorial service, and despite the fact that many spent it mocking him, the funeral was organized with genuine intent to memorialize him and respect his memory. Badboyhalo, the funeral organizer, actually wanted to somewhat honor Schlatt’s passing, despite everything Schlatt had done. Mexican Dream got two separate graves. Tommy made a memorial for him in Logstedshire, and still pays his respects whenever he visits the area. Ponk also made Mexican Dream a gravestone in his graveyard. Helga got a gravestone in Ponk’s graveyard, along with Ponk’s late cat. Even Tommy and Tubbo got a preemptive gravestone, despite them not being dead yet.

But Wilbur? When asked about what they were going to do about him, there was a joke about “letting him rot,” and that was it. Nobody memorialized him, nobody gave him a funeral, and he never got a gravestone. Tubbo mentioned how the reason that he didn’t have a gravestone was that Ghostbur was still around, but Ghostbur has been gone for over a month and a half now.

And what’s even sadder to me is how this left Ghostbur, and possibly even Dead Wilbur himself, with the firm belief that he wasn’t good enough to deserve a gravestone. That he didn’t deserve to be remembered, and the things he did left people with no desire to want to memorialize him. Both Ghostbur and Alivebur (specifically at the end of his life) were both individuals with an incredibly low opinion of themselves, usually to the point of downright self-hatred. Wilbur’s death was assisted suicide partially caused by his extreme amounts of self-loathing, and he died believing that his death was a good thing. He saw Philza, who killed him, as a hero for doing so.

Wilbur definitely hurt people. He definitely did some awful, terrible things. But it’s just sometimes saddening to see how other people got large memorial services or graves, even if they were a villain, but the memory of Former President Wilbur Soot was left to fade into nothingness without even a gravestone left to memorialize him.

y’all i made myself sad going through my archive and i saw a post when my beloved alexei noah was blogging for me and fuck i miss them bro i wish you were here 🥲anyway if y’all wanna check out a cute archived blog, check out @loveplagued! they had a lot of cute aesthetic pink, blue, japanese stuff but it’s not fetishized for once

The god of Mischief’s eyes darted with a brilliant frenzy in the cold, dim corridor of the alien vessel, he pulled point of the chitauri staff from the beastial scout. Holding the weapon at ready as he stepped silently, seeking his escape.

My name is Thanos.

Loki slammed against the wall, squinting his eyes shut terribly as he muttered every incantation of fortitude and barring off the mind he could remember.

The universe stands in grave peril.

Gritting his teeth, he pressed himself forward, “Thanos,” Loki spat, “Know that all this effort to keep me bolted down and restrained is for not. I am Loki of Asgard, and you will not survive the storm that is waiting for you.”

The storm waiting for me? Loki…I, alone, have looked into the darkened corners of your soul…and know you for what you truly are.

Loki gave pause, he heard the movements of the chitauri seeking him out, “I am Loki, of Asgard.” He repeated.

The ship groaned, the florescent lights in the walls grew painfully bright before a harsh impact against the ship sent Loki rolling. The dust settling, Loki laughed, pushing himself up, “The storm, Thanos…the storm’s a-rrived.” He looked up, the massive alien warlord towering above him.

Thanos stepped forward, “I have news for you, Loki, of Asgard. I still might be able to save your green hide, but I can’t do it alone. I need your help.” He offered his outstretched hand.

He sneered, and wrapped his fingers around the hilt of a knife not yet present in the physical world.

“Looooookkiii!” Bellowed out in the corridor.

Thanos turned, the Hammer struck down, and it’s thunder rumbling loud and grim. Dropping Thanos to his knees, Thor struck him once more on the shoulder. Dismissive of the Titan as he stepped forward towards Loki.

Loki let out an exasperated chuckle, “You know, I’m actually really happy to see you.”

Thor helped Loki to his feet, “You were not easy to find, Brother. This place is…dark. Heimdall called it an abyss.” Thor turned looking around them, at Thanos.

Loki could only nod in the moment, “You’re…not mad?”

Thor turned his gaze back to Loki, “Brother…you committed treason against Odin.”

“You destroyed a world, Loki, filled with people.”

He shook his head, but the movement were minimal, “I….I have no excuses, I was lost and scared and…please, Brother, have mercy.”

Thor trembled, his chin locked and his eyes looking deep into Loki’s, “Loki, I-aaargg!” His scream grew limp as the fell double blade of Thanos pierced through the Odinson.

Loki looked up at them, gasping for breath.

“All the more valuable when he finally breaks.” Thanos said.

A rant I posted on my Instagram story earlier. It was originally triggered by someone I followed ODing and I’m presuming they died (their account is gone) and another person I follow being harassed for making vent art to cope with his trauma.

The ‘veteran follower’ thing is relating to people who’ve stuck with all my Instagram accounts since I joined in 2018-ish (I’ve been online for longer than that, but that was when I started calling myself Judy)

Btw, the inappropriate behavior being referred to here is exhibitionism, blatant sexual comments and behaviors towards others, and no concept of privacy or boundaries. And yeah, this ex-friend was transphobic but tried to hide it and highly judgemental of my interests. She also apparently talked shit behind my back and told people things that I didn’t want shared, and there’s probably some other shit that I’m not aware of, so yeah she was a bad person.

I just don’t want anyone to be hurt because they’re traumatized.

Okkkk so I just talking about an old german nursery rhyme, that is one of those actually really gruesome things you tell children without thinking about it. And obviously it made me think of the witcher. So, bear with me I will try my best to translate.

if he falls, he screams

if he falls into a ditch,

he will be eaten by ravens,

if he falls into a swamp,

the rider will (make a) 'splash’

A little bit weird for a nursery rhyme, right?

It’s a song about a rider falling off his horse and dying, depending on where he falls, his body will either get eaten by birds or will decay in swamp water.

It’s not something you would call child-friendly, but it’s a very given song in Germany. So…. Witcher nursery!

Reggie after eating the hot dog: People are making ghost jokes like there’s no tomorrow..

another day passed where i haven’t died! let’s hope for tomorrow! :^) 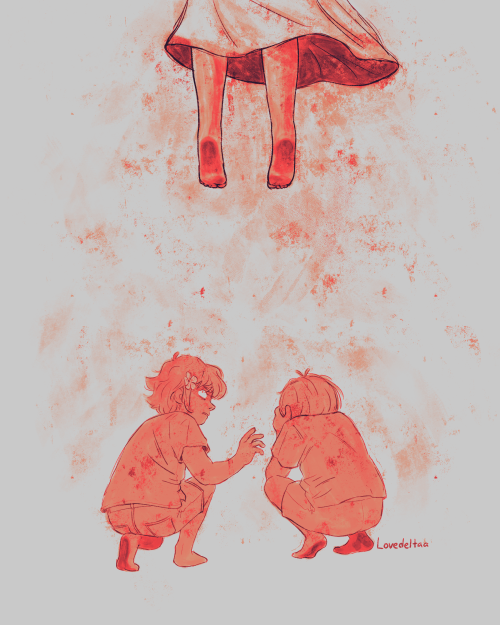 ―like seriously you know vespera’s, gisela’s, ruy’s, and gethen’s full names, not to mention that cassius would have met gisela’s family, and that the council held court against ruy―

―but it’s just a theory a game theory―

enchanted/wildest dreams live has enough power to kill a man on its own but the fact that miss taylor swift decided to sing ootw live immediately after??? how did people show up to the 1989 world tour and survive is what i’m saying

vaguely described body horror in wandavision described under the cut

Skid is the Grim Reaper’s son, and he likes to cheer people up who have recently died and are terrified as they walk to the afterlife