“I’ve been waiting for the day.”

imagine someone who thinks they might be a psychopath or was diagnosed as one and googles it to see a MURDERER AND THE DEVIL. menial illness is so fucking demonized and vilified in are world. like maybe give these people some actual helpful resources to CHANGE and GET BETTER. instead of articles souly for mentally well people STAYING THE FUCK AWAY FROM THEM AND HOW. that’s not helpful. that’s not helping the people who want to change or get better. this is a extreme search but narcissists, sociopaths, schizophrenia, bipolar etc all get the same treatment. its always how to avoid them and never how to help them.  like YEAH if they are being a crazy asshole, CUT THEM OUT but if there seriously a nice person worried about there mental health and finding out that they have a disorder that the media deems as EVIL. like wow way to CREATE CRAZIES. way to isolate the mentally ill to the point where they become what u want them to be.

#like god. ive been around people will all those illnesses and there nice people#theres a diffrence#those mental ilnesses can LEAD to such evil things but not everyone with them are insane loonies#vent#tw murder#tw mental illness
3 notes
greyeyes-and-stormyskies
Text

Actual Me: *dreaming about being k*lled*

Actual me: *wakes up abruptly and confirms I’m actually awake*

Zeus: *appearing at the foot of my bed* are you alright? You seemed frightened. Awful dream.

Actual me: Yeah, I’m fine now. Did you actually help me?

Zeus: Of course. I couldn’t ignore that plea, dream or not.

Actual me: Oh. Thank you.

Zeus: No worries. I’ll wait here until you fall back asleep.

Actual me: *falls back asleep a few minutes later, no nightmare, and wake up peacefully*

Actual me: damn. he really came through for me huh.

people in this fandom: dabi is evil cus he tried to kill shouto and not just endeavour

me, whos had serious thoughts and fantasies about merking my parents cus i know itd hurt my abuser:

Grelle: When she first became a reaper and was going through the academy, Grelle endured a fair amount of bullying from her peers. However, she had no qualms about fighting back; any reaper who insulted Grelle to her face or laid so much as a finger on her quickly regretted it. She knocked several people’s teeth out, and broke one particularly transphobic death god’s arm so badly that it never really worked right again, even with divine healing abilities. Word soon spread that you did not mess around with Sutcliff if you valued life and limb. Although it didn’t stop the whispers and microaggressions, the more overt acts of violence against her petered off.

Madame Red: During her killing spree with Grelle, An sometimes had awful nightmares about the prostitutes they murdered together. She’d be frozen in place as a pool of blood slowly spread around her feet and inexorably began to rise, threatening to drown her. All the while, her victims would stand before her, staring at her in judgement and condemning her for causing their deaths. An would typically wake up screaming, though on a good night Grelle would be there to comfort her.

Frances: Although she’s fully prepared to kill her adversaries if need be, Frances abhors wanton, unnecessary violence. She’s always had more respect for life than her brother, and believes that killing is an ugly thing, even when it’s unavoidable.

Mey Rin: During her years with the Qing Bang, Mey Rin couldn’t openly express the hatred she felt towards the members who killed her friends. However, whenever she did target practice, she’d envision shooting the bastards again and again and escaping the cage in which they’d imprisoned her.

Ran Mao: For the most part, Ran Mao is unflappable, so she doesn’t get truly angry that often. One time, however, when Lau had had a bad day and was snippy and rude towards her, she retaliated by going off and smashing all his opium pipes to smithereens. Needless to say, Lau didn’t make that mistake twice. XD

Rachel: Though sweet-tempered and loving, Rachel had her moments of anger. Early in their marriage, before leaving the manor one night for a Watchdog mission, Vincent fibbed and assured her that it was a reasonably safe assignment…when in fact his target was among the deadliest he’d encountered in his career. If Diedrich hadn’t been with him that night, Vincent would have been added to that criminal’s body count. When Dee brought home the badly-wounded Vincent, Rachel was hysterical. Once she knew for certain he was on the road to recovery, she gave Vin the tongue-lashing of his life. She knew what she was getting into when she married the Queen’s Watchdog! Even if she didn’t walk through the shadows with him, she wanted to stand by his side as his wife and partner, not an empty-headed, pretty little thing who had to have hard truths sugarcoated for her. Impressed (and more than a little intimidated) by Rachel’s outburst, Vin apologized. Although he still tried to shield her and the children from the worst aspects of his position, he never lied to Rachel about Watchdog business again, and kept her in the know as much as he dared.

Lizzy: Although Lizzy and Edward love and are deeply loyal to each other, they’ve had their quarrels as siblings. One time when they were kids, Edward accidentally broke her favorite doll while they were playing together. Later, Lizzy exacted revenge by throwing his toy soldiers into the fireplace, where they all melted. The anger didn’t last long, though…she burst into tears when she realized how upset Edward was. After receiving a stern talking-to from their parents, Edward and Lizzy hugged it out and let bygones be bygones.

Sieglinde: Sieglinde knows she can rely on Wolf to protect her, but she’s a big believer in being prepared for any eventuality…when you’re affiliated with the Phantomhives, you tend to acquire a few enemies along the way. She’s designed special wheelchairs (and modified versions of her Arachne Patousa) with weaponized features that she can activate at the press of a button, like the tech out of a spy film. >:3

Wait hiromi was murdered too?! Nooooooo

SATORU’S MOM KNEW WHO THE MURDER WAS

Me (autistic, ADHD), whenever I hear about parents killing their physically/mentally impaired children and other people shower them with sympathy because it was “so hard”:

#just say disabled people are better off dead#is the system stacked against us? yes#but does that give people the right to kill us? fuck no#I’m so sick of this#disablity#neurodivergent#tw murder#tw infanticide
6 notes
clickbait-official
Text

Some people’s deaths get loud

Some people’s deaths get closure

homeless man that eats a lot of cheese and kills people 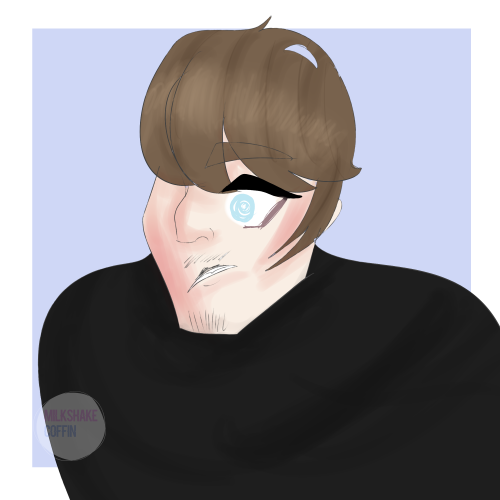 Blue: First who would you kill?

Ink: *shrugs* I would kill me too.

Me, Myself, and the guy whole stole blow from [redacted]
(I was expecting you to take over and not just stand there haha) 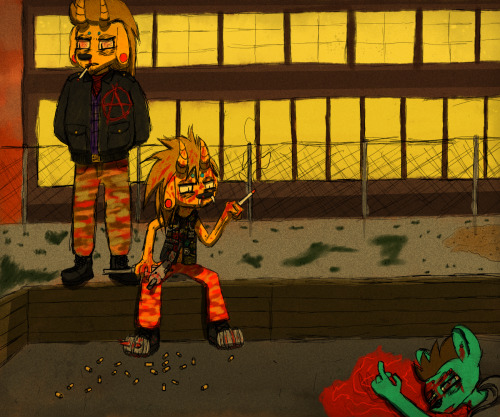 Two in one day?! Have some more Among us au!

“Do you see anything?” Bim hissed, trying to concentrate, even as his gloved hands shook too hard to properly weld the plating back over the wirebox. Every creak or otherwise normal space-ship noise made him jump, and he gave every vent a wide berth, certain that, any moment, the last imposter would come lunging out of it. “Dark?”

“If there were something to see, I would have told you!” Dark snapped, irritation muffled by the opaque screen of his helmet. He came over, boots clanking over the metal floor. “Aren’t you done yet?” He demanded, hovering over Bim’s shoulder. “We don’t have much time.”

“I know! I- fuck!” The welding torch overloaded, sparking and fizzing wildly. Blind panic swept over him and he hurled the torch away from him; it hit the wall with a deafening thunk and fell to the floor, dead.

“What the fuck are we going to do now?” Without the torch, he couldn’t finish his task. Without that task, they couldn’t keep the ship running and the imposters at bay.

He could practically hear Dark’s eye roll, and a few moments later a new torch was pressed into his hand. “Don’t fret, Trimmer. I brought mine.”

Bim breathed a sigh of relief, and turned back to the nearly-covered wirebox. He was almost done. Then they could leave electrical. Then they could rejoin the others. “Hey,” he remarked, after a long silence, “do you really think the doc was an imposter? Like, could he have really killed Host like that?”

There was a pause. “There was too much evidence.” Dark grumbled, seeming irked by the question. “You did vote for him.”

“Everyone voted for him.” Bim pointed out, snapping off the torch. He happened to glance at it as he handed it back to Dark, noticing with a jolt that it wasn’t black, like Dark’s should’ve been. It was brown.

He registered this at the same time the lights above them flickered. He glanced up. They went out.

Dark stared at him.

“Dark?” He whispered, but he would receive no answer. Not in words. He could only watch as a gaping maw opened in Dark’s chest, gleaming with rows of wickedly sharp teeth dripping with viscera. A long, forked tongue immediately lashed out, wrapping around Bim’s chest and arms and squeezing him tight, forcing out a choked gasp.
“Dark-!” Was all Trimmer managed to get out before he was gone, sucked into the wide, monstrous mouth.

Ten minutes later, Wilford and Google Blue would come looking. They’d fix the lights, restoring power to the entire ship. They’d look for Bim, knowing he’d come to electrical to finish a task and knowing no one had seen him come out again.

They’d find a dark splash of blood on the wall, thick with offal and bits of gross matter, and they’d know. Immediately, they’d know.

Hera: If I were on the edge of a cliff, what would you do?

Hera: You’d never do such a thing to your own mother, I don’t believe you-

Hephaestus: You would on the way down :)