tw for ed, sh, and assault

I had hope for me

why I look down when you pass me

the pain of electricity when you graze my arm

and the steak knives

and you will miss them

but this is healing

when my body feels this empty

I begin to think

it can only be filled by another person.

I see scars on my body

in places they should not be.

by a sick version of myself,

I am urged to make more.

and then I finally knew

when they said they would rather look

at someone watching something beautiful

instead of the beautiful thing

The ache in my stomach

Reminds me that I am empty

And I get high off of it

Saw this and just knew I had to post it, cause… Yes…

Hello Anon! I can’t say I have much experience writing about sexual tension (it’s all about the emotional tension for me), but I do think I have a couple ideas on it.

Tension is created as a product of actions or words making someone feel hesitant or uncomfortable. It’s what’s left unsaid and undone; the “I want to tell you this/I want to do this but I can’t/I’m not going to.”

1. This character/both the characters want to

2. This character/both the characters are not going to

The second one probably is the easier of the two to establish; the reason why they won’t can be anywhere from they feel uncomfortable with the communication it requires to they’re not allowed to because of social/cultural norms to they’re unable to in the current situation (because there’s other people around, because there’s not enough space, because one of them is sick, etc.)

So the question remains: How do you make your characters want to?

What actions or situations in this culture are considered romantic or sexual? How might these two characters end up in those situations, or end up performing those actions?

For example, in American culture, hand holding is largely considered romantic. So if I was trying to develop romantic tension between two characters, I might put them in a situation where they need to hold hands–they’re lost in the dark and don’t want to get separated, they accidentally got handcuffed together, one did it instinctively with the other when they got frightened.

I’m not exactly a smut writer, so I don’t have a huge amount of experience with sexual tension at all. But consider the actions that, in whatever culture you’re writing about, would typically preface sex.

Ideas based on American culture, simply because I’m American and that’s what I’m familiar with:

The important part about it, though, is that whatever happens to generate tension only makes them think about the other person that way. Whatever feeling they may be having – physical or emotional – should exist regardless of whether or not there’s tension between them at any particular moment.

Since I’m no smut writer, I’d normally send you to someone who knows more about it than I do, but I’m afraid I don’t know of any writers who exclusively or notably focus on sexual tension/smut writing. If you do know more about this than me, feel free to give advice!

So, maybe this is very asexual thing to do, but I love listening to songs about love or s3x then head cannoning it to mean something completely different. Allos can make anything a metaphor for s3x, so it’s only fitting that I canhead canon s3x a metaphor for literally anything else.

Agony from Into the Woods:

What it’s actually about: Falling in love with the idea of a person and the act of pursuing them.

My head canon: The woes of having a goal based value system. Enjoying a skill, craft or studying a thing but not having talent in that thing, thereby feeling great ‘Agony’ in never being masterful in a thing you spend so much time doing.

If my mom ever, during my teenage years, would have gotten a handsome boyfriend. I’d be down to be his dirty little secret…

Yes I got daddy issues, what about it?

wow now that i labelled myself as asexual i realised how weird and gross sex is. and im noticing that i thought so in the past too but i always brushed it off bc everyone told me “i need to find the right man” 🙄

two of my favorite phrases are, “just fuck me in the ass with a razor bladed knife.” and “well, fuck me sideways into next Wednesday!” and i dont know why. (im fucking asexual) i almost had a panic attack at WalMart today, i want to die and I want nothing more than to get small but i cant. so how are you doing

My mom is like the opposite of the parent that doesn’t understand what you’re going through.

ANYTIME I come up with something she says she knows that and proceeds to tell me a funny story about that one time a boy tried to kiss her and she was repulsed like shit and rejected him with a stupid excuse.

I am PRETTY SURE that when I come out to her as a lesbian she’ll say “Oh yeah, I used to think that too. The s3x was not bad tho.”

I’ve tried therapy. Many therapists have come and gone. I’ve tried anorexia, starving out the hands that were pushed down my throat. I’ve spilled my guts over the Snow White tundra of the toilet bowl. I’ve screamed into pillows. Mottled myself purple, red and green. Slit myslef apart like I’m made of nothing but rice paper. I’ve been violent. I’ve been cruel. I’ve only looked out for myself. I’ve put everyone else before me. I’ve known god in a church, Buddha in a bedroom, the true blue pain of atheism. I’ve seen one highway, and many more. You’ve seen one desolate ruined road you’ve seen another. I’ve hit my head. Broken bones. Broken hearts. Done violence before violence was done unto me. I’ve cried so hard I threw up. I’ve kissed another faggot beneath an overpass and loved him so falsely I forgot what had happened to me in a bedroom in 2009. The sound of hand against pubic hair. Skin against skin. I’ve been sex repulsed for years, and still I crush his windpipe beneath my hand and nip at him like I have something to prove. I’ve wished that he never touch me again and I’ve said yes even though I didn’t want it. I’ve had sex as a chore and I’ve had sex for fun. I’ve woken up an entirely different man named Angel at a sleepover last month and waited awake for three hours until he dissipated and I remained. I’ve lost people. Lost friends. Said “fuck you” and blocked a million people, assholes and well-meaning indiscriminately. I’ve hallucinated a hospital around myself. Lost my age and became a baby, slapped the sharp edge of a knife into my thigh to quell the jealousy. I’ve sent nudes to a group chat of near strangers, looking for the high of validation and connection. Been misgendered once on accident and that relationship broke in a way that will never be mended. I’ve nearly thrown myself off a cliff. I’ve lied. Cheated. Coveted my neighbors wife. Saw a woman with honey blonde hair and sun-dipped freckled shoulders pulling at a sun dress in a Safeway and known god. I’ve despised cis men in holy throes of hate. I’ve lived and god I’ve lived so long that inside I’m 105. Inside I am growing wrinkles and cancered and failing and Jesus I feel like it’s time. God I have lived so much. How could anyone expect me to keep going? For what? I’ve done everything. Sucked a whole violent sunset through my teeth. I’ve done everything, everything, everything. There is nothing left.

First of all, I’m right. Spoiler alert for… Pierre, I guess.

2. Pierre is stated to be a former professional boxer. Any sort of boxing and wrestling is an inherently homoerotic sport. Only gay people do wrestling. I mean, come on. It’s a bunch of buff, sweaty, mostly-naked dudes fighting.

3. Honestly, just look at him.

this is my essay ty

That’s not what i followed the trade tag for😂💀

And in all honestly, i don’t even remembered what i followed it for since i’ve never seen it pop up and i followed one hella long time ago.

Love, that’s spot on for Demi. If you came to me looking for validation or reassurance of your identity, here it is: you are a valid Demisexual/Demi romantic <3

what you’ve described is very much in line with what I experience too, and if you feel the terms fit you comfortably, then you’re very welcome to use them.

And hey, even on the off chance your inclination was wrong, or your position changes, or you’re using a term that isn’t quite right when another would fit you better, you have the freedom to change the terms you use and no one can tell you you’re wrong but you.

You’re valid, friend. And best of luck in your relationship endeavours. Hope this helped <3

On a completely different note from all the genuinely lovely post-stream messages the majority of y’all have been filling my inbox with tonight:

I already went ahead and blocked the anon in question on sight, but hey! Here’s a general reminder to not be a fuckin’ creep and send me weird sex asks, ‘cause I’m rockin’ a zero tolerance policy round here ✌️✨

#screenshot is under a read more but idk if that works on mobile so please scroll past if this seems like an uncomfy thing for any of y'all!#daily dork#tw sex mention#tw whatever the hell else is going on in this ask#i don't know at what point in the multiple-step process that is sending a tumblr ask that they thought THIS was a thing to say to a stranger#but hey ho#oop forgot to tag:#tw swearing#tw cursing
593 notes
thatonegirltw
Text

The Three-Body Problem by Cixin Liu, translated by Ken Liu

Brief summary: In present-day China, Wang Miao, a nanotech researcher, and Shi Qiang, a detective, investigate the recent suicides of prominent scientists and their ties with a strange VR game called the Three Body Problem.

Wow, what an enjoyable read. I’ve been trying to branch out in the sci-fi that I read and I can’t believe I’ve been missing out on this. Compared to say, Neal Stephenson, Cixin has just as much (if not more) technical detail in his writing that I LOVE without the annoying insertions of Stephenson’s weird sexual fantasies, objectification of women, and use of slurs (pretty par for course in mainstream hard sci-fi, unfortunately). The Three-Body Problem is very information dense, as there are references to Chinese history and culture, notable physicists and mathematicians, (astro)physics, etc., but these digressions add so much richness to the story.

I was initially skeptical because the premise of the novel involves aliens, leading me to believe that it might be more fantasy than sci-fi. Don’t let this dissuade you from picking it up! I was impressed with the realism that Cixin treated his story with. All in all, 10/10, will be reading the next two books in the trilogy. Hopefully the in-the-works Netflix adaption will do it the justice it deserves. 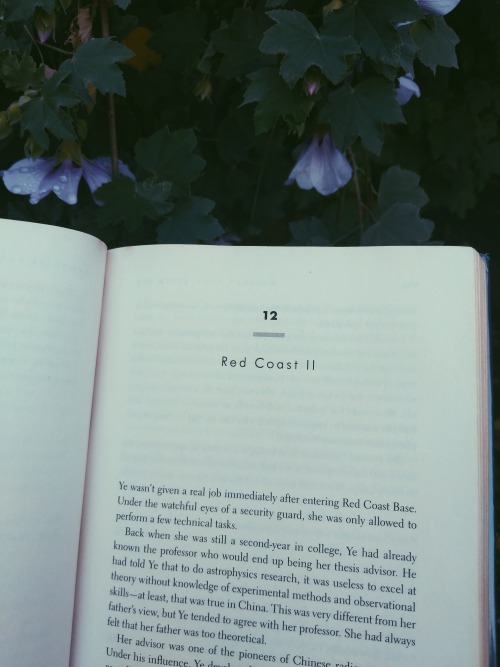 Casey and Karai: *takes one sip of beer*

Casey: So are you drunk enough yet to sleep with me?

i was sexually assaulted at age twelve

and i let this happen for fucking months

how did i not realize he was bad for me

I wonder if people like Philip Pullman and George R.R. Martin know that their “BUT WHERE’S THE SEX???” “criticism” of Tolkien is literally a punchline among serious Tolkien fans.