they say that my body is an art created by stardust and sparkles. then maybe i don’t want to die, i just want to go back to the artist who made it? maybe my life it’s a tragic mistake.

#depression, #tw suicude, #loneliness, #selfhate, #and what am i do to myself?, #idk maybe it's really just a tragic mistake
0 notes · See All
thin-imaginesText

does anyone know how often youth suicides get reported and on the news in the nyc area? asking for a friend.

Oh my God I can already see my life as unhealthy lifestyle™ adult with a stable friend who’s got a partner and we talk on the phone about all the shit in doing that’s all my own fault and I’d end up almost always disappointed or disappointing everyone around me. I’d go out to drink and end up being run over by a drive who didn’t see me drunkly walking across the road

Best way of forgetting the pain.

It’s never ever good enough for me.

Call me crazy, a psychopath, sociopath, demented, or just insane. I don’t care.

But when I say that I wish you’re attempt was successful, I fucking mean it.

(This is not directed towards you reading this, but to someone else who will probably never see this)

It is 3am, sit back and watch me scream until the stars wake up and shine brighter than they’ve ever done in the past hundred years. I pace back and forth in my empty kitchen wondering why I don’t open a vein and then drink and drink and drink till the silent numbness takes me over.

If you intend to send me any more of these, please make sure to double check your spelling next time, took me a moment to figure out what the third one meant…

But yes, I won’t respond to these, I apologize. 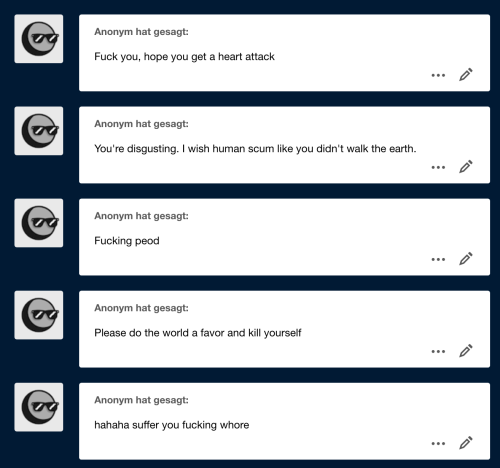 One thing no child should have to go through is extreme loss. Weather it be loss if a parent, a grandparent, a sibling, any other extent of the family, or a friend.

There is a reason adults tell you to not play by the road. Or not to go into the street.

A young boy named Virgil, and his friend Roman bad learned that lesson the hard way on that one fateful day…

It was a nice warm summer’s day. The kind where children are literally everywhere. In yards, in pools, in parks, praxtly anywhere a child could possible be, there is a child there.

Virgil and Roman were playing in Roman’s rather large front yard. The two had invented some variation of tag. To tag the person you had to hit them with a ball. (Head shots didn’t count.) After one person was tagged the other had 10 seconds to get a heads start.

Virgil had missed Roman with the ball. It ricocheted off a nearby tree and into the road.

“We should have your parents come get it Ro.”

Roman shrugged. “Noncence my dear princess. I’ll go get it.”

Virgil’s eyes widened in fear. “Roman don’t they tell us in school to not go into the street?”

“Virge there is literally no one ever going down this road. I’ll be fine,” Roman assured with as much confidence as an 8 year old can.

He was about half way to where the ball had landed when a car sped by. Quite obviously going way above the speed limit. Before Virgil could even warn the other boy about the car it smashed into him.

The driver didn’t even stop.

Virgil later learnedfhat this was called a hit and run. However in the moment his shrieks were so high pitched and loud that practally the whole neighborhood showed up. A woman that was the events out of the corner of her eye from her window called 911 imidatly.

Roman died in the hospital later that night.

Virgil on the other hand never quite seemed to move past his greif and guilt. Feeling as if he tried harder to stop Roman, or if he never threw the ball, his best friend would still be alive.

Virgil was 18 now. This was 11 years ago. Roman would be 19. They would be graduating high school and getting ready for college.

Virgil stared at the cup of drain cleaner in front of him. He knew if Roman would have taken his own life he would have done it this way.

At the time of his death Roman was already a huge Broadway fan. Virgil knew he would’ve made a great JD if he had lived long enough to learn about Heathers.

He grabbed the cup and downed the toxic fluid. It hurt quite a bit as he struggled for air. But it was only for a moment or two before his world fadded to black and his heart took it’s last beats.

There is a reason adults tell you to not play by the road. Or not to go into the street.

It can have severely disastrous, or leathal, consequences.

Blame MatPat for this. I was binging the FNaF Game Theories today and I got through like half if them.

Someone posted a picture of their bleeding cuts on Snapchat and I’m not fucking vibing with it. It just makes me more enticed to do that again (not post it)

Things have gotten so bad, I’m drowning in the loneliness

My thoughts aren’t my friends

My friends have vanished

I don’t think I want to survive anymore.

You know when you think you’re doing better, but then suddenly it’s like you’re back at square one trying to survive the minutes and it feels like the end of the world because you feel like you’ll never get better and find stability in yourself

I hate myself and don’t want to be here anymore

Synopsis: Alexis O’Brien is about to get married but memories of her old life are coming back to haunt her.

NO ONE UNDER 18 should read this story. This is an 18+ blog. This story will deal with very dark subjects such as death, severe depression and suicide attempt (among others) if you’re triggered by any of those issues, PLEASE DO NOT READ THIS STORY

A/N: In most European countries the legal age to drink is 18, as Cordonia is clearly in Europe, I ‘ll use the same legal age.

Disclaimer: All characters belong to Pixelberry.

THANKS TO:  To  my awesome beta read @pedudley​

And to the beautiful  @burnsoslow​   who beta read the whole scene with Liam.

I love you both!!

I really wanted today to be better, but I stared for about 2 hours at my homework without doing anything. I’m just tired of my brain. I just want to feel normal. I have no idea what the fuck is wrong with me but i just can’t do this any longer.