I love these two dorks!

Learning some stuff or trying to slowly get to hands

( I forgot to get the lines colorized up oh well)

It’s been a while

I have quite a few little, inconsequential Qrow headcanons that just make me happy to think about for some reason. Here are some of them.

- Qrow sunburns relatively easily, and because of this, he wound up with freckles on his shoulders, back, and upper arms.

- Qrow has an allergy to almonds. He didn’t realize this until he was an adult while he and his family were eating out and Ruby ordered almond chicken that she wound up not liking. Qrow swapped plates with her… And wound up having to go to the hospital over it.

- Qrow and Zwei don’t always get along because the dog tends to chew on his things, but Zwei does get really cuddly if Qrow’s been away from home for long. Qrow pretends to be annoyed, but he actually likes it.

- All the members of the inner circle tend to leave a window open in their homes in case Qrow can’t find a place to stay for the night or gets injured and needs to land quick. Tai does it too. It’s very comforting for Qrow.

- Because of growing up sheltered away from normal people in the Tribe, Qrow went to school without knowledge of some pretty normal things, and as a teenager, he had a really hard time understanding figures of speech and expressions. This isn’t nearly as big of a problem with Qrow in his adult years, but he’ll still hear someone say something like ‘stuffed to the gills’ and get confused.

- When Yang and Ruby were kids, Qrow got the reputation of being the household fixer, and they’d take their broken toys or appliances to him to fix. Of course, things broke more when Qrow was home, so he always wanted to do the work of fixing them, but it made him happy whenever the girls would start praising him for it.

- Qrow almost always made it home for Christmas, and it’s his favorite holiday because of how happy Ruby and Yang always were that he could make it.

- Qrow finds it fun to flirt here and there and is confident and cool in casual dating, but once he starts actually liking something, he gets awkward and bashful about it.

- He gets nervous in vehicles. He always feels like something is gonna go wrong or break. In cars, he’s always worried about the other vehicles running into them and when he’s riding with Tai, he points out any car he thinks is driving recklessly. It’s very annoying for Tai, but he tries to be patient. 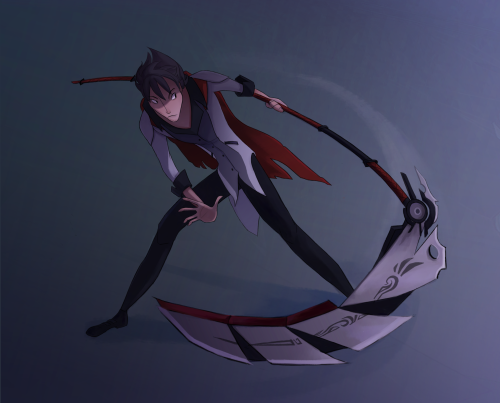 Summer: So Ozpin turned you two into birds?

Raven: A crow and a raven. Ironic.

Tai: So you’ve become that which you’re named after.

Qrow: Yeah, you got a point to go with that?

Tai: Are you two allowed to have poultry, or is it cannibalism now?

Summer is thoughtful. Tai is innocently smiling. Qrow is angry. Raven is scared.

Qrow: An important question? Here’s one! WHY IS MY NAME SPELLED WITH A Q!?

That feeling when tomorrow is Saturday

Listening to Bad Luck Charm, and just… Guys, the song, the Qrow V Tyrian fight, Qrow in season four and five… It was so good. This song is making me remember why he was literally my favorite character.

and today i present,,, a Qrow Branwen edit