#did you miss me and my silly jokes, #and the lowercase, #i fucking hate the fancy typing yall do, #kuroshitsuji, #black butler, #rciel, #ociel, #manga, #vague spoilers, #undertaker kuroshitsuji
16 notes · See All
marcxangPhoto 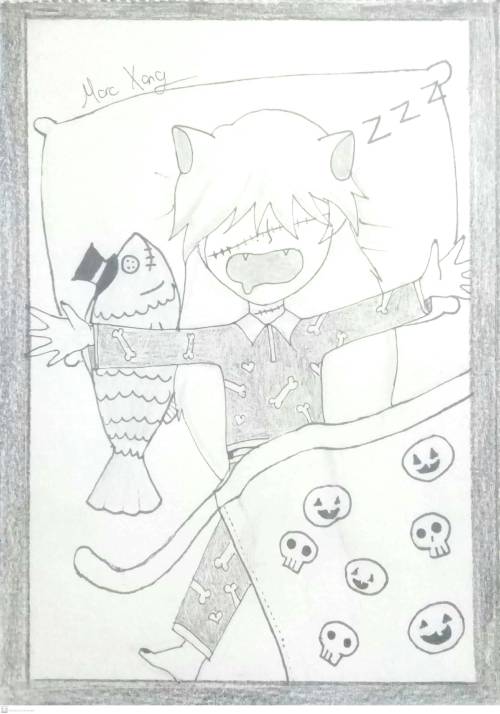 Yknow this manga is getting boring, I think we should just get Undertaker and r!Ciel to tag-team wrestle Sebastian and o!Ciel.

OKAY guys who do you think that butler is…I‘m guessing sb that used to work in the Phantomhive manor or sb that has ties to Undertaker/The Phantomhives…But I haven’t had much time to think about this so please tell me!

By R!Ciel’s side, and in doing his duty by him as butler, Tanaka appears cold, as if he is just going through the motions, whereas he was a far more animated individual in O!Ciel’s service, often going above and beyond the call of duty and clearly doing what he did for O!Ciel out of care and respect as well as duty.

With R!Ciel, he appears to have checked out, and while he does his duty, there is none of the feeling.

I think that Undertaker, to an extent, shares this disconnect. In Chapter 151, R!Ciel asks him for assistance with his Earl duties twice, but is flatly rejected both times.

This struck me as a little odd. Whenever O!Ciel asked Undertaker to do something, though Undertaker was never willing to give his assistance without proper ‘payment’ (laughter), he at least offered O!Ciel the opportunity to get what he wanted (and O!Ciel did). Even when his true identity was revealed!

With R!Ciel, Undertaker completely snuffs the possibility of even trying to help.

Yes, he really might not have a single clue about how to do what R!Ciel is asking of him, and I might be thinking too much into it. He would probably be a crap butler, but so was Sebastian when he started out. Undertaker knows this. Besides, wouldn’t Undertaker just find it hilarious, especially the reaction of his disgusted master when he shows him how terrible of a job he made of… well, everything!

I’d imagine Undertaker would much rather have that than sit in one place and read a book for two hours.

For Undertaker to make excuses, however true they might be, seems weird. He is speaking to ‘Earl Phantomhive’, whose predecessors he has assisted and cared for for at least two generations.

I wonder if this may tie in to the RCMT - Real Ciel Mastermind Theory, in which R!Ciel had involvement in or outright planned the Phantomhive massacre.

Undertaker would know this (as he rescued the boy and his ‘episodes’ from the fire… at least he claims to have anyway). If true, then Undertaker would have more than enough reason to only assist the boy insofar as it benefited his goal, but nothing more.

R!Ciel appears to respond in kind, by being curt and rude towards him, in spite of the fact that he owes Undertaker his ‘life’.

Alternatively, Undertaker’s response to R!Ciel’s requests may have to do with both his and Tanaka’s (seemingly) shared dislike of R!Ciel’s readiness to get stuck into his role as Earl (and, more importantly, Watchdog).

Very glum faces, both. I’m very interested to see their dynamic and relationship going forward, how much their shared long history as people close to the Phantomhive family informs their actions and connection.

Anyway, it seems clear that neither man is thrilled to see R!Ciel jump into O!Ciel’s shoes, most likely because they know what the role entails, possibly because of what it means for O!Ciel, or a mix of both. Maybe they fear what R!Ciel will do, what his newfound power could cause, for himself and O!Ciel.

Undertaker, as we know, hates the Queen, the Watchdog duty she places on the young Phantomhive heir, and now R!Ciel has returned, to see him willingly take that burden and that tragic fate on his shoulders must rankle Undertaker as much as it did with O!Ciel.

It’s difficult to know what Tanaka is thinking. Perhaps he is concerned for O!Ciel, or wary of R!Ciel’s intent, or perhaps he shares Undertaker’s desire for the boys to free themselves of their duty and heritage and find happiness.

In any case, Undertaker dragging his heels and rebuffing R!Ciel’s requests come in stark contrast to his attitude towards O!Ciel back when he was still ‘just the undertaker’, and I’d be willing to bet it’s more than just “I just can’t be arsed, kid!”.

I found out that the Crypt Keeper from the Tales From The Crypt had a very different appearance in the comics, and an even creepier appearance in his debut (pictured here). I saw it and I immediately thought ‘Oh my God, that’s Undertaker!!’.

“‘He fell to the floor with a thud, and his brains were scattered all over the carpet…’ Hi-hi-hi, I wasn’t finished yet, come out from that cupboard, kiddies! You’ll miss the best part!” 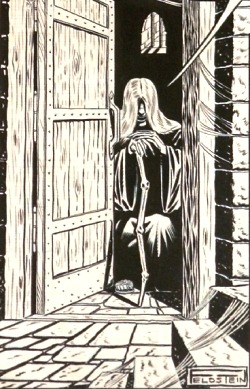 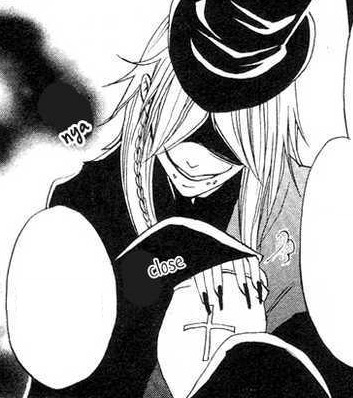 Imagine these three in a basement doing IT. No, two of them doing IT, and Undertaker living in the storage closet. And Grell supervising them. 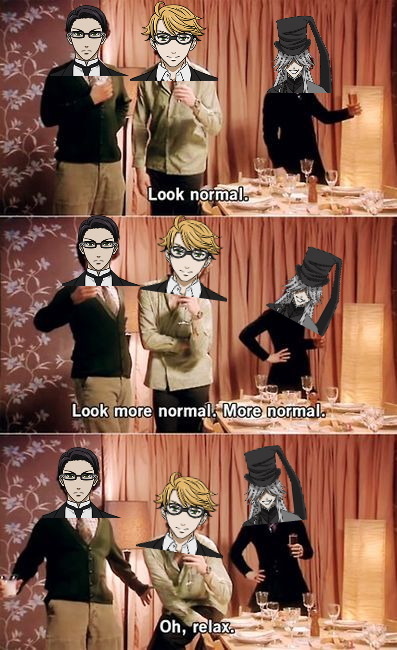 Earlier on I thought about how torturous the headmaster job must have been for Undertaker. Yeah, he got to see O!Ciel and other kids do crazy cricket nonsense, but he couldn’t laugh about it! He’d blow his cover in five seconds!

My bet is that Undertaker left the match because he had to find somewhere quiet to bust his ass laughing or else he’d hurt himself.

Chapter 151: That Undertaker, Pretending to Read.

But seriously, I love the little details like this, where UT is holding a book close because he, being a horribly near-sighted grim reaper, wouldn’t be able to see it otherwise.

Edit: Even though I’m 99% sure he can’t see it anyway because of his goddamn fringe, Jesus UT cut your hair! XD

He’d be the perfect assimilation of Mey-Rin’s terrible eyesight, Finny’s overly-enthusiastic strength, and Bard’s ignorance. And he would be doing everything Sebastian did - which is their jobs, and the rest.

Edit: Also, this is a man who has worn the same goddamn outfit for fifty years. His hair is canonically stated to be shiny because it is oily. Do you want this man touching things with his oily fingers? No!

tl;dr: A man who lives in his own personal pea soup fog should not be a butler. Also oily fingers. No.

UT knows his strength better than Finny, but again, he’s never been a butler before, and he’s got to basically do the job of at least fifty people to actually keep the household functioning. He’s going to rush, which means there’s a 90% possibility he will use his death scythe to ‘trim’ the garden. Yeah, they’re going to have to turn it into the Japanese zen garden from Chapter 1 because that’s the only thing that will fix it after that.

tl;dr: A man who reaped souls for a living should not be a butler.

Yeah, UT can probably fry an egg better than Bard can. He’s managed to feed himself for around fifty years without assistance (although saying that, we’ve only ever seen him eat biscuits…). However, though he has been a guest at the Phantomhive manor many times, he only knows what a squirrel roast with all the trimmings looks and tastes like. If you told him ‘cook that’, he would probably laugh, and then once he was done say ‘give me a few minutes’, and then come back hours later with some foul atrocity on a plate, at least in part because he gave up on reading the instructions halfway through. R!Ciel would probably lose face just for touching it in the privacy of his own home.

tl;dr: A man whose best culinary accomplishment was probably his own biscuits should not be a butler.

Please Yana, give us Butler Undertaker!! Give us the best laughter~~~~!! 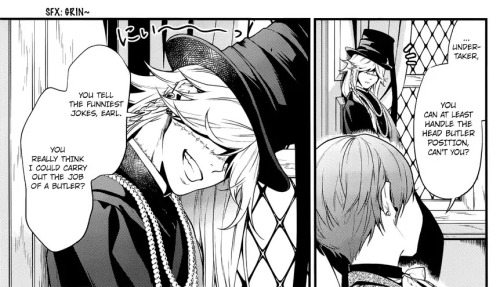 I’m confused. Just searched for a cool pic of Undertaker (the bottom panel of the first image) which I’ve seen a few times before, and ended up finding an entire page from (it seems) chapter 83 of the manga - the original Japanese version, a French and English translation (English translation below).

I’ve never seen this before. It’s not on the online websites, and I don’t have a copy of the volume the chapter appears to verify it properly.

It seems like this panel could be a late addition/replacement for the page below in Chapter 83, the only scene where UT loses it laughing in a similar manner after hearing the P4′s confession.

I might be dumb and have missed something, but it’s one in the morning and I’m confused lol. Does anyone know where the first page is from? It’s interesting to see the different takes and focus on UT’s reaction.

God this happens when I stay at midnight awake with a coffee on hand, please forgive my crazy theories

You’re really worthy of being my son-in-law, Count Ciel Phantomhive

This could be terribly obvious

Undertaker is the death 💀