MINNETONKA, Minn., Jan. 28, 2021 (GLOBE NEWSWIRE) — Vital, a Canon Group company, has been awarded a contract by Radboud University Medical Center of Nijmegen, Netherlands. This announcement was preceded by an extensive, production-ready proof of concept, in which Vital proved to be a reliable partner as it successfully integrated its Vendor Neutral Archive (VNA) solution with Radboud’s existing…

Missing my old setup. Calc 3 is no joke but I’m so glad that chapter is over. Onto the next one but hopefully it won’t be as bad.

my professor: says he doesn’t intend to get into explaining this specific sub-topic at least five times during the lecture

all of us: okay, cool

my professor, one presentation slide later: *explains that specific sub-topic in depth for ten minutes*

#fsjhdhs this is so fUNNY#he was like 'we already talked about the coriolis effect i'm not telling you again' *clicks to next slide* 'so how it works is...'#i understood this effect back in high school already so it isn't even helpful to me rn he's just- mad scientist lad#professor#university#studyblr
0 notes
tlwdotcom
Link
The World Top 10 Agricultural Universities
https://www.tlw.com/news/view-96.html
#university#agricultural university#agriculture#farming#farmers#farmer#agriculture education#agricultural productivity
0 notes
stuckstudy-ing
Text

Today was definitely rough. My quantitative lab TA didn’t go into enough detail on how to perform the calculations so it ate up aloottt of my time today. However, it’s fine. Tomorrow will be better and we’ll start with brand new motivation 💕

Covid has really been hitting people hard, but today, as a University student in her third term, I’d like to talk about schools spesifically

I remember last year in my second term when classes got moved online. I had an anxiety attack week one because I just couldent do it. I just cant do school things while I’m at home - I cant even read for leasure (something I really enjoy doing) at home. Theres too many House things to do at home, that’s why I designated spesific things to do elsewhere. But now I cant leave my house except for work.

My english teacher too, told me of the day it was announced the whole college was going online, that he saw teachers crying in the hallway. If I were teaching that year it would have been me aswell. But instead, I took the 2020 fall term off, picking up more hours at my essential worker job with my terrible boss who somehow hadn’t gotten fired yet. I took the term off, hoping to avoid the chaos of online learning while it was at its worse. But I couldent avoid online school forever, if I skipped a second term in a row i would have to re-enroll; an unnecessary spending of 50$.

This 2021 spring term, I was talking with my counselor about the due date to drop classes; he said the final day to drop without getting marked down for it AND fined for a late fee was feb 17th, a good 3 or 4 weeks after classes start. Great. Except today I got an email saying a 3% late fee would be applied by the first of February.

That was 17 days of class I could have spent figuring out if I had too much on my plate or not. I was already prity confidant I would keep astronomy and psychology, but Spanish Film became a big issue today. The teacher was sick the first 2 days, so today was our first real lecture. Her native language is spanish, and thus she has an accent. An accent I just cant understand (none of which is her fault).

It’s hard enough paying attention to the zoom lectures, but now I dont even know what the teacher is saying? How am I supposed to deal with that. I tell my mom and shes completely unremorsful - saying I should just turn up the volume (I have sensitive ears and would like to actually be able to hear when I’m her age so hard pass - it also genuinely just does not work for me, I did try it) or I should just drop the class. But then I start wondering what if this spanish film is the one class for its UCORE requirement I can actually pass? What if the other options are harder and I make things worse by dropping it? What if - what if - what if -

And I feel myself start to spiral. But I dont - I cant have another anxiety attack over online school. This is only the beginning of the term, I barely made it though the last 4 weeks of last years term. Pull yourself together and just email her

I finally gather enough courage to press send on the email I typed up asking her to see if she can figure out how to add CC to help me pay attention and focus (and also just genuinely know what the fuck she is talking about cause I was so lost today). A few hours after I send that email, she posts the next film and assignment along with graphic scene warnings for the film. I cant even read the warning sentence without almost getting triggered.

At first I thought telling her about it would be out of the question, considering she still hadent responded to my previous email - that would be asking for help twice in one day on 2 different subjects. But as I keep thinking about it, weighing my options, I cant stand it anymore. The warning sentence alone was too triggering - and if I watched the scene I would surely get worse and worse symptoms of my irrational fear. I cant watch that scene. So I email her again telling her as much, asking for an alternate film to watch (as she stated she would do if students needed one) or if I should just try to skip past the scene and watch the rest of the film.

She emails back rather quickly, saying not to worry and I dont have to watch it. But she doesnt say anything about an alternative and still hasnt responded to my other email. I start to worry again. How bad of a student must I be to ask for help/special circumstances on 2 completely different areas of the class to put me on an equal playing field in less that 12 hours. Now I’m that student that’s always asking for special things to help me. What if it turns out I’m lying about needing them and I’m just doing it to be lazy and get out of extensive work? How terrible of a student must I be then?

No. I remember in 8th grade my math teacher told us about 2 students he used to have that raised their hands and asked a lot of questions every day in class, and one day they came up to him and said ‘we must be your worst students, huh’ and he was all 'on the contrary, you are my best students’

They asked questions. They asked for help when they were confused, and they learned a lot more by asking than doing otherwise - I’m sure a few other students learned at least a bit from their questions too.

So no, I am not the worst student for asking for accommodations. I’m a responcible adult who genuinely wants to learn from that class and not fail or need to drop it. I want to be successful. And if that teacher wont help me, it’s not worth taking her class.

So go forth, and ask your teachers questions with the youth of a 6 year old asking random off topic questions just for fun!

Tl;dr you arent the worst student ever for asking for help no matter what kind of help or how much you ask for - it just makes you a better student, and better than the teacher if they refuse to help you :) 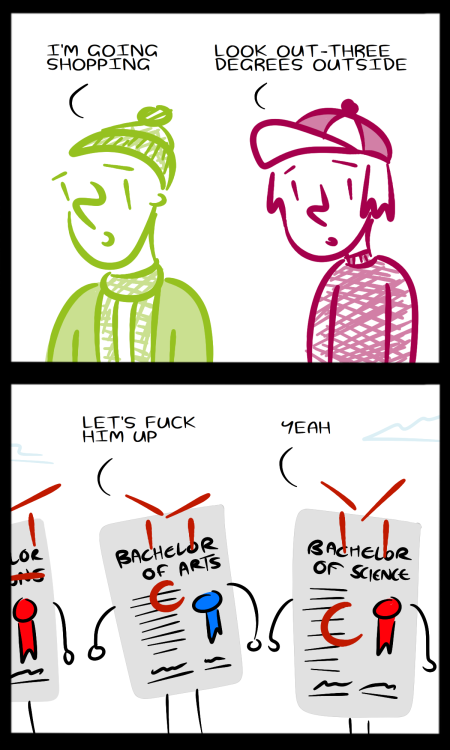 does anyone have any opinions on Savannah College of Art and Design (SCAD University) in Savannah, GA? I’m thinking about going there and want opinions from the people

How do you avoid burnout at the beginning of the semester? I just realized that I’ve been using every ounce of free time to get ahead when I should be taking breaks once in a while, even though there aren’t too many assignments as of yet. I think it’s easy to experience burnout at the beginning of the semester because you have new expectations and standards for yourself, and the new year motivation helps you sustain those standards for a time; however, it’s not sustainable for when assignments start piling up. It’s just something I need to be mindful of.

Today it snowed a little bit while I was working at the student commons! It didn’t stick, but it was oh so lovely to watch.

Have a happy Thursday, everyone. 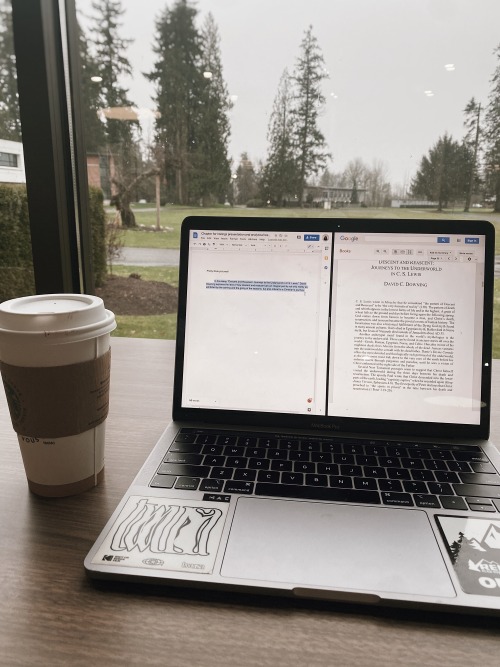 Flag of the Finnish Police flown in the Police University College and other police installations.

Top comment: Showing of course the Sword and Lion symbol of the police. 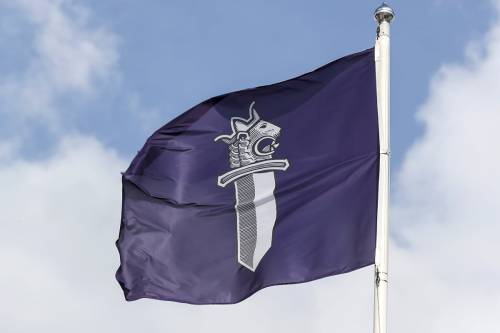 I’m currently an undergraduate student majoring in Psychology and minoring in English Literature/writing. I have three years of experience in copy editing, proofreading, and transcribing. I’ve worked on content such as essays, poems, audio files, and handwritten notes. I’m offering my services to anyone in need.

Not only have I worked in groups I’ve also worked with persons individually to be able to discuss what can be worked on.

The cost of my services will vary due to each person and what you’d like me to do. However, if interested, please feel free to contact me privately and we can go on from there!

Thank you for your time and consideration!

‘Illuminated in your infinite peace,

a billion stars go spinning through the night,

blazing high above your head.’

28/01/2021 - hectic day. did some work with linear algebra, wrote some programs for my programming course but actually struggling with some astrophysics stuff.. enjoy the picture of my cat, Venus.

01.27.21 | Kind of at a lull, which I guess is better than being outright sad. Gotta figure out what to do with myself.

y’all ever have a moment when u know what you want to say, but the

come to ur stupid brain so ur left feeling really stupid?

Halfway through this truly tumultuous journey! I kind of want to study Arabic but I think I’m addicted to starting new languages 😅

i did my laundry and changed my sheets today, my room is still messy but i was productive for 4 hours today so it’s a good day for me !!i changed my phones background and translated a letter of C.G. Jung for my mom and did some arrengements on my dc server, now i’m planning to organise my notion i hope it’ll turn out good ! i still need to tidy my room, study ecology and korean and it’s 3 am here t-t

if i made a youtube/ studytube what kind of content would you like to see? i know im doing a bullet journal set up as well as study with me’s but what else?