Hi everyone, I’m asking for help on the behalf of my sister. Yesterday her baby Cookie was sick and during the night she started having a lot of trouble breathing so my sister rushed to the emergency clinic. She then brought her this morning to her usual vet to do all the tests they told her she needed at the emergency. She’s going to pick her up right now, they said she’s looking better and that the tests didn’t seem worrying. They think her sickness was probably caused by the bad heat wave we’ve been having the past few days. She does have a problem with her colon and will need supplements and another food but they thankfully didn’t seem too worried.

That still does leave my sister with a ton of bills she really can’t afford right now. She left her abusive relationship last summer and was let go of the job she had working for her ex’s stepfather recently. They let her go around the time covid started here but refuse to say it was related to covid so she will not be getting the 2000$/month unemployment. Because life is very weird sometimes, she also just got her positive autism diagnostic  today when she was getting back from the emergency room. Honestly, she really can’t handle a job that isn’t from home (and that is already a really big struggle) but she’s still been sending CVs but not hearing anything back anyway… Even with her old job she was still living in poverty so she has very little savings and had to pay all the bills with credit. So if anyone can help, even if it’s just a little bit, it would be incredibly helpful.

If you can help, her paypal is : Aureliefreistein@hotmail.com

I packed my husband’s lunch! Cracked bulgur with lots of veggies and leftover tahini dill sauce. I love the texture of the crcjes bulgur and it’s so simple to makea

Hello everyone. We wanted to ask our wonderful customers what did they think about this new Purple and Blue Seamoss we have? 💜💙😍 As you can see this video is directly from Zanzibar, where we purchase our SeaMoss in 220lb shipments. This seamoss is very special and unique from one of the many small villages in Africa. We will make this available today for everyone. If this seamoss looks good then drop a 💙💜. We appreciate everyone for helping us continue to grow and supply more seamoss and seamoss products. ThankYou🌱🙏
.
.
.
.
.
.
.
.
.
.
.
#blackseed #seamoss #naturalhealing #soursop #vegan #blackseedoil #seamoss #soursopleaves #seamossgel #soursoptea #veganfood #soursopjuice #veganfit #drsebicellfood #drsebian #seamossandmore #drsebiapproved #veganlife #seamossgold #healthyfood #moringapowder #healing #seamossgang #drsebirecipes #drsebi #veganfoodshare #healthyliving #bladderwrack #seamossbenefits #healthylifestyle #irishmoss
https://www.instagram.com/p/CAvwZqbHukH/?igshid=1x66qgghbn6z0

Part of it certainly is just to sabotage us, but it has to be acknowledged that the vegan movement does have some serious representation issues. Like just about every other social justice movement, the ‘faces’ of veganism are largely white,  despite the demographics being about the same as they are in the general population of the USA in terms of ethnicity, and African American being the fastest growing vegan demographic. That is reflective of representation in society at large, especially on social media, but that makes it no less of a problem that we should be working hard to address.

The ‘image’ of what veganism is has unfortunately been dictated by plant-based dieters, the tag on every social media site is full of white women in particular, yoga, buddha bowls, that sort of thing. It’s why we really need more online activists, or just people openly talking about veganism on their platforms without fear of being unfollowed. As activists we also need to be talking about issues of race as well as animal rights, and we need to be doing all we can to uplift the voices of vegans of colour.

✨ today has been a really “blah” kind of day. I woke up and was planning on going for a run but my legs felt like lead and was just super tired feeling so I opted to go on a walk instead, but even that felt sluggish and ~off~

I picked up a coffee for my walk though which was nice.

✨ then I came home and did my morning solo guided yoga which didn’t feel good to do either. Which is a first bc every morning that yoga is honestly one of my favorite parts of my entire day :(

✨ I made breakfast after that which was tasty though! It was the exact same as the other day, so I just reused the picture lol

✨ then my brother and I watched Scooby Doo (the 2002 movie which is WAYYYY better than any other attempt at Scooby doo movies lol! Ugh my childhood!

✨ then I attempted to do an hour yoga class which, again, sucked 😤

My body just feels so heavy and sluggish today and idk why?! It’s frustrating though.

I’m trying to decide if I want to try another yoga class later on or if I just want to call today a lost cause and skip any other attempts.. bc it’s just annoying right now 🙄

✨ Thea was not having it with yoga this morning either lol

I feel you girl… my thoughts on yoga (and everything apparently) today too.

✨ I actually think I’m going to try and take a nap for a few hours to see if I can sleep off some of the sluggish feelings.

✨ but apart from that, no plans today. Just hbo max watching and chilling today since my body is refusing to cooperate with movement of any kind apparently 😒

I may have mentioned this before, but I have a YouTube channel that I’ve (somewhat) recently uploaded vegan content on, and I’m already making plans for future vegan videos.

There are two main ones right now, both of which are responses to the Penguinz0/Vegan Gains situation:

It’s your wedding - you can serve whatever you want, so long as your partner is happy with it of course. I’d imagine they wouldn’t give a second thought were your positions reversed, so why should you? Besides, vegan food is catering to their needs - it’s catering to everyone’s needs. There are far more people who require vegetarian food for spiritual/moral reasons than those who can only eat animal products for any reason whatsoever.

The police very definitely do still actively infiltrate animal rights activism, we’re still identified as one of the key ‘domestic terrorist threats,’ despite an explicit opposition to harming humans or animals during liberation activities. But infiltration doesn’t take the form of opposition really, I’ve no doubt there are industry propaganda shills at work on every networking sight, but infiltrators pretend to be part of the movement in order to undermine and radicalise it.

The opposition to veganism online is explained much more easily. People hate us because they know full well that the values of animal rights align perfectly with their own, in most cases, but the acceptance of our ideology would require them to reflect on their own moral failings and make personal changes - not an easy thing to do. People much more often react to this with aggression - there is no other reason why there should be such vehement opposition to a movement founded on the principle of causing less harm.

2/ -wlling to pay attention to & stick up for animals, keen to keep things out of sight & out of mind and make those of us who point out those awful & worrying things shut up, but that has given the opportunity to AG to not only inflict severe damage on animals but humans too. No wonder there’s so many huge issues to fix involving AG. And no wonder the biggest most practical personal change we can make in order to save everyone, is to protect our most vulnerable

It’s very true - none of us are free until all of us our free. All oppression is linked, they all share a common hierarchical structure, the insistence that some lives are worth less than others, and that it is okay for the powerless to suffer for the sake of the powerful. Unfortunately, any attempt to actually speak to those who claim to be concerned about oppression, intersectionality and social justice is met by the wailing cries of ‘you can’t compare animals to humans!’ and other such nonsense. That stops any constructive conservation dead in it’s tracks, and prevents us from really achieving any of our shared goals. I’ve already mentioned it’s one of my fave snacks and they have released a new flavour - strawberry. It is so good 😍

Eco therapy in Barbados 🇧🇧 All praise to the Most High for the blessing of nature and natural wonders. 💫🙏🏾❤️ #gingerfortune #gingerbeauty #vegan #naturalbeauty #ecotherapy #caribbeanlove
https://www.instagram.com/p/CAviyzwB3Nk/?igshid=r4sj57k36who

#Carrots have a wealth of antioxidants and offer many #health benefits. Here are the highlights:

1. They’re good for your eyes. This is probably the best-known carrot superpower. They’re rich in beta-carotene, a compound your #body changes into vitamin A, which helps keep your eyes healthy. And beta-carotene helps protect your eyes from the sun and lowers your chances of cataracts and other eye problems. Yellow carrots have lutein, which is also good for your eyes. Studies have found that it can help with or prevent age-related macular degeneration, the leading cause of vision loss in the U.S.

2. They can lower your risk of cancer. Antioxidants have been proven to fight off harmful free radicals in your body, and that can make you less likely to have #cancer. The two main types of antioxidants in carrots are carotenoids and anthocyanins. Carotenoids give carrots their orange and yellow colors, while anthocyanins are responsible for red and purple coloring.

3. They help your heart. First, all those antioxidants are also good for your heart. Second, the potassium in carrots can help keep your blood pressure in check. And third, they have fiber, which can help you stay at a healthy weight and lower your chances of heart disease. 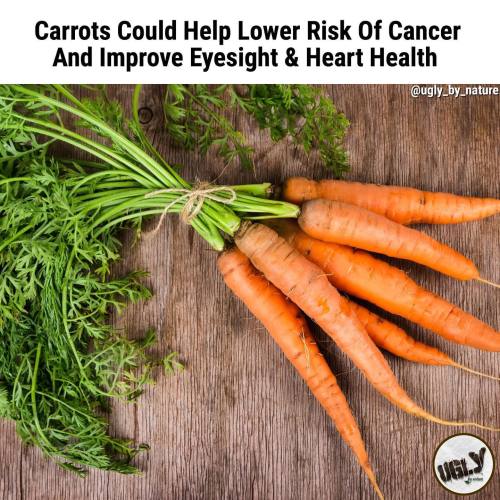