Why are romance languages the way they are?

Im trying to learn how to sing Time to Say Goodbye, and my brain hurts

my mind goes blank as i sit there, absent and still
then i wonder how long since my last fall
am i a pretender? a fake? is this even real?
while the bitter taste of dread fills my lungs
its thick aroma looming around every vessel in my stone cold blood

i begin to recollect experience of the past
once again, i remember how it feels
to wish to not feel, to wish to not be real
to weigh down in bed and sob soundly
wishing happy is what you feel

i am aware of how hard i am trying
but fuck it.
maybe i never will feel it.

idk, kokichi seemed like he had a lot of potential, but they just decided not to use it?? sometimes he lies, but oooh! sometimes he doesn’t. how interesting. i know he’s an ultimate, but he doesn’t have any flaws or weak moments. or any emotional attachment to the other characters. OR an interesting dynamic with any of them. even saiouma, kokichi flirts and shuichi just straight up ignores him. people say komahina is overrated, and yeah, maybe as a ship. but platonically or not, their dynamic is a tough one to top. i get the feeling that kokichi was set up, or could have been, an amazing portrayal on narcisissm. not the “im so amazing” type,  (well maybe a little of that) but more of the feeling of entitlement. the line: “this is MY school. i am the king!” gave me chills. which is really sad, because they didn’t mention anything on that trait. they just overdid a boring portrayal of lies. even if they didn’t want it to be his main thing, at least mentioning it could lead to him being a more interesting character. no one is going to learn more about a character that didn’t appeal to them in the first place.

he’s not a bad character, just, after Nagito…a little bit disappointing. especially since they seem to be given about the same level of importance in the fandom.

also, i hate to say this after i read about it, but the voice acting is great. i don’t condone whatever shit his voice actor has done, but i just thought i have to say that.

I roleplay with a close friend, and when we were younger, two of our characters got together.

His is a fox shapeshifter, mine is a werewolf.

They were our favorite couple, healthy and just ridiculously funny and wholesome.

Even though they were young, they acted like parents to people they took in, and they were content with a life together that consisted of helping others and keeping others safe, sheltering them from persecution.

They took in people who were shunned and hurt by society, gave them a place, and considered them family.

When I was 18, said friend gave me a wolf plush that he had from years ago. There was a fox one from the same company, and they were really practically matching.

That’s our set of plushes.

And I refuse to get rid of the wolf plush he gave me, even though it’s been years.

Every couple in our roleplays did embody something about our friendship.

That couple really did embody how we kinda found each other when we were young and hurting and felt alone. I’ve known him for a decade now, and we’ve had lots of ups and downs, but the thing about him is that when I felt like the entire world was against me, he always offered me a place to go to. And I needed that. He’s never going to see this post, he isn’t on Tumblr, but honestly?

I have him to thank for so so much. He’s why I got so much better at writing. He’s the first person I loved with all of my heart. He showed me my first heartbreak, he helped me find who I am, and when it was bad for both of us and he saw what we were doing to each other by dragging one another down, he cut things off. He only came back later once he’d had time to grow and change and learn. In that time, I’d done the same. I’d had to stop getting angry and hurt seeing his successes, I had to change and learn to not hate him for being happy. I had to get better for him and everyone else I loved, and when he came back, I still wasn’t ready for him, it took another year before I was happy for him.

But once I’d gotten past the hurt and anger of him moving on without me, of him being happy without me, I was able to have my friend again. I had the guy who I wrote with every day for over five years back, the one who doodled on his tests and loved looking at the fish at the pet store. I got back the person that saw me at my lowest and at my highest, the guy that loves animals and would always be looking up new and better methods of caring for them because he wanted them to be the healthiest they could be. I got back the person that used to make me feel whole.

And he doesn’t make me feel that way anymore. The honest truth? I’m glad. He’s still my friend, one of my oldest and dearest ones, but I don’t feel like I did before, and I never want to again. I don’t want to see people outgrow me and be angry and bitter and be hurt by it. I want to be happy. People come and go, that’s one of the painful realities of life. I don’t want to feel a tug in my chest when I see my friends happier with others than they were with me. I want them to find better than me, even if deep down, I still have that selfish part of me that wants to hold on and never let go.

In a way, me keeping that plush is me holding on and not letting go. Most of the people I don’t talk to anymore don’t have anything physical I associate with them, so in a way, I was lucky to have the wolf plush. It’s a part of the person who was my best friend, and it still has part of who he was back then in it. Recently, he got me a new plush, one he and his fiancée gifted me, and this one holds both of them in it. It’s sometimes saddening to look at the wolf and know that part of us isn’t coming back, because there was so much good, but the new plush has new parts, ones with his fiancée, and now I get to keep them both close to me when I have the plush with me. Even if it’s sad to go forward sometimes, it’s necessary.

I have four months until I’m set free into the world to truly fend for myself. I’m hundreds of thousands of dollars in debt, I have no way to get a job because of Covid, I’m not confident in my artistic ability and I feel like I’m a fraud….My mental health has tanked since the beginning of the pandemic, and I feel like nothing’s worth it anymore because I might just die anyway…

I just don’t know what to do with myself. It’s like I’m trapped in a state of such dense, concentrated stress that my body refuses to get up and do anything about it. What am I gonna do when college is over? How am I gonna make money? I can’t stay in my parents house again….

me: Gee i am sleepy, it’s late, better go sleep

me: *has an anxiety attack instead*

I saw something today that reported that Dr. Vauci said there is evidence that the Covid vaccine is less effective on new strains of the virus. So, that’s good. /s

I don’t know how much more of this constant stress and dread I can take. I can physically feel myself wasting away.

Is this how I’m gonna have to live the rest of my life? Is this damn virus going to be around forever now? How am I supposed to get a job if I’m scared of stepping outside because it could literally KILL me?

I don’t have any life plans anymore, I just don’t know what to do with myself. I’m graduating college this spring with no plans and no job…what do I do? What CAN I do?

y’know what’s sort been making me uncomf lately (well it’s always made me a little uncomf but it’s moreso now for gender reasons)? people addressing me as “miss [lastname]”. particularly my teachers. you see, my dad worked at the school i go to and while he doesn’t anymore, basically every teacher in the district knows him (and by extension, me). as a result of this, peoples’ go to nickname for me is miss [lastname], since they know my dad so well and know im his child, and like legit sometimes that is all i get called by a teacher, like they won’t even use my first name. now, i love being called just by my last name (nicknames like that are fun) but it’s the fucking fact that they always put “miss” in front of it… it’s already always felt a little demeaning, like i’m just a little kid, just my father’s daughter. and now especially… on days when im not really feeling Gender? it makes it even more uncomf

#i haven't been feeling too good lately with my art..#i mean why keep going when i recieve nothing from it??#better just stop#vent
1 notes
gypsophiliablossom
Text

emotional detachment is a scam, pass it on 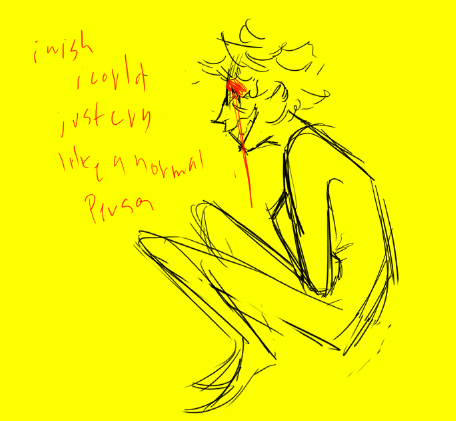 I’m begging people to tag their posts accordingly.. please… I can’t take much more of this..

cant sleep because having weird trauma recollection tonight. blegh… might have to stay up all night and dredge through tomorrow.

it’s just nice to know rico is in the room with me now… i feel so much safer. i just want to watch the sunrise and know it is all real.