Just in Slime - Crash Bandicoot: The Huge Adventure (2002)
Developer: Vicarious Visions
Publisher: Universal Interactive, Konami (for Japan release)
The fifth level of the game’s first warp area, Just in Slime has 134 boxes to break with 47 of those boxes being found in the bonus area. The level features a number of power-ups, including extra lives and the Aku Aku mask that lets the player not take damage after getting hit once. The level also introduces simple enemies like the Rats and Scrubbers that can be defeated by jumping on them or using the spin attack. The level has a Power Crystal and a Clear Gem that can be collected near or at the end of the level. The level can be replayed in time trial mode for 100% completion with time boxes that pause the clock for a number of seconds, with faster times unlocking better relics. A sapphire relic is unlocked for completing the level in under 1:39:40, a gold relic is unlocked for completing the level in under 1:15:60 and a platinum relic is unlocked for completing the level in under 1:06:50. 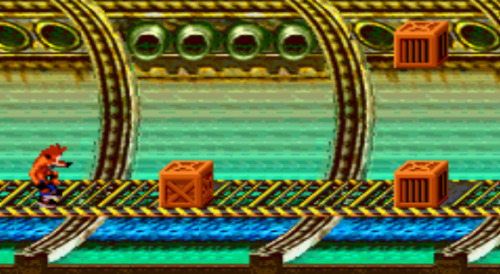 Time to take a closer look at the combat robots of the Aegaeon! As the Leviathans are far too powerful to take head-on, the robots here are focused mainly on ambush, stealth, and hit & run tactics.

As always, names are subject to change.

Hunter: The standard, all-purpose hunting unit. Often wields a multipurpose tool designed to confuse with chemical signals, pierce thick skin with harpoons, and provide logistics support to the other robots in the party.

Trapper: A two-part robot that uses its ‘pad’ to generate certain signals that its prey find attractive. Once in position, the claw-like head will emerge swiftly and dig in.

Minelayer Suite (and Mine): A snake-like robot that must use elecromagnetic waves to suppress its powerful, volatile explosives until they are ready to deploy. Contains a suite of smaller robots to support and inform deployments.

Scale Scraper: A small, agile robot that moves by pumping blob-like head. Is capable of surprising speed, which it uses to latch into its target’s hard chitinous shell. The ‘arms’ are used both to hold it in place and deploy softening chemicals, while the dual drills work at the tough material, and open to provide a channel for material collection.

Killer: A remote-operation unit that consists of the head and 8 independently moving flexible blades. The head contains 360 degree vision and neural disruption protocols, keeping the enemy occupied while the blades sweep and strike their target.

Eviscerator: A hunter variant designed for more stationary combat. In aquatic environments it used its torsion tube to propel itself, although on land it uses it to whip its tentacles around at incredible speed. Previously stationed in places where Leviathans are known to patrol, it now waits patiently until its target gets within striking range, and then uses various tools to swiftly incapacitate them.

I hope you enjoyed the Aegaeon preview! The next race’s preview will be coming soon!

btw its a hairspray reference 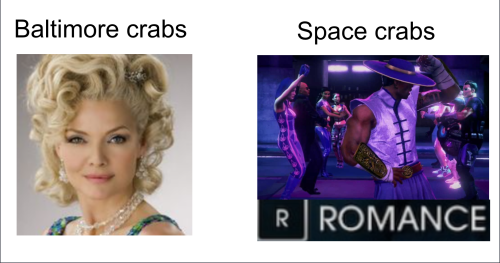 The Sewers - Left 4 Dead (2008)
Developer: Turtle Rock Studios, Valve Corporation
Publisher: Valve Corporation
Found in the first campaign, No Mercy, the sewers are visited in the campaign’s third chapter, The Sewers. The survivors can access the sewers via two sewer grates, one of which is in a generator room visited after leaving a warehouse. Another manhole is in an area connected to the generator room that contains additional supplies. The tunnels are filled with a mixture of common and special infected that can tear apart any unprepared player quickly, so looking for ammo, health kits, and weapons is essential for a group’s survival. One of the most important things for any players to do inside the sewers is to stick together; special infected like the smoker, jockey or hunter can easily ambush and isolate vulnerable players from a large number of small, dark side tunnels. Similarly, the tank or witch can present a challenge for any divided party due to their large health pools and the ability to kill any player quickly. The correct path out of the sewers is well lit, and the exit is at the end of the path, where a ladder will take the survivors back up to the surface and towards the hospital. 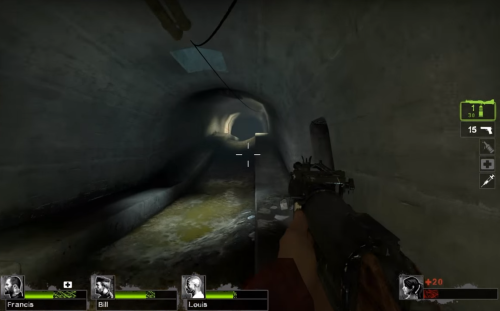