an anatomy study that I turned into nudepool 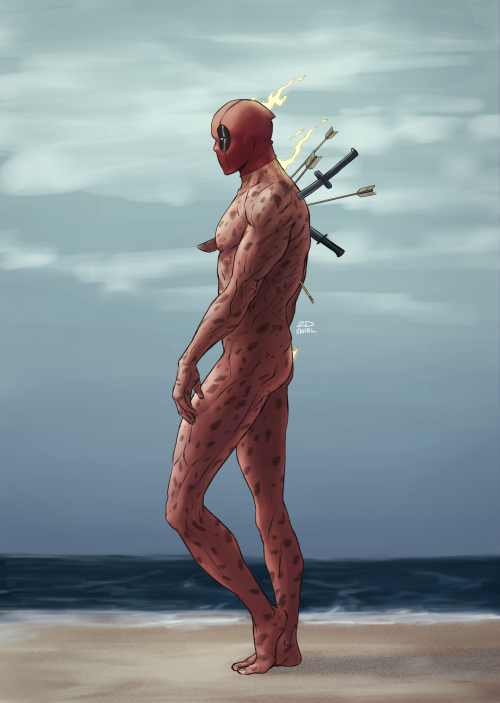 Peter: I heard about a surprise party my friends are planning for me. Should I just pretend I don’t know?

Matt: You should think about your friends’ feelings.

Wade: Surprise them back. Don’t show up. 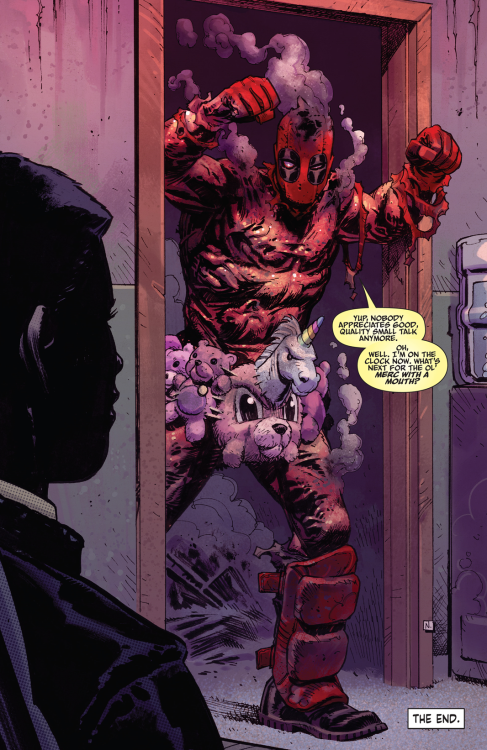 Wade stares at Ray for a few moments, then gives the other a soft headbutt.“ You are too good for me. What the hell did you see in this retard with a mask huh?”

*A Spideypool spin off from Lassos and Lilies. We’ll meet the characters in the background of Stuckony, and then learn their story here!)

Omega!Peter works the whorehouse in the wild town of Wolf Canyon. He likes his boots tall, his skirts short and his Alphas big, bad and brutal. He is no blushing virgin, no sweetly fainting Omega, and when the bounty hunter Alpha on the black stallion comes to town, Peter refuses to shy away from the danger.

Alpha!Wade is less of a bounty hunter and more of a killer for hire. He wears his leather black and spurs silver, a gun on each side and swords crossed behind his back. He takes payment for kills in coin or jewelry, never stays longer than over night, and loves exactly one person in the entire world–

–and when that one person is taken by the Alpha’s enemies, Wade unleashes everything animal about himself to track them down and get his Omega back.

It’s not every day an Alpha meets an Omega who can match him snark for snark, bite for bite, and bullet for bullet, but despite the call of ‘mate’, Wade pushes Peter away for the Omega’s own safety. Peter refuses to leave and instead sets out to prove that he and the volatile Alpha are meant to be together forever.

The Wild West is a dangerous place… but Wade and Peter are a dangerous pair and nothing is going to stand in the way of their Happily Ever After. 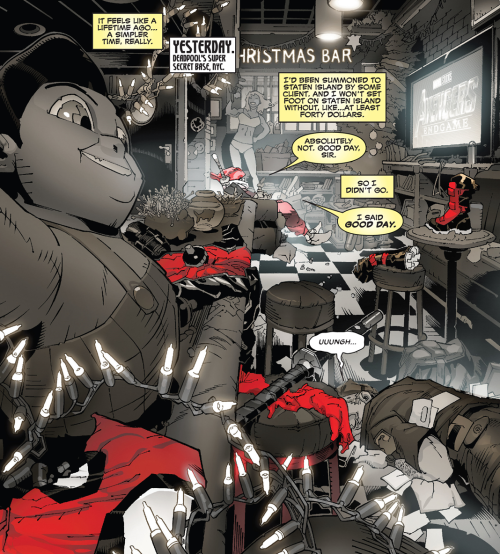 Spideypool (au) || Make You Mine

I finally made a spideypool edit, yay!

Wade: Uh, I made a mistake.

Peter: I can see that. 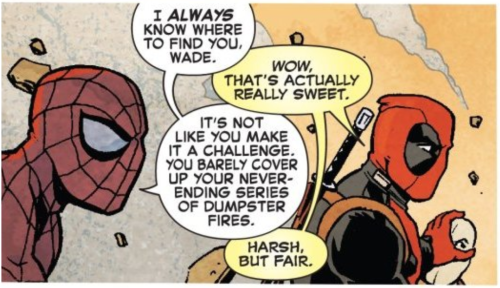 #spider-man, #deadpool, #peter parker, #wade wilson, #marvel, #marvel comics
31 notes · See All
scottishaccentsareawesomeChat
Peter: I'm thinking we should take the first step in moving in together by having the landlord change our address label at the building's front entrance to "P.Parker and W.Wilson"
Wade: No, I can't have my name up there. Everyone I owe money to thinks I live in Seattle.
#incorrect quotes, #spideypool, #original: 2 broke girls, #peter parker, #wade wilson, #mcu
30 notes · See All
mrmerendaPhoto

The famous Norman Rockwell painting from the 1940s called “Freedom From Want” portrays an All-American Thanksgiving, but one might argue that as far as parodies go, this Deadpool version takes the cake! 🍗 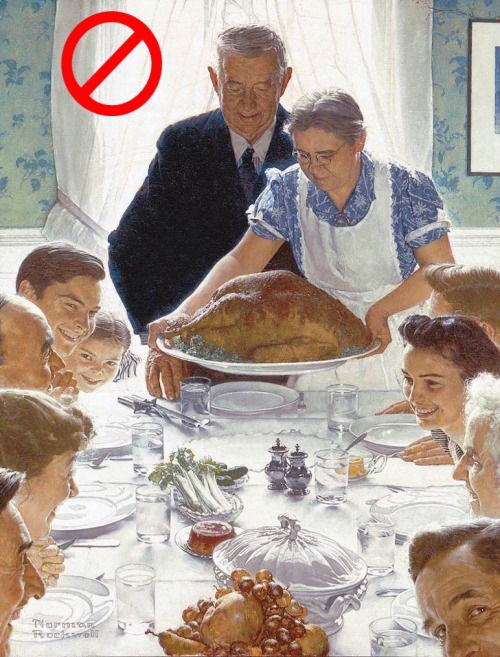 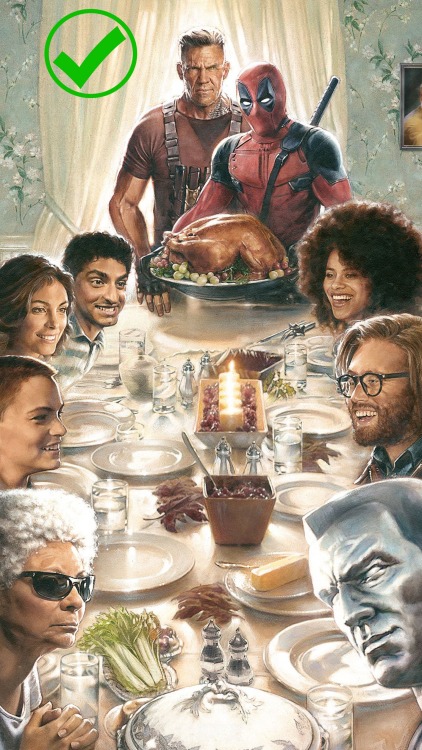 Peter Parker decides to sign up for Midtown School of Science and Technology’s Secret Santa program, and to his surprise, he gets assigned to Wade Wilson, the weird kid who comes in late to homeroom everyday and only talks to Peter. Too bad despite this, he knows nothing about Wade. His identity would get spoiled if he suddenly showed interest, right? Peter decides to get creative.

Surprise I wrote something!  Technically it’s a rewrite of a fic I was in the process of rewriting when I originally published it back in July 2019, but hey it’s something!  Check it out if you want!

I have rules when Deadpool “counts” as proper Queer rep, because while he is Pansexual, I feel he only counts as proper queer rep when written under specific circumstances, given how poorly some writers handle Wade’s queerness.

2. Wade is teaming up with Cable (not Bable). Because I love me some Cablepool.

wade trusts him thats why nate can take off the mask without getting roundhouse kicked in the neck for trying. some hesitation though, sometimes, depends on the day. but he doesnt get kicked in the neck no matter how bad wade is feeling that day so it’s fine. 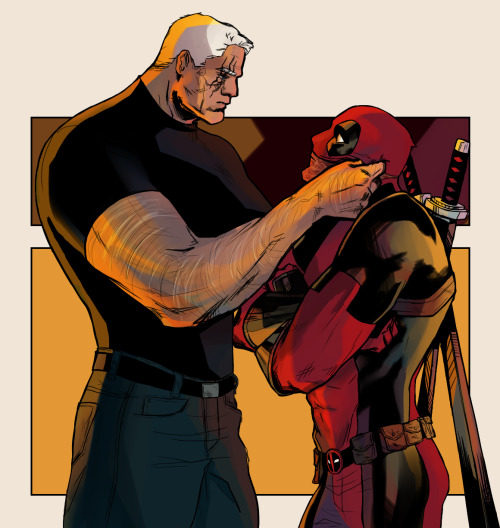