China( the government not the people) has committed biological terrorism by releasing a lab made weapon on the world. The Wohang virus came from a lab. They covered it up. Ordered labs not to test for the virus. Silenced infected doctors. Then, when it was known, KNOWN, that it was transmitted person to person, they sent or allowed over 250, 000 people from the hot zone, into the world! All this comes from their own report. Their words. So it is probably worse then that.

This is a war crime. A true crime against all humanity. Untold deaths, disruptions, and economic impact that will be felt for decades.

This is beyond anything that can ever be thought up by the most talented author. We are living in a Robin Cook, Steven King, and Tom Clancy novel combined.

A Jewish boy gnaws on a scrap of bread in the Warsaw Ghetto, 1941 #wwii, #war crimes
54 notes · See All
calleo-bricriuAnswer
You can't just say something like "probably doesn’t make all that much sense if you didn’t live through it" then NOT EXPLAIN WHAT IT MEANS.

Too much work to pick up a copy of History of Magic that was published after 1945, is it?

Fine. It only mentions it in passing anyway.

As I’d said, Blitzkreig Bop has the line, “Shoot ‘em in the back now”, which has nothing to do with what whoever had heard it and went crying to someone upstairs over thought it did but if you want a lesson in trying to do the impossible, try explaining Muggle song lyrics to someone whose main exposure to Muggles is, “Well, I know they exist…”

The long and short of it is that you can’t.

Apart from the use of large scale area effect weapons–well, weapon singular if you want to call it that, it was really just three different spells, one pretty standard directional modifier charm and two curses chained together and set off. Personally, I consider chained spells a plural and not something new but that’s mostly semantics–most of their executions were carried out on individuals or small groups, typically entire families or very specific groups of prisoners.

The calling card, as it were, of a Zauberreich execution was a very clear indication that they’d been “shot in the back” in a manner of speaking. It wasn’t moving victims after death either, those sent to carry it out would simply wait until their victim’s back was turned or, if time constraints were a factor, order the victim(s) to turn away so that their back(s) were facing the executioner, then (usually) use a killing curse.

If you can get any of the scraps that remain to talk about it they’ll vehemently deny it had its roots in cowardice or being unable to face what they were doing and had its roots firmly dug into the idea that it’s disrespectful to look Death in the face. Allegedly, she doesn’t care for that sort of thing.

Convenient excuse, if you ask me; if you’re unable or unwilling to face what you’re doing, you have no business carrying it out.

Not coincidentally, speed was often a factor, and these sorts of executions were carried out very quickly; they’d be in, done, and gone before anyone knew they’d been there at all. It’s not strictly a Blitzkreig, that’s something entirely and specifically different, but it’s long since become slang to mean little more than a sudden, fast, and overwhelming attack. Zauberreich executions were typically planned out much more thoroughly than an actual Blitzkreig.

It’d be more accurate to call use of die Zerstörung a Bliztkreig tactic.

It’s also inaccurate to state, “To this day, no witch or wizard has been able to replicate the terror wrought by the Zauberreich’s ultimate weapon“ as well.

I’ve been using a shuffled version of it on a significantly smaller scale as a, “You’re going to want to rethink what you’re trying to start here…” warning shot as an opener when someone tries to pick a fight with me since my mid-twenties; when I use it, it’s a warning shot, and I’ve never hit anything apart from grass with it, nor do I believe I’d be capable of it.

German soldiers prepare to execute five Soviet civilians near the town of Velizh in the Smolensk region, Sept 1941. For all the children I knew and loved in Texas who were swallowed up by darkness. You will never be forgotten.

The last Jew in Vinnitsa 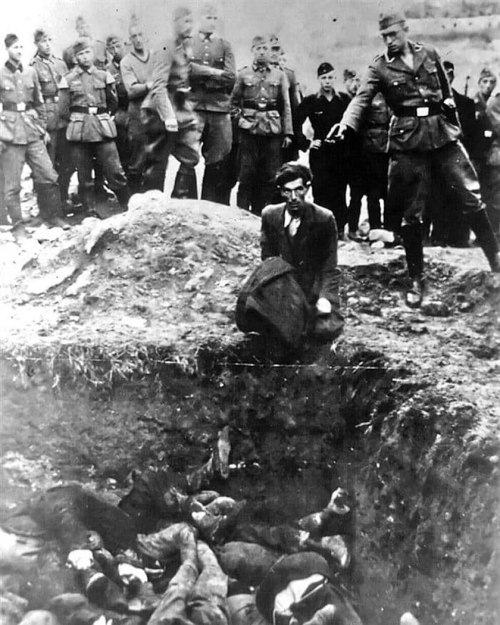 Former Belsen inmates carry a corpse from one of the huts toward a pile of bodies lying in the open. As inmates died in the huts, their bodies were simply thrown out and left in the open. 17 April 1945 The Liberation of Belsen: A British soldier talks to Louis Bonerguer, a British POW who had been prisoner since 1941. 15 April 1945 Dr Fritz Klein, the camp doctor of Belsen extermination camp, stands in a mass grave at Belsen as the Allies put him and his fellow Camp SS to work burying their victims.

Klein, who was born in Austria, was an early member of the Nazi Party and joined the SS in 1943. He worked in Auschwitz-Birkenau for a year from December 1943 where he assisted in the selection of prisoners to be sent to the gas chambers. Klein moved to Belsen in January 1945 and was subsequently convicted of two counts of war crimes and executed in December 1945. It had been the middle of the night when Erik heard a light knock on his front door. He had been hiding out for what seemed like years now, fleeing after he was accused of killing President Kennedy. As if he would have killed one of his own, but people never cared what a mutant’s true intentions were. When he had opened the door, he was surprised to see Alex Summers standing before him, soaking wet from the rain and his military uniform muddy. He certainly hadn’t been expecting to see this boy of all people, a young man who was supposed to be serving in Vietnam after being drafted.

As soon as the door was opened fully, before Erik could even speak, Alex was falling into his arms as though he had been barely holding himself up. Maybe he had been. Erik wrapped his arms tightly around Alex, holding onto him, just trying to keep the boy on both feet. Had things been different, he would have been hesitant to allow such a wet and muddy person to hold onto him, but he couldn’t bring himself to care. A hand was gripping the back of Alex’s neck tightly, cradling his head against his shoulder. The man was practically trembling, obviously riled up from his journey and appearing rather sleep-deprived.

“Please don’t make me go back.” Alex murmured and Erik barely suppressed a laugh at that request. He couldn’t send him back at this point. They wouldn’t just put Alex back in Vietnam where he was supposed to be, he was a deserter now and they weren’t kind to deserters. Even if they took barely adults and threw them into a war they didn’t even agree with, they still found the need to be able to punish leaving by death. No, Erik couldn’t send him back with the risk of any of that happening. So, instead, Erik just held onto Alex a little bit tighter and pressed a kiss to his temple before pulling away from him.

“Come inside, Alex, you’ll catch a cold.” Erik told him instead, urging him towards the warmth of the house. It wasn’t much, but he figured it was better than being out in the cold and rain. He felt a bit like Charles as he considered making tea for the boy and felt more like himself when he considered pouring a couple cups of whiskey for them instead. Either way, Alex was closing the door behind himself and Erik wondered if his life would ever truly be calm again. It seemed like every time he felt settled, something else came up. He also decided that maybe Alex was a welcome turn in his life again. Sikh soldiers captured after the fall of Singapore and executed via being used as target practice, are laid out before a mass grave. “ugh, stars…look'n a little worse for wear there, buddy,” Sans whispered quietly to himself.

I have had this for SUCH a long time. Or, well, a version of it. This scene is from the last chapter of War Crimes I wrote, where Sans checks up on the condition of his soul while taking a shower. The version I had before was horrendous, I won’t even show it, but the other day I redrew it. So here it is. ^^ 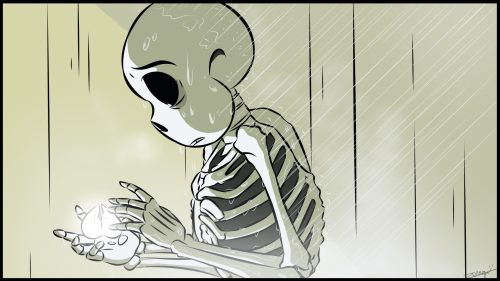 Set him free immediately, too !

Nor must we forget for a second the plight of the refugees on Lesbos, in Moria’s mud and in the other camps, and certainly not that of those in no man’s land between the Turkish and Greek borders, altogether a blatant disgrace to Europe. 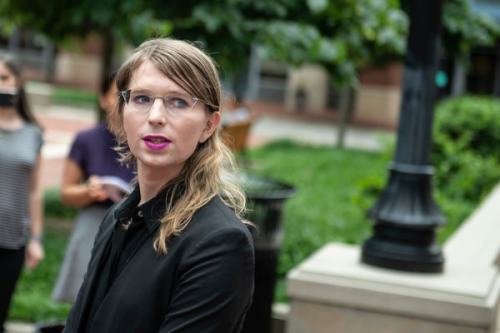 Why is this not taught to American children?

Two weeks ago, the Riesenfeld Center welcomed Professor Fionnuala Ni Aolain’s International Criminal Law class for a resource exploration session that focused on war crimes materials. The students were introduced to our Horace R. Hansen Archival Collection, which includes rich primary source materials related to the Dachau War Crimes Trials, the investigation of war crimes, and Hansen’s career as a JAG in WWII. After a brief overview of both Hansen’s career and the Camp Trails, the class received information packets with leads to digital resources available from other organizations as well as some scans of some of our materials. The students were extremely engaged, and some stayed well after time to ask questions on individual research topics they were considering. 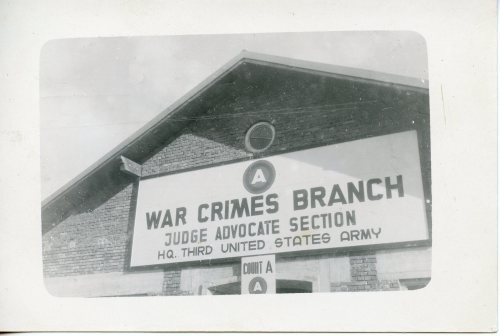 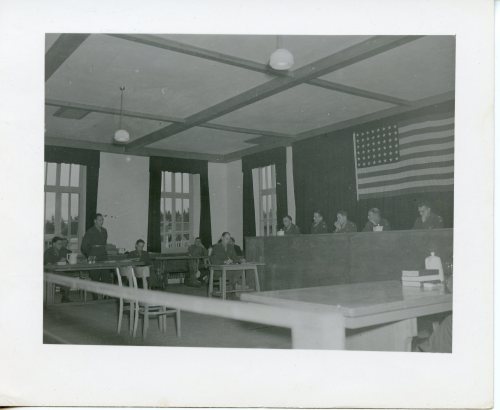 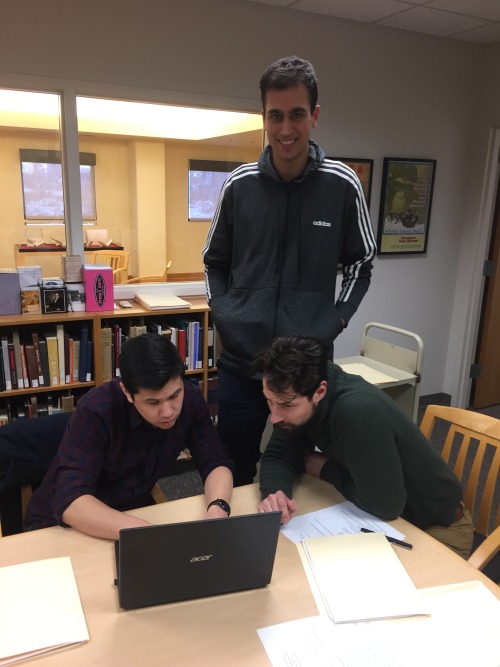 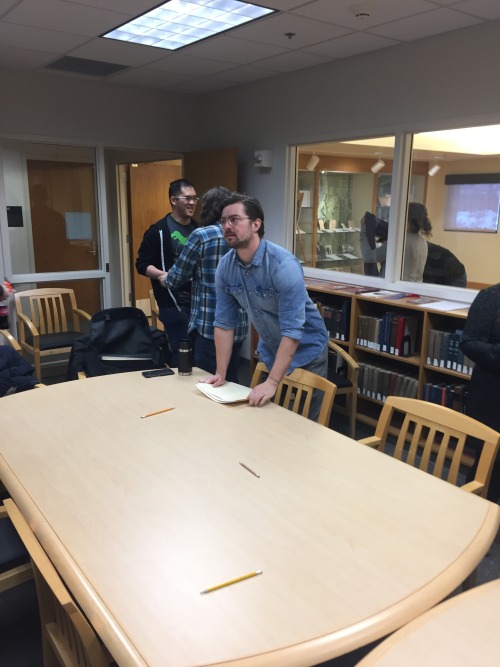 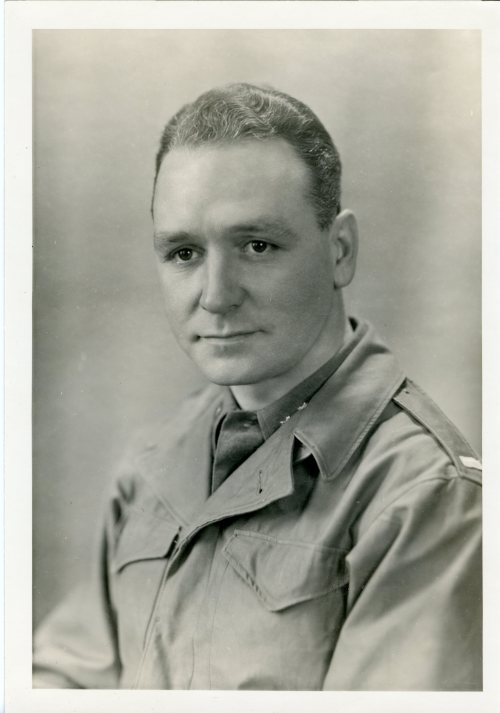