I love Penny: an obvious essay

Such a brave a fierceful woman ;-;

Did I mention that she loves her friends? (Simon. Simon is the friends) (and she’s so smart ;-;)

Hey, look at me! Back to recording after 2 months away haha!

I can’t promise to do this every Friday, but I’ll try. This week is a fic by the darling @otherworldsivelivedin🖤

Summary: I’m a sucker for an Agatha Finding Out Fic™️

Agatha returns from California and Penny may have messed up… hasn’t Simon told Agatha yet? Oops.

166 days until Any Way the Wind Blows

I have a theory and it might be a bit of a sad one.

Simon is often compared to the sun, that’s established canonically. We also know Baz is powerful enough to cast a song (sometimes with help).

If- AND I SAY IF- Simon dies in AWTWB, could Baz bring him back with You Are My Sunshine? Just a thought.

You are my sunshine, my only sunshine /  You make me happy when skies are gray - Simon is the only thing that keeps Baz going.

When I was in that coffin, I pushed myself closer.

I let myself slip away….

Just to stay sane. Just to get through it.

And when I felt myself slipping too far, I held on to the one thing I’m always sure of–

The fact that Simon Snow is the most powerful magician alive. That nothing can hurt him, not even me.

That Simon Snow is alive.

And I’m hopelessly in love with him.

You’ll never know dear, how much I love you - Baz loves Simon so much that he was able to cast an extremely difficult spell.

I wrap my left arm around her, then point my wand at the trapdoor. “On love’s light wings!”

It’s a hard spell and an old spell, and it works only if you understand the Great Vowel Shift of the Sixteenth Century– and if you’re stupidly in love.

Please don’t take my sunshine away - Baz doesn’t want to lose Simon and will never be able to cope with letting him go. Simon means everything to him. (I don’t want to steal all of Rainbow’s beautiful words, so it’s just a snippet of Chapter 60 from Wayward Son:)

I told him it would be all right.

I hope Simon doesn’t die in Any Way the Wind Blows, I was just thinking of this song and my thoughts turned to Carry On.

Feral Baz is so important to me

Another one for @amywaterwings. (Read on AO3)

I never see fan art for the Simon snow series, and it lokey makes me sad because I think it deserves more good fan art.

Not sure if anyone’s started this yet, but I actually drafted this post in advance this time so I’m gonna post it 😂

All fics above the cut are G or T

Things To Remember When Loving Simon Snow by @problematic-mind

You’ve probably seen the associated art for this, which is just as lovely as the fic. It’s in second person which is very, very cool. Just exceptionally soft and thoughtful.

All’s fair in love and war by @vampire-named-gampire​

We all love a Watford-era magic-gone-wrong fic. Especially if it involves Baz getting exposed. This is a very good and fun fic, with cool magic!

Under the Mistletoe by @seducing-a-vampire​

AU where Simon is a mall elf and Baz is his nemesis from uni. It’s so funny. Literally every other line had me ROLLING. An excellent Mordelia, as well.

ugh look it’s a struggle not to rec at least ten of their fics every time I do a thirsty thursday, but I’m TRYING to keep it short so that you actually read one (and then go read all the others because you’re obsessed.) Baz & Simon are trapped in a room. Baz needs blood. Wherever shall he get it?

Detectorists by shushu_yaoi_lj (I can’t figure out your new URL, sorry!)

Simon is one of those metal detector guys. He tries to detect on Baz’s property. It’s funny.

I’m going to tag everyone tagged in this rec list, and everyone who actually bothered to read such a long and rambling post!

**the last fic under the cut is a trans headcanon rated G, but it’s under there so as not to trigger anyone :)**

this fic said simpard rights and I’m so here for it. Basically, Baz walks in on a lot of compromising situations involving his boyfriend and his boyfriend’s best bro. Of course, it’s all a big misunderstanding ;) Go read it!

The Anniversary Effect by star4545

This is a really unique, weird, dark fic. It’s so good and interesting - go read it! (tw for character death and sexual assault)

It’s funny, it’s sexy. There’s character development and tattoos. Each chapter is punchy and makes you want more! The fic is updated frequently and completely written, so don’t be afraid of reading it as a WIP.

A Pint’s A Pound by @stillmadaboutpetra​

um. I don’t know what to say about this. It’s just – the work of a crazed genius. Poetry in fanfiction form. Together, the characterization, writing style, and content create the most incredible and hilarious reading experience you will ever have.

crawl into this space inside your mind by @knitbelove​

Speaking of smart & interesting. (Speaking of writing style that contributes to the overall experience.) Wow, the utter brilliance of this thrall fic is a lot to take in.

Have you ever thought, I want to read a fanfic that is funny, sexy, heartwarming and angsty, all at the same time? Do you just want to see Baz and Simon getting into hijinks as sexy assassins? Then this fic is for you. Fully written and updates regularly. Seriously, this is a masterpiece!

Everything with you by @nevergonnacallmedarling​

this fic said fuckboy rights and I love it. Look, in canon Simon and Baz are virgins w/ a lot of intimacy issues, which is great, but let’s not forget that sleeping around is great too, if that’s your thing. And it makes for a fun and excellent story. Basically, they’re flatmates and friends with benefits who also have a lot of other friends with benefits, because they just can’t get it together. The whole gang is part of this sexually hyperactive incestuous friend group. I’m not sure this will be as funny to people that didn’t know friend groups like this in college, but it was very funny to me.

this last one’s rated G but is a trans headcanon, so it’s under the cut!

boyfriends, boxes and bad coffee (the one where baz and agatha are trans) by catrastiel

A good Baz & Agatha friendship fic with trans Agatha, whom I always love, and Baz figuring out that they might be nonbinary, and it’s just like, awkward and sweet and I love it.

And undead? Nobody wants to be un-anything. 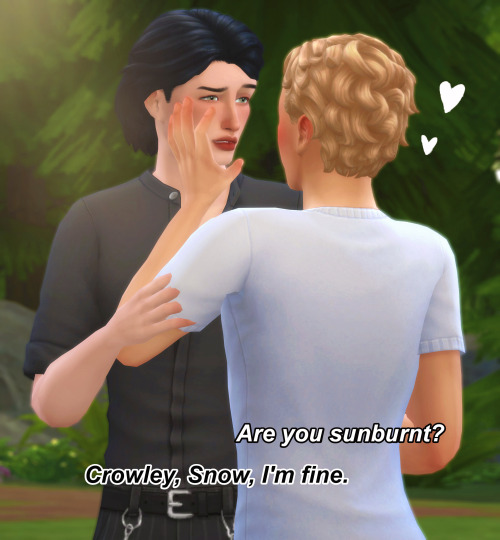 Shepard: Are Baz and Simon having a staring contest?

Penelope: Baz is having a staring contest. Simon’s been zoned out for five minutes and hasn’t remembered to blink.

Agatha, on social media: Ha, look at those idiots exposing magic at a renaissance fair.

Agatha, noticing Simon, Baz, and Penelope: Wait, those are my idiots exposing magic at a renassaince fair!

Simon: The only way Baz is getting out of this relationship is though murder.

Penelope: You mean if someone else kills him?

Simon: The fuck you mean someone else? Only I get to kill him. He’s my boyfriend.

Baz: Simon shut the fuck up or I sear to Crowley I’ll kiss you right here in the Cheesecake Factory parking lot.

no shade to anyone but sometimes it really amazes me how the whole fandom perceives Baz so different from canon.

I feel like you guys just chose like three tropes for him, overused them in fanfiction and now y'all think that’s canon lmao

And I feel like that’s why when WS came out so many people were saying Baz was out of character but no, he was just different from the idea y'all have from fanfiction