#this is a learning process jdfvgjsdbv, #the colours are ... not ideal!, #the untamed, #mdzs, #wei wuxian
4 notes · See All
fckyeahwangxianficrecsText

Note: For the most part, I try to keep things not too explicit on this blog, ie. censoring the F word and whatnot, but there’s really no good way to censor this one, so enjoy!

The fact that XianXian loves spicy food (which is typical Sichuan cuisine, and nice coincidence for the web series that Xiao Zhan is Sichuan) yet also absolutely loves Yanli’s Lotus Pork Rib soup that’s more earthy and calming is so precious.

#i can concur because i love paikut soup lmao tho normally with wintermelon instead of lotus, #and red bean, #lotus wintermelon red bean and rib soup must be god tier, #and yet spicy sichuan food is also god tier but its like you gotta suffer in your stomach for the taste, #wei wuxian, #jiang yanli, #wwx, #jyl, #chen qing ling, #the untamed, #mdzs
2 notes · See All
wuxiansmommyText
#the untamed, #the untamed meme, #lan zhan, #wei wuxian, #wei ying, #lan wangji
1 notes · See All
suibian27Photo

A moment of silence of angry grape uncle

Oh, that’s very cute. And also makes sense, given how close they were!

this week is something a little different. i’m not wanting to post any more breathe au until it’s finished, so instead have some prologue from my wen wwx au that will probably never see the light of day.

anyway, snippet under the cut. enjoy!

#wip wednesday, #the untamed, #cql, #mdzs, #modao zushi, #wei wuxian, #cangse sanren, #i'm not tagging anyone else bc that would be rude
1 notes · See All
yizhanlover-bjyxText

My favorite t4t wangxian headcanon is that Lan Zhan is a trans man and Wei Ying is nonbinary but he comes out after they get together.

Wei Ying grows a lot when he gets to college, meets and befriends more queer people than he ever has before, and learns a lot more that he didn’t even know there was to learn. Somewhere in here he starts dating Lan Zhan and tries drag and starts asking himself, well, what makes me a boy anyway?

He eventually has a conversation with Lan Zhan that starts, “How did you know you were a boy?” except that instead of being invasive he genuinely wants to know because he thinks that the part of him that is a boy might be…missing. Like, he’s been thinking and searching around inside himself and it’s just not there? He’s just been conforming to how everyone sees him and it’s fine but what if…what if something else would make him happier?

So they talk it out and experiment together and eventually Wei Ying comes out as nonbinary, mostly agender, but he has fun with gender presentation (it’s like trying on a bunch of different costumes!). He’s constantly experimenting and having fun and that…that brings him joy.

#wei wuxian, #wangxian, #the untamed, #mdzs, #nb!wwx, #trans!lwj, #yes this is just me projecting my whole gender onto wwx, #try to stop me, #gender euphoria is stored in t4t wangxian, #i think there’s a fic series where wwx figures out he’s nb but i haven’t read it yet, #it’s in my marked for later!!, #this is okay to reblog btw!!!
3 notes · See All
gaywenqingsPhoto

By “A Lot Of” he means two. Yiling Laozu too gay to count. 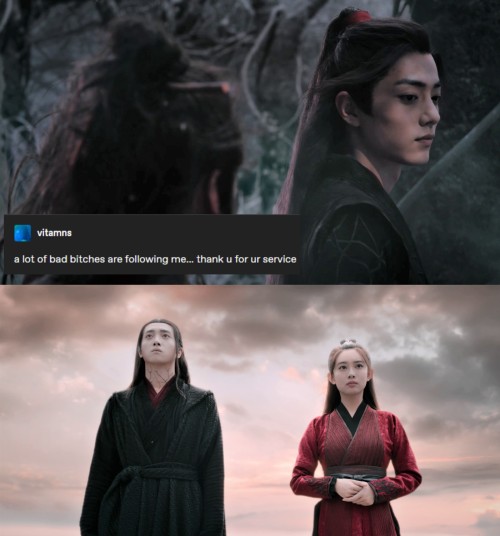 My recent arts 🦢❤️❤️ should have done an art of lan zhan next! wihuhi~ I’m not got at descriptions but I hope you don’t have any plans to repost this art on any sites XDD

Jiang Cheng: don’t fall off the rock you dumbass, I’m too young to witness a murder

Jiang Cheng: get back on the rock, Wei Ying

Mingxian! 2/3 and to like really sell the point that lwj is done he moves out and adopts a dog and wwx then realises that oh lwj hates him so much that he got a dog to keep him away and that hurts and he doesn’t know what to do about it. So he goes to nhs cause while the kid acts useless he’s actually very nice when it comes to comforting so they go out drinking and wwx crashes at nhs’s place where he’s living with nmj. But nothing really happens cause wwx still loves lwj

Mingxian! ¾ lmao I am a fool. But like a few months pass and wwx starts moving on and realises that maybe it really isn’t healthy to date someone who doesn’t trust to to not cheat. Nmj knows wwx is single and has had a far off crush on him so he shoots his shot. He brings wwx coffee, takes him out, they go on mini dates until wwx realises that oh he really likes nmj. So he asks nmj out in a small but sweet way and nmj obviously says yes. Fast forward like 8 months and wwx hasn’t seen lwj

Mingxian! 4/4 he hasn’t seen lwj since then and he’s so happy cause nmj proposed a week ago and they’re setting up plans for a beach wedding next year and he’s truly moved on but then lwj shows up and asks to take wwx back but wwx refuses because he’s happy now and he and nmj love each other and maybe it’s time for both of them to move on. Lwj is definitely upset but they get closure but for more angst lwj never falls out of love and suffers watching wwx and nmj be happy together

#lack of reply, #We are given the treat of a rarepair today lol, #wei wuxian, #nie mingjue, #lan wangji, #unrequited love, #mdzs
33 notes · See All
articwolfclawartistText