Tumblr just suggested I follow @we-are-occultist, but I didn’t see them get introduced, so belated welcome!

#Welcome!, #Sorry for the delay
3 notes · See All
chaoshqsText

MACKENZIE!!!! did you hit that huge pothole on the drive in? yeah, we’ve been meaning to fix that, but god knows it’ll probably never happen. make sure you collect your keys in 12 HOURS at the town hall, and get pumped for your welcome package!they always throw the best odds n ends from joe’s in there. SYDNEY CARLSON is now taken.

Great! Besides me burning our arm-

It’s been a while since he’d last napped, and he probably wouldn’t have remembered even falling asleep when he’d wake up later. A pen was still in his hand, still, half writing a letter. At least his head was resting on the table this time rather than poised and propped onto the palm of his hand with his elbow on the table. It would be troublesome if someone were to believe he were still awake and had relayed important information, work, or a certain doctor coming to visit.

—or it was until someone came bursting in.

It was difficult for anyone to stay asleep with all that noise. Batting away sleep, he began to stir. He didn’t move from his (un)comfortable position against the cool desk, but he was trying to figure out why everything was dark. Oh, right. He pushed himself up and sat properly in his seat, his eyes narrowing as he stared in the direction of the voice. The familiar tone matched with a familiar face.

“FEater.” She looked awfully relaxed on his couch. Her voice might have been loud enough to wake him, but he hadn’t listened. If it wasn’t for the clock (where was that thing anyways?), he wouldn’t know what time it was either. Not with the lack of natural sunlight in this room. “Is there something you need?”

I’ve gotten to the point where on nights like tonight where I’m feeling really social, I check to see how many followers I’ve lost…

But also welcome! x’D I don’t mean that to sound ungrateful I’m just… shocked. Usually on my social nights, I lose followers, not gain them.

So to those of you that followed me tonight: welcome to my blog!

I have several pages, so feel free to check those out if you wanna learn more about my characters or writing! I still need to make a WIP page but I make new WIPs so often………

Anyway! Welcome! Thank you for following! I have NO IDEA why on earth you’d do that but thank you anyway! x’D

Welcome to the following people:

Let me know if there’s anything you wanna know or that I can do for you! Here, have a brownie!

#random post, #welcome!, #new followers, #daaaamn man, #I was not expecting this AT ALL
14 notes · See All
wooshofficialAnswer
'TIS I, CAPS LOCK ANON. WE HAVE NEVER MET BUT HELLO, KIND SOUL.

Hello! Welcome to the anon party!

The night was cold and lit by the dim brightness of the moon. It was a good night to go back. She had promised her family that she would be in Athens as soon as possible, hence the decision.

Everything was ready, as she stepped out of the perimetre of the Temple and into the ruins. She was about to go, when she heard a noise, someone stepping by. She caught the presence of a Cosmo. It did not look like anything hostile.

“Hello? Is there anyone out there?”

#Hi, #welcome!, #I hope this is ok!, #please let me know if you have questions
5 notes · See All
backfortyfliersLink
Welcome!https://www.youtube.com/watch?v=87hY-jGl85w&utm_medium=social&utm_campaign=postplanner&utm_source=facebook.com

Welcome to The Back Forty!
https://www.youtube.com/watch?v=87hY-jGl85w

#The Back Forty, #Welcome!
0 notes · See All
spnregencybbText

Hello to everyone who would be interested in participating in the Supernatural Regency Big Bang! Over the next week or so, we’re going to start focusing on the structure of the bang, so we can bring that information to you, however, we have a question for those interested.

What do you want to get out of the Bang? Send us Asks, Message us, or Even Comment on the post. This Bang is for you, and we want to know what you do or even don’t like about other Bangs. (No hating on other bangs, please!)

༉‧₊˚✧ welcome to camp hawthorne VIVIENNE ! you’ll be staying in CABIN 4 respectively. you have exactly six hours to locate your cabin or we’ll have to assign it to someone else. [ camila morrone is now taken ]

#twitter rp, #appless rp, #camp rp, #horror rp, #welcome!
0 notes · See All
okayjoonieAnswer
I know i have a size kink. I want someone to make me suck their fingers, choke me, and even spank me. Girl or boy, doesn't matter. Will you be the one to satisfy my needs? Also can i be "💔" anon?

all of those kinks are valid and I support btw, also I relate oop

And of course you can!

Hello and welcome to my loch!

I decided to also make a tumblr for me to spam my tanks!

#first post, #welcome!, #if you follow me you are now a monster!, #a loch monster!
0 notes · See All
cook-n-tellText

I’ve recently received an influx of new followers! Hello and welcome! Thank you for the follow!

I’d like to take this moment to say that my askbox is always open if you’re after a recipe or have a substitution question, or not sure what to make for dinner! My submission box is also open if you’d like to share your favourite recipes, you are more than welcome.

I also have a mini series of posts that I call the “How To Basic.” If anyone has any recommendations as to what essential cooking guidelines I should do next, leave a comment or let me know in an ask or reblog!

#update, #mine, #welcome!, #also please leave your vegan discourse at the door it’s not welcome here, #i tag vegan if its vegan friendly or has a vegan variation, #i wrote this at 2am please forgive me for spelling & grammar mistakes
3 notes · See All
jollycooperationbrothersText

Do we have many new undead here? (new to SoulsBorne games)

I’ve been given time off from work and decided to put my productivity elsewhere; which is here with the community. I know I have expressed my feelings about the game and being here in general but even in isolation, creativity still strives. Stay tune.

The beans are here!!!

youre probably taller than me anyway

“welcome to the library!! Wonderful to see a new face!”

Ooc: Welcome to the blog! Super happy to have you here! 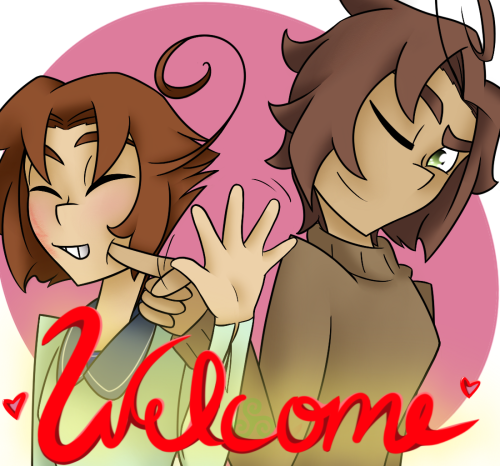 “Ivo, babe? You want me to start up the blog on my own or do you want to actually pay attention to it?”

“Robotnik, Etta. Call me Robotnik on this blog.”