Trending Blogs
#why? ...your guess is as good as mine
yeetyootText

Just general mentions of being injured.

#is this because I constantly fall down the stairs? Maybe, #obey me!, #obey me headcanons, #obey me lucifer, #obey me mammon, #obey me leviathan, #obey me satan, #obey me asmodeus, #obey me beelzebub, #obey me belphegor, #one day I'll stop falling so often, #not today but someday, #maybe I’ll do an undatables version of this later, #as usual it's like 2 in the morning, #Why do I only write when I should be asleep? Your guess is as good as mine
57 notes · See All
misscrazyfangirl321Text

Her parents would be furious if they knew. Then again, she has no intentions of picking up the phone and calling them. Hank’s life is in danger, and she’s suddenly all too aware of how little she won’t do to save him. Normally she’d turn to Nick (or maybe even Trubel, though the girl still terrifies her a little) for this, but they both have emergencies of their own; neither one even picks up when she calls, and she knows this is up to her.

Technically, she knows it isn’t clothes that will make or break this, but she has a feeling it’ll help her with confidence, so she heads to the nearest thrift store.

The only combat boots they have are a size too large, so she buys some thick socks to go along with them. She debates for awhile between the dark jeans and the ripped ones, before finally grabbing the first; she can put a few rips in them herself. The shirt is less of a concern-she’ll stick to something in her closet, honestly-but the key is the jacket.

Thankfully, they have half a dozen leather jackets, in varying shades and sizes. She grabs a dark one decorated with metal links and spikes, and as a bonus, snags a pair of tight black gloves.

One more thing she needs: shades.

For a split-second, when she steps out of the car, she forgets to breathe altogether. This is a dangerous bluff, after all, and if she gets caught, she and Hank both might die. Then, she forces the thought from her head. It’s not a bluff, she tells herself, trying to coax herself into the right mindset. It’s true. And I’m very angry. And I’m going to go get my husband back.

She doesn’t bother knocking, just marches up to the front door and flings it open. It vaguely resembles an office, and two men sit at desks, typing away at computers. They look up at her warily, and one frowns.

“I’m sorry, but we don’t admit anyone without an appointment.”

“No?” She strides up to the desk, and the men lean back slightly. With a quick sniff, she realizes they’re Reinigans. Perfect. “Where’s Hank Griffin? I’m not going to ask you twice,” she adds sharply, when one hesitates.

The one who spoke to her before clears his throat. “Wh-who are you?”

She smiles, and it takes everything in her not to woge, to show her teeth. “Ever hear of a Grimm?”

(They take her right to Hank. He looks up at her blearily, the dork, and grins. “I like the outfit.”

#oc-tober, #nadine griffin, #hank griffin, #6it, #my fics, #grimm, #my writing, #my works, #mine, #when does this fit in chronologically? your guess is as good as mine. they're remarried again so there's that., #why can she not just be a scary bear wesen? why does she have to be a grimm? who knows?, #why was hank kidnapped? w h o k n o w s ?, #i just want someone to pretend to be a grimm by acting scary and wearing sunglasses okay?, #and i want nadine to fiercely protect her husband, #and also have the internal struggle of o gosh i'm pretending to be a grimm
3 notes · See All
pup-princeText

#why do i keep getting overwhelmed today, #lets play a game called is it my autisism my hormones or my mental problems or just my genuine emotions, #your guess is just as good as mine
1 notes · See All
gender-euphowryaText

#idk i thought i'd at least tolerate archer because i liked bojack horseman but God these shows are Different, #like people in a bh facebook group i'm in were all like oh archer is also a good show if you liked bojack but, #i guess what they mean is Hey are you a white man who strongly relates to rick sanchez well listen, #like oh bojack is an alcoholic male jerk This was obviously the selling point so you'll love all shows with an alcoholic male jerk, #i also started watching glow ? real talk does it ever like... get good, #i don't hate it but it's kinda boring i expected it to be funny but it's kinda just, #serious shmerious OH A JOKE back to serious gritty ASS serious again, #like it has a very dull tone overall and i can't tell what it's trying to be, #it feels like it takes itself way too seriously given the concept of the show like, #people in what the 80s? trying to put together a female wrestling show, #all these different girls coming together becoming wrestlers like it has SUCH potential for high comedy, #but it kinda does nothing with it, #it's a gold mine of absurd that doesn't actually deliver it's like if, #if someone made an epic completely down to earth action-filled retelling of fucking monty python's life of brian, #it's like you step into a clown car and the inside of it just looks 100% like your dad's suv complete with a pine tree air freshener, #but yeah archer has a fucking ugly animation  style and yeah i knew before i started it but ugh there's 10 seasons of this shit???, #it looks like realistic go animate, #like i get that as a... comedy? show its animation isn't the focus at all but Come On, #bojack horseman nailed the whole not-focused-on-realism simplistic animation, #why can't archer look better than if ctrl+alt+del was made by marvel
0 notes · See All
smoskvaText

i always think that the anglos can’t horrify me more that they already do, but then every single day, they do

#i just saw reasons why moving into a national park is a good career choice, #as in, #your job is living in a national park, #girl WHAT, #fuck the locals i guess, #its not like the people who are actually from national parks literally can't work on their own land or update their 100 year old houses, #because of c o n s e r v a t i o n, #but sure lets invite some english people, #its not like they ever fucked smth up, #lets make national parks turistic places, #and charge the entry, #the english can pay it, #but lets also make the people whose land it is pay, #that literally happened to me, #for entering land that's literally mine
2 notes · See All
transrobinsChat
Lois: This is my husband, Clark Kent
Lex: Well, you certainly traded down after Superman
Clark, internally: >:O
#lois lane, #clark kent, #lex luthor, #superman, #dc, #why are these three making small talk? your guess is as good as mine, #incorrect quotes
80 notes · See All
lonelyheartedheathensText

Open to M/F/NB(Bottoms/Verse for M)
Potential Relations: Partner/Assisstant(can also be SO or incest/stepcest), Parent/Older sibling of party guest, etc.
[ BIO ]

“This is a really bad idea,” Thor breathed, despite the small grin on his lips, as the other got the buttons of his collar undone, loosening the doublet of his Prince Charming costume. He’d already done his little meet-and-greet with the children at this birthday party. The birthday girl had been over the moon when he’d presented her with a rose and danced with her. Now the children were sufficiently distracted eating cake and opening presents, most of the parents there paying attention to them as well.

He’d excused himself and ducked in to the bathroom. It hadn’t been long before the other had slipped in with him and crowded him against the counter as they kissed him. Oh, if they got caught this would be bad. That didn’t stop him form drawing the other into another kiss, his hands finding their way beneath their shirt as he spun them around to have the other pressed up against the counter instead. “Pretty sure people will notice if we’re gone for too long.” 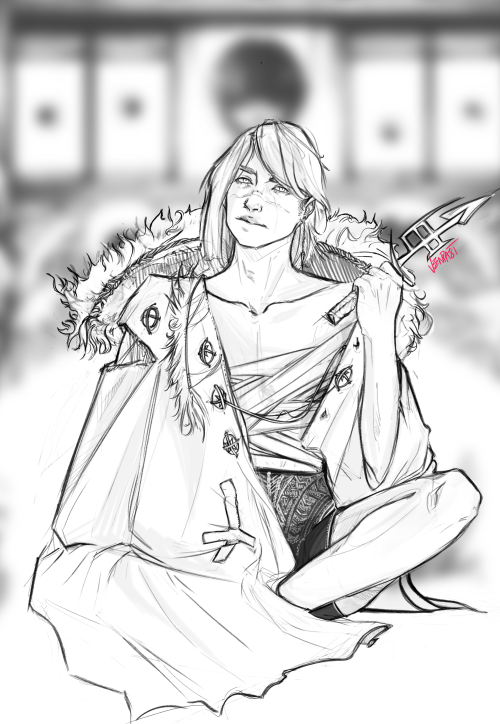 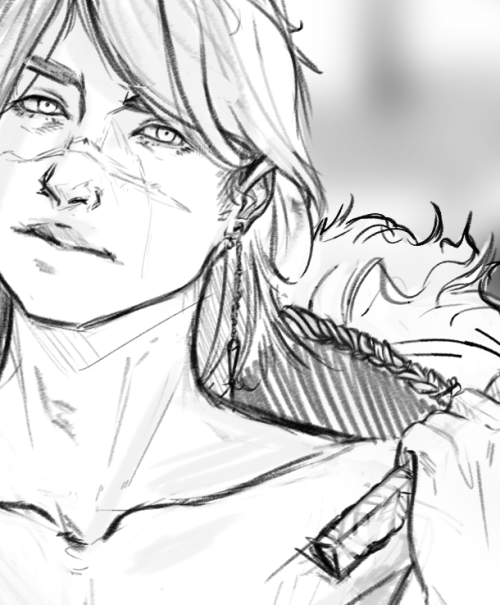 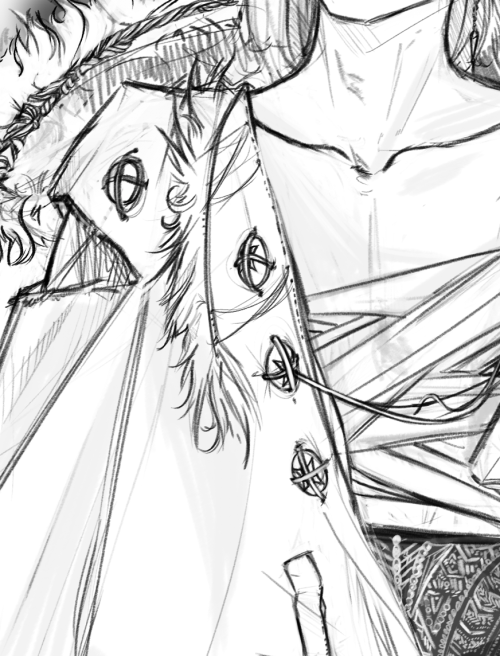 #kurapika, #kuroro lucilfer, #kurokura, #hunter x hunter, #hxh, #succession arc, #chrollo got what he deserved i.e. being put in the ground by a total 10, #why is he in his underwear? your guess is as good as mine, #ven art
71 notes · See All
petracore101Text

#blake belladonna, #RWBY, #petrart, #bumbleby, #but like lowkey, #she’s Yang’s favorite mechanic, #of course Yang doesn’t *need* a mechanic, #she keeps her bike in tip top shape, #but she goes all the time anyway, #why? ...your guess is as good as mine, #mechanic!blake, #RWBY fanart, #hello sapphics I hope you’re all having a fantastic day :))), #those shirts gave me THOUGHTS ok?
246 notes · See All
Next Page