I don’t know who that is, but “Dudley” sounds like “duck” sooooo

He can be a plumed whistling-duck Avem!

(Info Dump not so anon) Hello! I hope you’re having a good day so far! I had a couple different ideas and fun facts that I wanted to share with you and I couldn’t figure out how to fit them all in a few asks so! Hi! Full warning this is probably gonna be long and sorta a grab bag of ideas. Anyways! First fun fact that I wanted to share, purring in cats is less akin to a straight up “I love you” and more akin to a “please don’t leave” which is why they purr when they’re scared or happy, in either situation they don’t wanna be alone, for different reasons though of course, but I remembered that fact when I was scrolling through the Beta!au and was immediately gut punched by the possibilities that presented when applied to witches purring so I thought I’d share! Also adds another layer to the whole amity purring to calm herself down thing, no matter what au you’re in. Second idea! It’s for the Wing!au! So you’ve mentioned both wing hugs and wing burritos in the past, which got me thinking about other ways to cuddle or show affection with wings, which led me to the fact that Luz would absolutely try and do the fake stretch to wrap an arm around someone except, with Wings! Also, you Know that the dive bomb technique is absolutely also used for cuddle sneak attacks, because, Cuddles! Third idea! I imagine at one point in the four years au after everything has gone down, someone references the whole Necessary Needles event as a “haha lookin back on it now that was pretty tame” sorta thing when Camila is around, and, I’m just imagining her reaction to that. Anyways! I’m gonna cap it off here so it doesn’t get too long! But! Next time I’m back I won’t be on anon! I have put the anon hat aside, although I did really love the name you gave me! It is pretty accurate!

WELCOME TO THE SPOTLIGHT MY FRIEND!

Bro you bring up the Arm Around The Shoulders wing trick n I’m. yes. she absolutely would. Luz has literally sneaked a wing around Amity to pull her into a sort of half-hug while talking, or just to draw her closer like how you grab someone’s hand and pull them closer to you. She’s done this plenty of times before with no problems but when she’s actually trying to flirt? Lord its a mess. She’s not subtle at all n her wings just. Can’t sit still.

“lmao remember when Luz got high on witch drugs?”
“she WHAT”
Course people like Ed and Em casually bring up how they heart Luz cracked her head open, didn’t eat for three days, passed out while walking, all that bad stuff. Course Luz assured her it was only for a little while, but you can imagine her distress.

Soooo this is my first work for @uchihashisuiweek I hope you like it. 🤗

I suck at drawing wings but this man deserved a good pair of them since he was an angel.

I thought in a wing au where Uchihas main capabilities are not only on their eyes but also in their majestic wings.
Shisui’s ones are a mix between falcon (the fastest bird) and crow (for obvious reason and also one of the smartest birds) wings.
I modified his swordbelt a little so he could use it and won’t bother his wings.
The anklets are used on birds to identify them, so I think there would be a good place to engrave the village symbol in this au.
Bells are used in falconry (along with telemetry system) to know the location of the falcon if this fly too far away from sight. I thought in this au, since Uchiha are concidered dangerous, are obligued to use them, but in Shisui’s case, since he is faster than sound, it doesn’t put him on disadvantage in a fight. 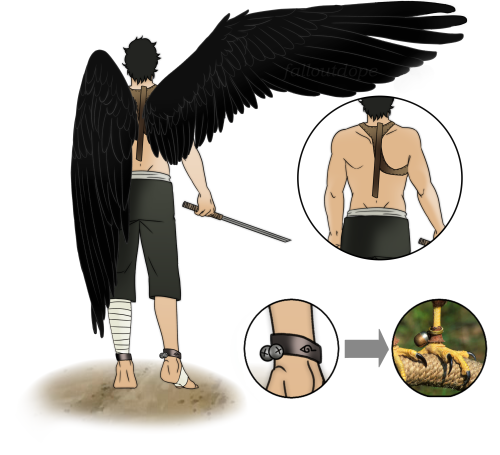 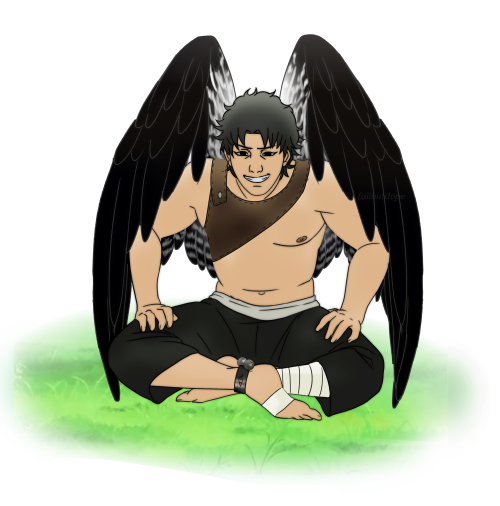 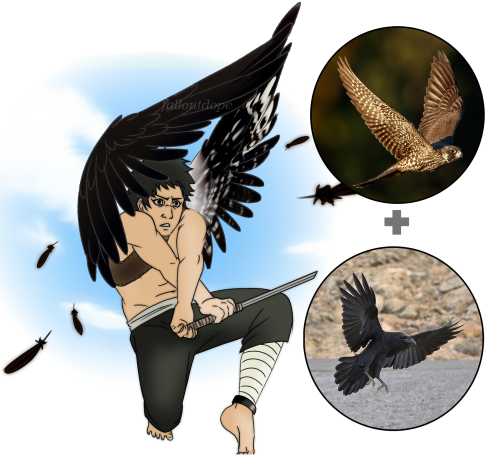 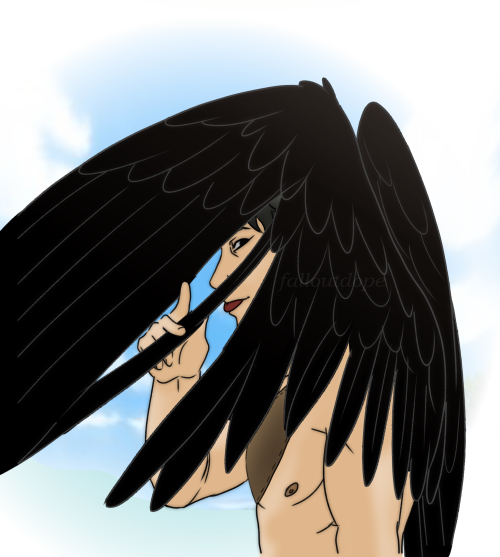 Despite male birds being the most colorful, any gender of Avems can have vibrant colors. Hens can be the vibrant blue of a peacock with the lustrous tail to go with it, aves can be the popping red of a cardinal, and roosters can be the dull brown of a red-winged blackbird. In fact, hens tend to be more brightly colored than all genders, and this helps attract a partner since homosexuality is a big thing in the avian world.

They’re small and narrow, but the insides are completely skin like on a bat. So, without those added flight feathers, she struggles to fly for long periods of time.

It also takes a lot of energy to work her wings. Hummingbirds flap their wings much faster than other birds, so they have to eat a lot. That goes the same for Joan. She’s supposed to eat almost half of her body weight every day to keep up energy (she’ll burn off those calories with ease), but she doesn’t eat very often. So she’s left very weak and sluggish.

To say Danny had been a bit tired after his parents giving him a full check over would be an understatement. They literally wanted to see every single little way his wings could move and how each and every muscle reacted to said movement. If he had any reflexes; which hint, he totally did. Hitting the bends of his wings in the right spots would cause them to kick out just like a knee. And he had a spot on his back that would make his feathers fluff out. After all that he just didn’t want his wings messed with anymore, oh and to sleep, thank you very much. Which his folks were perfectly content to let him do on the couch. Which promptly led to the personal discovery that wings were freaking awesome blankets.

Oh, my bad! They’re curved back over her head!

Not naturally. Only frost or fire, or both in rare cases. The only way they could is if they under magic to enchant themselves to have that ability.

[for a #WingsOfJimin collab via ig] 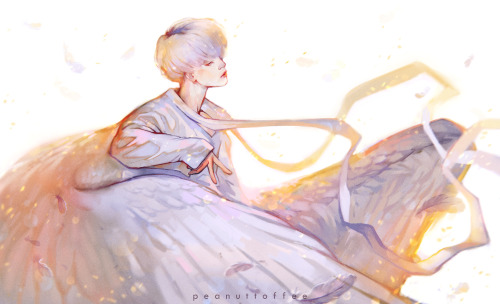 As the sides singular braincell, Logan’s wings are based off the Grey Parrot, one of the world’s smartest birds. The more rectangular and boxy shape of his wings combined with the monochrome colour scheme lend well to his serious nature. They are also very broad and powerful, and he is very careful to avoid knocking things over with his wings.

#art, #sanders sides, #tss, #logan sanders, #wing au, #old art, #grey parrots actually have red tails, #i doubt he would've liked that too much, #luckily they don't have tails in this au, #serious boi is serious
392 notes · See All
gingermaplePhoto

The heart of the group, his wings are based on the blue Lovebird! Their smaller and daintier wings, with their soft blues and greys, are befitting of his kind and gentle demeanour. He loves to give hugs with his wings, and is also very expressive with them, fluttering them when he’s happy and poofing them out when he’s scared or surprised. 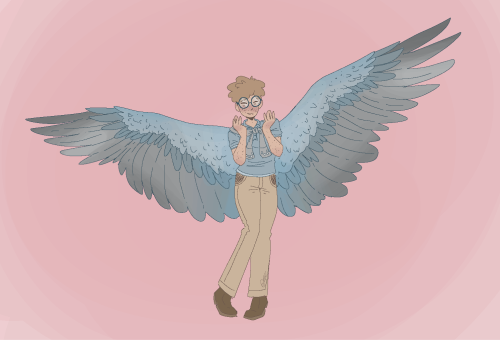 Was gonna say she just a sparrow but then I thought abt it,,,,,,sandhill crane. Alters her design slightly by making her hair darker with hints of red but other than that she normal. Her wings have flecks of pale and dark that Luz likely gets her freckles from. Though her father was a sparrow.
Also like,,,,cranes symbolize healing so of course I Had To

His wings are unique from all the other sides in that they seem to be a fusion of the more feathered wings of the ‘Lights’ and the leathery of the ‘Darks’. This occurred because of the split. When there was only one Creativity he was considered a ‘Light’, but upon splitting Remus was immediately reassigned to ‘Dark’. This unnatural change caused his wings to appear the way they do.
Although this image isn’t coloured, the feathered part of his wings are based off the Plumbeous Kite. 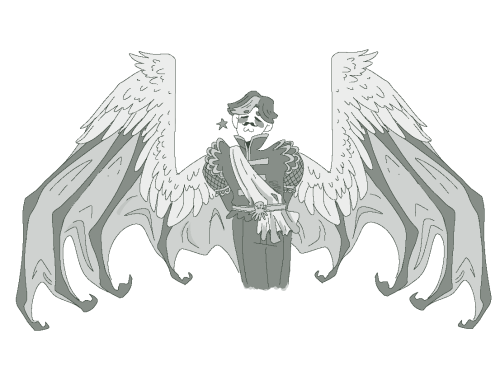 #art, #sanders sides, #tss, #remus sanders, #wing au, #old art, #why the plumbeous kite you may ask?, #it's for basically the same reasons as the bird who Roman's wings are based off, #so you'll hear more about it when i get to him, #I'll go into a little more detail about the reasoning for bird choices and such with the lights, #the darks are a bit more lore based i guess???
103 notes · See All
gingermapleAnswer

I was thinking two a day.
Today you guys get Janus and Remus, tomorrow I’ll give you Roman and Patton, and the next day you’ll get Logan + a lil writing snippet for Virgil since although he already has been posted, he’s got a little bit of extra lore I want to share.

First we have Janus! Like the rest of the ‘Dark sides’ his wings are leathery instead of feathered like the ‘Light sides’. Although his wings are more draconic compared to Virgil’s batlike wings.

#art, #sanders sides, #tss, #deceit sanders, #wing au, #pls pardon the old art, #also this one is first because tbh it's the one with the least lore and it doesn't look great.., #but yeah!!!, #it's finally here, #stay tuned for the rest of the sides!!!
69 notes · See All
drabbles-of-writingAnswer

Play-fighting is definitely not a super common or high-status thing to do. Fights would be more akin to small scuffles commoners or nobles who lose their temper have. Granted, nobles are typically either very pretty or very deadly birds, so the rare scuffle Amity has gotten to witness likely ended worse than a couple of bruises.

And then she sees Gus and Luz, standing in the middle of the goddamn hallway squaring off in all their tiny glory with a semi-ish circle of kids all somewhat paying attention. She rushes over like “oh my Titan, what are they doing? What happened???” n Willow is just “oh they got into an argument on if humans have poisonous saliva so now they’re in a stand-off. Anyway, five bucks says they stand down before they actually end up fighting.” And like RIGHT as she says that the two start angrily screeching at each other and doing that thing where they jump forward, try to hit the other with their wing, and jump back.

Amity is petrified because she doesn’t want her friends to hurt each other and Willow is just angrily handing Cat like 10 bucks. Amelia, thank god, managed to explain this was a regular occurrence and it’s never really serious. Amity is still concerned until Luz lands a hit on Gus and he just Falls Dramatically. Then the two get into a giggle fit and everyone disperses. Amity has never been more confused.

I have been waiting for this I knew somebody would say this and to this all I can say is: Luz would adore Ladybug and mimic Chat, and you cannot change my mind

That’s exactly what they do. Those little hops but around each other and their puffed up and all macho n Willow is just “are you actually going to fight or are we gonna stand here for hours?”