The saga of cultural differences with my upstairs neighbor continues: we were supposedto meet up at 8pm for drinks but she got home at about 6:30 pm and said “I’m just back from my sister’s place” which I thought meant she anticipated lateness so I went “it’s fine, we said 8pm, you still have an hour and a half” only it’s now 9:15pm without a word from her so I’m starting to think she actually meant to cancel stuff x)

#matt has a life#Shit from home#Note 1: I haven't met many people from Africa and a bunch of them are from the same family but my experience with this is 6 out of 6#with one Nigerian#four Congolese (tho technically it was still Zair when they left) and one senegalese so I could be wrong but it does feel a bit widespread#Note 2: I'm not texting her because I don't really have much spoons to go out with a new person in a new place tonight so I doit want her to#feel obligated
3 notes
unfortunate-arrow
Text

Headcanon: Garou is really bad with technology because he grew up in a dojo. This significantly complicates his Redemption Arc.

garou: i swear to god, i have no idea why that happened.

garou, throwing up hands: so sue me for assuming “minus goes with minus” and “plus goes with plus”

The Presidency has said that President Muhammadu Buhari is not talkative and so he is not expected to speak on every matter that comes up within the nation, including the herdsmen crisis.
The Special Adviser to the President on Media and Publicity, Femi Adesina, stated this on Politics today programme on Tuesday.
Nigerians are yearning to hear the position of the President on the lingering crisis…

So my parents got 23 and me for Christmas from my grandparents. Not a big deal. They were mostly just curious. My dads ancestry was all over the fuckin place. But mostly northern europe. Makes sense. We’re whiter than fuckin snow.

My moms is where we hit a lil hiccup.

We’ve always been told we have native ancestry. Not a big deal. Its just a thing. We don’t care. BUT. My grandpas dad was raised by his grandmother. His grandmother was half Choctaw. We have pictures of this woman with family members. We Know she existed. But there’s no way we’re actually related to her. Cuz my mom has NO native american dna. And we know its actually my moms dna cuz one of her distant cousins contacted her through the app and we were able to confirm that, yes, we are related to her. (I doubt that kind of mix up occurred but you never know.)

Now. If its accurate, we think we know what happened.

Basically back in the day, if your wife died, you got remarried like right away cuz you needed someone home with the kids (this doesn’t really apply if you don’t have kids,) in some cases, family members would swoop in at your wife’s funeral and take your kids from you until you got married again. And if the kids were young enough when their mom died, you just told them that your new wife is their mom.

I just thought it was funny when the results first came back and it was like “……………..so if we aren’t related to her……what happened????”

Like if we just knew about her through pictures and family genealogy (one of my grandpas aunts is a genealogist) then I think we would just automatically assume she just married into the family and maybe there was no records available of her husband’s previous wife. Or maybe a family member died and she was always married to him and they ended up with the kid of the dead family member and just never told him he wasn’t their biological son. Which that one could work.

But like. As far as we all knew before this, she was our biological grandma. My grandpa and his siblings grew up hearing stories of this woman.

Like. None of this matters at all cuz all of these people have been dead FOR YEARS. But this is what you do a DNA test for. Finding out shit that happened way before you were even a POSSIBILITY is awesome. You can unearth weird family drama and secrets that almost died out with the people involved. You get to try and guess what happened in some places where things are a bit unclear. And its fine cuz everyone involved is dead. So they don’t care.

#its way better than some of the other potential drama and bullshit that couldve happened#like my mom is like 98.2% northern/northwestern europe#and like. 1.8% Mongolian.#my dads side however. apparently just raped and pillaged themselves around the globe.#like was also like 98%....maybe a little less than that....northern/northwestern european#but he also had. like. mongilian and nigerian. and native. so a lot of fucked up shit probably happened there.#and knowing his side of the family NOW a lot of them really suck#im sorry if this post is annoying and no one gives a shit. but genealogy was a special interest for awhile#so this shit fascinates me#my mom also has 72% more Neanderthal dna than the average person. which is still less than 2%.#but thats cool
0 notes
everydaynycfoodie
Text 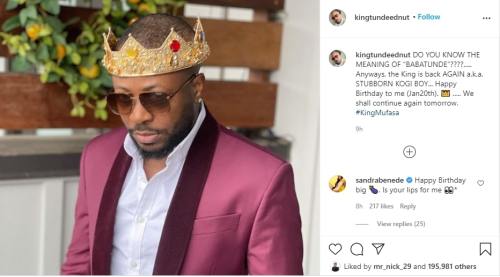 The Nigerian police say four officers were killed and one is still missing after they clashed with an armed criminal gang in the Birnin-Gwari area of Kaduna state.

Police Spokesperson Frank Mba in a statement on Sunday said the officers were ambushed by about 100 “bandits” as they returned from an operation in neighbouring Niger state.

The police say “tens” of gunmen were also killed in the…