Incubus has some really good lyrics. One of my favorite bands for sure. 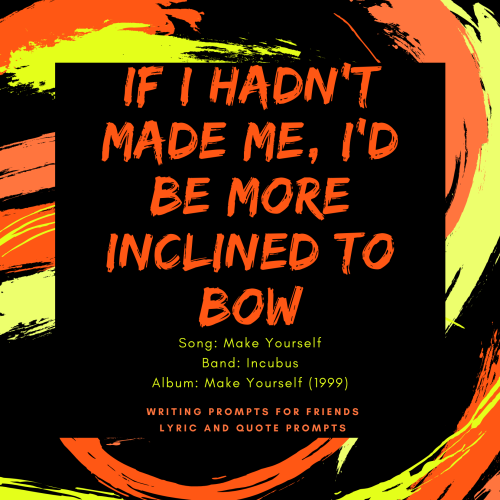 My brain trying to remember the names of my own OCs:

Send an au to my inbox [ex. coffee shop au], and I shall give you a few headcanons about it that involve my ocs.

The Pacific Islander man has a week to learn to play the ukulele.

Real frustation is when you know there’s a specific word to describe that one action, that one emotion, that one state of mind, and it’s on the tip of your tongue BUT WHAT THE FUCK IS IT-

Okay, writeblr friends, I need some help. One of my WIP’s is huge, and is going to be based off of many different cultures of our world. If there is anyone out there who is Native American and is willing to answer some questions I have regarding language, please DM me.

I want to do this right and I want to treat each culture I feature with dignity and respect. To Do this I don’t want to resort to stereotypes, and that means speaking with someone from each culture.

Please, if you have the time and the spoons, DM me.

First and last paragraphs of my manuscript.

Synopsis: JC isn’t a coward; he’s just a guy who ran away. He’s twenty-six years old and hasn’t set foot on Earth in eight years. There are too many memories there – too much pain and too much loss – and there’s nothing left on that rock worth it’s weight in fuel anyway. Plus, he has a new life now. He’s a smuggler and a damn good one. Who he used to be doesn’t matter. What matters is where’s he going. Or at least, he thought so.

“Alright,” JC said once they had moved to the new area. Hal went to grab for the bag, but JC pulled it away, swinging it over his shoulder before he had a chance. “Hey. You know the deal. I need the rest of your payment. 2100 and we’ll be good.”

“Yeah, well I ran into some issues. The place had tough security and I took a few hits. I told you rough terrain would cost extra.”

“We had a deal, boy. I don’t know what the rules are on Earth, but around here, a deal means something.” The man took a step closer and a few more creatures from the crowd approached, clenching their fists. Great, JC thought. Everyone around here had ‘boys’.

JC didn’t flinch, despite how intimidating the hulking mass above him looked. “I know, I know,” he laughed. “But, the thing is, Hal, money means a whole lot more.”

I need to prove a point. So reblog with reasons why comic sans is a good/useful font.

i’m currently trying to write a script, and i’m really bad at remembering to do things, but two weeks ago i decided i was going to start a routine.

“every thursday; 4pm, write 3 lines in script; continue until finished.”

today, i was laying on the couch, playing animal crossing and thinking about nothing, when my brain suddenly went “hEY GET UP ITS THURSDAY BITC-”

and i immediately got up and opened my computer, i checked the time and..

#writeblr, #writer, #writers on tumblr, #writing, #scriptwriting, #script, #routine, #writing tip, #kinda, #i had no idea what day it was, #or what time, #my brain was just like GET UP, #and i was like ok, #maybe my house ghost was just screaming at me again
0 notes · See All
richglinnenText

Memorial Day, they say, marks the unofficial start of summer,
But I think it’s when the filthy thing is dragged out of the garage
And heaved into the window:
A process inducing sweat and dirt-stained arms,
Like you just clawed out of your own grave—
That’s when summer begins.

#writblr, #writeblr, #isabellaspeaks, #wip, #mywriting, #writing, #tbh, #its been hard to find motivation, #like i can write, #and i can write good, #its just putting down the first sentence feels so tedious, #so meaningless, #anyone else feel this, #? 👀
2 notes · See All
qwordyText
#sorry not sorry, #writeblr, #booklr, #writing, #writer struggles
0 notes · See All
storyunrelatedText

Grunting and sweating the helots heaved the cart of money up to the feed-trough and tipped it over. Down went fluttering millions upon millions of pounds, down into the hungry, grinding maw of the machine.

“Turn it! Turn the crank!” Bellowed the Executive from above and another score of helots - also grunting and sweating, for that was what helots tended to do - put their backs into it and got the crank turning.

Thanks to their efforts out popped from the machine another shiny, well-produced piece of media entertainment. The special effects were very good.

Critically though it was somewhat divisive.

1 - I love to write stories with three main characters (I grew up on a diet of Harry Potter and Percy Jackson, which had iconique trios- can you really blame me?) and I vary from switching povs (a ruby in the rain) and not having first person pov (death in bloom). I don’t often forget characters because I don’t have a lot to juggle, lol.

5 - most of my characters start off with no hope, lol. And eventually (usually bcuz of a love interest or best friend) they gain hope again.

Thanks for the tag @mudtomagic!

When she stood, Anna stood too; squeezing her fingers a little harder.

That’s from my WIP; a horror story, currently titled ‘Monstrous’.

Challenge rules: Post the last line you wrote, and tag as many people as there are words to do the challenge.

So apparently I need 12? I’m not social enough for that, but here’s a few (not sure tumblr etiquette for tag games, I don’t usually do them, sorry if you don’t want tagging):

Quick question; are there any active Writeblr discords running that I could join? I’m looking to branch out some, and meet other writers!

Loved, is the Poem Under Ashes

I have made 0 progress with my WIPs the last two weeks, but I can’t stop filling my notebook with random story fragments. Inspiration is a weird thing…