I dream of a beach with pink sand.

I am not alone on that beach. I see you there. Away, your back turned towards me, hair blowing in the wind.

And yet, when I try to call you, to run towards you, I wake up before I could reach you. I wake up cold and alone

ID:  A WOMAN WITH FLOWERS IS VEILED, MAKING HER FACIAL FEATURES UNCLEAR.  THE EFFECT MAY SEEM ROMANTIC TO SOME PEOPLE. THERE IS YELLOW TEXT OVER THE IMAGE WHICH READS ‘i do not exist as me// in face to face world// i am an echo// of a fantasy// here. ~M.T. Noah’ :END ID 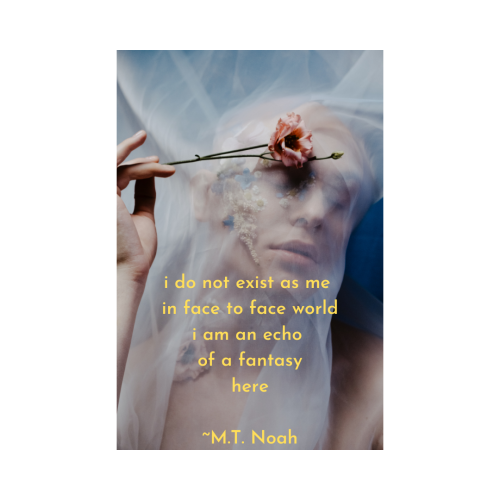 Hey guys! I’ve been seeing a lot of people do this, so I thought i should do it too! Here’s a little info about me and my WIP’s!

I’m Aimee! She/her, bisexual, 21, and in college studying Spanish and Studio Art! My interests include creative writing, trying to read, and art (mostly drawing). If you want to see me reblog stuff and occasionally post art, my main is @artsietango :)

My current WIPS are:

The first book I’m working on is The Quest for the Book of Balance, and The Questing Academy is the series name. 8 teenagers are accepted into a school that shows them that reality is more magical than they could have imagined. But what comes with the light of magic is also paralleled by a slow rising darkness, turned by the tides of an sorcerous. It’s definitely not the first year they were expecting!

As far as I’m aware, this might be a standalone, but it also may have a sister album. And it may be more of a passion project than something I plan to publish. Harper Coaste is 19 and ready to get out of town, but she has some old scores to settle and bridges to burn before she goes. Will her internal rage and spite destroy her though? Or will the consequences of her actions change her story forever?

A crew of eight find that the ship that they operate and call home is being junked, but only a few of them are making it onto the new craft. Throughout their different POV’s, they try to figure out why their government has some of them blacklisted, and the real reason why their Mother ship is being junked.

Winnie and the Mermaid (Children’s Lit):

This one is actually a “finished” story! I’ve edited it once, but I probably need to pass through it again. Winnie is a young girl who moves with her mom into her great-aunt’s house in the British countryside. Feeling incredibly lonesome, Winnie explores the woods in the valley below to find an unexpected friend living in her pond.

I have so many more stories I want to work on, but these are the main four that I think are a good start for now. I’ll be sure to update more often with what I’m working on and my progress! And please feel free to include me in writing ask games and ask me questions about my wips!

This is your friendly reminder to show and not tell<3

While it’s not a blank page I am still staring at this 15k mess of words and notes going ‘where do I start to fix this?’ How do I rewrite this from Cloud’s POV to Zack’s? What hurdles will this throw up for me? What conceptual flaws will I discover? How badly will it expose the tenuous character motivations?

Look, there’s not even any solid colour coding going on! How will I FIX THIS?!?!

When I’ve cobbled this together… it’s gonna be MAGNIFICENT! I’m sure of it. I know it will be good. But right now… it’s just pain and suffering.
*internal scream*

I believe everything echoes. They’re all around us.

It’s walking into a room with the distinct feeling that people were talking about you just before you entered. It’s the eerie sensation of being in a house where you know the previous occupant died. It’s waking up from a dream that you can’t seem to shake. It’s a voice in your head that doesn’t belong to you.

For as long as I can remember, I’ve felt reverberations of echoes inside of my head.

It’s because you’re special, the voice whispers to me. You have always been special.

The intrusive thoughts used to bother me. I used to go to my mother in tears because I couldn’t get the voice in my head to stop tormenting me. I have tried therapy, I’ve been on medication, I’ve prayed, and been prayed over, but nothing stops the voice for good. Eventually, I gave up trying to get rid of it and just learned to live with it.

Things are easier that way.

I smudge a line on my sketchbook, trying to capture what I had seen in my dream. The sense of dread still sings in my chest, the taste of fear is sharp and bitter on my tongue. It leaves me breathless, searching for a resolution.

“What does it mean?” I ask softly. My fingers are covered in charcoal and pastel chalk dust. I draw another line in my sketchbook, desperate to capture the overwhelming sense of fear that the dream had left me with even in the waking world.

You know what it means, She whispers.

I don’t stop my work. I’m desperate to get this done, to leave my panic and dread on the page. It’s a buzzing in my ears, unrelenting and maddening. “She died.”

The voice rarely gives me straight answers. They normally come to me in riddles, in images, in cryptic messages that make me want to peel back the layers of my skin in an attempt to see the truth beneath. It startles me enough that my pencil stills.

The last moment of my dream flashes through my mind. I can feel the heat from the flames blister my skin and burn my eyes.

Yes, She promises, they do.

You know how. You saw it. You felt it.

I did, but that doesn’t mean I understand it. “I saw it in a dream. Dreams are just dreams. They don’t always have a prolific meaning.”

Dreams are more real than you think.

Law of Story Physics #126: A dream is a direct product of a real world experience.

Friend: *telling me they know I’m texting a guy*

Me, actually searching the top 10 best poisons for assassinations and if rubber ducks can be seen as a threat:

“Stop bringing your weird pets to the office.”

“They aren’t pets, they’re magical creatures, and I don’t exactly have the power to control what they do.”

Character A lives aboard a spaceship, cataloguing planets, stars, galaxies, black holes, as part of the Mapping the Universe Project. She is part of the first generation of celestial adventurers and cartographers, propelled by her desire to be the first to discover complex alien life.

ever be editing and thinking, “am I making this worse?”

The people of Kairas generally use specific plants to create their potions, most common being, the thistle. Thistles have healing properties, each spine glows with the vivid colour that it is.

red thistles are excellent for healing and can be mixed with either blue or green thistle to create the perfect potion. Queen Hekate and Princess Persephone usually use a concoction that is mixed with red and blue potions, creating purple. Purple potions are found all over the castle, and it wouldn’t take much to catch a servant trying to steal one for himself. These potions in trade cost about 50 bronze pieces per vial.

blue potions are meant for magic. Blue thistles are rarer than red so people have to be careful how to cultivate them. These cost 70 bronze per vial or you can trade them for 70 bronze pieces. These blue potions are used by magicians all over Kairas, and they’re potent enough to raise ones magic ability to 10 times as much. The border that is in the middle of Kairas can be milked for magical energy, but that would weaken it, do people only do it when blue potions are in dire need.

Green thistle potions are for energy. Salem, the king uses this and red potions, usually mixed they will turn into a murky brown sort of concoction. These are the rarest potions to find and usually sold for 100 bronze pieces making a whole of Bronzelithe. These potions are usually sold by thieves and you can find a lot of them stacked in a circle in the shrine of Tenebris.

cutting scenes from your story like you’re a director and that’s just showbiz, baby

Anyone got any favourite character descriptions they can share?

I’m doin some research for a new blog post (for my blog, its amazing its great its ellaholmes.com)