I’m having a little writers block for the next part of Beautifully Broken and I’d like to ask for help.

What would you LOVE to see in the upcoming part? Or an idea?

Any help would be appreciated!

I’m getting antsy and my fingers are noticeably restless and as strange as it sounds itchy. I know I need to write, I want to write, every part of my body wants to write.

But my brain whenever I pick up a pen goes:

And nothing comes out. I have stories inside of me, but they won’t come out. And it’s gotten to the point where I am literally itching to write.

#writers block, #i want to write, #personal, #itching to write, #why you do dis, #stupid brain, #good mythical morning
0 notes · See All
fae-fireText

It kinda sucks… (excuse the wording, but) I used to be able to shit out an Elezen character, especially Ishgardians, without much thought. Zero effort. None. I could come up with a who, what, where, when and why in minutes. But now that it’s like…5 years later…I can’t??? I don’t even feel inspired to any of my ten retired ones. I WANT to feel inspired to do this though. I wonder what changed… I want to think of something so bad but I just can’t??

Y’ALL EVER HAVE THEM DAYS WHEN YOU WANNA WRITE BUT YOU HAVE SO MANY IDEAS AND YOU DON’T KNOW HOW TO PUT THEM INTO WORDS IM STUCK!!!!!!!!

hello everyone. I’ve been writing a fantasy novel for quite some time now and I want to let my readers know that my main character is bisexual without having to saying “I’m bisexual,” or “I like boys and girls,” or “I swing both ways,” or whatever. In my universe, I also don’t use those labels. People just kind of are how they are, but I don’t know how to direct that to the reader without making it too subtle (in a way that they wouldn’t catch it unless they were really paying attention) or too obvious (in a way that painfully cheesy/cliche that I almost offend the idea of it all). Being a bisexual myself, I thought it would be easy to write but I’m truly at a loss.

Eve 6, man. Whatever happened to them? They were like THE band in the 90′s, I feel, and then they kinda faded off the radar. 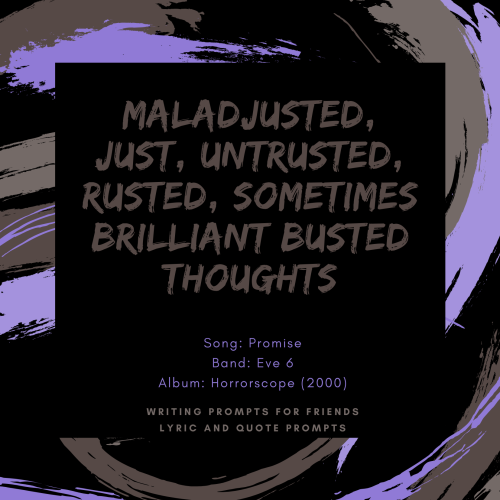 “If there’s a book you really want to read but it hasn’t been written yet, then you must write it.” -Toni Morrison

Knowing what to write, as we’ve discussed, involves knowing yourself. You will write with passion if you write about topics and people close to your heart.

I learned this truth again when a friend told me he wanted to be a writer but was struggling. He’d been a cop for more than fifteen years but was tired of the job. In a few more years, he could retire with a full pension, which he planned to use to support himself while he knocked out novels. Crime novels. He had the experience, we agreed. He should give it a try. But the pages of what I read were dull, larded with technical jargon and the accouterments of police work. They were weak on plot and character. He clearly was not engaged by the stories.

One night while we were talking about how to make his stories more interesting, we drifted to the subject of his collection of beer memorabilia. As he discussed the old beer bottles and vintage advertisements that filled his house, his eyes lit up. He was clearly engaged. We agreed that maybe he was writing about something he didn’t really like–police work–and the novels reflected his disinterest. He should try, instead, to write about beer stuff. He did, and he has since published several excellent articles in trade magazines. He also was a big Elvis fan and eventually wrote a book of triva about The King. 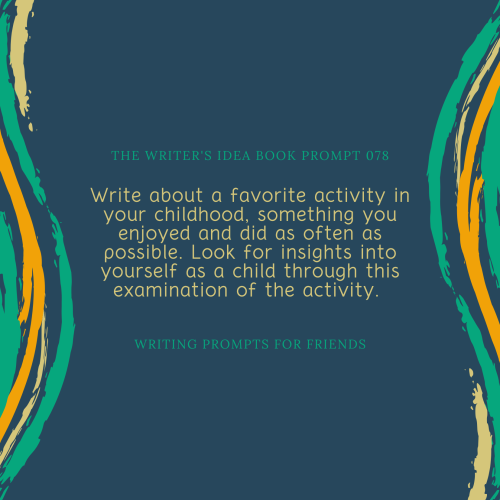 I jump into the deep.

Trying to get away from the noise and pain.

A young farm hand begins a passionate affair with a widow.

#also we are just gonna ignore all the 270 drafts in my draft section, #writing problems, #writers block
1 notes · See All
buckys-other-punkText

My brain: Alright we got the perfect outline for this fic. Let’s start this!

My fingers: Hey look I did something…

Please send me some fantasy writing prompts. I’m out of ideas and anything would be appreciated :)

The gun shook in my hand as I pointed it straight at his chest.

“I said… let her go,” I repeated, my voice just as shaky as my hands. He tilted his head to the side, his eyes almost pleading.

“I can’t. I can’t stop,” he said breathlessly, knife steady against the porcelain skin of her throat. She whimpered something, and he pressed the knife against her, little beads of crimson shining against the steel.

“David… just let Amelia go. Let her go and we can go about this calmly. Even if you don’t do it for her, do it for me. Do it for our kids,” I said, struggling to keep the tears at bay. He shook his head, closing his eyes.

“I can’t shut them out. They’re screaming, and I have to do it so they’ll stop,” he said. He shifted the knife so he could drag it deeper across her throat, but I pulled my trigger faster, and I have impeccable aim.

“I’m not! Open this fucking door right now or i will break it down.”

Write Back Art You is an Art/Writing Discord server I run open to people making fan-content, original content, and everything in between!

The main goal for this server is to allow for creators to support each other, and help each other learn and grow as artists.

Everyone on there so far is a very chill and kind bunch, and I’d love to grow the server more to support more people and maybe do fun events together down the line! So join in and check it out!

y’all asking for a sequel on the #tea server zuko au :

me, quietly to myself because i canNOT afford to get invested in ANOTHER au when i can barely finish most of my oneshots: fuck

me, lying in bed at night, thinking about the au: fuck

me, opening another draft on my docs without even thinking about it: fuck

#tea server zuko au, #tea server zuko, #ao3, #fanfic, #zuko, #why, #writers block, #but it really be like that tho, #i literally already know how this is going to end, #i'm never gonna be able to finish it, #oof, #rip me lol, #heckin, #why do i do this to myself, #don't get ur hopes up tho, #idk if i'll actually write it, #i don't even have a plotline lol, #it was just supposed to be a oneshot
9 notes · See All
theangel-writerText

i’ve rewritten the first chapter of my wip seven times because none of them have successfully passed my vibe check.

they’re either too bright and happy, too dark and brooding, or just so incredibly stupid that i can feel myself lose brain cells while rereading it.

At a stand-still with my current fanfic and no ideas coming into my brain. Might as well start a new one!

Me, with both writers block AND art block:

Well what the fuck am I supposed to do NOW?! 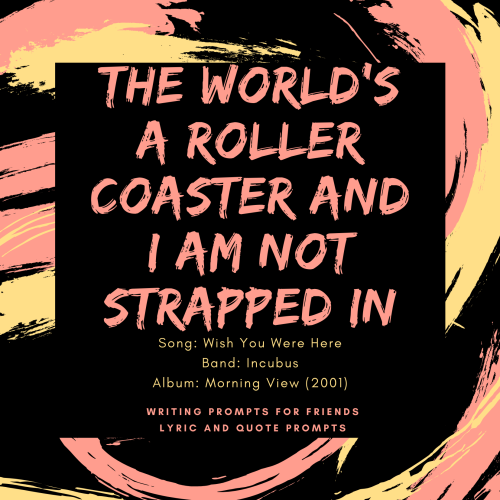