Breath of the awild, but prolonged constant use of the Zora Armor turns Link into a Zora.

Cause y’know, why else would a Zora give a non-zora love interest (that would age and die faster than them) a magical set of clothes that make them more zora-like if it wasn’t to ensure that said love interest lived as long as a zora would?

The painter needs a spear for the spell, but the greedy hunter won’t let her have it.

If they are in their own Resurrection chambers do they also lose all their memories like Link?

Every time you’re introducing a new character, the tone and direction of the story should change a little (which is what happens to you in real life when you meet new people, even if the change is minisule)

Ok ok ok so hero and vaillant are actually best friends but they don’t know the other is actually their enemy. They both grew up in the same terrible environment but the hero took ghat experience and wanted to make sure no one had to go through that and the villain took that and blamed everyone who did nothing and just took their anger out on the world.

Bonus: they have another friend who also grew up with them but became an anti hero sort of person. Like they won’t hurt random people but if you are some one who could stop a situation like that or is just being rude they will go full villain on them.

Person A: “….That was horrifying, pretty sure I’m gonna have nightmares for the rest of my life.”

Person B: “I did tell you to look away.”

Title: I Try To See The Glass Half Full, But I’d Probably Drink That Too

Tags/Warnings: Jadzia DIDNT die because uhh fuck u, alcohol use, brief mention of past alcohol abuse

#kiradax, #star trek ds9, #star trek, #the void writes, #garashir, #elim garak, #kira nerys, #legate damar, #this is a damar stan account tbh, #cw alcohol, #star trek deep space 9, #star trek deep space nine, #again with the Too Many Names, #I have no idea of the validity of the existence of this deleted/planned scene, #but either way, #I agree w anon, #I Would Like To See It, #writing prompt
0 notes · See All
write-it-motherfuckersText

The screams of terror and pain, seemed so distant in this moment, your mind unable to focus on anything but the terrifying monstrosity above you.

Your day had been otherwise completely mundane, until only a few moments ago, everyone around you looking as though they were simply going through the motions, just as you were. It was something that had made the sudden change, all the more jarring, as though just the shift of atmosphere, had given you a severe case of whiplash.

It hadn’t taken long for things to go rapidly down hill, from there.

Before you could even begin to process the danger you were in, you’d found yourself pinned harshly beneath the beasts deadly grasp, their maw a mere hands breadth away from your face as they roared at the petrified crowd, their towering form not even flinching as a car crashed into them and went flipping violently off to one side, startling the frozen crowd into action. With your head ringing and body frozen in fear, you could do nothing but lay there under them, desperately trying to take in air as your panic threatened to consume you.

You had no idea why it seemed to be targeting you, nor why it had yet to rip you apart, as you’d already seen it do, to anyone who had been foolish enough to draw too close. But either way, you knew it was only a matter of time before it decided it was through.

Though you desperately wished that someone would save you, deep in your bones, you knew there way nothing anyone else, could do.

#write-it-motherfuckers, #writing prompt, #writing prompts, #writing, #prompt, #story prompt, #story prompts, #story, #prompts, #my prompt, #original, #random, #imagine, #story time motherfucker, #horror, #monster, #supernatural, #magic, #beast, #fear, #dark, #halloween, #mythology, #demon, #yokai, #spirit, #deity, #demigod, #fuck knows honestly. I'm not even sure where this one came from. Hopefully you enjoy it all the same., #my long prompts don't seem to get anywhere near as much love as they use to. Though that's a problem that's been going on for a while now
38 notes · See All
songspiredText

A North African nonbinary person dreams that a daring woman finds a saucer.

Katara: How did you get in?

Zuko: There’s a back door, Katara. I was trying to tell you that before you broke the window.

Katara: Well, I wasn’t the one who almost blew our cover because I was having a fight with my boyfriend!

Zuko: He’s not my boyfriend!

Aang: May still be a bit hot. Better wait ‘til it cools off. 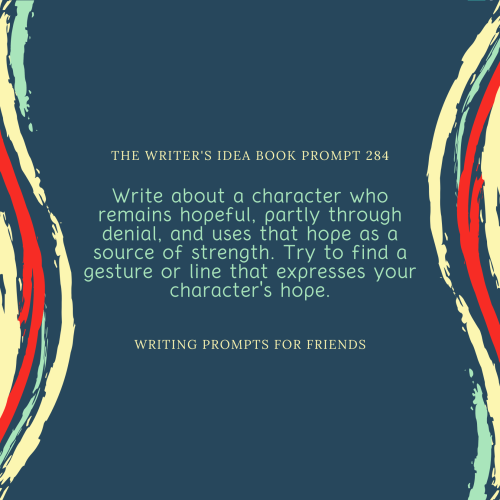 The wise pizza delivery person gradually falls in love with his self-centered enemy.

30: The Dude Bro’s Having A Princess Party

EAT ALL YOU VEGGIES 😋

Ghosts can sign up for jobs in the afterlife to move on. Some of them are professional haunters, some follow and occasionally possess terrible people, some try to perform acts of goodness. Some of them still have to do the admin jobs.

All it takes is one spark to get your story going. 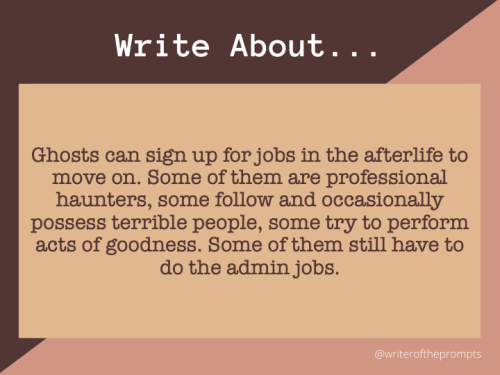 hinata as an youtuber who records asmr and at night works in a bar, atsumu his co-worker is secretly in love with the youtuber hinata, but doesn’t know that his red-haired colleague is exactly the same guy

Whumper carves into the whumpee like a pumpkin for spooky season

Summary: you dance in your underwear, completely unaware that the neighbor opposite your building can see everything.

Warnings: lingerie dancing, I don’t know what else - have a sip of sexiness!

A/N: Another one for @the-ss-horniest-book-club these prompts are so addictive I swear 😁

The music playing helped you to easily sway your hips around your apartment. In the midst of getting undressed, you were left in your lace lingerie, black to be exact. It was a very long day at work, and you were relieved to be home just before the storm was due to arrive - any time now.

Your curtains were left wide open, usually the residents in the building opposite were too busy going about their own business to take any interest in what was happening around them.

All residents, except one.

Bucky Barnes lived in the opposite building, top floor with wide windows. He had a chair next to the window, a small lamp on a wooden table. He was currently reading a book when something caught his attention from his peripheral.

Bucky glanced out of the window. People on the streets below him walking into each other and yelling for a taxi. New York was noisier than he ever remembered, but the population obviously grew over the decades he was absent.

But it wasn’t the shoppers or businessmen and women that caught his attention.

It was you, again. He could see straight into your apartment from his window. Your curtains open, your hips swaying beautifully to a song he wished he could hear. Your choice of lingerie had him squirming in his seat - how he wishes he could peel the material off. He watched your body, your hands roaming down your stomach and teasing the waistband of your panties.

It felt wrong, he felt strange ogling at you like this. It wasn’t natural, but he figured if you wanted privacy, you’d have closed your curtains and danced away where nobody could see you.

A bolt of lightning lit up the sky. You stop dancing and look up, just as the rain starts to pour down. Slowly your eyes glance across to the building opposite and you see him staring right back at you. He looked down into his lap as soon as your eyes met. You couldn’t see it, but he was blushing like crazy - for seeing a beautiful woman dance in nothing but her lingerie, and for getting caught.

Bucky should have been ashamed, but he wasn’t.

You had no idea how long he was watching. But he was a handsome man, he looked buff and strong. Definitely the type of man you’d like to get to know better.