Wei Wuxian: Set the scene. Have we been drinking?

I kind of don’t like that choice, but from the standpoint of how it impacts the storytelling and WWX’s character.

It is not like, within the novel canon, it would not make sense for MXY to resent JGY. JGY is the reason why MXY was sent back in disgrace to Mo Village, and ceased to be able to learn cultivation. The text also tells us that even before the abuse worsened things, MXY came back absolutely rattled and out of spirit. If the decision to add this target had been used in order to further flesh out MXY, or explore more fully what JGY’s characters and his actions, it would not bother me so much. Yet, that is not the role that this mark plays in CQL.

The mark instead, is part of the simplified and blunter storytelling style of CQL. By that I mean that the mark remaining on WWX, and thus being a “””threat””” to him, is there to tell the audience: keep watching! there is more ~mystery~ to resolve! We swear, there is more coming, there’s a big boss out there, the hero is not fine!!!! Isn’t that the only thing you need to do to build suspense? With more apt storytellers, this could have been different: they could have mobilised that mark throughout the narrative to increase the sense of tension, of urgency, of angst. Perhaps WWX would have grown weaker as a result of time passing. What if WWX was not only threatened by the cultivation world, but the very body he’s now inhabiting, slowly rejecting him for failing to pay his part of the deal? However, since the mark is not in the novel, the production team allow themselves to forget this addition for most of the narrative and do not consider how it should inform it aside from needing to shoot shots of WWX still having it on his body and later being freed from it at the end. The identity of the person WWX needs to enact revenge upon for MXY never feels like a pressing thing, both for the audience and within the narrative. We never truly feel that there are stakes associated with it when we’re watching the series. It’s only the narrative needing a clear, blunt, visual reminder in the first few episodes that there is ~more mystery to come, keep watching~ you want to know the big reveal, don’t you~ there’s the a big boss at the end, promise~. And  that kind of lazy writing leaves me very meh.

What really annoys though, is the subtle way it impacts WWX’s characterisation. In the novel, WWX leaves Mo Village with nothing binding him. He’s paid his debt toward MXY, and he’s avoided the one person who knew him in the past.  The man whose first life and fate was defined by debts no longer has anything to settle. As WWX go on, on his own, it’s acknowledged that he has an opportunity to live his life without anything tethering him (well, until unfinished business catches up with him at Dafan mountain). So when the mystery surrounding the arm props up, WWX doesn’t go after that mystery because it could be tied to the mark that remains on his arm–he does it because of who he is as a person. He doesn’t risk his life to uncover JGY’s crimes because that could somehow be the answer to the mark he still has on his arm, but because of who he is as a person. Having that other motivation, having this tether, muddies in some ways his characterisation and the driving forces of this character. It also muddies what it says that WWX lets himself be brought back into the troubles and politics of the cultivation world when he meant to avoid them after his rebirth and when it is ultimately the choice he makes at the end of the book. And I don’t feel like CQL sort of addresses or makes up for the impact it has on his characterisation, imo.

In short, while it is not, by far, the most mind-boggling choice of the CQL production team has made based on what is in the novel, it is indicative for me of the limits and failings of the adaptation. Not only does this adaptational choice not seem to bring a new perspective on the source material, but it is not fully developed within its own storytelling and the ways in which it impacts other aspects of the original story (like characterisation) do not seem to have been considered.

So… I wrote a thing.

Jiang Cheng overhears a conversation about love between Yanli and Wei Wuxian and panics as his siblings confess their feelings for two very obnoxious peacocks. The logical solution: invite Jin Zixuan and Lan Wangji to a lunch date where Jiang Cheng can show how horrible they both really are and absolutely most definitely not make a fool of himself at all.

The thing that is worst for me is not so much that he asks LWJ to let him go, but that he jumped in the first place and that he did so after throwing the yin hufu at the crowd of all things. I know, I know, multiple interpretations, yada-yada, but it boggles my mind that someone would read mdzs and think that the right choice for a character who is defined by his resilience and his single-minded devotion when it comes to doing what he believes is right, would be: to let the power-hungry cultivators continue to war for the yin hufu and to choose to end his life. At least if CQL!WWX had chosen to take the yin hufu with him, to have it destroyed into the….. lava? at the bottom of the cliff? I could live with that choice because as an adaptation it would still fail imo but at least as its own narrative CQL would be more coherent? But still it baffles me. If they wanted to show WWX wanting to meet his end at Buyetian, why not show him deciding to let himself be slain in battle? Or give himself up at the altar of JC’s fury as a misguided perception of that being any sort of atonement for the fresh passing of JYL? I know the death by falling off a cliff is a trope that is very common, but that’s exactly how tropes fail: when they are used in places where they don’t fit with the narratives or the characters.

Although WWX is ready to put his life on the line to protect others or an ideal, he’s never shown to have a death wish. I mean WWX literally has a line in the book where he says that not being afraid to die is different from wanting to die. Imagine having the character literally spell it out in the text and still deciding to adapt him that way.

they dont wear their ribbons bc theyll get find out, but they have them on their persons subtly

Who cares about the crowded, broad road? I’ll walk the single-plank bridge into the night - WWX 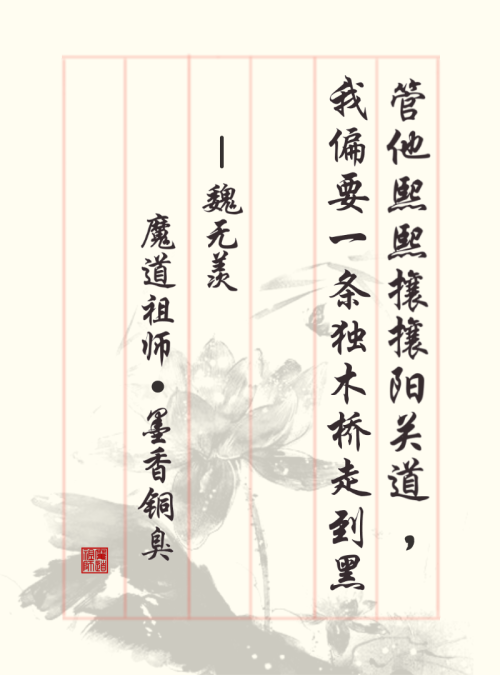 WWX: yes. I love him. LWJ is handsome and smart and kind. You’ll see.

JC: urgh. You’re only saying this cause you’re lovesick! There are HUNDERES of people like that! Like .. uhhh. Like LXC! Couldn’t you have fallen for him ? HE is kind and smart and handsome! But also so much more! Like funny and generous and badass! So badass.

back to a good ol wei wuxian sobbing at nevernight icon :^)

What’s happening in this picture,

All I got from MDZS trailer was: Yiling Laozu sexy

wwx: no maiden would dare to marry you 😒

happy birthday lwj! what better birthday gift than getting married to wei ying?

lan zhan in wedding reds as requested by anon.

@mdzsnet for the birthday event! 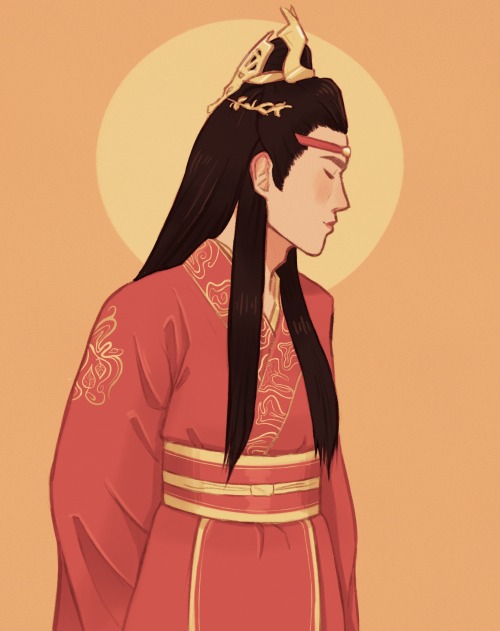 god pls it’s so funny because jgy’s whole plan partly hinges on the fact that lwj and wwx are so stupidly in love that they will follow each other everywhere and he’ll be able to take them both captive. and then wwx is like uhh no why would lwj come he doesn’t even know i came lol we’re in separate rooms and jgy and lxc IMMEDIATELY drop everything to be like ???? yall arent FUCKING ???????

like… for lxc it’s understandable because he has had to live with his little brother sighing mournfully at any mention of wwx for the past sixteen years only to find out that when the love of his life did miraculously come back to life lwj did NOT immediately get in his pants (i mean he did technically. but it didn’t become a habit) but for jgy it’s so funny like please… he’s not even related to them he just puts his entire villain monologue on hold to stick his nose into wangxian’s 750k slow-burn mutual pining catastrophe. guanyin really does always live up to its goal of exhibiting the insane dysfunction of every character at the same time in ways that make you want to both laugh at the utter ridiculousness and rip your fucking hair out

#like... the way xiyao react MUTUALLY in this scene..... yeah it makes me go fucking insane i hate it#asks#anon#lxc#wwx#jgy#xiyao
54 notes
youknow-likealiar
Text

A boy has no name