married couple being disgustingly in love 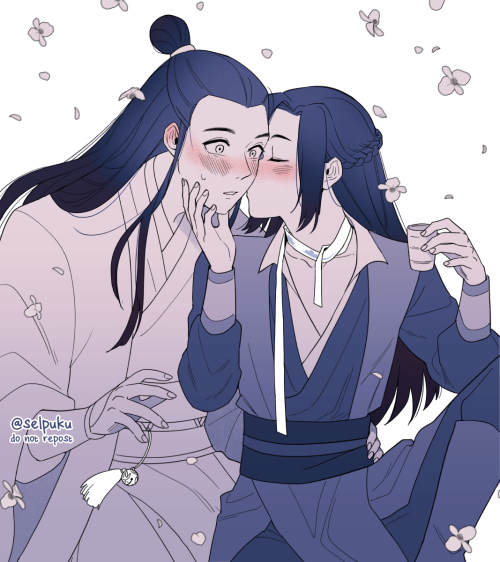 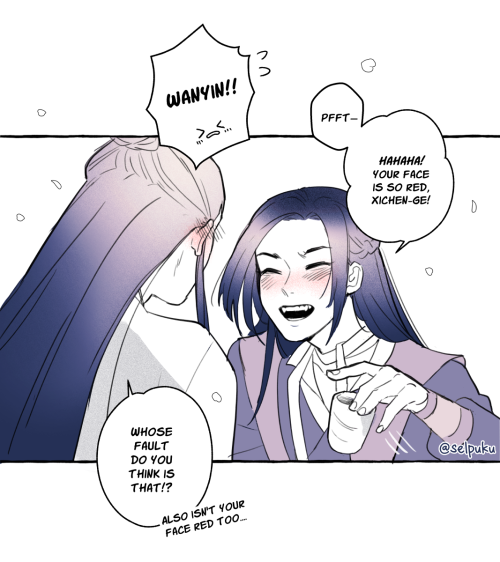 Hope and Lack of faith

Day 25 of JC Love Month brings me back to my Sing to me series, but it’s finally time for Nie Mingjue to join them and to see if Jiang Cheng’s bell really do help or not. There’s not only a lot of music, but also a lot of feelings this time. It follows after JC Love Month Day 20.

In the end, Nie Mingjue follows Jiang Cheng’s invitation to Lotus Pier for a friendly Sect bonding. Wording it like that has been Lan Xichen’s idea, because he thought it would imply boring Sect talk to Nie Huaisang, and when Nie Mingjue shows up without his brother in tow, he seems to have been right.

Jiang Cheng startles when he sees Nie Mingjue because he looks like shit; maybe even worse than Jiang Cheng did right at the beginning with Jin Ling and that’s saying something.

He’s actually afraid Nie Mingjue is going to keel over right here on Jiang Cheng’s pier and where would that put him?

“Da-ge,” Lan Xichen says, voice full of worry as well, so Jiang Cheng guesses that he must look worse than before.

“If you’re going to help me with this, then we should probably drop formalities,” he rumbles out and he even sounds tired.

“Of course, Nie Mingjue,” Jiang Cheng replies easily and then motions for them to start moving towards one of the private piers.

The one he and Lan Xichen spent so much time at, Jiang Cheng realizes with a start and his face starts to burn when he remembers the last time they sat there together.

Lan Xichen must think of that too, because the look he throws Jiang Cheng is very soft and full of love and Nie Mingjue groans between them.

“I did not come here to watch you make eyes at each other,” he complaints, clearly more in his element already. “Please tell me you at least got your shit together.”

“We did,” Lan Xichen says, and Jiang Cheng fears he’s going to burn up when Lan Xichen looks at him again.

“I have to go look for Jin Ling,” Jiang Cheng says, absolutely uncomfortable with his feelings in front of Nie Mingjue like that and he marches right off, trusting Lan Xichen to guide Nie Mingjue to the pier.

“Is he always like that?” he still hears Nie Mingjue ask with a slight laugh and he just barely catches Lan Xichen’s soft “Yes” before he’s out of earshot.

Jiang Cheng takes a deep breath; he has to get it together in front of other people. There will be cultivational conferences where both he and Lan Xichen will be present and he cannot lose his cool like this all the time.

He hopes it’s a matter of getting used to it, though, and Jiang Cheng figures he should probably get back to them. Preferably without Jin Ling, because for all that Jiang Cheng loves him he would be a disturbance they don’t really need today.

Jiang Cheng takes a few more deep breaths before he walks back to Lan Xichen and Nie Mingjue who sat down already, steaming hot tea in front of them.

When Jiang Cheng comes back without Jin Ling, Nie Mingjue throws him an amused look and even Lan Xichen has to hide his smile, only causing Jiang Cheng to bristle again.

“Not a word,” he growls out before he sits down with them and thankfully they stay silent.

“How are you, da-ge? Really?” Lan Xichen asks after his first cup of tea and Nie Mingjue sighs.

“Not good,” he then admits and looks down at his hands. “It feels like I’m always at the edge of a new qi deviation,” he says and Lan Xichen jerks at his words.

hello there, the way this is so specific has been killing me for DAYS 😂  I had to send screenshots to my friend bc of how specific it is dude, like I love that you know exactly what you want bc it makes my brain not have to work as hard, but BRO dskjfhkasd why do u like to see my boy suffer So much 😭😭😭

i hope this lives up to ur expectations!!! 🥰

It had been a long day. A long and tiring day, so if he lost his temper, he couldn’t be blamed, right? He just wanted to go back home and play the flute, perhaps sleep a little, but he was absolutely done with spending time with everyone else. So, why did he find himself still in the company of so many people? Why was he still sitting here with Wangji, Wei Wuxian, Jiang Wanyin and a handful of juniors? Why?

#xicheng, #jiang cheng, #lan xichen, #the untamed, #mdzs, #fic, #my fic, #ask prompts, #lxc, #jwy, #minimal editing, #bc im tired asdkfajdsf, #sorry, #now that they're all up tho, #i do want it to be known that i Will be editing these later on, #fully and properly, #and posting them all on ao3, #more than definitely after i finish the other big fic i'm writing, #so it may not be until next year, #But i do want these on ao3, #idk that i'm fully happy with this one, #i hope i did well to what you wanted anon!!!, #if not feel free to send what you wanted to happen and i can adjust for when i reupload onto ao3???, #anyway enjoy!, #that was the last prompt i had in my ask!, #Anonymous
38 notes · See All
mistypluieText

(another take on @esmeraldablazingsky’s art trade with me <3)

i know he’s a dog person but hear me out ok maybe if jiang cheng had a very big, very fluffy, very affectionate cat he could learn some self love

is this about my unwritten fic where lan xichen turns into a cat? maybe :)

#jiang cheng, #the untamed, #mdzs, #xicheng, #(i mean kinda. the 'lxc turns into a cat' idea is xicheng endgame but yknow what?? it doesnt have to be maybe if lxc turned into a cat they, #could become friends 🥺 or maybe this cat is just. some random cat idk man either way maybe jc should have a cat), #misty.art, #look this one is full body!! im trying to get better at posing and..drawing feet. that sounds weird but i can never get them to look right, #im trying :'')
103 notes · See All
strawbteaText
#xicheng, #mdzs
39 notes · See All
bettydiceText

Jiang Cheng
I need your help

Nie Huaisang
this should be good

Jiang Cheng
…
Do you know a nice coffee shop?
something quiet and cozy
but not like empty
not too fancy but not cheap

Nie Huaisang
there’s a cute place next to the park
the one I carried you to
cozy interior, lots of plants

Nie Huaisang
do you need help picking out an outfit for the date?

Jiang Cheng
shut up
Who said it was a date?
I can dress myself

Jiang Cheng
I didn’t ask!
but thanks

Nie Huaisang
say hi to Xichen-ge
call me after

Lan Xichen: Can you hold this for me? 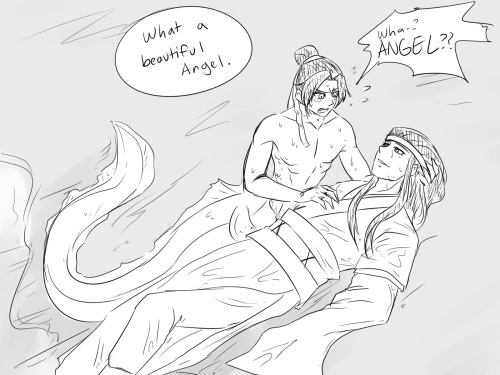 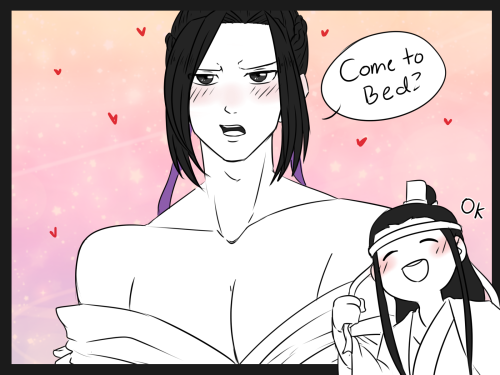 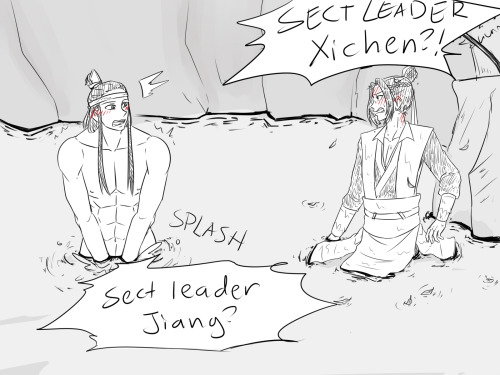 Jiang Cheng’s responses to a confession:

Lan Xichen: I love you.

Jiang Cheng: You can do so much better.

Lan Wangji: I love you.

Nie Huaisang: I love you.

Nie Mingjue: I love you.

Jin Zixuan: I love you.

Jin Guangyao: I love you.

Jiang Cheng: A-Ling really likes you too! Speaking of A-Ling, I think that’s him calling, I should– yeah, I should check, just to be safe, you know? Anyway—

Wen Ning: I love you.

Wen Qing: I love you.

Jiang Cheng: I didn’t think I’d get this far to be honest… 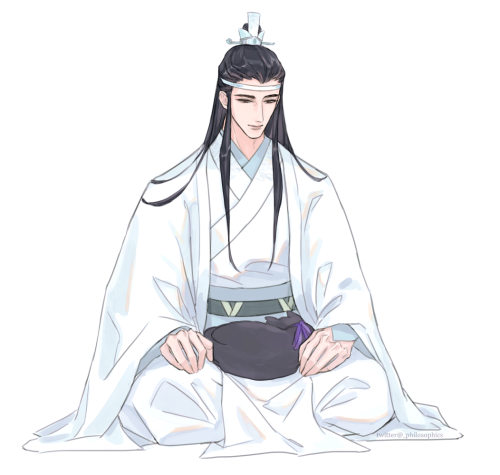 I need help finding a fic, it was about jiang cheng like getting reincarnated every time he comited the selfkill and then this one time he met lan xichen but he kills hum bcs he thought he was like a wen allie or something, help?

#jiang cheng, #lan xichen, #the untamed, #mdzs, #xicheng, #Help, #fanfic, #I really want to read it, #but i cant find it
4 notes · See All
sheepandpencilsText

Modern AU in which Jiang Cheng makes Xichen the best packed lunches, and all Xichen’s colleagues are endlessly jealous.

#xicheng, #mdzs, #jiang cheng, #lan xichen, #cql, #jiang wanyin, #lan huan, #the untamed, #jc for husband of the year thanks, #also i headcanon that JC is an excellent cook, #he learnt from his sister after all!!
138 notes · See All
toinfinityannnndbeyondText

During a conference being held at Lanling Jin, Jin Ling was being fussy and wanted only his jiu jiu. He cried for hours until the maids had no choice but to pull Jiang Cheng from the conference to help calm his nephew. Jiang Cheng holds a fussy Jin Ling in his arms, quietly singing him a lullaby, as he walks back and forth thru the quiet hallways. Jin Ling clings tightly to his Uncle, one hand tightly gripping his robe and sucking the thumb of his other hand. Lan Xichen was retiring for the day when he heard the most beautiful voice on his way to his room. He couldn’t help but follow the voice and to his surprised, the owner was none other than the sect leader Jiang. Lan Xichen couldn’t help but smile at the sight of Jiang Cheng being the most soft and paternal—a sight he never allows anyone to see. He doesn’t know if it was because of what he witness at this moment, or maybe he never paid much attention, or maybe it was the way the moonlight shined on Jiang Cheng as he sang a lullaby to soothe his fussy newphew…Lan Xichen couldn’t help think Jiang Cheng looked absolutely beautiful.

Day 22 of JC Love Month and Day 5 of Xichengfest bring some post-canon feels where Jiang Cheng fears everything is lost between him and Lan Xichen, but he didn’t count on Lan Xichen for this ;)

Jiang Cheng knows that after the temple, everything was bound to be different, but it’s really dragging on him by now. It’s not only that one of their most respected was revealed to be the actual worst—because that leaves the whole cultivational world floundering—but it’s all the interpersonal relationships that are broken as well.

He would have tried his hardest—in his own way—to mend the relationship with his brother, without realizing or acknowledging that Wei Wuxian doesn’t even want that.

So it really is better that he simply left, because that means less temptation for Jiang Cheng to fuck up that relationship even more.

Jiang Cheng isn’t quite sure how Jin Ling is feeling with everything that’s been revealed, because he’s been sequestered in Jinlintai and Jiang Cheng wasn’t yet allowed to visit. The moment his nephew asks for help though, the moment word reaches Jiang Cheng that Jin Ling needs him he’ll be there, no questions asked.

Jiang Cheng really wonders who of them sinned that much that Jin Ling got a shitty family like them.

Jiang Cheng isn’t actually sure what Nie Huaisang is up to these days, but he thinks he’s sitting in the Unclean Realm and enjoying his plot-free life for once.

He wonders if Nie Huaisang will come by, now that his almost decade long revenge plan is completed, and he finds that he would actually like that.

Jiang Cheng never understood why Nie Huaisang kept his distance after Nie Mingjue died—especially since Jiang Cheng could have helped with the suddenly thrust into power thing—but now it makes sense.

A very short story especially for day 21 Jiang Cheng Love Month 2020, which came to my mind right after I read the topic.
Let’s just say that I tried to make this story emotional, and at the same time mildly warm.

XichengFest Day 4: from enemies to lovers

Brief explanation: Lan Xichen as Emperor of the Roman Empire and Jiang Cheng as leader of the united Germanic tribes.

You see this war? 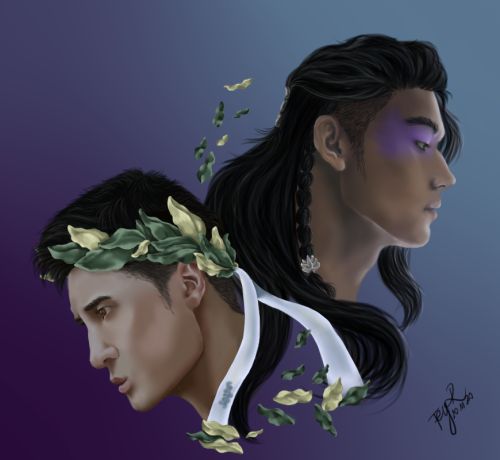 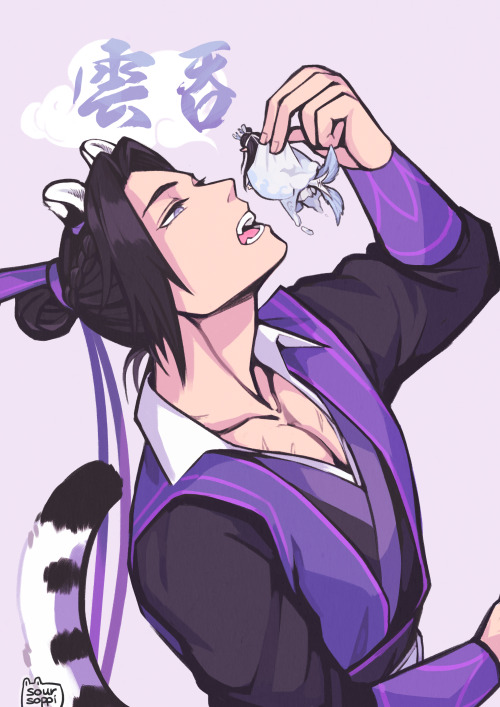